Every so often, I like to do an Art Swap with someone whose work I like. This week, I arranged one with Ben Cameron - better known as Strange Paul. What we agreed on was me doing a version of one of his characters - 'Fox in Man's Clothing'. Anyhow, I thought I'd share the journey with you all and show you how I work. First of all, here's the original by Ben Cameron: 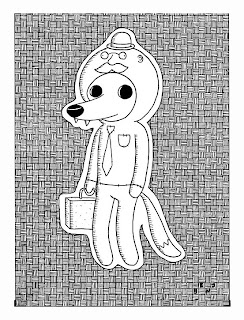 Great isn't it? I wanted to do it justice and retain the same fun feel of the character but in my own style. I started with some doodles. Here's a page of them from the sketchbook: 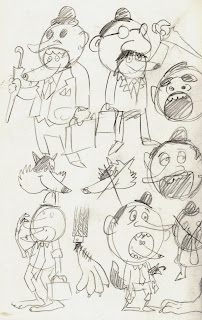 I then left it overnight and returned to it next day. Ten minutes into the drawing I realised that I'd made the incredibly stupid mistake of drawing a man in a fox suit. Duh. Undaunted, I finished it off, smudges and bad feet and all: 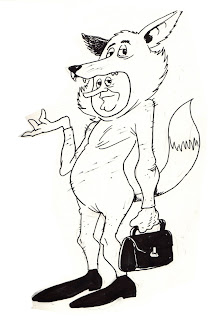 So I then did two more sketches and felt I was getting closer. However, one looked too much like a wolf and the other looked too human in body shape (Note that I had to write 'Fox in Man's Clothing' as a reminder not to balls it up again): 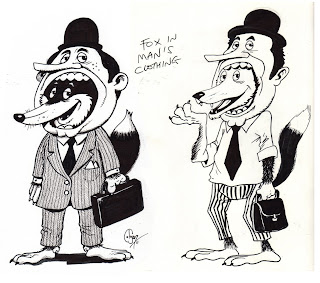 This led to the final version, which, I'll admit, I'm not unhappy with. Except I wish I'd drawn a breast pocket with a pen in it. 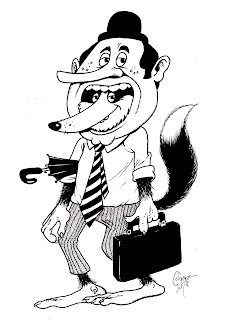 Now I have to wait and see what Ben has drawn for me as part of this Art Swap. His preliminary sketch scares me ... that is me dressed as a cow, right? 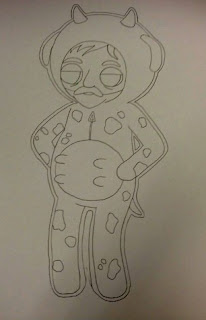