Jack the Ripper away in a Manger 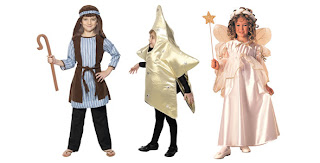 My grandchildren - aged 6 and 5 - have both scored half-decent roles in their school Nativity plays this year. One is a shopkeeper and the other is an angel. However, some of their friends weren't quite so lucky. Among the shepherds, wise men, Mary and Joseph, sheep and cows there's a child who is playing the stable door.

In the spirit of 'inclusivity' that is foisted upon teachers these days, no child - no matter how inept or undramatic they might be - can be left out. I guess it's better than how it was in my day when the dullards got nothing and the divas got everything. But a door? It got me wondering what other strange roles teachers have created to ensure that all of the kids get something meaningful to do during school productions. So I asked around and heard some amazing stories. Twitter was a particularly fecund source of anecdotes, some quite tragic.

@the_lady_sybil told me that she'd been the 'glamorous assistant' to a quoit thrower played by a kid called Wayne. To do this she was forced into a green leotard and, in her words, 'I wasn't a skinny kid'. Ouch.

Poor Ally Craig told me a tale that brought a tear to my eye: 'Being unable to walk, they made me Santa in the school play. They built a chimney around me and sang When Santa Got Stuck Up the Chimney.'

Trina Wright got to play the mirror in Snow White but, in a moment of exquisite torture, discovered that she'd have to tell the girl she hated most in school how pretty she was.

The winner for sheer pathos however is Michael Moran who had to dress as a duck for a school play. This entailed getting dressed up at home and travelling 11 miles to school. Alone. Dressed as a duck.

Among the more curious inanimate objects people were asked to play, I heard that Gary Hills had played a leaf, @cosmiclaire played a hailstone, Damon Shaw was the Moon and @bamberries was, on separate occasions, required to be an ant and a milk bottle. Several people recalled being animals or parts of animals or Christmas puddings. And @shanisolly once had to dress up as a Space Invader in a Waitrose cardboard box costume. In a Nativity.

Not that the traditional Nativity is a stranger to introducing new characters. @svmitchie was once asked to play 'a woman who wanted to shop at Harrods instead of giving money to a homeless man - hard hitting stuff for a six-year-old.' Meanwhile, Simon Johnson was a 'welly wanger' - one who chucks Wellington boots - but had to do it with a haggis instead. Mo McFarland was a Hula Girl and @grumly_grimly once played 'Optional spear carrier' (?). But the prize must go to @mr_Geoff who played Jack the Ripper. Apparently, the Nativity that year was loosely based on A Christmas Carol and one possible future for the star was likely to be a trifle visceral and grim. Extraordinary.

Do you know of a worse or more bizarre role? Do let me know.
Posted by Stevyn Colgan at 16:15