We did our first Oxford-based Unbound Live this evening. Tremendous fun as always and a lovely audience at The Jam Factory - the old Frank Cooper Marmalade Factory. MC for the evening was the inimitable Mr John Mitchinson seen here in all of his hirsute glory. 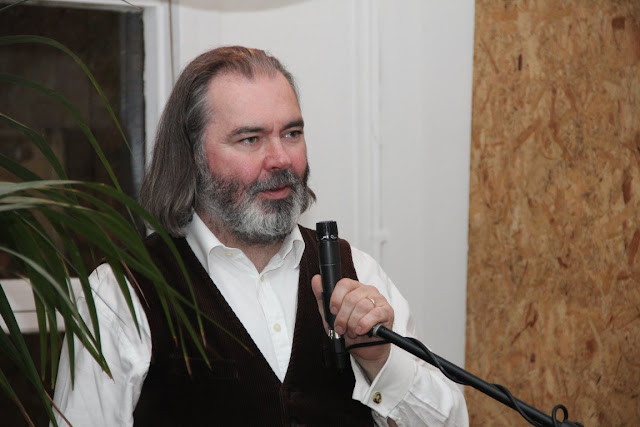 Our first reading and book pitch came from Kevin Parr whose darkly comic tale of birdwatchers and murder - The Twitch - is currently 70% funded. 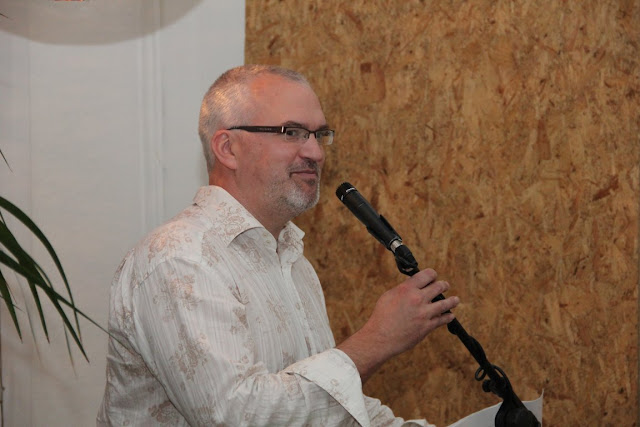 Then came Lisa Gee with her usual spirited sales pitch for Hayleyworld, her biography of a forgotten bad poet and rubbish horseman. 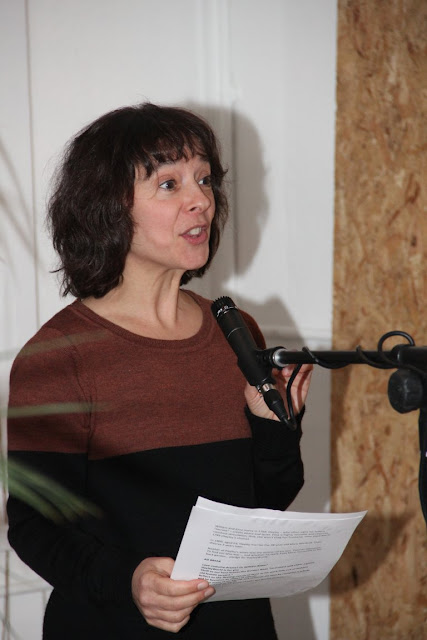 Next up was E O Higgins whose comic mystery novel Conversations with Spirits is currently 48% funded. 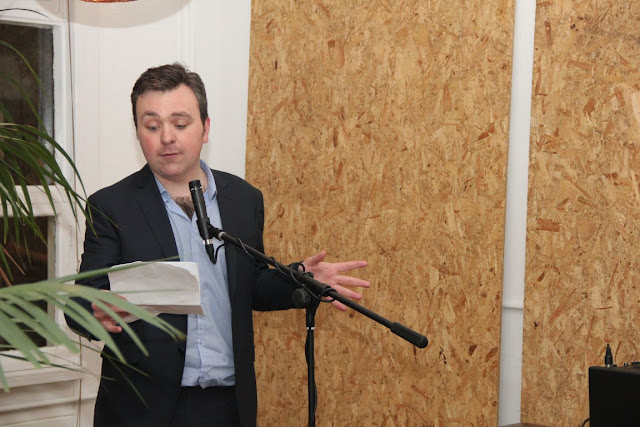 And to round off Part One, Katy Brand read us some extracts from her very funny first novel Brenda Monk is Funny. 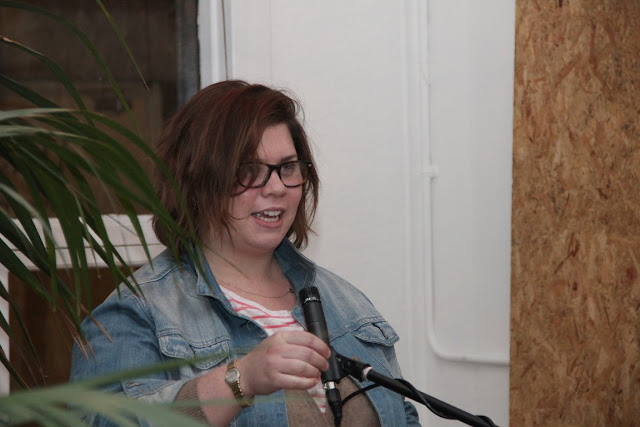 Part Two kicked off with Keith Kahn- Harris telling us about his continuing efforts to find big fish in small ponds - The Best Waterskier in Luxembourg. 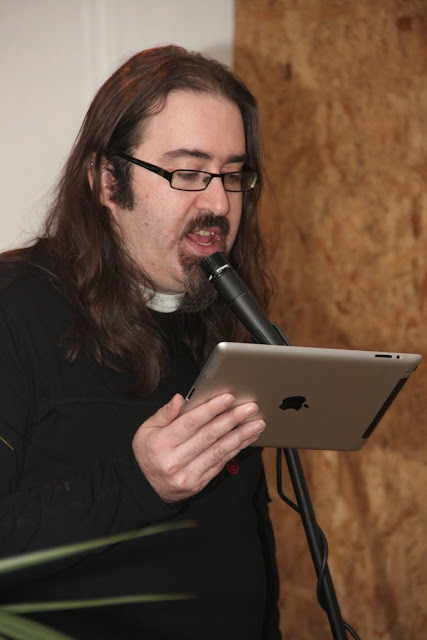 Then it was yours truly. We were told to keep our pitches to eight minutes. So I wrote a talk all about what you can do in eight minutes. You can read it in my Unbound shed here ... but only if you're pledging on my book! 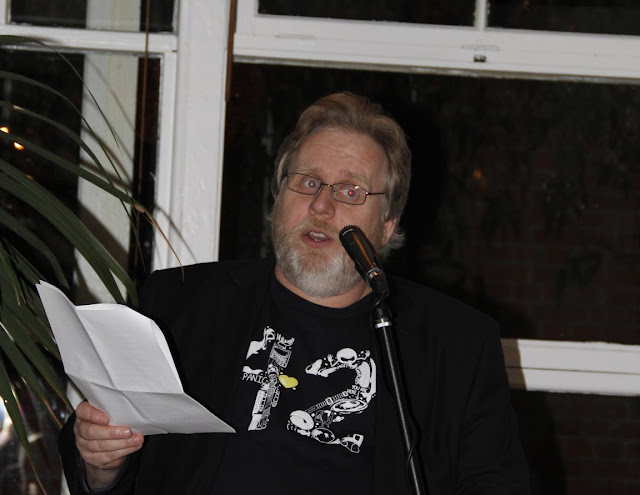 Penultimately, Robert Llewellyn read us some exclusive extracts from his sequel to News from Gardenia, his utopian sci-fi novel ... 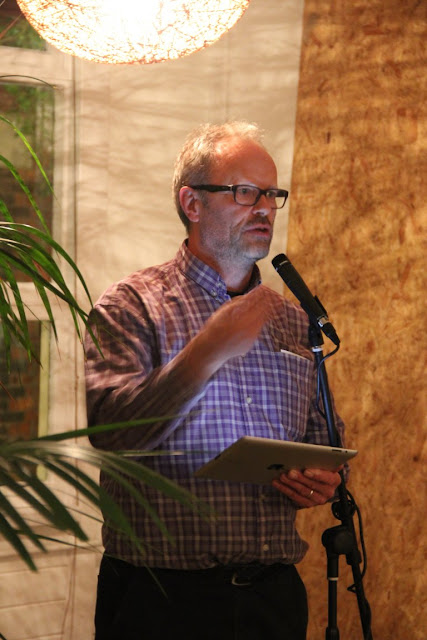 ... and George Chopping - performance poet extraordinaire - rounded off a splendid evening with his usual gusto, reading new poems and some from his published collection Smoking with Crohn's. 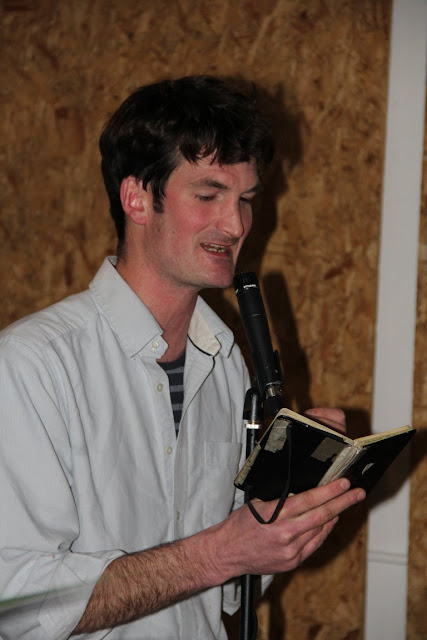 An Interview of Curiosity

Here's a little interview done a year or so ago by m'colleague Dan Schreiber - co-creator of The Museum of Curiosity - with m'boss, the legendary John Lloyd.

And, as a little bonus, a great talk by John and fellow QI founder John Mitchinson: The A-Z of QI. Enjoy!

Posted by Stevyn Colgan at 23:13 No comments:

An amazing set of composite portraits of parents and their children made by taking photographs of them in the same position (and same clothes) and then hand-tearing the prints to overlap and merge them together. Photographer and artist Bobby Neel Adams (website here) created the project to highlight genetic features that pass from one generation to the next.

See more here.
Posted by Stevyn Colgan at 14:13 No comments:

This is pretty cool: astronomer Alex Parker took all the planet candidates found by the Kepler telescope – nearly 2300 planets in all – and made an animation showing what they would look like if they all orbited one star.

Dr. Parker had to do some scaling to make this work. For example, the actual size of each planet is known relative to its parent star, which he then scaled to fit the star shown in the animation. He scaled the distance from the star in a similar way. He describes it all on the page for the video.

(Via the Bad Astronomy blog)
Posted by Stevyn Colgan at 13:49 No comments:

The Museum of Natural Curiosity

Note: These photographs are rubbish and were taken without flash on my crappy phone. They will be replaced with better shots as I get them in.

Last night we staged our first ever properly live Museum of Curiosity at London's Natural History Museum. I say 'properly' as the BBC radio show is recorded in front of an audience so, technically, that could be called 'live'. However, the radio shows don't usually get broadcast until a month or so after they're recorded so there's time to edit, tweak and to make them as good as we possibly can. This was a 'proper' live event in that what you saw was what you got; there was no such safety net. I think it's fair to say that the audience got something very special indeed.

We couldn't have hoped for a more sparkling panel of guests. The radio show normally has three guests and lasts for half an hour. This has always been something of a frustration as each guest is fascinating enough to devote half an hour (or more) to. In fact, we usually record two hours' worth of material and it's absolute hell for producers Rich Turner and Dan Schreiber to have to whittle it down to just 30 minutes and to lose so much good stuff that never makes it to air. For this live show, however, we had no such restrictions and so we were able to put on two hour long shows featuring two amazing panels.

Part One featured comedian, writer and host of It is Rocket Science, Helen Keen, the museum curator's curator Professor Richard Fortey and the legend that is Sir Terry Pratchett. 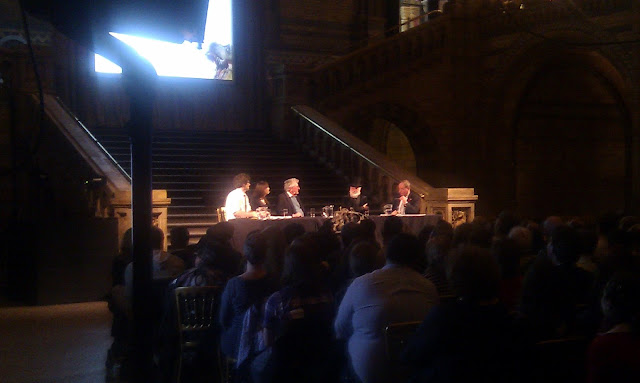 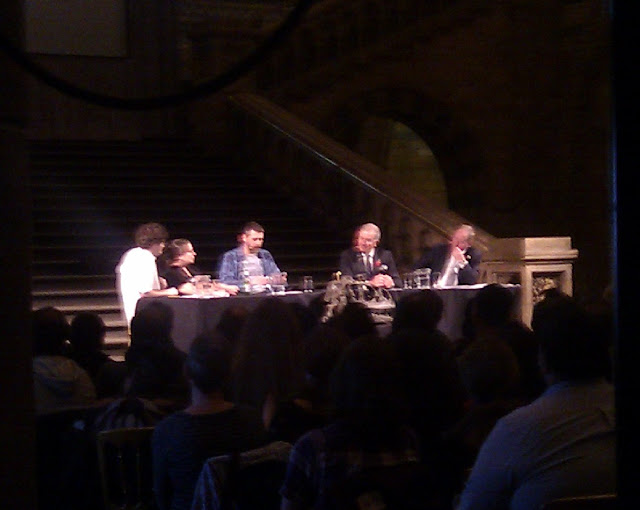 The show was steered brilliantly as ever by our boss, the legendary Mr John Lloyd, and by Dan Schreiber taking his first ever turn in the curator's hotseat previously filled by Jimmy Carr, Bill Bailey, Dave Gorman, Humphrey Ker, Sean Lock and Jon Richardson.

The show - staged in the cathedral-like main hall and punctuated occasionally by roars from Dippy the Diplodocus - ran from 7.30pm to 10pm during which the audience was treated to tales of monstrous 2 metre long millipedes, Superman's desk ornaments, the prehistory of Discworld, parasitic flies, the man who ate the heart of a king, Darwin's pet tortoise, Naval slang, cursed lockets, nefarious goings-on inside a whale, flying stick insect eggs, the Piltdown cricket bat and the seaweed expert who was mistakenly sent to Bletchley Park but who, by a twist of fate, ended up helping us win the war. Fascnating, hilarious stuff in the tradition of The Museum of Curiosity and our sister show QI. And the audience seemed to love it.

At 10pm 'The Museum of Natural Curiosity', as we'd called the show, had to come to an end but we still had a few more treats for those who could stay a little longer. Scientist, comedian and TV presenter Simon Watt - best known for fronting Inside Nature's Giants - did a very funny set about why we should stick up for ugly animals that don't get the same love as pandas and other 'charismatic mega-vertebrates'. And then comedian and TV presenter Eric Lampaert of How to Survive a Disaster Movie gave us 10 minutes of bizarre but brilliant stand-up on the subject of early Man. The evening was the rounded off with 15 minutes of Q and A with John and a selection of the guests: Helen, Erica, Dave and Alan. 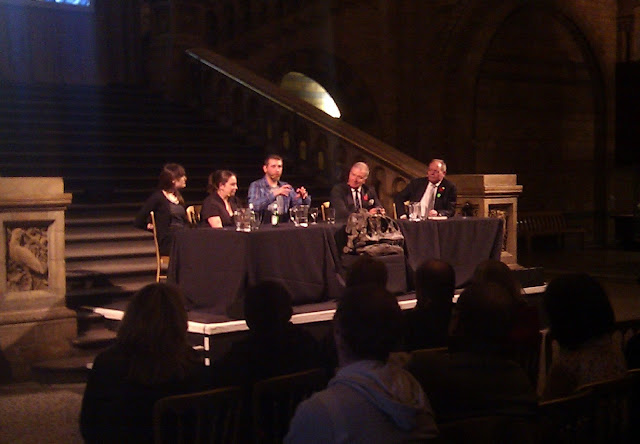 A wonderful evening spent with tremendous people. Will we do another one? I sincerely hope so.

Posted by Stevyn Colgan at 15:44 No comments:

Another crop of excellent entries for this year's competition. Every one who entered will get an original postcard doodle from me. Meanwhile, here are my Top 5 entries including the winner of the 'Dracula Doodle' prize.

At Number 5, we have this image from Louise Paddock. The theme was 'Your worst nightmare' and this was hers ... no being able to think what to draw for the competition. That tickled me. 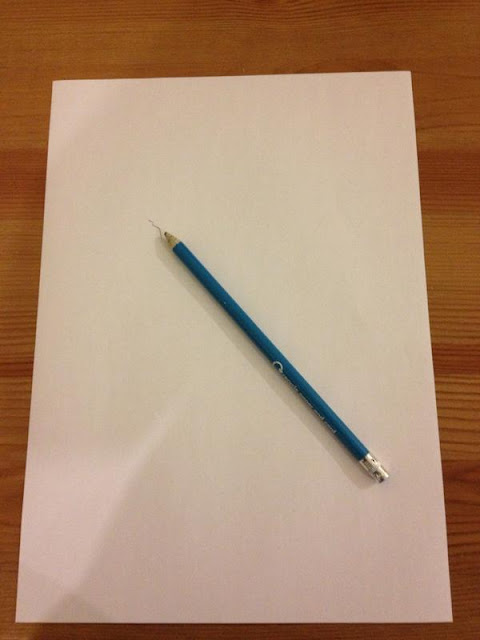 At Number 4, we have this creepy nightmare image from the mysteriously named 'Sausage and Egg' ... 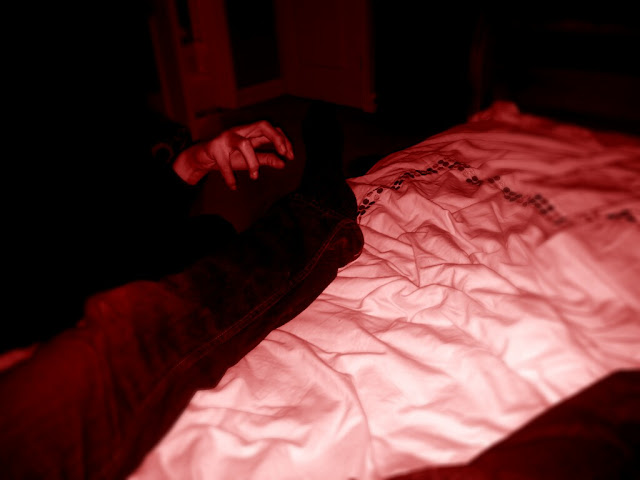 At Number 3 and in a similar vein, we have this drawing by Irene M ... 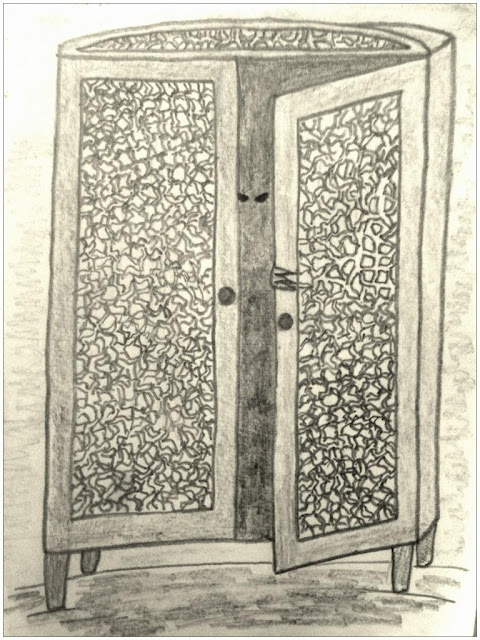 And at Number 2 this excellent little story board by Mo McFarland. 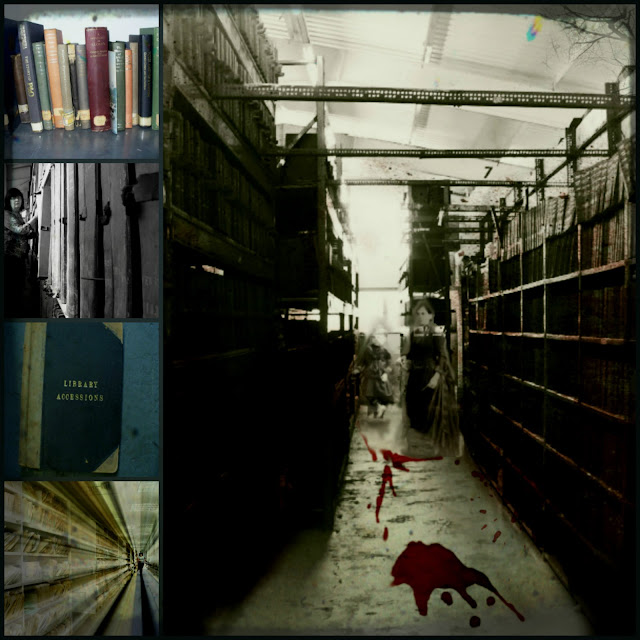 But top prize this year goes to this spooky piece by Mike Harman. 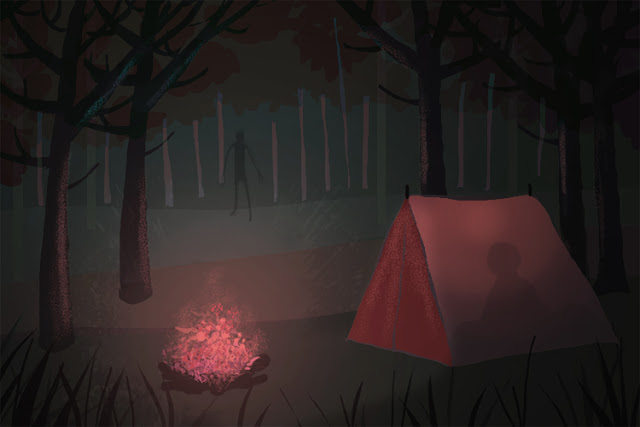 Thanks for taking part everyone! I'll be contacting you all to talk doodles and where to send them over the next few days.
Posted by Stevyn Colgan at 15:54 1 comment: