A quick scary self-portrait I knocked up in the wee hours of this morning using a free art program I got with a computer magazine (Paintshop Pro 6). It involves a photo of me, a shriner fez, some 3D glasses, a ping pong ball, a photo of some woods and some free texture layers pulled off the internet. Less than an hour later - voila! Click to see a bigger version (as if you'd want to). 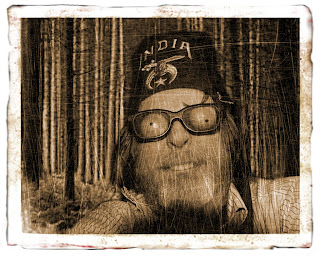 But don't be put off if you're not a digital photoshoppy sort of person. Remember that the postcards I want you to emulate were taken on old film cameras, some a century before computers came into our homes. It's all about the atmosphere, the clothes, the facial expression and, above all else, the sheer incongruity of some of the compositions. It's bizarre I'm after - the creepy comes as the natural consequence of getting the right level of weird. Most of those old photographs weren't taken to be funny.

And remember ... if you can't do the ageing/distressing/sepia-tone stuff yourself, I can. I can't wait to see what you come up with!