I cannot begin to tell you how much I have been influenced as a cartoonist by the wonderful Ronald Searle who, I hear, has died aged 91.
As a precocious, creative child growing up in 1960s and 1970s Cornwall, I was always looking for the next artist to copy and emulate; the next craftsman who would reveal some new technique or skill to improve what I myself could produce. By the time I reached my early teens, I'd discovered a handful of artists who would change the way I drew forever. They were Ralph Steadman, Arthur Rackham, Quentin Blake, Gerald Scarfe, W Heath Robinson, Arnold Roth and my two greatest heroes, Willy Rushton and Ronald Searle.

I would spend hours trying to get a bead on their effortless scratchy styles. My school library had lovely old bound copies of Punch magazine going back decades and I could always find artwork in there. Of course, I knew Searle's work from the opening credits of beloved St Trinians films and Those Magnificent men in their Flying Machines. But it was the books he illustrated that I loved the most. And none more so than those he wrote with Geoffrey Willans about Molesworth, Grabber, Peason et al at St Custards school. Down with Skool! and its sequels were just simply the funniest books I owned. I confess I bought them for the pictures and actually didn't read the text for the first couple of years. I still own them to this day along with many, many other Searle books. And I'm often to be found at the Chris Beetles Gallery in London oohing and aahing over the originals on display.

I'm not going to go off into a resume of his eventful life nor his contribution to illustration. Suffice to say, we have lost one of the greats. I'm just so pleased that he had a decent innings.
I'll leave you with physical evidence of my teenage besottedness. Here are three pictures I copied - line for line - off Searle in 1977 when I was 16. I was trying to figure out exactly how his penmanship worked and had even bought some dip pens for the purpose. I owe that man so much. 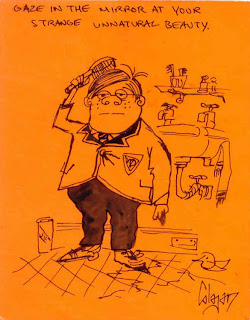 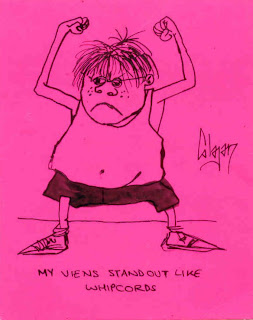 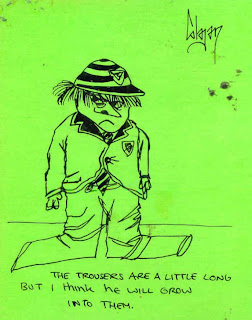 Do check out this excellent tribute blog to the great man.

My condolencies to the family and my grateful thanks to the great man for being such an inspiration.
Posted by Stevyn Colgan at 12:17