Looking for love? May as well use a telescope

I've previously discussed the subject of life elsewhere in the universe, at some great length, on this blog. For a quick re-cap, here's a piece I did on the Drake Equation and the Fermi Paradox. Here's an article on why we shouldn't be looking for life as we know it, and here's a an essay on the unlikelihood that any aliens we meet will be humanoid.

Looking through my folders of notes and articles today I found this story:

Love in London is as rare as finding aliens

'Peter Backus, a teaching fellow of economics at the University of Warwick, has calculated that he has a 0.00034 percent chance of finding love in the British capital using the same Drake Equation scientists use to determine the potential number of extra-terrestrials in our galaxy.
American astronomer and astrophysicist Frank Drake devised his namesake equation in the early 1960s.

The 31-year-old Backus -- who lives on a narrow boat in central London - is not even that particular about his ideal match, requiring only that she be a London-based female, aged 24-34, with a university education. 'I am not trying to be an elitist or anything, he said about his educational requirements. 'Everyone has preferences. I just think we would have more in common.' Further reducing his chances, he has estimated he would be physically attracted to just five percent of the women meeting all these criteria. This means there are about 10,500 women in Britain who tick all the boxes for Backus, he said - just above the 10,000 potential communicative civilizations that could exist in the Milky Way according to the Drake equation. So just 0.14 percent of Londoners and 0.017 percent of the British population meet Backus's own requirements, he said.

However, you also have to factor in the personal tastes of the eligible women too - a relationship takes two. If Backus's dream women are equally as fussy as he is, his chances of finding someone who will return his affections plummets to just 0.00034 percent. 'There are 26 women in the UK with whom I might have a wonderful relationship. So, on a given night out in London there is a 0.00034 percent chance of meeting one of these special people,' he said. 'That's a 1 in 285,000 chance. Not great'. 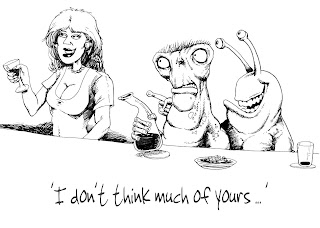 But love can still defy the odds right on your doorstep. Since writing his paper on the equations of finding love, Backus has started dating his neighbour, Rose. She meets his age requirement, has a university degree and also lives on a boat.'

Which means, I guess, that the universe is capricious and doesn't bow to mathematical probabilities. Against all the odds people do find love, people do win the lottery and maybe, just maybe, the universe is teeming with life.