I've finally hit upon a nice theme for my current run of paintings. I'd intended to do a series of British stereotypes but that was too wishy-washy a plan. But then, as I worked on the fisherman picture, it suddenly struck me that the fish looked more like pets than a catch. It looks like, out of shot, he's hugging them all together. They were ... The Fisherman's Friends! And suddenly I had my theme - popular British clichés, both as caricatures and the story of each painting. It was perfect. 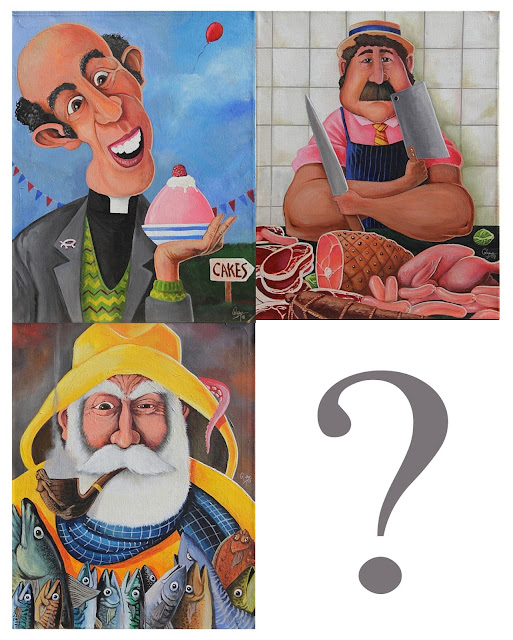 So, the set now comprises The Fisherman's Friends, Vicars and Tarts and (with the addition of a couple of sprouts), Meat and Two Veg. See how it works?

A Sniff of the Barmaid's Apron?

Policemen are getting Younger?

P.S. After I'd posted this, I suddenly realised that the first ever painting I ever did, back in 2010, was also a stereotype/cliché type affair. It was called North and South and it looked like this: 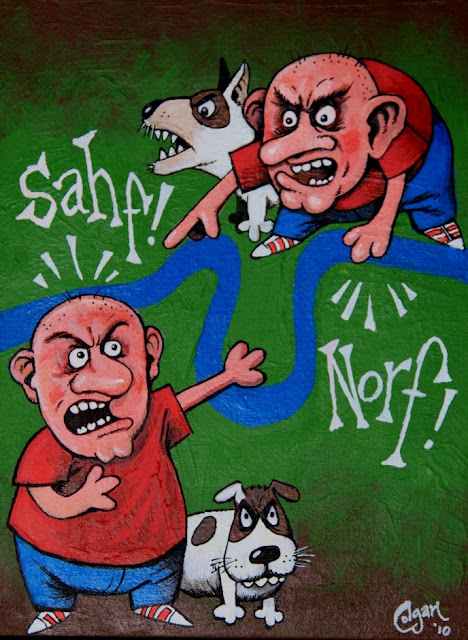 It was inspired by seeing two football fans shouting abuse at each other. What struck me as bizarre at the time was that they looked so similar - they could have been brothers (perhaps they were?). They were wearing different coloured football shirts; their team allegiance was the only difference between them. Had either of them been born in a slightly different part of London, they might have been best mates. It made me think about tribalism and there's no greater divide in London than that forced by the river Thames.

Interesting also to see how far my painting has come along in two and a half years. I was pretty bad, wasn't I? That's why I practice.
Posted by Stevyn Colgan at 17:32