Glasgow in a Day

It's been said that I'm some kind of masochistic workaholic. That's probably justified - I'm not known for doing much in the way of relaxing. The fact is, if I'm working, I'm happy because the work I do is what I love doing! For many years art, writing and speaking were hobbies; things I did for fun after work. Now they are the work and I can't get enough. Which is why, over the past eight months, I've been popping up all over the place. Yesterday that place was Glasgow. Yup, I travelled all the way there - six hours travelling - to do a two hour appearance at a Skeptics in the Pub meeting, and then spent another six hours coming home today. I'll admit to being a bit knackered but what fun it was.

The trip to Scotland entailed getting a train from High Wycombe to Birmingham Moor Street, scuttling across the street to Birmingham New Street, and from there to Glasgow Central. This particular route takes you via Lancaster, the Lake District and Carlisle and there were some moody, misty hills to be seen from the train window.

Arriving in Glasgow, I was delighted to see that my hotel, the Artto, was just a short walk from the station in Hope Street. The hotel was very nicely appointed, lovely room, nice staff etc. I was struck, however, by what appeared to be a crack and a smear of blood on my bathroom mirror. Eek! Of course, it turned out to be water damage to the rear of the glass rather than any indication that I was staying in a premises owned by the Bates Motel chain. 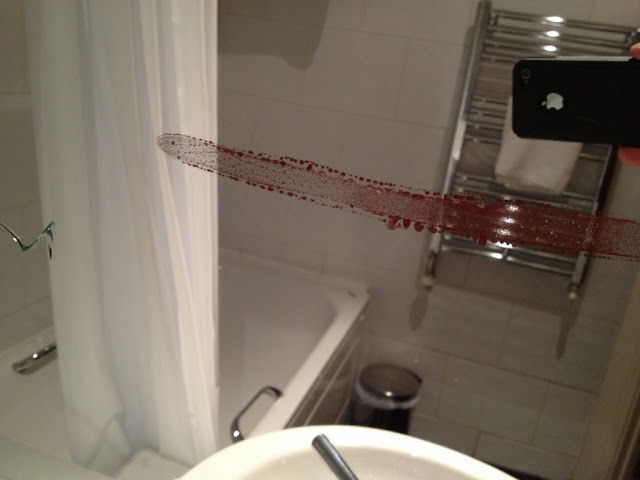 Anyway, as I say, lovely hotel. And, after a wash and brush up, I headed off to the venue for the evening's gig, The Admiral Bar in Waterloo Street. My route took me past the front of Glasgow Central Station and the wrought-iron glory of the Grand Central Hotel and its attendant tiny fireman. 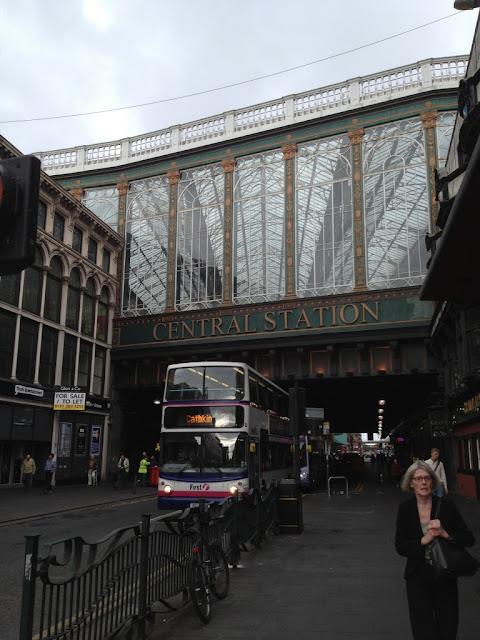 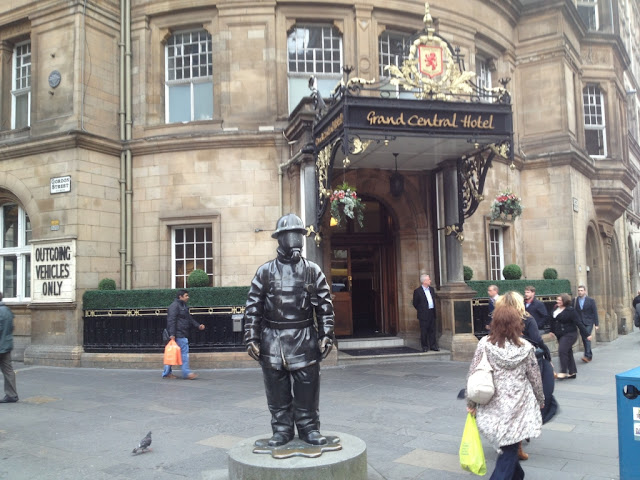 The height was the first thing that struck me about Kenny Hunter's 'Citizen Firefighter'. He/she seems, at first glance to be about five feet tall. But it is deceptive and the statue is actually about average male height. I've kind of got used to statues being larger than life, so this guy - erected in 2001 as a monument to Strathclyde firefighters past and present - is unusually human. In fact, for a short while, I thought it was a living statue performer. The fact that the statue looks like it could be anyone dressed as a firefighter means that, for me, it achieves its purpose perfectly. Of course, that doesn't stop the art critics from bolstering the work further. Here's what one website says:
'Citizen Firefighter was conceived primarily to celebrate Strathclyde Fire & Rescue. But it is also an attempt, through a recognition of their work, to reclaim the political and civic space associated with the historical form of the public statue. While maintaining the clear, formal language of the past, the content and narrative of this new work differs in many ways from the historical tradition, and it is precisely through this rupture between Citizen Firefighter and what is generally understood to be the impact of historical works that we can begin to assess what kind of relationship now exists between citizen and resident, between statue and sculpture. The space opened up in this way creates the possibility of a dialogue of historical and sociological change. Through the work's symbolism, Citizen Firefighter appears to rekindle the onlooker's reflexes when faced with a nineteenth-century public monument. It differs, however, by both the neutrality of its stance and by the prominence given to the breathing apparatus, which has a democratising effect on human identity. The generic or quotidian aspect of the figure is further accentuated by a reductive treatment of form, in which all naturalist or realist traits have been suppressed. Subtraction peels away pathos, creating enough critical distance to enable the viewer to consider the complex 'charge' inherent in the way the subject is presented. In this way the meaning of the monument itself is left partially open, thus creating a space that can be reinvested by the onlooker. This in turn prompts us to come to terms with our own responsibility, not only as an onlooker, but also, more importantly, as a citizen'.
So now you know. That may very well have been what Kenny Hunter intended in creating the piece. But I rather suspect that the public, if they notice it at all, see a tribute to the selfless bravery of firefighters rather than any 'generic and quotidian aspect'. I then went on to the venue to do the gig, which seemed to go down well with my audience. 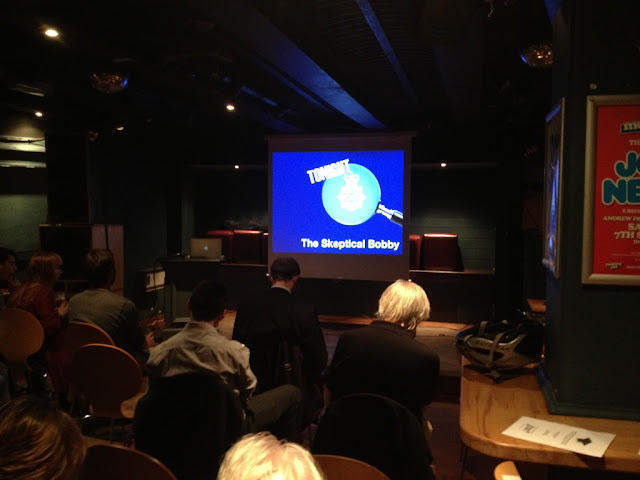 Afterwards, I had an ample intake of Deuchars IPA, a great chat with Ewan Hoyle (and his mum) and organiser Ian Scott and his band of brilliant critical thinking chums, and one of the worst battered sausages (from a nearby chippie) I've ever had the misfortune to attempt to eat. I crawled into my hotel bed at 1am and slept as well as any man can sleep with windows that don't open and a log of batter in his tummy.
Next morning I was up with the starlings - Glasgow has three main bird populations: pigeons, herring gulls and starlings and they're all fucking noisy - and, after a fine breakfast I headed off to the Glasgow Museum of Modern Art or GOMA as it's known. My train home wasn't due to leave until 12pm so I had a few hours to soak up some culture and to try to walk off that damned sausage. Honestly, it was as if it had been coated in cardboard and then fried in sump oil. I'm still getting indigestion now.
My route took me up Gordon Street and into Buchanan Street. There's a lot of great architecture in the city and some quite curious statuary built into doors, roofs and architraves. 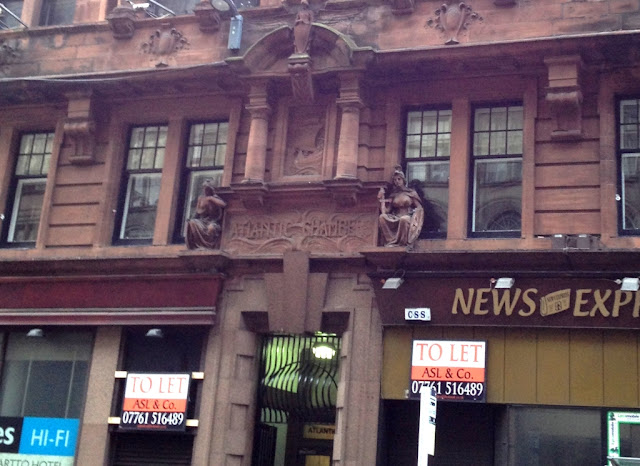 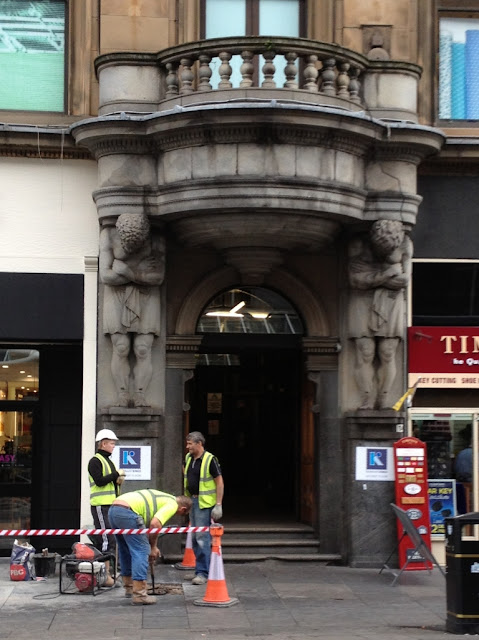 In Buchanan Street itself, there's an extraordinary piece of art nouveau built into the roof of the Princes Square shopping centre. It's a massive metal peacock, all twisty steel curlicues and chrome feathers, and metallic vines dripping down the façade. It's gorgeous. It's just a shame I can't really do it justice with these photos, captured on my phone: 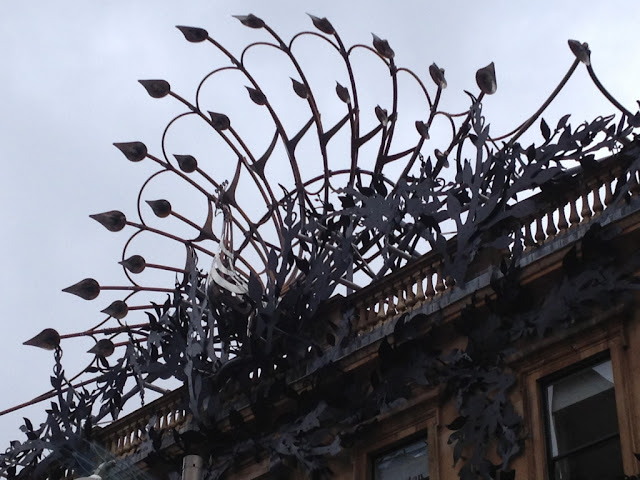 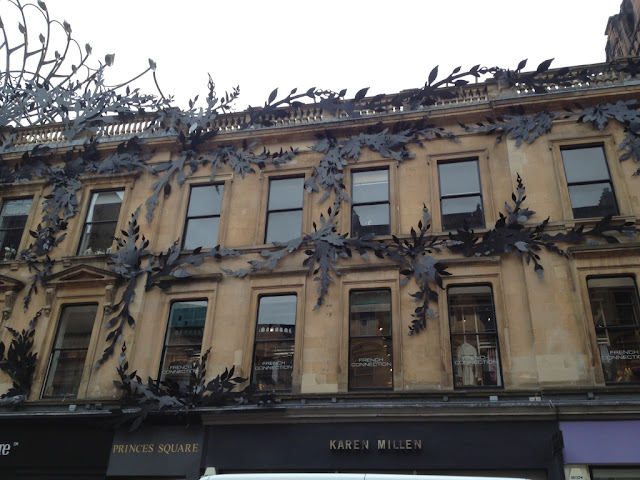 It's the work of Alan Dawson who, along with the Workington firm Shepley Engineering, and a team of traditional artist-blacksmiths, started the piece in 1987. In 1990 the peacock - a popular art nouveau motif - was unveiled as a contribution to the City of Culture Festival in Glasgow that year. It's made from coloured hand-forged wrought iron and steel with tail 'feathers' made from bronzed aluminium rods. It measures a colossal 10m high and 20m wide. As I said, glorious.

On then, past various shops and bistros celebrating the brilliant Glaswegian artist and designer Charles Rennie Mackintosh (and a TARDIS) and into Royal Exchange Square to visit GOMA. 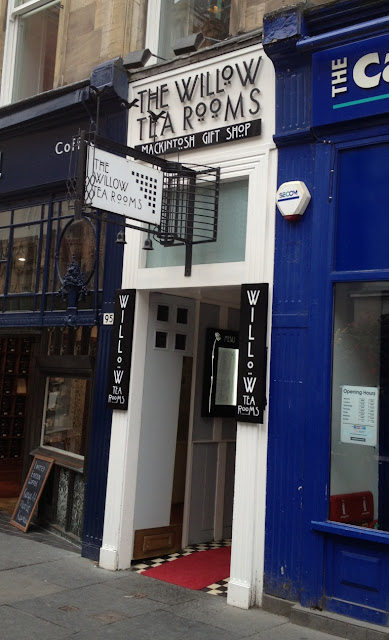 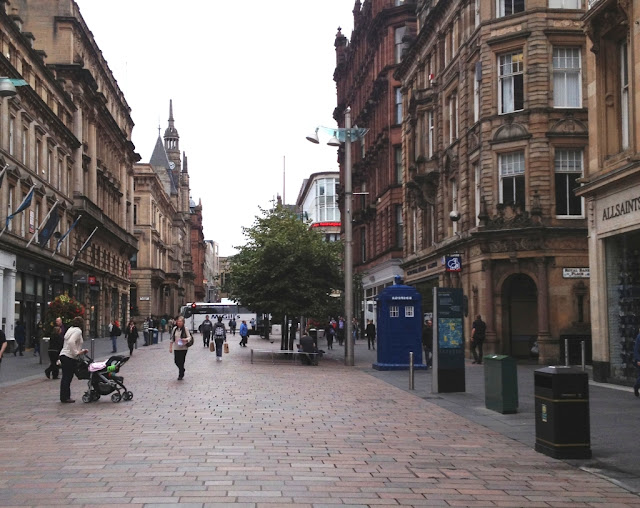 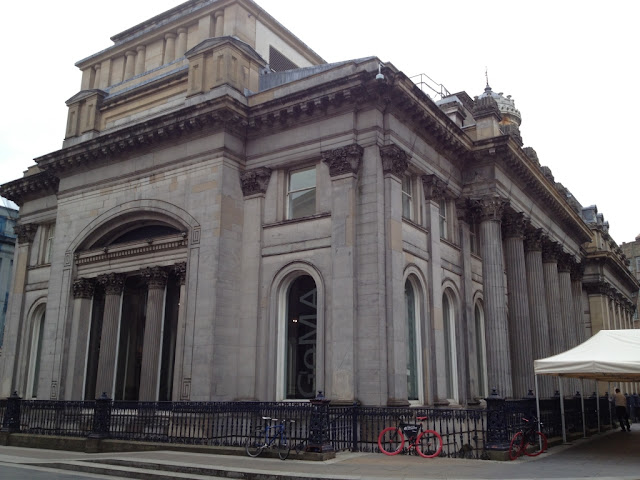 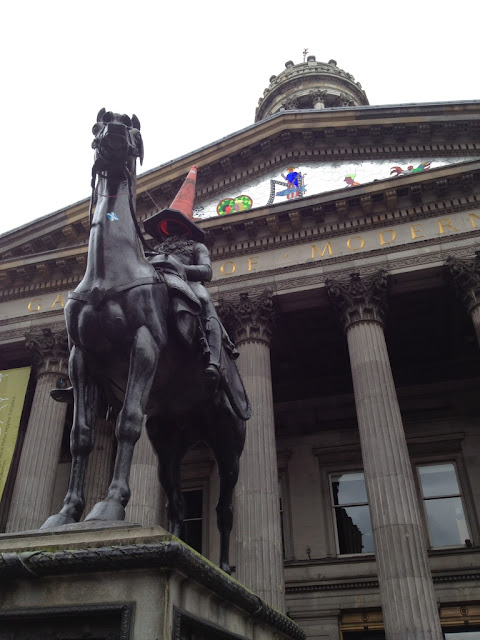 Ah yes, the iconic cone on the head statue of the Duke of Wellington (sculpted by Carlo Marochetti in 1844). For many years the authorities regularly removed the jauntily cocked cones, only for them to be instantly replaced. And, after a time, the cone came to represent he city's light-hearted attitude to authority and the city council left it alone. It now regularly appears in tourist guidebooks, and on posters, fridge magnets, T shirts etc. It's become part of the city's identity. During the Olympics last year, the cone was painted gold.
I enjoyed my look around the gallery and, in my next blog post, I'll show you some of the art I saw; what I liked and what I didn't like so much. However, it was soon time to catch my train and head home, this time with better weather and less moody views. 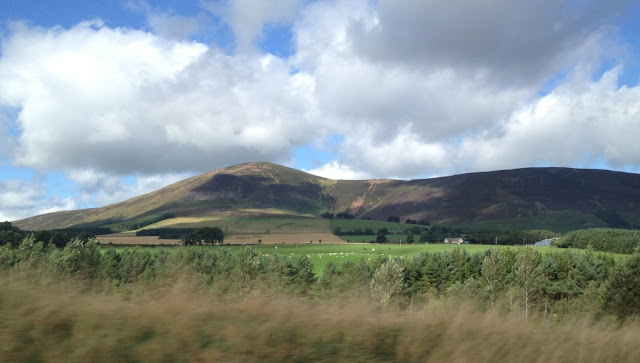 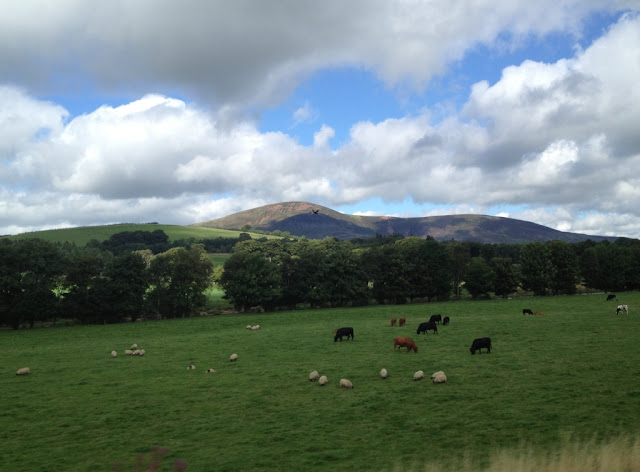 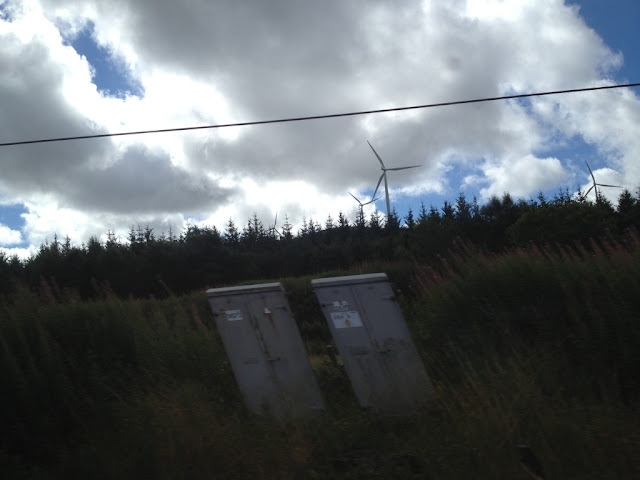 I like that last photo and how the speed of the train, coupled with the speed that the sensors in the camera register the image, has skewed the shape of those metal boxes.
A splendid, if tiring 'day out' to Glasgow. Pop back tomorrow and I'll show you some art that made me smile. ﻿
Posted by Stevyn Colgan at 01:30