My long weekend in Dublin began on Friday 13th with a morning flight from Heathrow. I don't believe in any superstitious twaddle but even my normally sceptical mind was challenged by the various obstacles put in my way, most notably the appallingly-sequenced traffic lights at the M4 interchange roundabout. I was stuck in a queue for over an hour. Thankfully, I'd had the foresight to book myself in online so when I finally got to the airport, I could do a quick dash - well, as quick as having to pass through security allows - to my gate. A pleasant and uneventful flight time of 50 minutes later (British Airways - I've never had a bad time with them) and I was in Dublin. And, contrary to expectations, the Emerald Isle was enjoying glorious sunshine rather than rain.

I've been to Ireland quite a few times and it's rained every time. I guess, like my native Cornwall, it's because it's the first sizeable lump of land the rain clouds encounter after their trip across the sea from America. It's like being on a long drive when you're desperate for a wee; you take the first opportunity you find to offload. But not today! All was sunny and warm and I booked into my hotel in the Liffey Valley and took a bus ride into Dublin city. 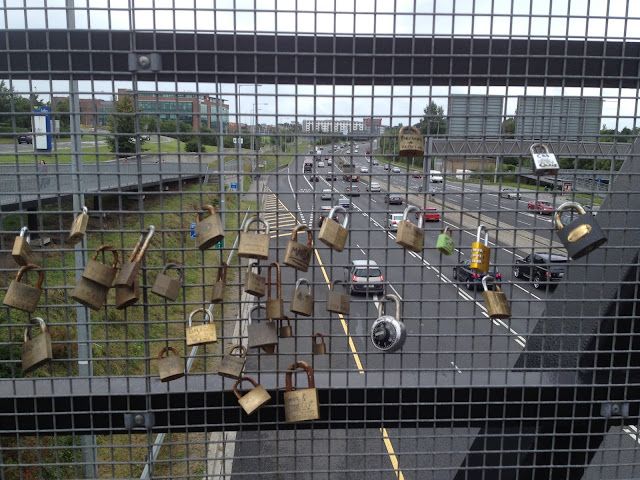 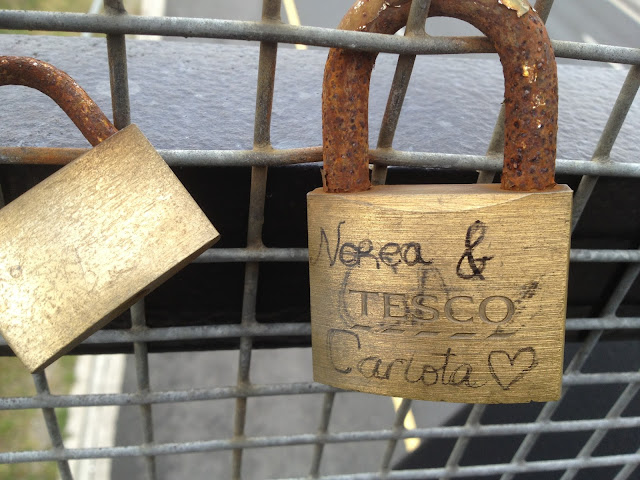 Something that seems to be quite common over there is the tradition of 'love locks'; leaving a padlock with your name and that of a loved one on display. These were all clustered on the footbridge over the M50 motorway that I had to cross to get to the bus stop. There must have been, at a quick estimate, about 200 of them all clipped to the safety mesh. Many had obviously been there for a while as they were very rusty and the names had been weathered away. 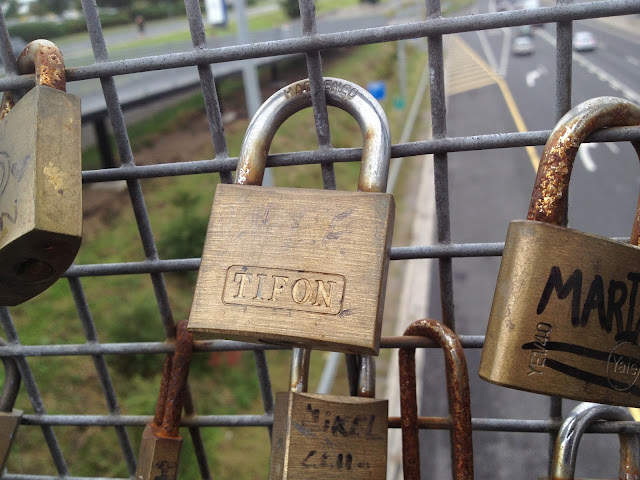 Arriving in Dublin, I decided to have a bit of a walkabout - or, at least, as much of a walkabout as I could stand with my still swollen and troublesome foot. I started off, as many do, in the Historic Quarter that takes in the Grafton Street and Stephen Street shopping areas and the more Bohemian Temple Bar area. 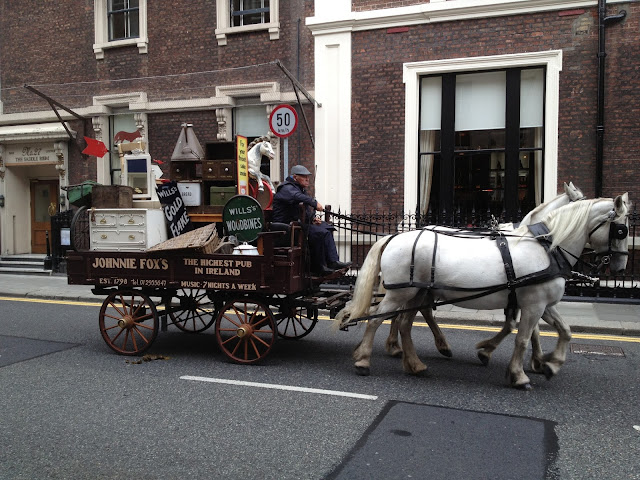 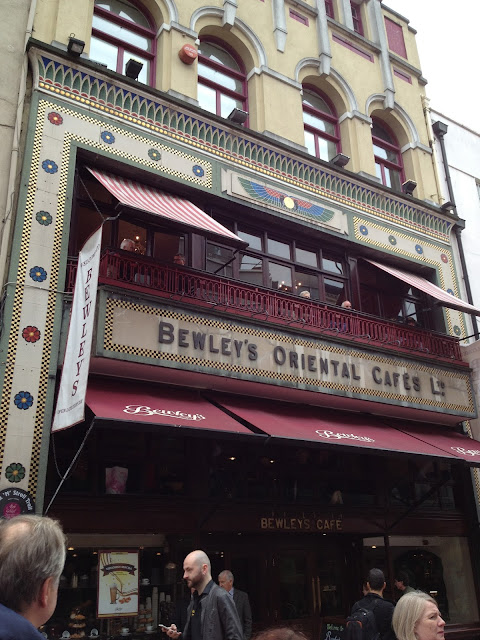 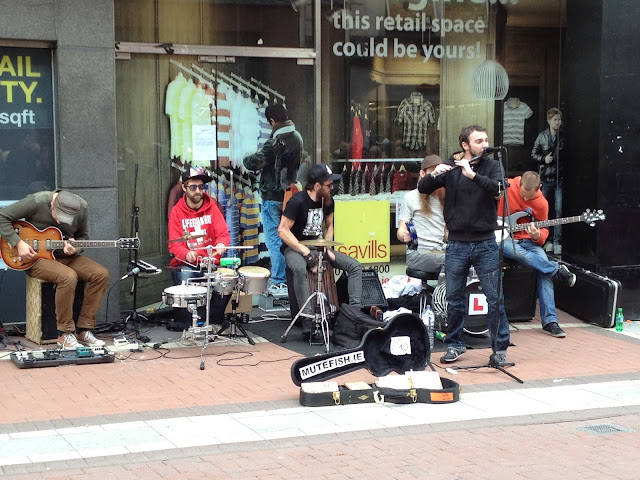 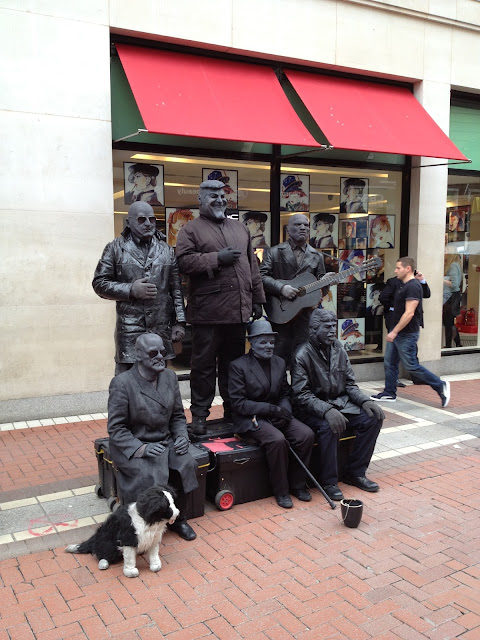 There were lots of street performers - live music, magic and living statues particularly - and this group (above) were great fun. The big shopping Centre at Stephens Green had a great art gallery - The Green Gallery - upstairs and I was much taken with the work of Dublin-based Jonathan Knuttel whose cartoony style has some resonance with the sort of work I do. Here are some examples: 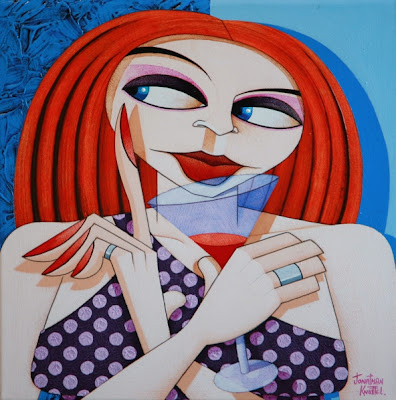 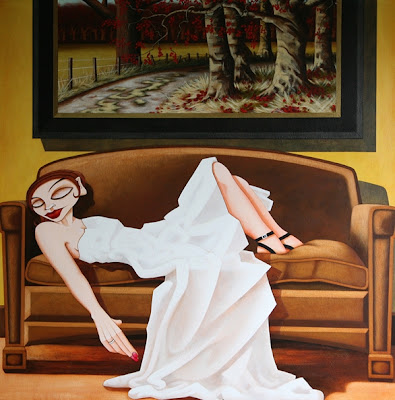 He's pretty popular - his larger canvasses, like those above,﻿ were on sale for €2,500 and even the smaller pieces were selling at €950. There's a larger one of his works at Dublin airport and he's handled by several galleries. I just loved the humour, the mix of paint textures and colours. You can see the textures more in this blow-up of Sushi by the Sea and one of his cat paintings: 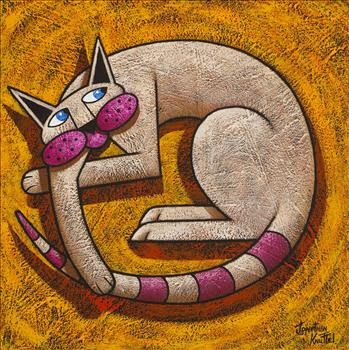 The shopping centre was also hosting a group of artworks by Frank O'Dea for Dublin Fashion Week. I couldn't help noticing that the central figure's hands were on the wrong arms. Bad installation or a prank by locals? 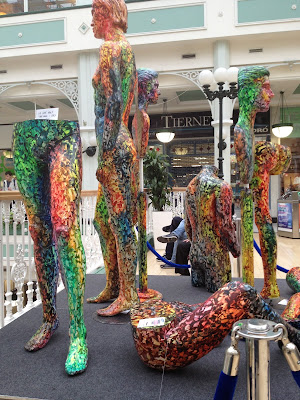 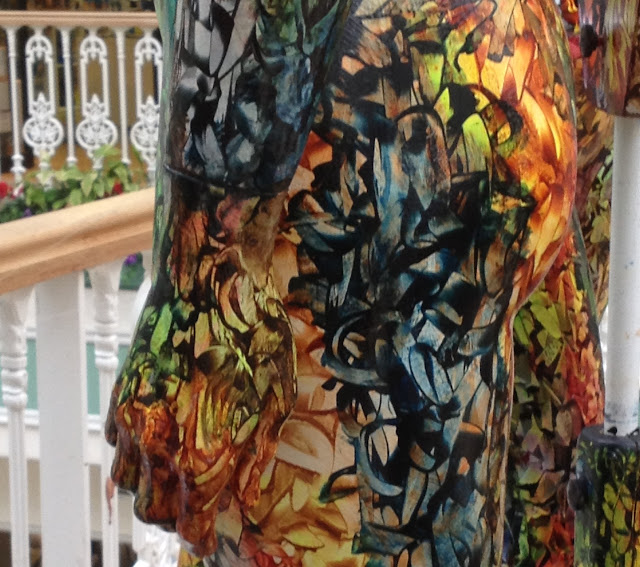 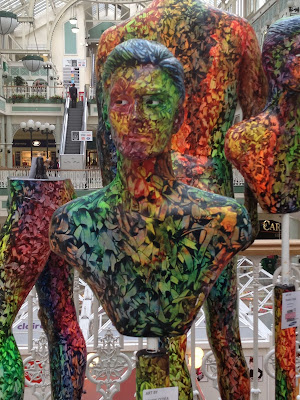 Then it was on into Temple Bar, which has lots of small art galleries, some great pubs and restaurants and plenty of live music. I had a good old wander about and then settled in at the Ha'penny Bridge Inn by the river Liffey for several pints of Smithwick's Pale. 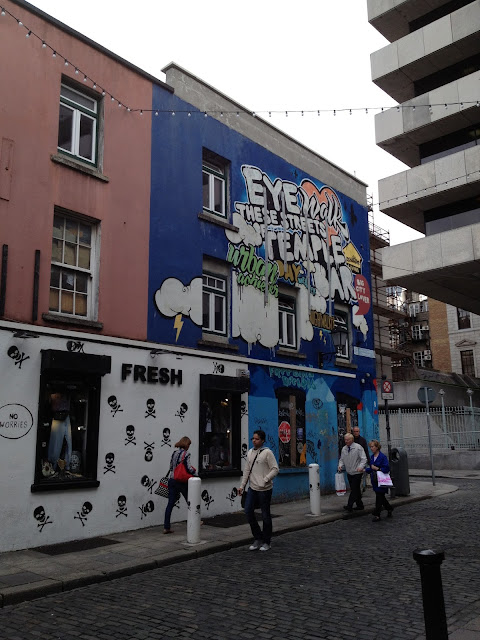 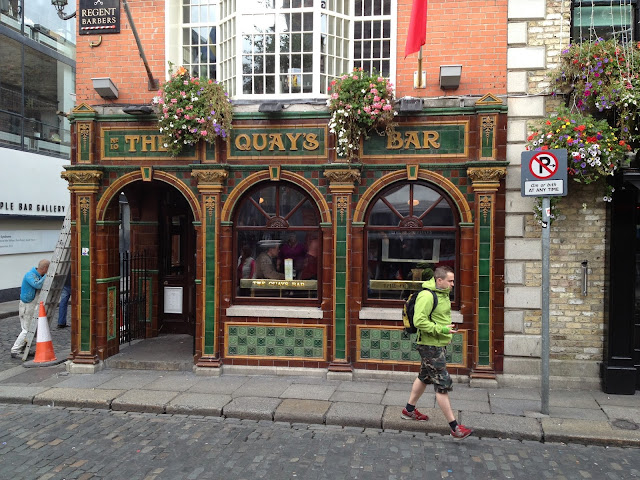 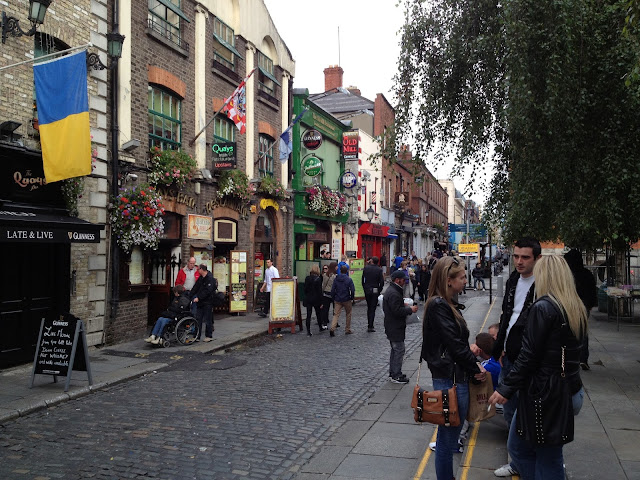 I bumped into New Zealand film director Danny Mulheron in the pub. He directed the 2012 horror comedy Fresh Meat and played the hippopotamus thing in Peter Jackson's Meet the Feebles, for which he was nominated for an award for 'best female character'. A really nice guy - we chatted for ages. Bizarrely, his best mate is the actor Mark Mitchinson, brother of my friend and QI colleague John Mitchinson ... who is also co-founder of Unbound, the publishers of my new book, which is all about curious connections. See? Everything really is joined up. 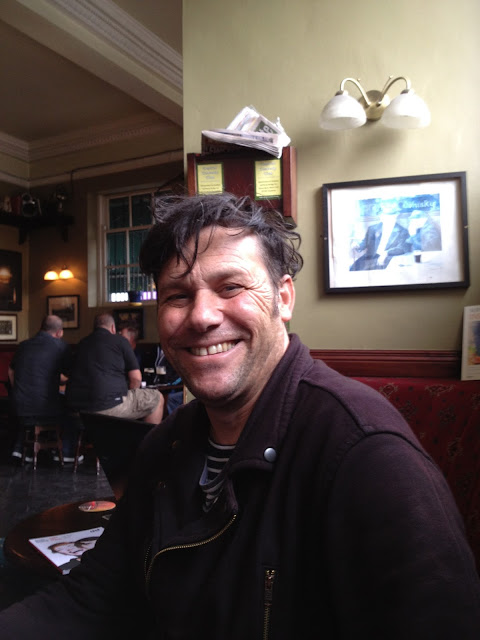 Incidentally, the whole 'love locks' thing I mentioned at the start is an issue in Dublin too as they keep appearing in large numbers on the many bridges over the Liffey; so much so that the council has been cutting them off for reasons of 'aesthetics and structural integrity'. Hmmm. More on the story here.

The day ended with a good meal at the Clarendon Bar and a last leisurely stroll around the city as the light faded. It's then, on the junction of Grafton Street and Suffolk Street, I came upon the statue of one of Dublin's more famous characters, sweet Molly Malone of 'cockles and mussels alive alive-o' fame. 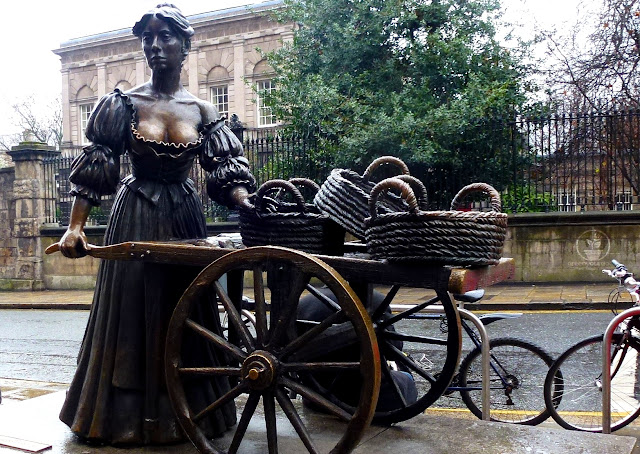 The 'Tart with the Cart' or the 'Dolly with the Trolley', as she's known locally, was sculpted in 1988 by Jeanne Rynhart and is nicely done although Molly's head is way too large for her body. Maybe it was to make her head larger than her breasts which are rather prodigious and fairly spilling out of her bronze blouse. Apparently, the justification for this is that 'women breastfed publicly in Molly's time, breasts were popped out all over the place.' Hmm. All I know is that they are shinier than any other part of the statue so I guess they get 'polished' a lot. Anyway, if you want to know more, you can read about Molly Malone here for starters.

So that was Dublin Day 1. Day 2 (Saturday) and Day 3 consisted of International Colgan Day (see previous post) and visits to Lucan and Dublin, including the Guinness Brewery. More of that next blogpost.

All photos (c) Stevyn Colgan bar Molly Malone statue which is (c) 'Paddy' of  Paddy's Wagon (because my twilight photo was shite).
Posted by Stevyn Colgan at 14:38