Hello there. How're ya?

I've just come back from a long weekend in Dublin, having been invited to attend International Colgan Day. Yes indeed, it was the first ever gathering of Colgans (as far as we know), organised by Colgan family expert John Colgan and hosted by the owners of the Lucan Spa Hotel, the splendid Mr Frank Colgan and family. 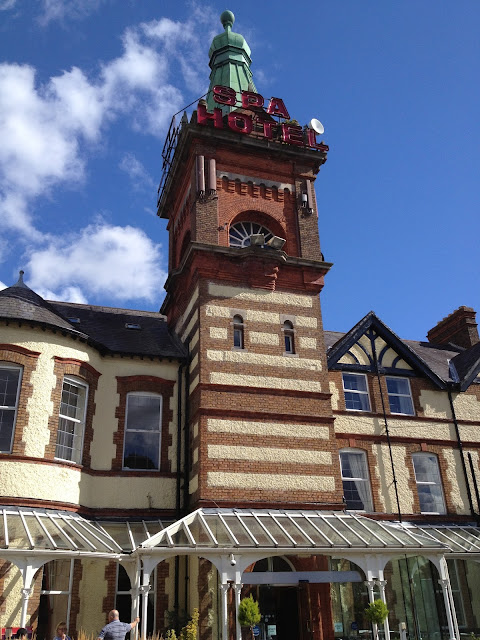 Now, when I was a lad growing up in Cornwall I didn't know any Colgans other than my immediate family of Mum, Dad, brothers Si and Andy, Grandad Ted and Nanna Marjorie. That was it (we aren't a big family). There were no Colgan cousins, no Colgans in the phone book (even we were ex-directory due to Dad being a cop) and the only other Colgan I ever saw was a sound engineer called Michael Colgan who occasionally popped up in the credits of things like the Mission Impossible TV series and the films Saturday Night Fever and Bring me the Head of Alfredo Garcia. The very fact I remember those credits is testament to the impact they had on me; it really was very, very unusual to come across a Colgan that wasn't living in my house.

And that situation has continued to the present day. I joined the Met Police in London - an organisation of some 45,000 staff - but I was one of only two Colgans on the email system and the other was a distant cousin. My local telephone directory only showed two Colgans. It really isn't a common name. When Jenny Colgan, the popular 'chick lit' and, recently, Doctor Who author appeared on the scene, it sent a little thrill up and down my spine. Here, at last, was a Colgan who was famous! I no longer felt that we were quite so obscure as a family.

So, you can imagine my excitement upon receiving John's kind invite. A chance to meet a whole gaggle of Colgans? (I'm not sure what the collective noun should be - a coven? A convention? A cuddle maybe?) I had to be there. And so, I flew to Dublin on Friday 13th to join the gathering. I hoped the date wouldn't prove inauspicious. 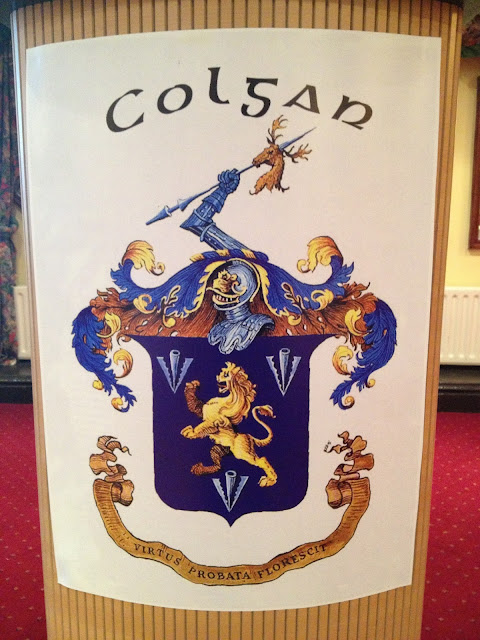 I spent the Friday kicking about Dublin - I'll reserve my pictures and thoughts about that for the next blogpost. But on the Saturday, I headed out to the little village of Lucan, north of Dublin, for Colgan Day which, after having received the itinerary from John, had now turned into Colgan Weekend. Saturday began with a meet and greet and proceeded with a series of Powerpoint shows with names like So you're a Colgan? and Notable Colgan People.

The talks were really interesting. I already knew that Colgan was an occupational surname and that the name meant 'swordsman'. What I didn't know is that the names Culligan, Quilligan and Cologan are variants of the same name (there are around 30 different spellings). There's a link to the word 'quill' too as the 'Col' of Colgan derives from the Gaelic 'Cuill' which means a blade shape, as in swords and, indeed, feathers. I also heard that the oldest written reference to a Colgan was from the 7th century and that he was the son of 'Coite the Destroyer'. That's pretty cool isn't it? In my mind's eye I see a character who looks something like Conan ... Colgan the Barbarian? 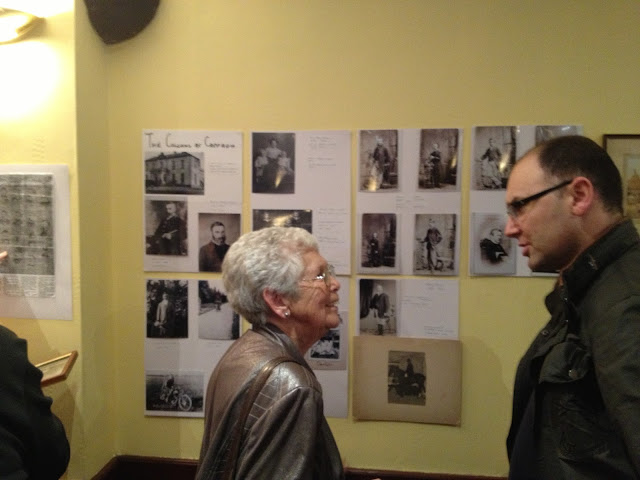 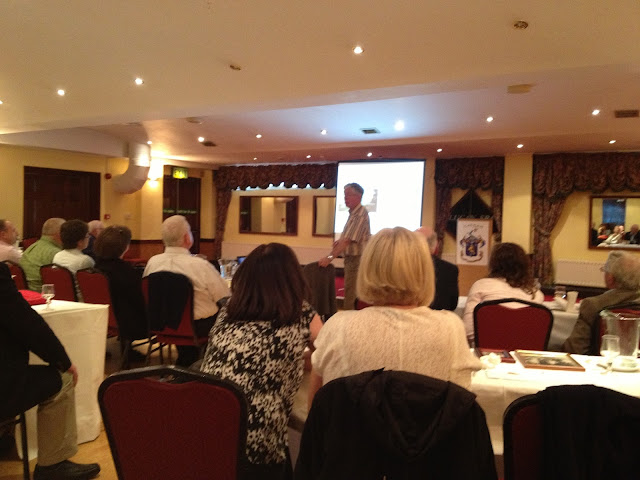 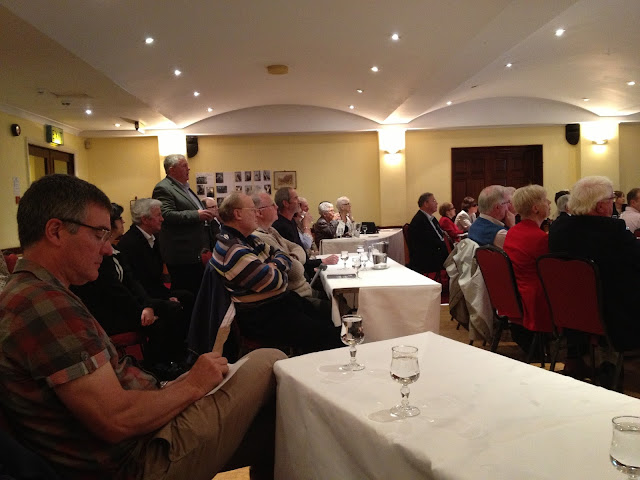 I also discovered that there is a Canarian branch of the Colgans based in Tenerife. In the late 17th century Juan Cólogan White (John Colgan White) followed the lead of many Irishmen looking for new horizons and business opportunities and ended up in the Canary Islands as they were well positioned for the shipping trade routes. He soon became a major player in Puerto de la Cruz, Tenerife (two streets are named after him), and sired a new dynasty. This is him: 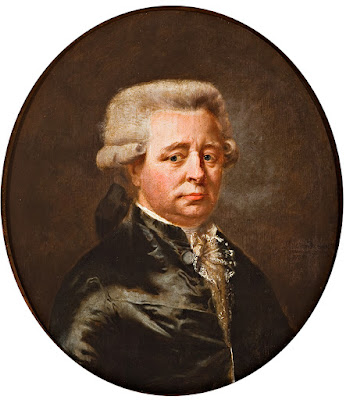 Eight generations later, Carlos Cólogan Soriano has researched and published a huge book on the subject. There is also a link between the Canarian Cólogans and Agatha Christie too. You can read about it on Carlos's blog here. We also learned about US Senator John Colgan, the rise and fall (literally in the case of Flights 9446 and 3407) of the Colgan Air airline, and about the town of Colgan  in North Dakota, USA. John was also able to show us the robes and regalia of Joseph Colgan, once the Archbishop of Madras (1886-1911). And then there was the huge contribution to natural history made by Nathaniel Colgan (1851-1919) who, among his many accomplishments, was the man who identified what shamrock actually is - either lesser clover (Trifolium dubium) or white clover (Trifolium repens). You can read all about it here.

Around 80 Colgans turned up for the gathering, some from as far afield as America and Canada. And it was fascinating to chat with many of them and to try to work out how closely they were related to me. The Colgans are mostly to be found around Dublin, Westmeath and Offaly but my branch begins with my grandfather Ted who was first a Sligo man, then Belfast before settling in Cornwall and founding the Cornish 'branch' of the tree. I couldn't find anyone connected to Ted although one of the Americans suspected that his father may have been my grandfather's cousin. It's something to follow up on. There are also lots of Australian Colgans. Sadly, the event was organised too late for any to travel over for it but there is a comprehensive self-published book in existence that details the Australian/Irish link called The Colgans in Australia.

I stayed for the morning but ducked out of the rest of the weekend. Saturday afternoon consisted of a walking tour of notable Colgan-related premises in Dublin. And Sunday was an organised coach trip around other Colgan-y residences in Kildare, Offaly and Westmeath including Lady Chapel and cemetery, Kilcock brewery, house and school, Cappagh House, Horseleap new RC Church, Moate Priory, Convent and private cemetery, Donore House and Ballyhast House. My foot is still not quite healed since my tumble in Edinburgh and I wasn't up for it, sadly.

Nevertheless, a fascinating opportunity and lovely to meet so many other people who share my name. It's the largest number of Colgans I've ever been with and will probably not be topped in my lifetime.

Unless they have another International Colgan Day of course.
Posted by Stevyn Colgan at 11:02