Replete with new facts and having sampled a surfeit of Colgans, I left the Lucan Spa Hotel at lunchtime on Saturday (Day 2) and decided to take a stroll into the village to get some lunch and a taxi into Dublin. I'm glad I did. Lucan is tiny and very pretty with a river meandering through it, beautiful thatched buildings and small public park containing more wasps and jackdaws per square foot than anywhere else on the planet. No, seriously. You couldn't look at any blade of grass without suddenly noticing a wasp. And the local jackdaws, which all have a curious genetic quirk in having grey bodies, black heads and wings, took the role of pigeons, scampering around my feet looking for crumbs as I ate my sandwich. 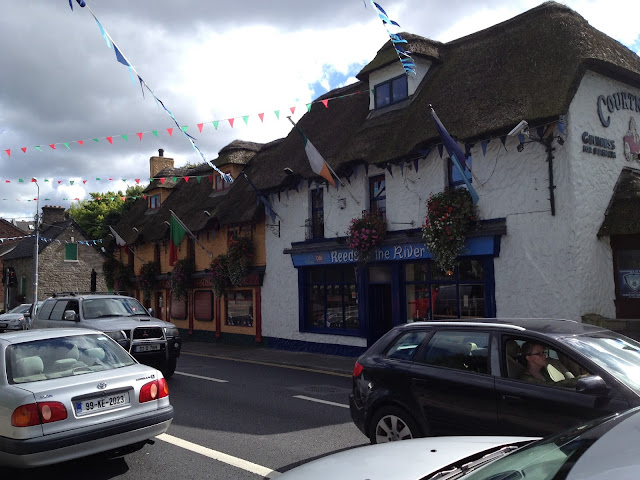 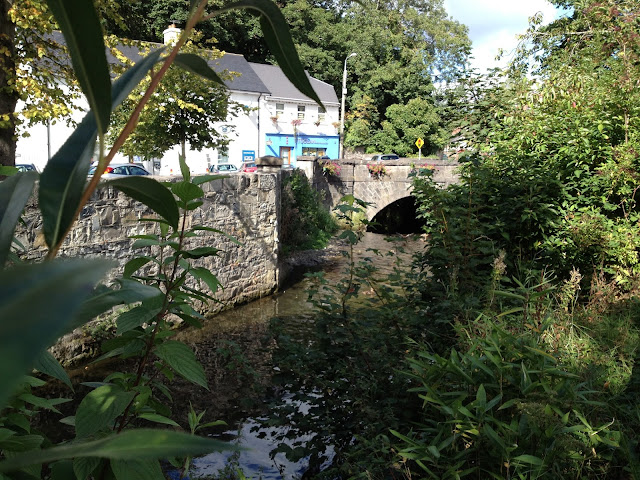 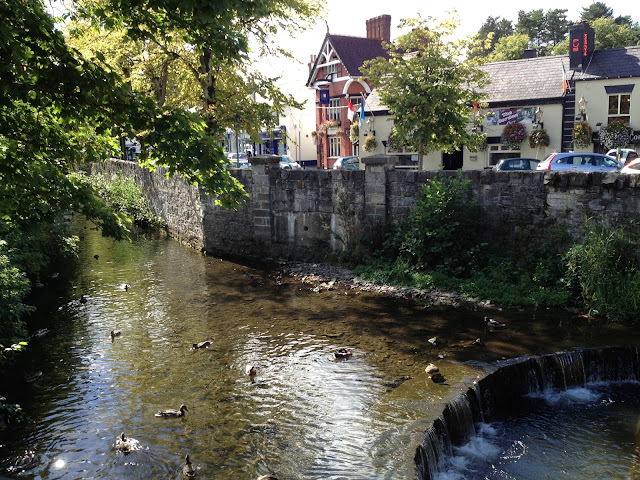 Lovely isn't it? But lovelier was yet to come. Talking to some locals, I found out that there was a weir just half a mile out of the village that was 'worth visiting'. So I did just that and wasn't disappointed. It was beautiful. And look at that Irish weather! I actually sunburnt my nose a little. 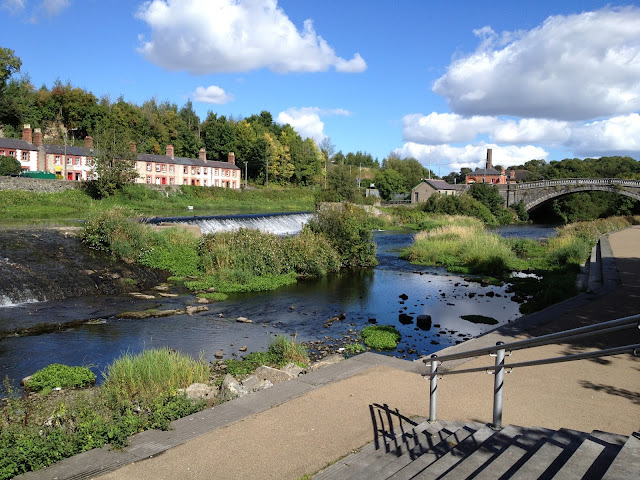 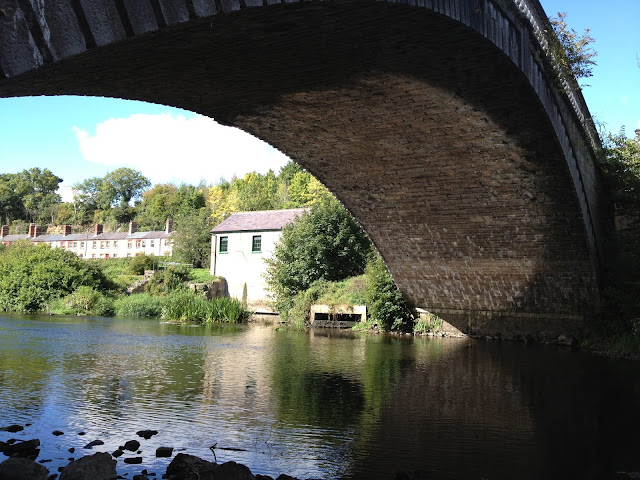 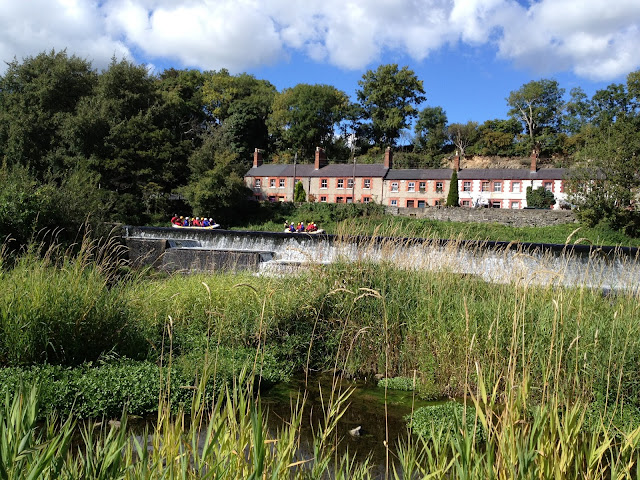 You'll notice a couple of inflatable boats in the bottom picture. As I watched, four of these boats turned up and faced the tallest watery slope on the weir. I assume they were on a team building day or such-like. All I know is that they whooped and hollered with joy and satisfaction as each boat came up to the lip, the people inside threw their weight forward, and they tipped over the edge. 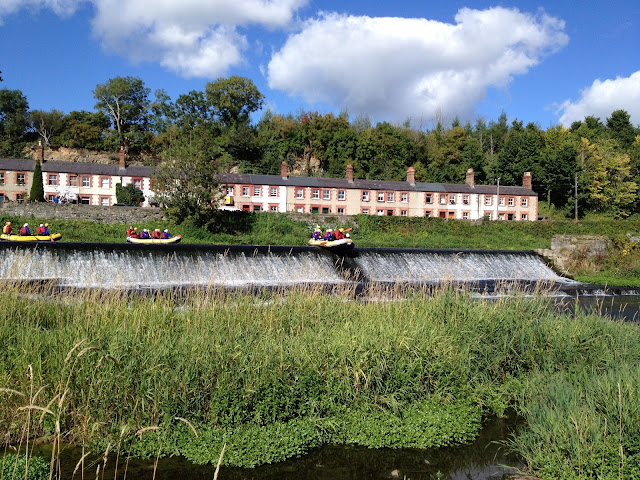 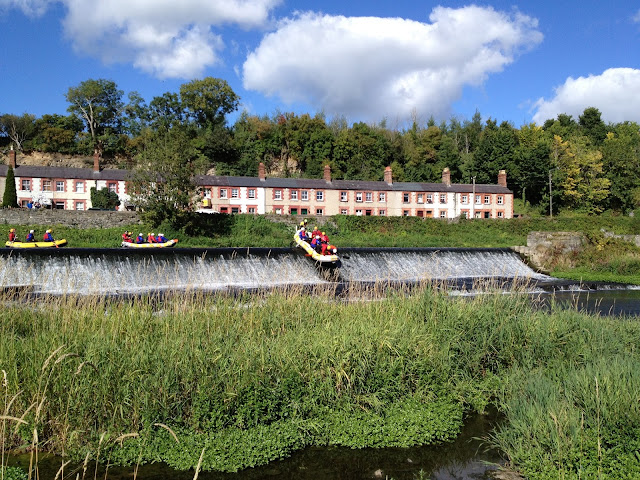 I spent a good couple of hours walking up and down the river, enjoying the fresh air and sunshine and occasionally stopping to sit and doodle and soak up the sights and sounds of the river. I was rewarded with glimpses of herons and the occasional electric blue/green flash of a diving kingfisher. Glorious. But then it was time to head back into Dublin for a bit of shopping, a few more little gallery visits (where, sadly, not much took my fancy) and then some posh nosh at the restaurant of the Schoolhouse Hotel in Swords. It seemed appropriate as Colgan means 'swordsman'. 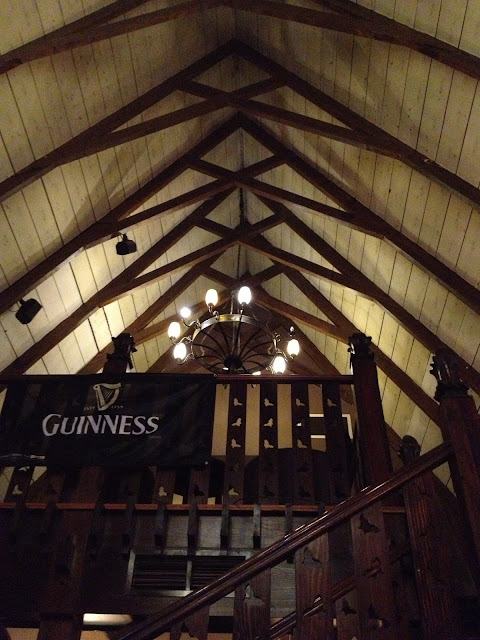 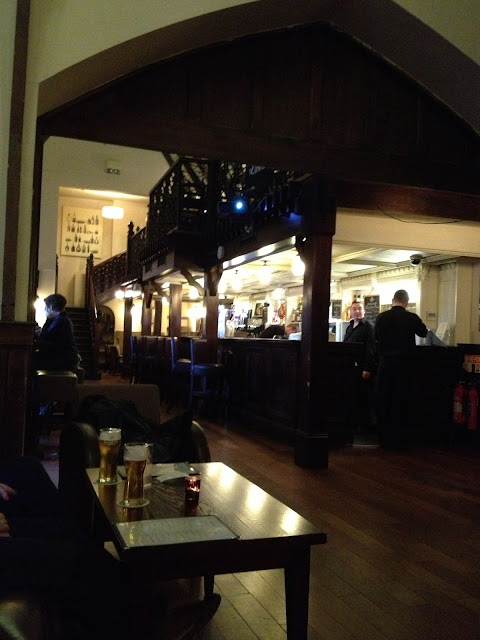 I'd heard good things about the restaurant and Head Chef Francois Grelet. I wasn't disappointed. What a cracking meal it was and in lovely surroundings too. Beautiful fresh figs, air-cured ham from acorn-fed pigs, very possibly the tastiest bit of rabbit I've ever eaten (and I've eaten a lot) and a crème brulee so smooth and creamy it was like an angel melting on your tongue. A hearty recommendation from me if you're in Dublin. And very reasonably priced. Book early though - it's a small restaurant and it fills up very quickly. And that, barring a few more pints in the town centre, was it for Saturday.

Sunday began with a lazy lie-in, a full Irish breakfast (just like a full English but with Irish sausages and white pudding) and then a visit to the Guinness Storehouse, the public side of the huge brewery in St James's Gate. It's Ireland's Number One tourist attraction - no mean feat for what is, essentially, a brewery - but it is great fun. It's like Willy Wonka's factory, only with stout instead of candy. 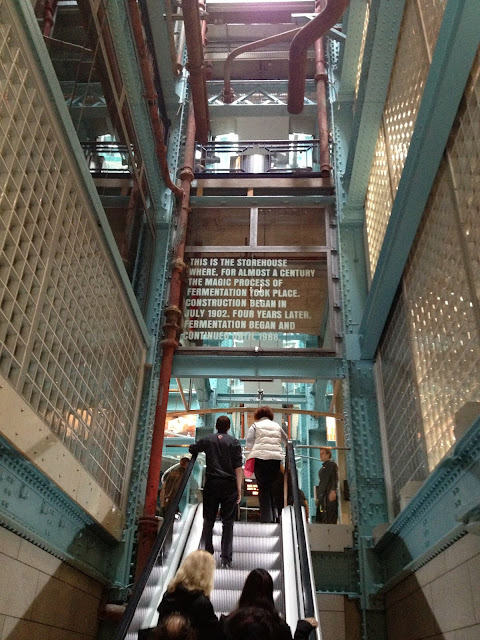 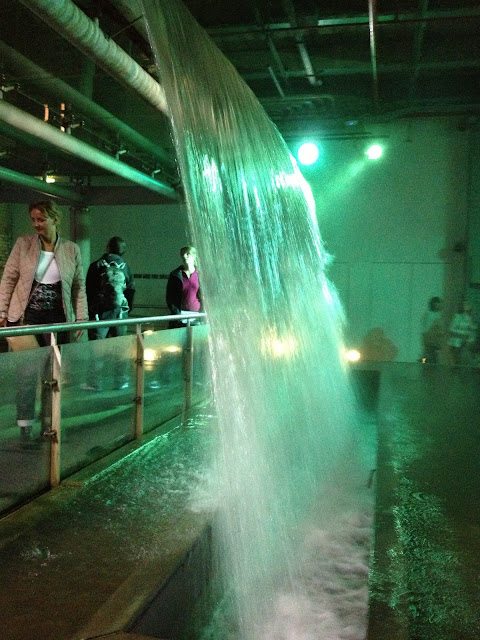 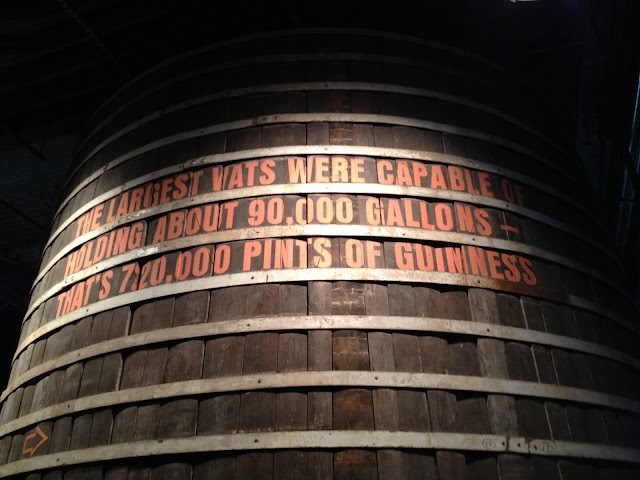 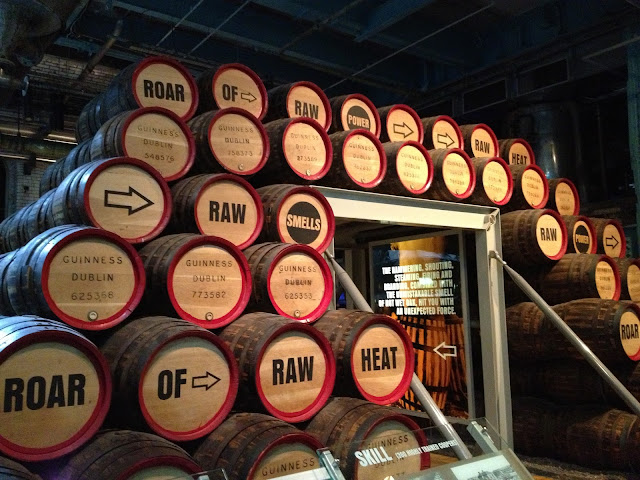 It's really well thought-out and the audio visual stuff is first class. From the atrium - fashioned as if you're standing inside the world's largest pint glass (and which, we were told, would hold 14.3 million pints or 11 days' worth of drinking based upon the average number of pints consumed per day in Ireland alone) - you follow the creation of a pint up through seven floors. Starting with the basic ingredients - water, hops, barley etc. - you work your way up to the second floor where you can taste some Guinness in various foodstuffs in the canteen. The cakes and breads were good. The pies might as well have been filled with shoe heel rubber. The meat was appalling. However, I am told that the food in the fifth floor restaurant is much better. I missed that because I skipped straight up to the 7th floor Gravity Bar, a glass-walled circular room with Guinness on tap and a magnificent 360 degree view over the city. Why go straight there? Well, it so happens that Dublin was having a 'Flight Fest' and 30+ aircraft were due to fly up the Liffey. I figured the view from seven floors up would be pretty good. 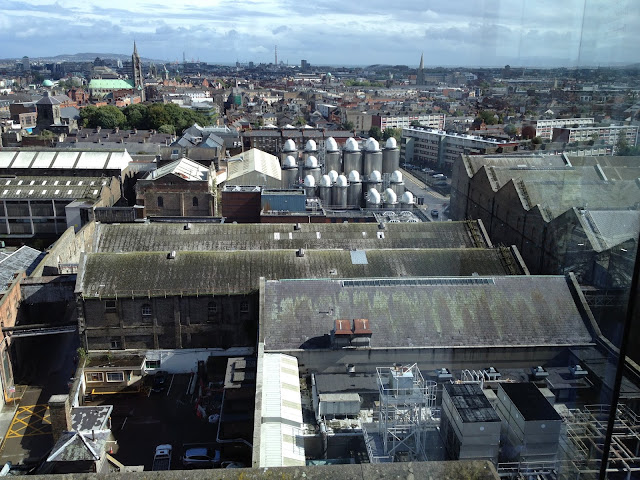 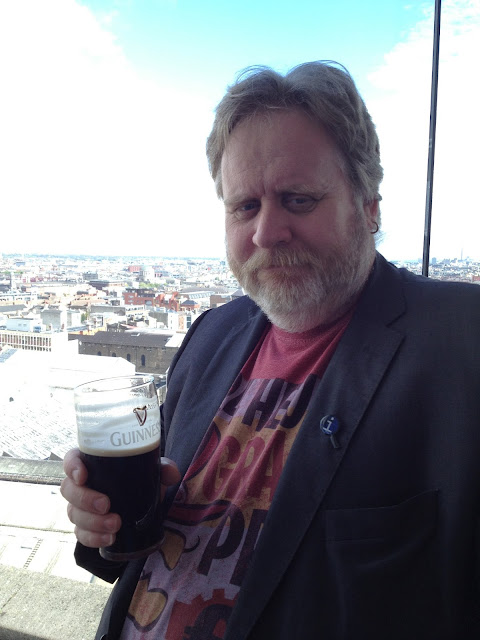 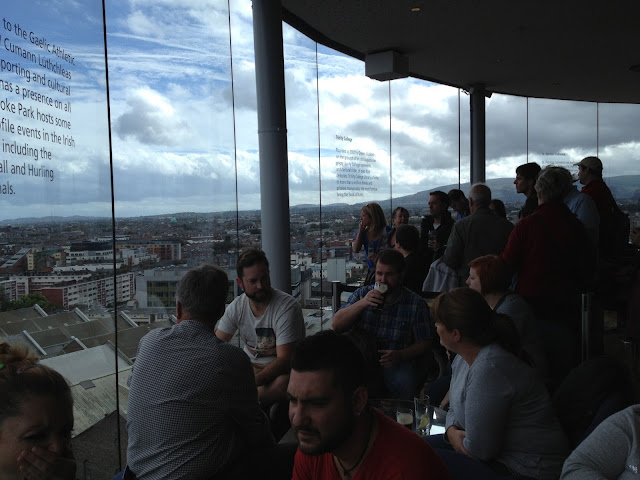 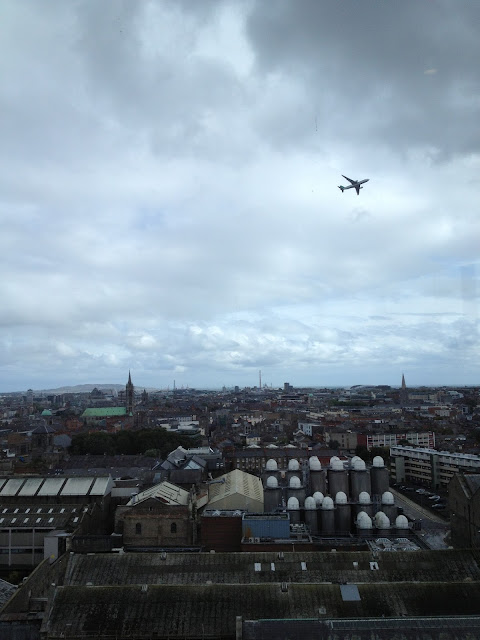 It wasn't. That Aer Lingus jet is about as close as anything came. But, by then, I didn't really mind. You see, as part of your entrance fee, you get a token for a free pint that you can use anywhere on your tour. Many people, however, either didn't fancy it or don't like stout so, at the end of their tour, found themselves on the 7th floor with an unused token. And meeting a fat, bearded, genial Cornishman who liked a drop or two, they were happy to pass them on. I ended up drinking in there all afternoon without a cent passing over the bar. Sláinte!

I eventually staggered out of the bar and haphazardly did some of the rest of the tour, including attending the 'Guinness Academy' and learning how to pull the perfect pint. Which I did. And drank. 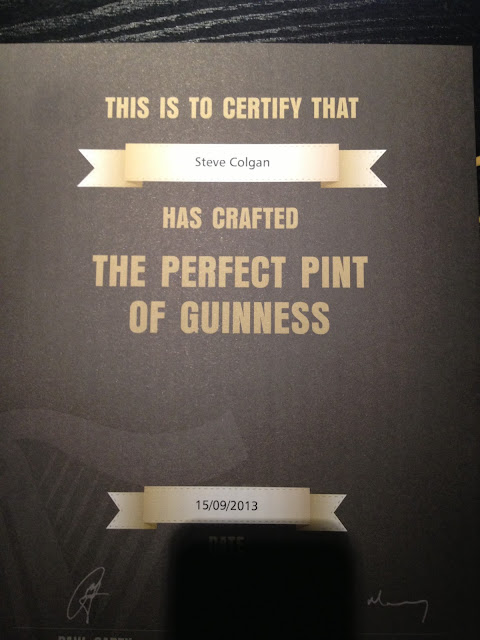 Finally, it was all over and time to sober up a bit and get to the airport for the flight home. I took a cab rather than the more traditional form of transport on offer. 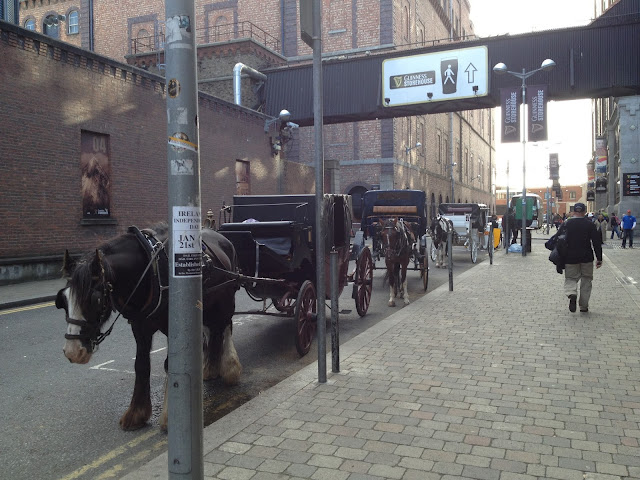 A great weekend away and some new experiences under my belt.

May there be many more.
Posted by Stevyn Colgan at 19:02