I have a strange fascination with collections of objects, which is undoubtedly why I love museums so much. I'm particularly drawn to eclecticism and places like the Grant Museum in London and the Pitt Rivers in Oxford, and the extraordinary Pollock's Toy Museum and the Horniman Museum in London.

One artist who has fascinated me for years is the late Barton Lidice Beneš, who died last year from acute kidney failure complicated by being HIV positive. Always controversial and provocative, Beneš became best known for his 'museums'; collations of objects found, donated or 'obtained', that he organised into themes and set into frames or partitioned wooden boxes of the kind once used to hold moveable type in print shops. Here's an example, taken from an excellent book I have on his work called Curiosa (Damn I need to cut my nails): 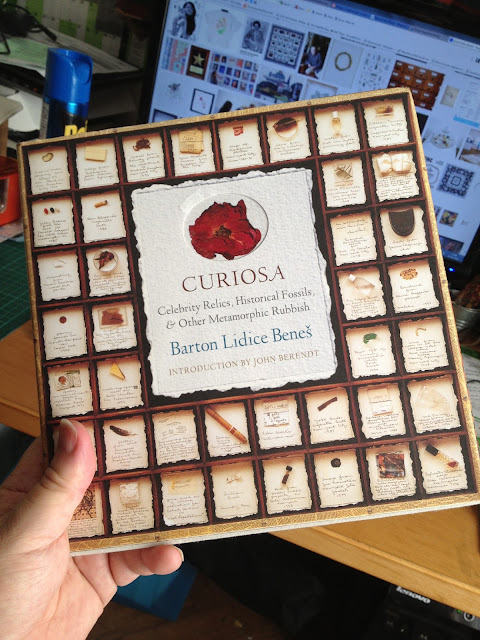 What I love is that every little exhibit tells a story. Look closely and you'll find things like a fragment of tile from the bathroom where Sid Vicious' girlfriend, Nancy Spungen, was found. Or a piece of brick from the chimney at Lizzie Borden's house. Or a piece of glass from the crash site where Princess Diana died. But it's not all macabre. You'll also find a fortune cookie cracked by Walter Cronkite, Oscar Hammerstein's tuxedo stud, jelly beans from the desk of Ronald Reagan or a piece of one of Elizabeth Taylor's shoes. Beneš had a love of glamour and a deep fascination with Hollywood and had a large network of 'helpers' among the entourages of many celebrities who sent him new exhibits. 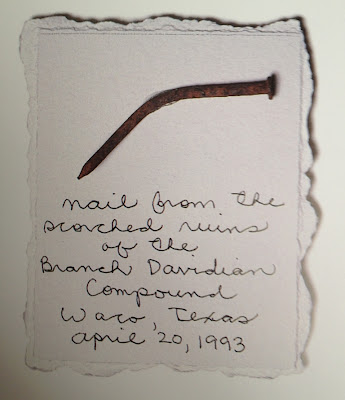 All of his work follows themes; one 'museum' may be about dying under the age of 30, another simply the colour red, yet another famous artists. On the subject of artists, one of his more notorious pieces was the '1 Gram of Picasso'. 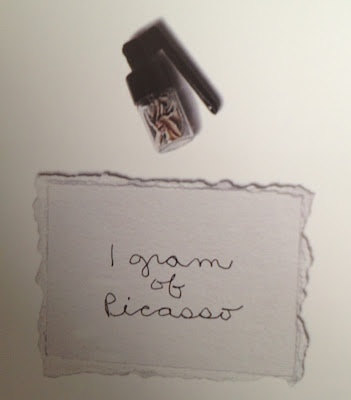 Beneš﻿ once owned an original signed Picasso lithograph that cost him a lot of money. But one night, while he was what he described as 'a little high', he scribbled all over it, rendering it next to valueless. So he tore it up. popped it in a blender, obtained some cocaine bottles and sold Picasso by the gram. They sold very quickly and soon he only had a couple left. So when a Swedish dealer asked for more, he 'cut' the Picasso with some blended white art paper.
He was also capable of producing some outstandingly beautiful artwork using found objects. Here's a piece he did using dead beetles: 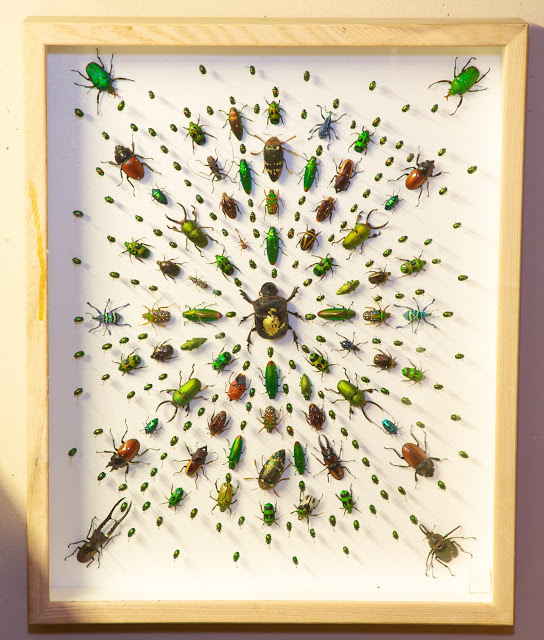 Elsewhere, if you do an image search, you'll find multi-coloured spheres made from jelly beans, wooden printers' type blocks and AIDS medication. He produced some particularly harrowing and raw pieces to promote AIDS awareness including an hourglass containing the mingled ashes of two of his friends who'd died of the disease and a syringe containing AIDS infected blood that many galleries and museums refused to exhibit. 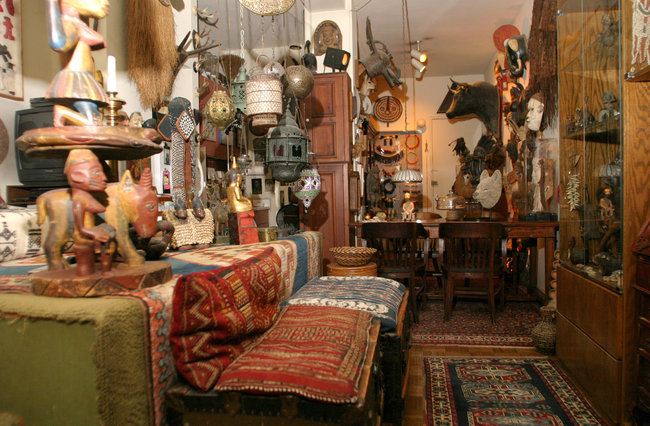 As the new Millennium arrived and his health began to fail he became something of a recluse and turned his 850-square-foot Greenwich Village apartment and studio into what he called 'my tomb'. It became a living museum of artworks, collections and memento mori such as tribal masks, animal skeletons, taxidermy, religious relics, voodoo dolls and celebrity ephemera. Upon his death, the North Dakota Museum of Art in Grand Forks announced that it had agreed with the artist to build a replica of his apartment and furnish it exactly as he left it. I see from their website that this is still the plan and that they are currently raising the funds to do so.
Beneš﻿ was an extraordinary chap. But I think he tapped into an area of human behaviour we all share to a greater or lesser degree - the urge to collect and collate. Collecting is almost a mania among children and toy manufacturers are keen to exploit this. After all, no one wants an incomplete set of pogs, Pokémon or specialist magazines. And, every so often, I come across a website that celebrates this urge.
Just a few days ago I discovered the delightful Things Organized Neatly site to which people can post examples of objects collected and organised. Things like Esther McLaughlin's The Cycle Path: Or these two pictures by Bill Murray: Or Emily Blincoe's Brown things I found at a market today and My Aunt Terry and her rock collection: Just because you can't draw or paint (or think you can't) doesn't mean you can't create beautiful art.
That's what Barton Lidice Beneš﻿ did.﻿
Posted by Stevyn Colgan at 14:31