How the Hal was done

Just a quick blogpost about the recent 'Hal' painting that I did. The commission was from the godmother of a one year old lad who is the child of a marine biologist and a science correspondent. After some discussions, we decided that it would be nice to set it under water. I then suggested I make a coral reef from the letters of the lad's name. Here are some of the preliminary sketches: 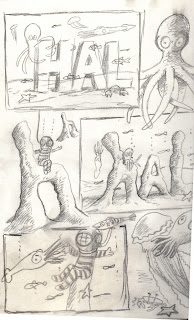 I figured I'd go for an organgey-pink colour for the coral (I think that some people actually call the colour 'coral') so I needed to choose a blue-green for the sea that would work with it. I then 'got rid of the white' using a mix of cerulean blue, viridian, white and an occasional warm streak of yellow ochre. I decided that I'd have the light source for this piece falling from above and to the left. 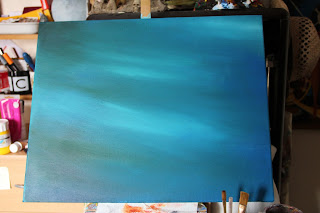 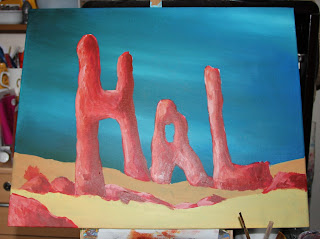 The ground was blocked in using white, crimson, cadmium yellow, yellow ochre and burnt umber. Then the coral was added using the same colours but with heavy emphasis on reds and yellows. Next stage was to block in the fish with white acrylic and Posca pens. 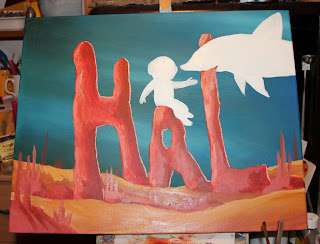 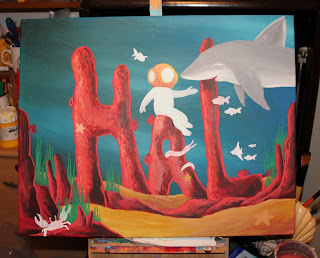 I then started to add seaweed with greens made from the existing palette of colours. Now it was just a matter of adding some extra layers of transparent colour (inks and watercolour) to increase the depth of colour and, finally, painting in the finer details. For this I used Posca pens, acrylics and a light airbrush of white across the top edge to simulate light falling on the surface above. And here's the finished pic: 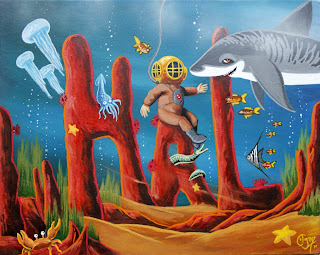