In recent years I've had a play with digital art as well as painting. Being the hairy old dinosaur that I am, any meagre art training I ever had was pre-computer so I didn't grow up with Photoshop and Illustrator or any other art package and am therefore fairly ignorant of them. More importantly, they are so big and complex that I never seem to find the time to sit down and learn how to use them. I can do a bit here and there but I'm a long, long way from reaching any level of industry standard of competence.

The digital art I do tends to be quite clunky and old-fashioned but I kind of like that. I like that the lines aren't smoothed out or tidied. It looks more 'drawn'. In fact, despite owning a graphics tablet which I do use for some things, I've reverted to drawing with a mouse as it gives a natural, wobbly line that mirrors how I draw with a pen or pencil. I also use an older piece of software - Paintshop Pro 7. It's pretty much obsolete (the current version on sale is X4 and the company is owned by Corel) but it has very few bells and whistles, isn't at all complicated and does everything I need it to do. Most software seems to me to be 10% function and 90% distraction so the lack of fancypants gimmicks keeps me focused.

Here's how I work. Firstly, I'll sketch out the image and then scan it at 600dpi. This gives me a nice big image to play with. The example I'll use here is my cosplayers print Wonderwomen and Sith Lords. Next step is to drop in the background colour by adding a layer, masking areas off and using the fill tool. 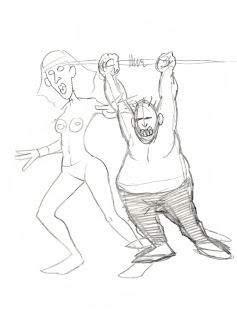 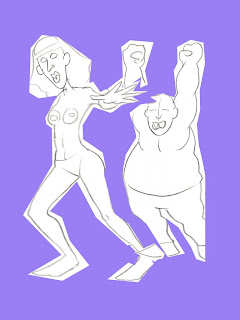 Next, I mask off different areas and fill with flat blocks of colour to create the overall look of the piece before adding outlines in black. This is done by a combination of drawing in freehand and masking off small areas and filling with black. 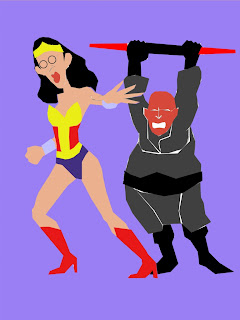 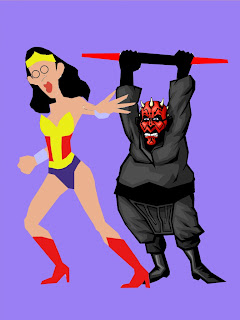 I then begin shading by masking off areas and using the lightness/tone tool to drop the area by around 30% for darker and up %30 for lighter. I also try out changes to the composition; in the case of this image I first added a cloak to Darth Maul (which didn't work) and changed the leg positions of Wonderwoman (which did). The joy of digital work is the ease with which changes like this can be made. There's no excuse for wonky eyes any more. 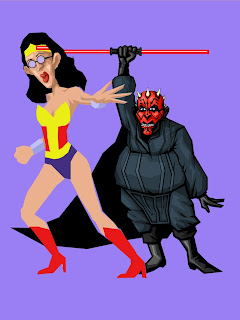 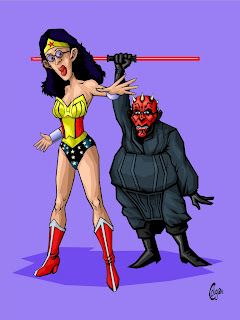 I know it's clunky and old-fashioned. I know that if I learned the industry satndard software I could probably complete a piece in half the time. But do I want to? The answer, for the time being anyway, is a resounding no. I enjoy taking my time and I like the finished results I get. Far too much digital art, it seems to me, looks the same. The individuality of the artist has been swallowed by the software 'improving' it.

Oh and before I settled on Darth Maul as my representative from the Star Wars canon, I had intended to use a bloke called Derek dressed as Han Solo. I think I made the right choice. 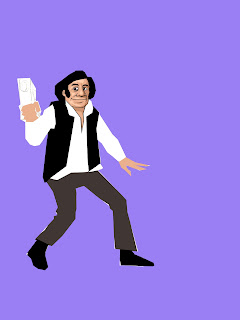