A Dead Bloke and some Living Blokes you should meet

After today's QI production meeting I walked to University College London to meet up with Dan Schreiber - producer of The Museum of Curiosity, Marc Abrahams from the Ig Nobel Prizes and several scientist chums. We're starting to scout for potential guests for the new series and, unlike QI where the audience expectation is comedians, we can have anyone we like on Museum, as long as they're entertaining and interesting. As the result we've had panellists as diverse as Leigh Francis (Keith Lemon), Buzz Aldrin, Neil Gaiman, Suggs, Dr Erica McAlister (curator of flies, Natural History Museum), Baron West of Spithead (ex-head of the Royal Navy), Suggs, Sir Terry Pratchett, Dr Alice Roberts, Brian Eno and many other brilliant people ... plus comedians. 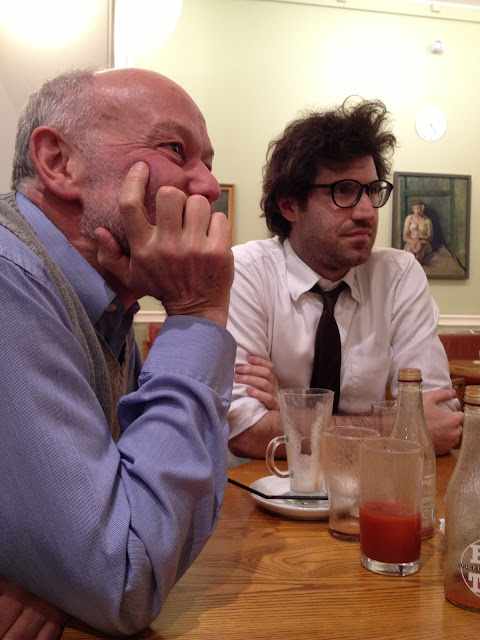 Among those around the table was Dr Chris McManus (left) whose scientific paper 'Scrotal asymmetry in man and in ancient sculpture' is a classic. It garnered him an Ig Nobel (science that makes you laugh, then think) and an appearance on QI after a discussion of his paper. Puerile tittering aside, there is some serious science here about asymmetry and handedness.

The UCL is notable for having an 'auto-icon' displayed in a hallway. It's Jeremy Bentham, the great reformer and philosopher, who asked that, after his death, he be put on show. What you see is Bentham's skeleton, padded out and dressed in his clothes and sat on a chair. He had asked that the piece incorporate his actual head, mummified to resemble its appearance in life. However, Dr Southwood Smith's experimental efforts at mummification were, at best ... not good. He based his process on the practices of the indigenous people of New Zealand. This involved placing the head under an air pump over sulphuric acid and drawing off the fluids. Although technically successful, it did leave Bentham's head looking 'distastefully macabre, with dried and darkened skin stretched taut over the skull'. The Auto-icon was therefore given a wax head and fitted with some of Bentham's own hair. The real head was displayed in the same case for many years on the floor between his feet ... but it became the target of repeated student pranks. It is now locked away securely. 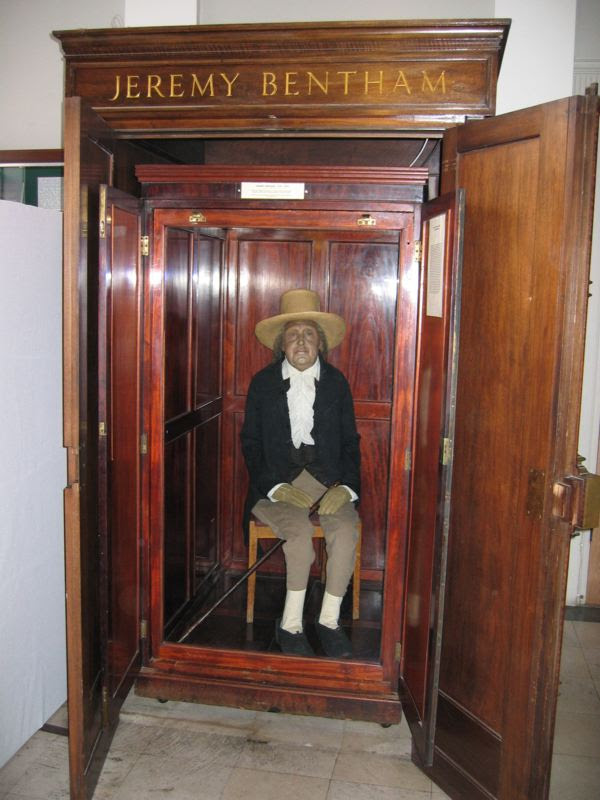 After the meeting, Dan and I repaired to a pub to discuss another possible TV/radio project that we're hoping to pitch later in the year. We also talked about the first live show of Dan's 101 People to Meet before You (or They) Die show. It's an idea that we've kicked about for some time - you may recall that we tried a radio version back in May last year (you can listen to it here). With what we learned from this pilot, Dan has revamped the format and is now launching it as a regular series of live interviews with extraordinary folks.

The first one takes place on Saturday April 6th at the Conway Hall, in Holborn, London, and will feature Dr Jan Bondeson - an expert in such bizarre subjects as talking dogs, a bottom-stabbing 18th century villain and medical 'freaks'. Also on the bill is the aforementioned Marc Abrahams, founder of the Ig Nobels.

Do come along if you can. Details/tickets here.