An extraordinary fossil has turned up in Australia. The primitive bird (it still had teeth) Pelagornis lived around 5 million years ago and is believed to have been one of the largest, if not the largest, bird ever to fly. Its wingspan was a staggering 6 metres. That's just short of 20 feet. Or, if you want a visual, about the same as the height of a fully-grown giraffe. Here's an artist's reconstruction: 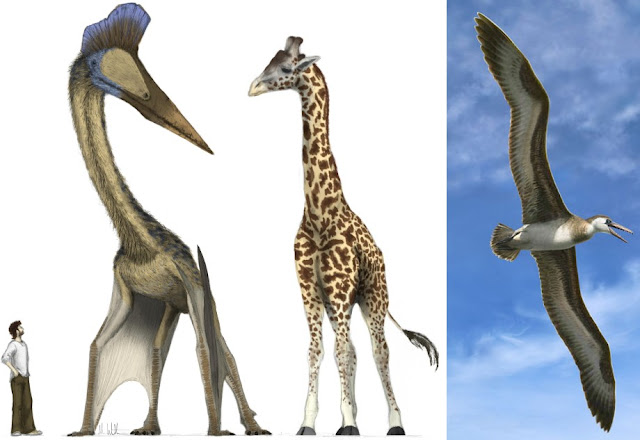 I've also shown it alongside a reconstruction of a Hatzegopteryx just to give you an idea of how big the prehistoric pterosaurs could get. Here's another Hatzegopteryx along with its cousin the better-known Quetzacoatlus:

To think that I used to be impressed by the sight of a heron or a swan in flight. These guys make everything we have today seem kind-of tame, don't they?
Posted by Stevyn Colgan at 01:53