Boys in Blue - Step by Step

Another painting in my Cliché Britain series. This one was a little different. The four previous painting - Meat and Two Veg, Vicars and Tarts, Fisherman's Friends and Teacher's Pet - were all completed in full colour on 50.5 x 40.5cm (20" by 16") box canvases: 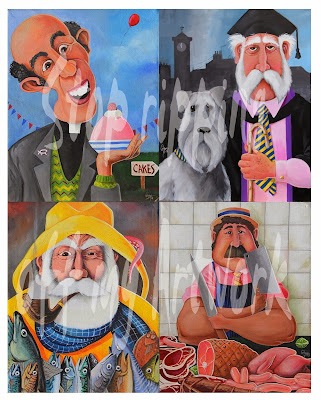 However, while painting Teacher's Pet, I found myself wondering if I could do a painting that is monochromatic. The obvious thing to do was something in sepia or shades of grey but no subject (or attendant cliché) jumped out at me. But then the phrase Boys in Blue occurred to me and the painting virtually jumped fully formed into my head. Plus, I had a couple of sketches left over from when I did the prize painting for Constable Colgan's Connectoscope: 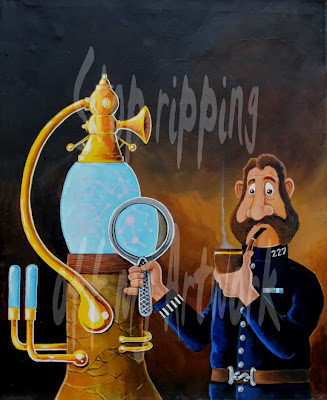 So, here's the sketch and first blocking in. I decided to use a smaller 30 x 40cm canvas and to mask off an outer frame (with masking tape - what else?) so that the finished portrait would look something like an old-fashioned photo: 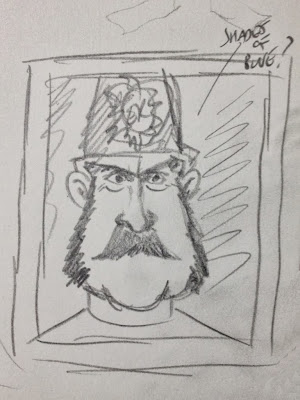 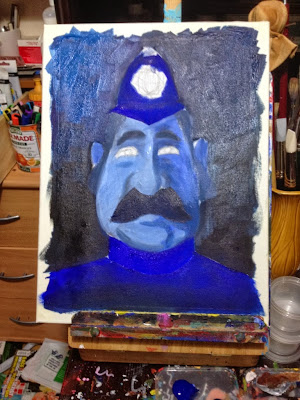 My first idea was to make the helmet comically small, such as those you buy from joke shops. But, as the painting progressed, it became obvious that a full sized helmet would work better and the painting would fit better into the series. So I resized it and began to build up the depth of colour and shading. 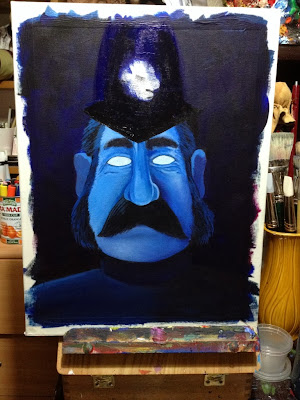 I took some liberties with the word 'blue' by adding a touch of quinacridone magenta (which has some blue in it) to the background. It's such a beautiful colour and it helped lift the figure off the canvas. I took off the masking tape at this point and painted in some eyes, buttons and collar numbers. 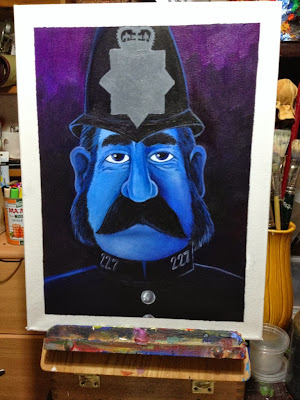 The final job was to tidy up generally, sort out the asymmetric sideburns, and shrink the helmet badge which, I realised, was way too big. For accuracy there should also be a chin strap ... I'm not sure what to do about that. Sigh. I'll probably just leave it. Any road up - here's the finished painting: 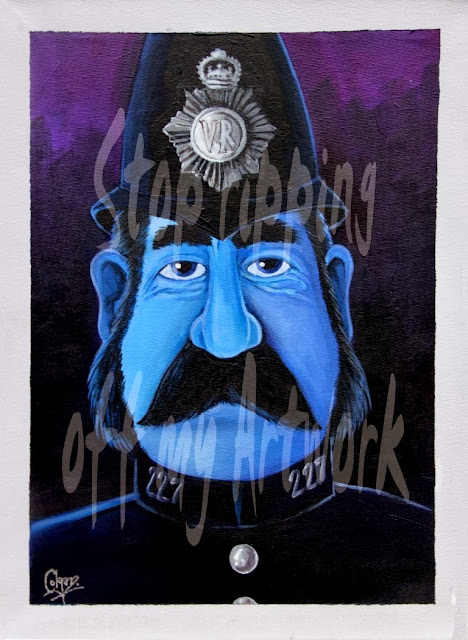 And, yes, I know it bloody looks like me again. Apparently. I must address this with the next painting.
Posted by Stevyn Colgan at 16:07