Never quite getting to the Alien Planet

I made a very good find today ... the entire 90 minute Alien Planet documentary.

Back in the early 1990s, I had (yet another) near-miss with a book project. A great friend of mine, John Coppinger, is a sculptor. He's the man who made Jabba the Hutt for Return of the Jedi and you've seen his creatures in many, many films. Here's John (far right - beard) on set and me with Jabba's face before painting: 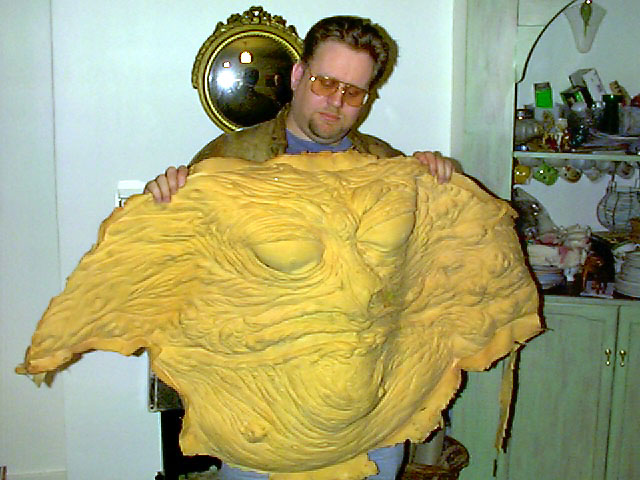 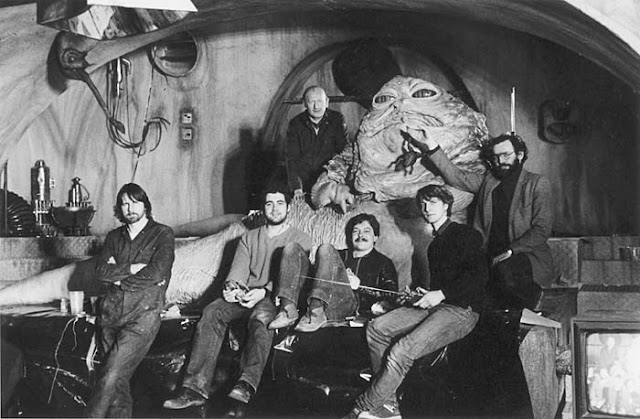 Anyway, he and I had the idea of creating a book in which we visit alien worlds and meet creatures that have evolved to live on those worlds. The idea was that we would make the book educational; by showing how creatures have evolved elsewhere we could mirror how life has evolved here. The gimmick was that John would actually build the creatures (this was before CGI). So we put together some sample chapters and a few photos and illustrations like these: 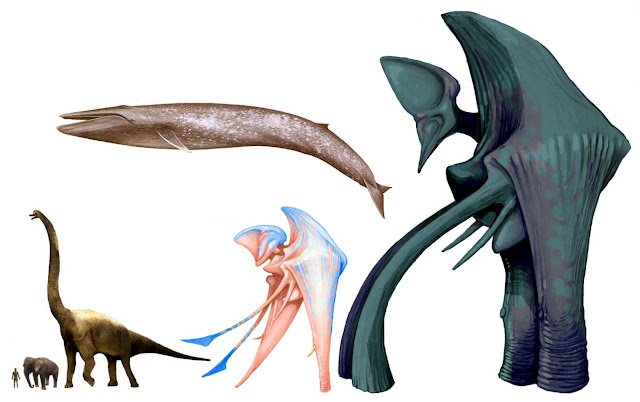 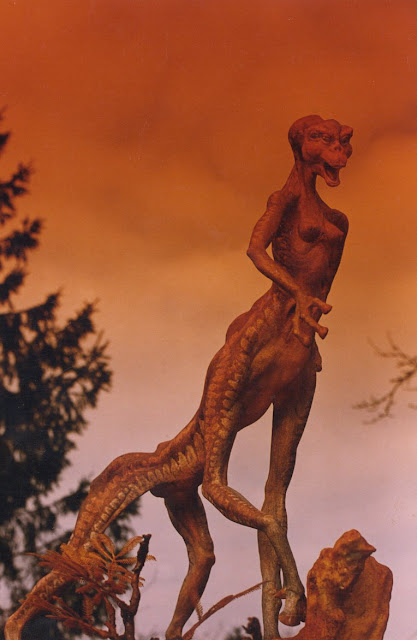 And we got a bite! Dorling Kindersley liked it and negotiations began. Via them, John and I also ended up contributing some content to a Channel 4 Equinox show on aliens and I got to chat with people like Dougal Dixon and Professor Jack Cohen - the alien guys in the UK. Things went along merrily for a while ... but then the guy at DK we'd been dealing with jumped to another publisher and the lady who took over our project dropped it as she didn't believe in it. To add to our problems, the film Stargate appeared and effectively used exactly the same idea we'd had of a kind of 'subway' network of gateways allowing people to jump from world to world. And so the book died. That's the way things happen sometimes.

Then, a few years later in 1999, the BBC launched the groundbreaking Walking with Dinosaurs show and John was involved in sculpting dinosaurs for it. And we wondered whether it was worth pitching the idea of a 'Walking with Aliens'. After all, we had all of the research done and we'd designed the aliens. I also contacted a brilliant Australian artist called Alex Ries and asked if he wanted to be involved if we got it off the ground. You can see some of his extraordinary alien design work here. Here's a sample: 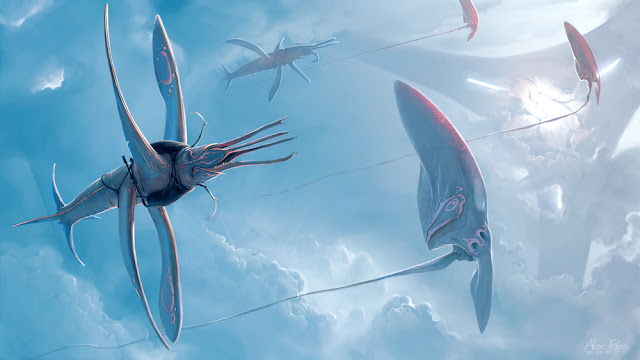 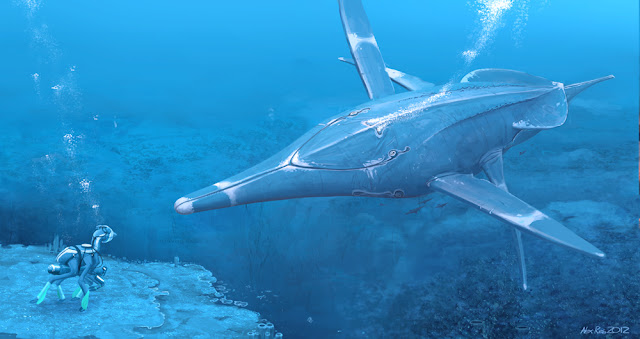 However, the BBC told us that they were already working on a 'Walking with Aliens' project with Dougal Dixon so we backed off. And that was that for the project. That said, whatever the BBC was planning didn't happen and the series never got made. However, on the other side of the Atlantic, the Discovery Channel was doing something along the same lines. They'd decided to make a CGI show based on the fantastic alien designs and illustrations of Wayne Douglas Barlowe. 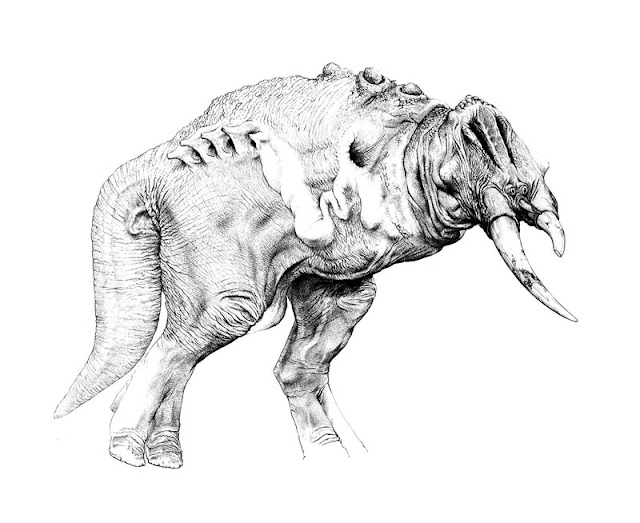 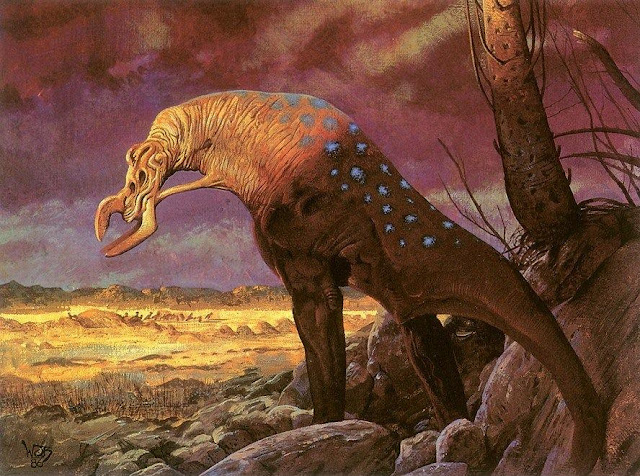 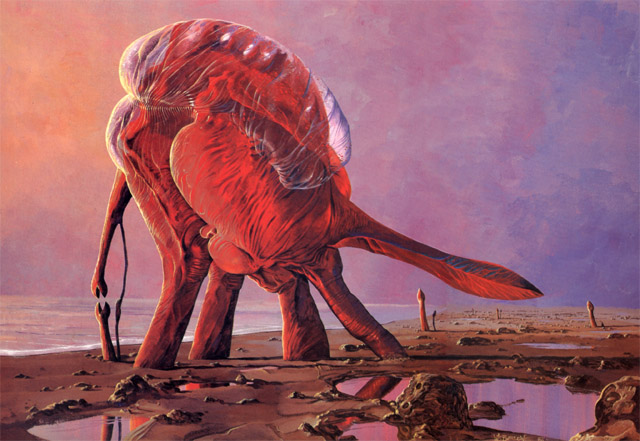 Barlowe has designed creatures for many films. For example, he worked on both Hellboy films and designed the wildlife for Avatar. And, in 1993, he wrote a book called Expedition; a lavishly illustrated guide to the wildlife of another planet called Darwin IV. I have a copy and it's a staggeringly lovely thing. And it was this book that Discovery brought to life. I watched the show when it was on and loved it. I even bought the DVD. But now you can watch it all here for free. Enjoy!

P.s. I still have a great alien book project if anyone wants to publish it ...
Posted by Stevyn Colgan at 02:25