10.
Home for Top Cat and his gang - Benny the Ball, Fancy-Fancy, Spook, Brain and Choo Choo – was called Hoagie’s Alley.
9.
Danger Mouse’s eye patch was an affectation only and ‘part of the suit’.
8.
Danger Mouse’s assistant, Ernest Penfold, was a hamster. His boss, Colonel K, was a chinchilla.
7.
Secret Squirrel is known as ‘No-Worries Squirrrel’ in Portuguese-speaking countries, ‘Secret-less Agent’ in France and ‘Agent Ekorn (Acorn)’ in Norway.
6.
Dick Dastardly’s voice was provided by Paul Winchell, the same man who did Disney’s version of Tigger. Dastardly’s full name is Richard Milhous Dastardly. No, really.
5.
Fred and Wilma Flintstone were the first couple ever to be seen in bed together on US television. The show was originally going to be called The Flagstones.
4.
Ranger Smith of Yogi Bear fame is called John Francis Smith although in one episode, for no apparent reason, he gives his name as Harold.
3.
Officer Dibble’s first name was Charlie.
2.
Dick Dastardly has an identical twin brother known as the Dread Baron who has a dog that looks almost identical to Muttley called Mumbly. The Dread Baron appeared in Hanna- Barbera’s Laff-A-Lympics series. His relationship to Dastardly was never explained until issue #12 of the Laff-A-Lympics comic book by Marvel Comics. It's believed that he was invented at the last minute because there were licensing complications in using Dastardly and Muttley in the new show because the characters were part-owned by Heatter-Quigley Productions.
1.
Penelope Pitstop had a vibrator fitted in her car, the Compact Pussycat. As you may recall, her car was a mobile beauty salon with all kinds of built-in devices such as hair dryers and a robotic hand that dispensed lipstick. Well, in one episode called Speeding for Smogland, we clearly see her select the following device: 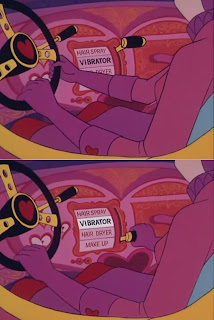 When activated, a belt emerged and looped around her waist and began vibrating in the style of those old weight-loss machines. Here's the episode if you want to see it for yourself:

I’d be very surprised if its inclusion wasn’t a little joke especially for the adults watching.
Posted by Stevyn Colgan at 16:43