We are much smarter these days ... aren't we?

Someone asked me the other day to suggest some good 'fact books' for kids as her son - though only 10 - is fascinated by such things. It's so nice to hear this but also terribly disheartening to find so few really good books or comics that make learning fun. There's the wonderful Horrible Histories series of course and some other very worthy titles. But the majority seem to be sensationalist in nature with exclamation marks at the end of every sentence and primarily focused on snot, poo or farts. The amount you actually learn from these books is next to nothing and, as I found by scanning through a few, not always correct either (Sorry, but humans are not descended from apes. Even apes aren't descended from apes. We are branches on the same tree and we all decended from primate ancestors who were not, at that time, either apes or humans).

Ah for the days when children's books and comics were fun and educational and accurate and didn't need to resort to potty humour!

On a shelf behind me there is a book I found in a charity shop and happily paid £3 for. It's called The Children's Book of Games, Puzzles and Pastimes and it was worth every penny. It's a gem. 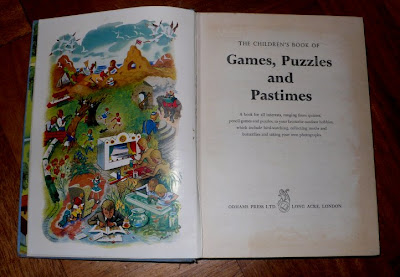 Published by Odhams sometime not very long after 1952 (it doesn't have a date of publication but does mention 'young' Queen Elizabeth II as well as various Georges and Edwards), it's a guide for bored kids. It boasts fascinating features like Spot the cats, Nut Folk - How to make them yourself, Safety first, Stamps are interesting and the brilliantly titled The Game of Visiting Birds' Nests without Robbing Them. It explains how to take photographs and offers a handy comparison between popular 'modern' models like the folding bellows camera and the box camera. It also dispenses useful advice to butterfly collectors such as:

'Your local chemist will make you a proper killing bottle for insects at the cost of about half a crown. Make quite sure the insects' wings are quite dry before you kill them.' 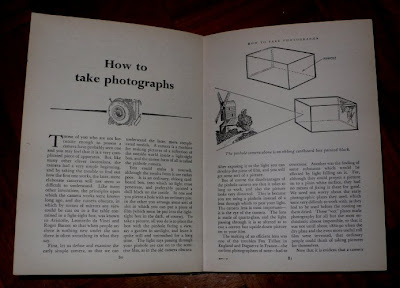 If you're having a party, why not play some of the rippingly super games described? Like Fish Fanning Relay, Duster Hockey, Sir Walter Raleigh Relay, Driving the pig to market and the cracking good fun of Pass me the newspaper please. There's a guide to identifying trees, another on pond-life and a jolly description of catching crabs at the seaside. There's even a 'simple' guide to building your own radio ... though the final device looks suspiciously like something that Doctor Who would knock up to defeat the Daleks. 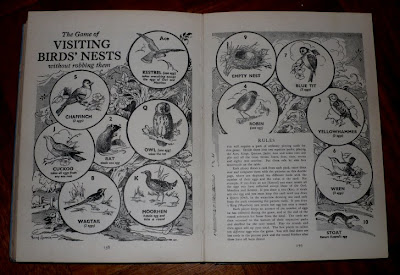 But my absolute favourite sections of the book are the quizzes and puzzles. And it is in these that an inconvenient truth can be seen. Right here in this old book, over 50 years old and aimed at kids between 10-15, are questions that I doubt many kids today could answer. Questions like:

1. Here is an object described in highfalutin language. Can you get it? An argentic truncated hollow cone, semi-perforated with symmetrical indentations.

2. Can you give the name of the object from the following description? Like one of the giants of mythology it leaves the portals of the North armed with huge blocks of stone. Proudly it sails on. The waves that dash in foam against its sides shake not the strength of its crystal walls nor tarnish the sheen of its emerald caves. Sleet and snow, storm and tempest are its congenial elements.

4. Give the plural of the following: phalanx, sphinx, lemma, phenomenon, axis.

Not easy are they? You'll note that I've only included one maths question. That's because the ones in the book mostly deal in Imperial measurements (hurrah!) and 'old money' i.e. Pounds, Shillings and Pence (and if you don't understand how 'old money' worked, read this). Still, I'll leave you with one of them, just for a giggle.

Now, I realise that kids today have other stuff to learn and that the eating habits of farm animals and identifying characters from English literature sadly may not have much relevance for them any more. But these kinds of questions are still valid even in today's society. They exercise the brain. They provoke analytical skills. They encourage problem solving. Maths skills are still useful and communication skills - speaking, writing, spelling, grammar - have never been more important. They should be at the forefront of a child's skill set.

Oh, and the answers can be found at the very bottom of this post. Not that you'll need them of course. You knew all the answers ... didn't you? 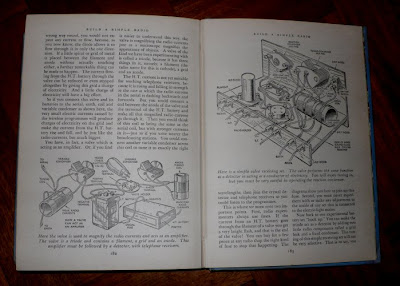 I also have lots of old comics from my childhood including copies of Countdown comic from 1971 onwards. This was a comic aimed at boys like me (I was 10 in 1971) and featured cartoon strips of Doctor Who, Thunderbirds, My Favourite Martian etc. It also had features on the future of space exploration and a letters page where you could ask questions. Look at this example from Issue 2. (Click on the pictures for a larger image.) 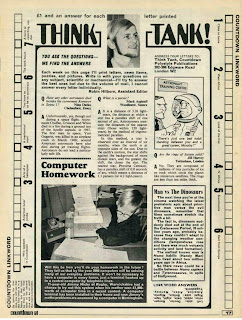 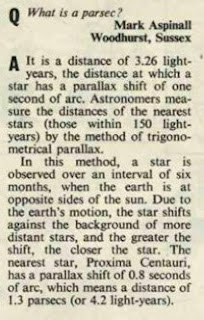 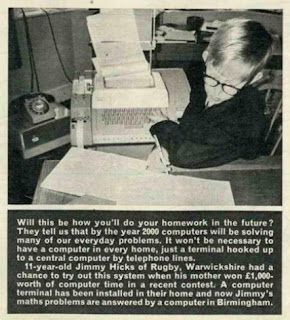 I love the fact that 10 year old boys were asking about parsecs and Saturn's rings. Even if (as I suspect) the questions were actually set by the editors, isn't it extraordinary that a comic was taking the time to explain parallax shift in understandable English?

I'm a bit out of touch with kid's comics these days. So what is the modern equivalent? Or is it all just TV tie-ins and magazines designed to make them collect stuff like Pokemons and football stickers?

Do let me know.

(Questions and answers reprinted word for word from the book)
Posted by Stevyn Colgan at 13:55