I can remember buying the first edition of 2000AD, which is currently celebrating its 35th birthday. It was such a revelation. Not many US comics got to us in rural Cornwall and, until 1977, all I bought regularly were the Marvel UK reprint comics like Planet of the Apes and Savage Sword of Conan. I can't moan about those publications; they were larger format than US comics and printed in black and white which meant that it was easier to see (and copy) the wonderfully clean lines and dramatic pen work of my comicbook heroes: Gil Kane, Alfredo Alcala, Neal Adams, Barry Windsor-Smith, Jack Kirby et al. (click to see larger pictures) 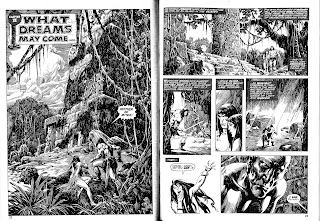 The solid pencils of John Buscema and the beautiful inking of Alfredo Alcala for Conan.
From the very start, I realised that 2000AD was something special. The format of just 5-6 pages of story per issue kept us all in a permanent state of cliff-hanging. The artwork was staggeringly original and unlike anything being produced in the USA. Just look at this page from Peter Milligan's The Dead strip illustrated by the late Massimo Belardinelli to see what I mean: 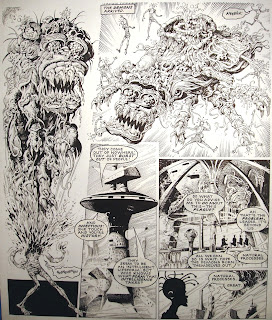 A re-born and re-energised Dan Dare was the main character featured in the early issues but he was very quickly overtaken in popularity by Judge Dredd who appeared for the first time in issue (prog) two. And, as time went on, other wonderful characters appeared: Strontium Dog, Robo Hunter, Halo Jones, the ABC Warriors, Slaine, Hewligan, Rogue Trooper, DR and Quinch, Harry Twenty ... the list goes on and on. I won't bore you with any more 2000AD history as other sites will do it bigger and better than I can. What I will say is that 2000AD added hugely to my pantheon of art gods, among them Brian Bolland, Mick McMahon, Simon Bisley, Ian Gibson, Carlos Ezquerra, Dave Gibbons, Glenn Fabry, Steve Dillon, Bryan Talbot, Frank Quitely and so many more. 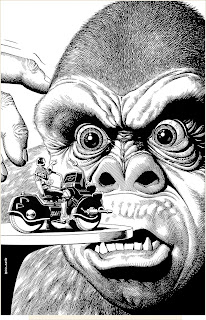 Brian Bolland's outstanding work on Judge Dredd
But, more importantly, 2000AD taught me that comics could be brilliantly written. When I'd bought comics in the past, the words had almost gone unnoticed; they were merely the vehicles that brought great artwork into my home. Now I was exposed to the wit, charm, drama, passion, melancholy and sheer brilliance of John Wagner, Alan Grant, Pat Mills, Garth Ennis, Pete Milligan and Alan Moore. Comics were now art on every level. 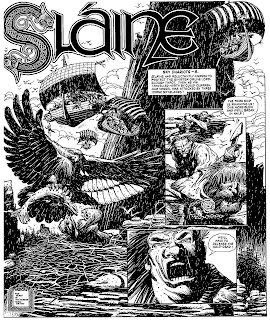 Mick McMahon's inspired work on Slaine
Of course, I tried out for the comic and one of my greatest treasures is a rejection letter from the editor telling me that 'extreme violence and half-naked women are not suitable material for a children's comic' just months before Simon Bisley's extraordinary interpretation of Slaine burst onto the scene with its visceral gouts of blood, savage muscle-bound Celtic barbarians and huge breasted semi-naked Amazons! 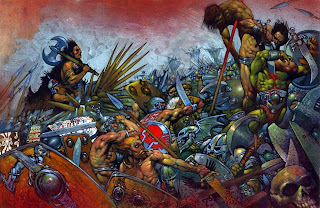 Simon Bisley doing what he does best - Slaine
The rejection spurred me on to start my own comics imprint (see the full story here and here) and, within a year, I found myself working alongside many of my 2000AD heroes in the comics industry. 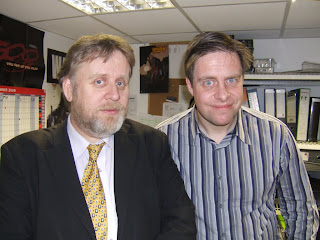 Sean Hughes, Brian Bolland and Dave Gibbons wondering where the tea is. 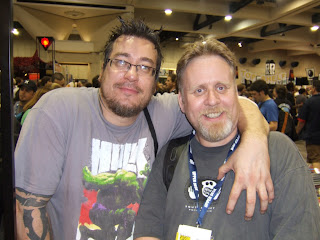 Simon Bisley playing with my moobs 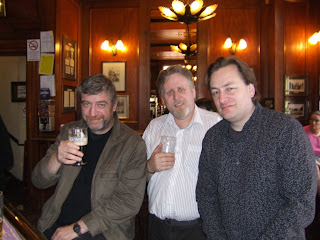 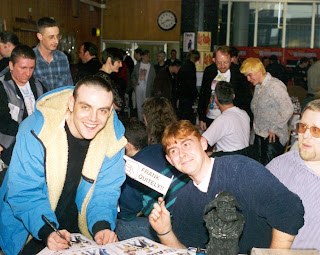 Frank Quitely signing Issue 1 of our new comic. Murphy looking ginger. Me looking like a panda.
I kind of lost interest in 2000AD when it started to introduce Photoshop colouring. Suddenly every strip seemed to look the same and the work of one artist seemed to blend into another. It felt like being colourful and funky was more important than the stories and the underlying drawing. But that's okay - I'm happy to pass it on to a new generation of fans. I'll sit here and read and re-read my volumes of reprints from the comic; glorious fun, endlessly inventive, wonderfully funny.

Happy Birthday 2000AD and thank you. You've been a huge influence on my life.

And reprint The Dead as a book will you? Like most foolish blokes, I sold my collection a few years back and wrongly assumed that there would be more reprints than there have been. I so want to read it all again!
Posted by Stevyn Colgan at 15:00