There's a musical streak that runs through the Colgan tribe. My late grandafathers were both male voice choristers and my father was an excellent guitarist and drummer who played in skiffle bands in the 1950s, including Wally Whyton's band. As a child I was one of the UK's top competition choir boys (it's true!) and I also play guitar, drums and few other instruments. I played in a band all through my teens. That's me on the left with the mandolin in this publicity photo from 1979. 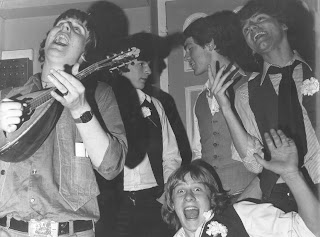 I only do the occasional live performance these days but I have been writing songs for more than 30 years. You can hear a few rough recordings here (with my good friend and co-writer Huw Williams on keyboards and bass). Also, in my generation, my brother Si plays guitar and sings better than me but, sadly, I have no video to show you.

But I'm delighted to report that the next generation of Colgans has picked up the gauntlet. My daughter Kerys has a wonderful singing voice and my son Liam was guitarist in a metal band called This Dying Hour during his teens. The band were signed to a label and I was very proud seeing their first four track EP in record shops in London. Sadly, the lads all went their separate ways but Liam is still writing songs and there is talk of a new band coming together. Meanwhile, here's the title track from their EP:

And now his younger cousin (my nephew) Jacob has picked up the axe and started performing:

My grandchildren both love to sing so maybe it'll carry on still further? I hope so. It doesn't matter whether any of us ever got famous or made money from it; like art, music is all about self-expression and the sheer joy of participation.
Posted by Stevyn Colgan at 09:53