This week's column from the Sunday People. 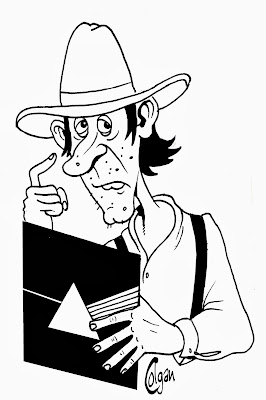 When I watched cowboy films as a child it never occurred to me that the ‘Wild West’ happened during the Victorian era. But it did, of course. The most commonly worn hat in America at that time wasn’t the Stetson; it was the Bowler. And Billy the Kid was killed in 1881, the same year that the first Boer War ended and the first ever electric street lights were switched on in Godalming, Surrey.
Interestingly, Pablo Picasso was born the same year that Billy the Kid died (1881), and died in the same year that Pink Floyd released Dark Side of the Moon (1973).

It’s curious how historical events that are unrelated to each other seem ‘wrong’ when placed side by side. For example, we think of the guillotine as something from long ago but the last time it was used to execute someone in France was in the same year that Star Wars came out – 1977. The last public execution by guillotine was in 1939 and was witnessed by movie star Christopher Lee, who was 17 at the time.

The last claimed sighting of a Dodo was reported in 1688, just a year after Newton published his Three Laws of Motion, while the building of the great pyramids of Egypt began when there were still woolly mammoths strolling about Siberia. And, despite many Americans visiting the UK to soak up the history, the Brooklyn Bridge (1883) is actually 11 years older than London’s Tower Bridge (1894).

Perhaps my favourite such fact is that Sir Bruce Forsyth was born in 1928, a whole year before Ann Frank. Oh, and Brucie has the world’s longest TV career; his first appearance was in 1939, the year that WW2 began and Batman first appeared in a comic.