This week's column from the Sunday People; everything you probably didn't want to know about fleas. 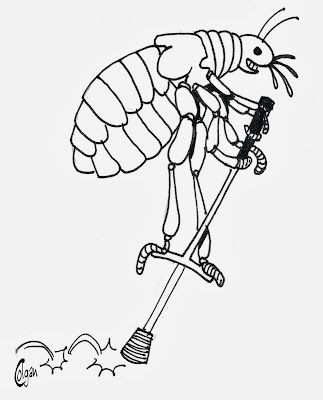 The largest species of flea, Hystrichopsylla schefferi (the Mountain Beaver Flea) can grow up to 10mm in length. But most species of flea are no larger than 3.3mm long and many are far smaller. The average flea can jump approximately 197mm vertically and a distance of 330mm horizontally, which is pretty impressive. However, claims that ‘If a flea were the size of a man, it could jump over a skyscraper’ are not true. It’s all a matter of scaling.

Imagine a cube 10mm square that weighs 1g. We can make a cube 20mm square by glueing eight of the 10mm cubes together. This cube is only twice the size of the 10mm cube … but it weighs 8g, which is eight times heavier. If we now make a cube 100mm square, it would only be 10 times bigger than our 10mm cube but would weigh 1,000g (1kg). So, if we say that an average flea is 3mm tall and an average human is 172cms (1720mm) tall, our flea would need to be scaled up by a factor of over 570 times to be of a similar size. But it would be millions of times heavier, which would prevent it jumping any higher than you can. The only fact we can say is true is that, if fleas built their own flea-sized skyscrapers, they could probably jump over them.

Interestingly, the game we call Tiddlywinks in the UK is most commonly associated with fleas almost everywhere else. The French call it Jeu de la puce (Game of the flea), the Germans call it Flohhopfspiel (The flea hop game) and the Portuguese call it Jugo da pulga (The game of fleas).

Sounds like a good name for a TV series.
Posted by Stevyn Colgan at 10:37

Email ThisBlogThis!Share to TwitterShare to FacebookShare to Pinterest
Labels: flea