This first appeared on my blog in 2010. It's worth a reprint.

As I'm sure most of you know, I was once part of an odd little team from Scotland Yard called The Problem Solving Unit that looked at the crime and community issues that traditional policing couldn't shift. Over the years we got involved in some very weird stuff. We also met some amazing problem solvers and many who were ahead of their time. One such was a sergeant from Lambeth, who I won't name, but who in the early 1980s came up with a great idea to solve the problem of kids being knocked down; sing some songs and scare the shite out of them.


The result was a slim printed volume called Road Safety Songs intended for use by police schools officers all over London. I'm pleased to report that I've clung on to my copy all these years. Now I'd like to share some of the highlights with you. 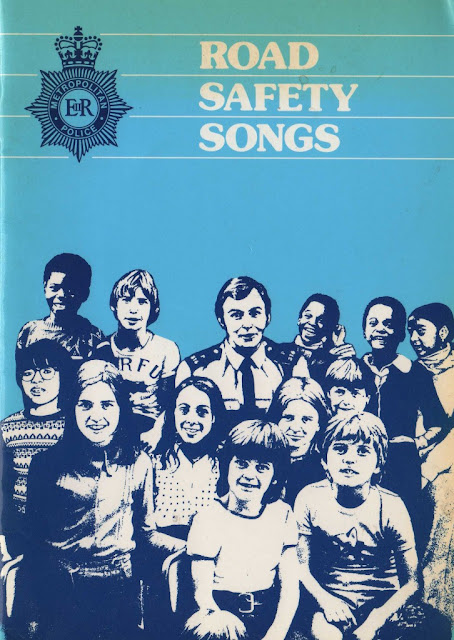 The first thing to note is that, during the course of just 18 pages, the author manages to mow down a dozen kids, mostly using lorries. Take this cautionary tale from 'To the tune of Clementine':

But she dashed right on the roadway
Never heeding brothers nine
And a lorry came and hit her
Foolish foolish Clementine.

Or the royal tragedy laid out in the gripping 'To the tune of The Grand Old Duke of York':

And a lorry came along
And knocked him off his feet,
And now all that's left of the poor old Duke
Is his statue in the street.

Or even the tear-jerking ballad of John the Brixton schoolboy in 'Ode to John' - the only song with a title and no hints as to a tune:

But then one day it happened
As John was out to play.
A lorry come and hit our John
Now he's not feeling gay.

And so it goes on. But my absolute favourite is 'To the tune of Daisy, Daisy' and it goes like this:

David, David, mind how you cross the road
You're half crazy if you don't use the Code
You may be a boy of courage
But if you don't avoid that carriage
Then you'll be sweeped right off your feet
And you'll end up in hospital.

Yes, I know I'm a bad person for taking the Mickey a little tiny bit (although some of the grammar does invite comment). However, I will say this: Sergeant X at least bothered to do his part to make the roads safer and, who knows, he may even have saved a few lives. I absolutely salute him for that. But that doesn't detract from the charming naivety of it all and the fact that 30 years later, it's still making me chuckle. So, children, remember to use your Green Cross Code and ...

Little girls and boys,
Happy in your play,
We don't want an ambulance
To carry you away.