I'm just back from three days in Edinburgh and a performance of my 'Skeptical Bobby' talk at the Fringe Festival. And what a three days it was. I've never seen the streets so packed - I assume the good weather has helped immensely. Up and down the Royal Mile, you could barely squeeze a fag paper between the heaving bodies. This was taken at 9.30am when the day had barely started. 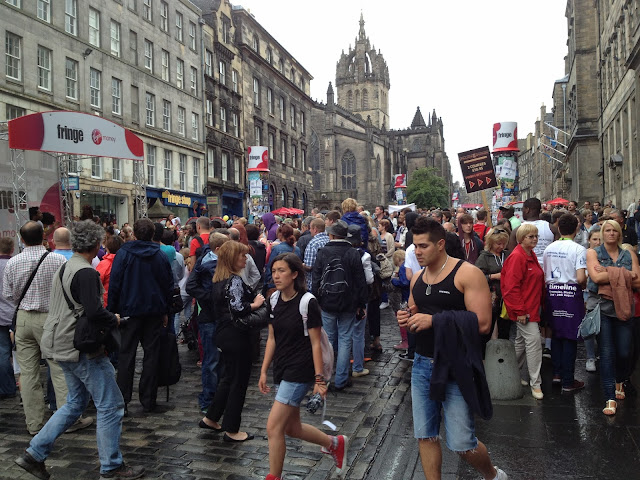 You walk up and down the streets (literally- everywhere is hills) and see things that you rarely see anywhere else: 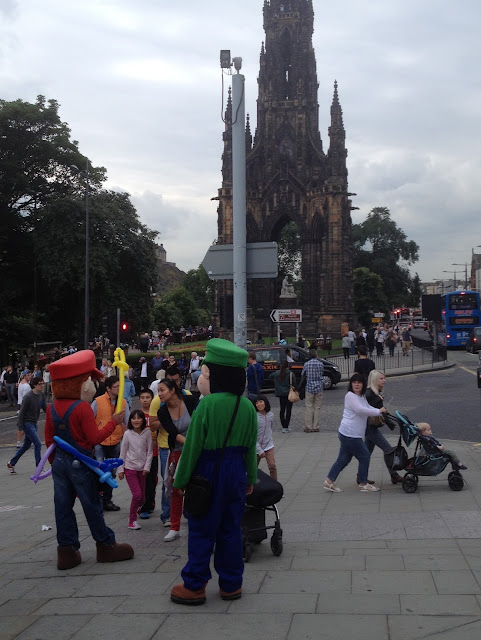 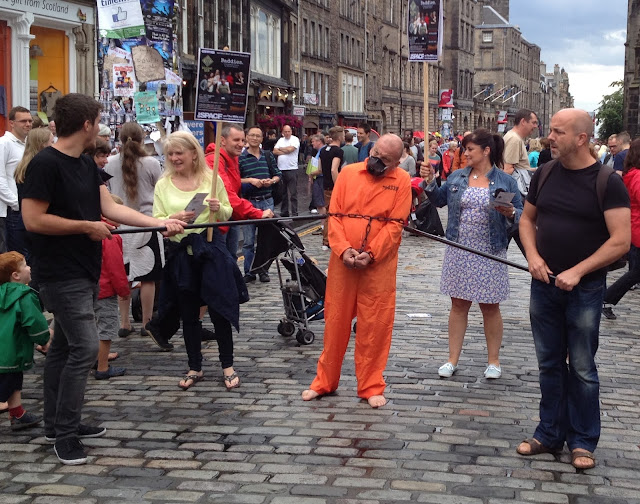 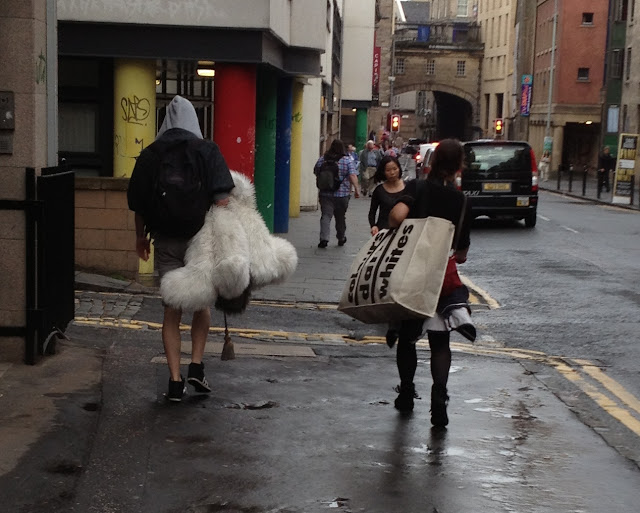 I was staying in a flat in Grassmarket, once a bit of a notorious dive but now a nice pedestrianised area of cobbles, shady trees, cafes, fossil shops, and a small crafts market. My room was on the fifth floor and had a shared kitchen area and balcony with a commanding view of the castle and tattoo: 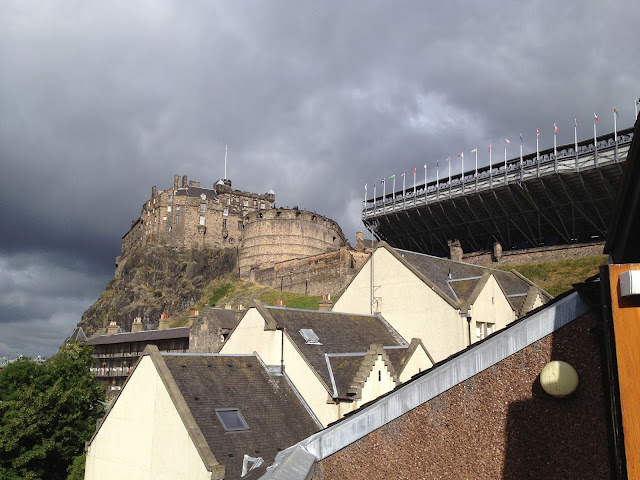 Grassmarket used to be the site of one of Edinburgh's execution gibbets. The most famous hangee was one Maggie Dickson, who lived in the early 18th century. In 1723 her husband deserted her, forcing her to leave the city and move further south to Kelso near the Scottish Borders. Here, she worked for an inkeeper and started an affair with the Innkeeper’s son which led to her becoming pregnant. She concealed the pregnancy for as long as possible and the baby was born prematurely and died within a few days. Maggie planned to put the baby into the River Tweed, but couldn't bring herself to and finally left it on the riverbank. But the tiny body was discovered the same day and traced to Maggie who was charged under the Concealment of Pregnancy Act and sentenced to death. She was taken back to Edinburgh for public execution at the Grasssmarket on the 2nd September 1724. After the hanging she was pronounced dead and her body was bound for Musselburgh for burial. However the journey was interrupted by a knocking and banging from within the wooden coffin. The lid was lifted to the sight of Maggie, very much alive. The law saw this as God's will and she was freed. Maggie lived in Edinburgh for a further 40 years and as 'Half Hangit Maggie', became something of a local celebrity. Here's an old image of Grassmarket from the period plus a photo I realised I'd taken from a similar position. You realise how old the city is when you see that many of the same buildings are still there today: 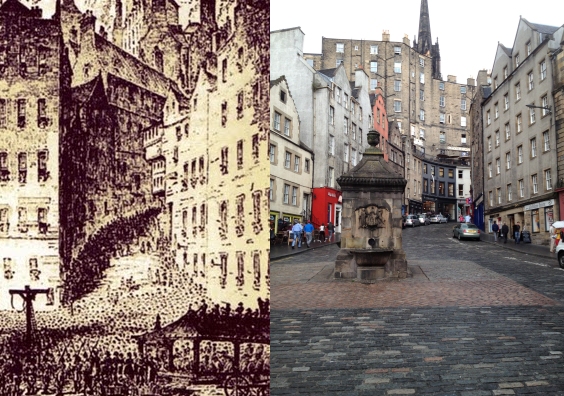 ﻿
Maggie is commemorated by two pubs, The Last Drop and the eponymous Maggie Dickson's where I attempted (and beat) their famous 'Full Scottish' breakfast. 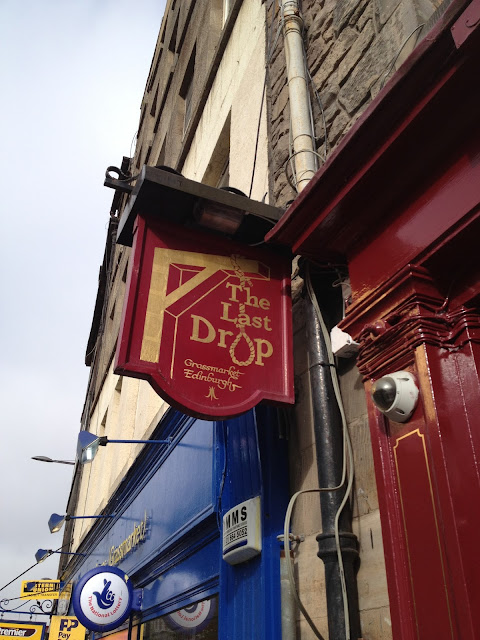 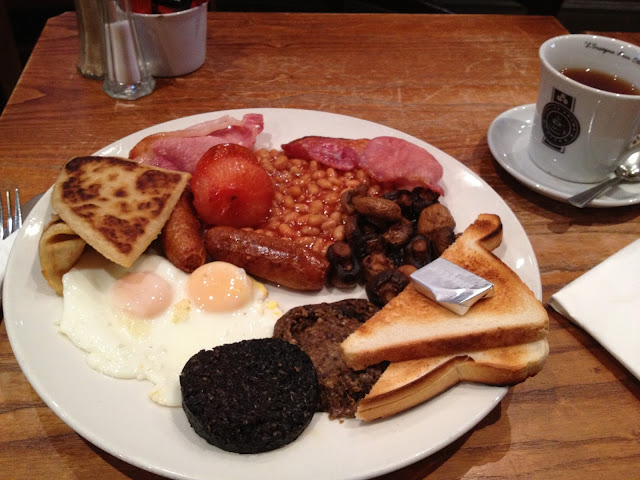 And talking of pubs, I also sank a few pints of Deuchars in what is touted as Scotland's smallest pub - the 17" by 14" (or three barmaids) wide Wee Pub (also in Grassmarket) - and the Banshee Labyrinth in Niddry Street, which is allegedly Scotland's most haunted. 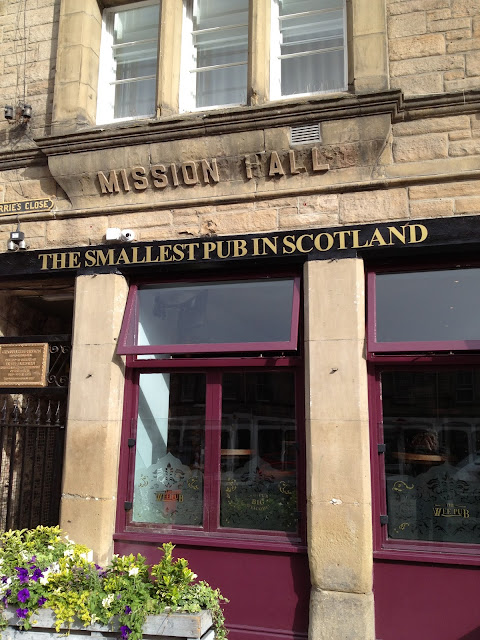 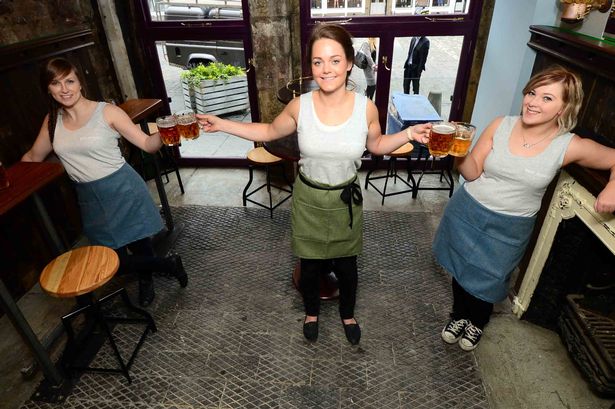 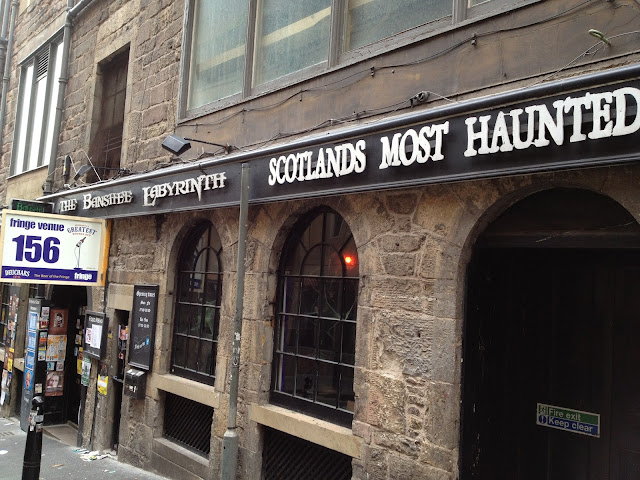 ﻿
The Banshee Labyrinth was also where I was doing my show as part of a month long Skeptics on the Fringe programme of talks by people such as Professor Richard Wiseman, Dr Simon Singh, Rhys Morgan, Dr Matt Parker and many more. My gig went well except for a moment of pure slapstick when, as I walked up to the stage, I slipped on a stone step and fell flat on my face in front of a packed house. Joy. However, I got up and did the gig ... slowly shifting to putting all of my weight onto my right leg as I'd twisted my left ankle and knee quite badly and they were swelling nicely. Despite this, the show seemed to go well and I've started to get some favourable reviews. 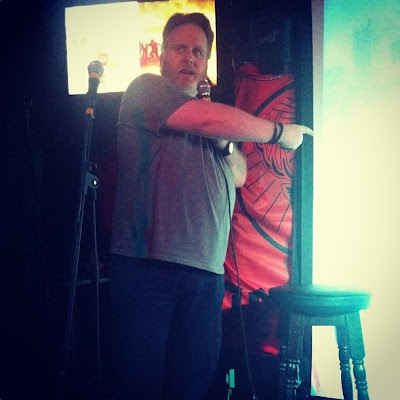 The next day I woke to find that I could barely put any weight on my ankle, which curtailed me going and seeing very much on my last day, so I'm glad I packed in as many shows and walkabouts as I did during the first two days. Of course, the ankle also meant an excruciating six hour journey home in a succession of trains and taxis punctuated by painful hobbles along platforms. And, as that bastard Fate would have it, every train I had to catch was at the furthest possible walk from the departure boards.

Ah well. A great three days. Tremendous fun. I'll do another post about my walkabouts tomorrow. Well, later today as it's the wee hours of Saturday now.

Oh, and huge thanks to the Edinburgh Skeptics - especially Keir Liddle, Dawn Gyles, Stephen Makin and Diane Waugh - for making me feel so welcome, for looking after me and for being great company over a beer or seven. A lovely bunch of people. x
Posted by Stevyn Colgan at 01:58