Okay, so here's the play by play breakdown on my latest painting - Butcher.

I was painting the Vicar and Tart painting last week and watching a lot of old British comedies. And it struck me that it might be nice to do a series of pictures of classic British stereotypes. Toothy vicars, big beefy butchers, shrewish librarians, rotund policemen, busty pub landladies, prim and proper schoolmistresses, red-cheeked colonels and bowler-hatted bankers abound in the films of the Boulting Brothers and Mario Zampi. What fun to try to capture the essence of them? Then I remembered this sketch in one of my many notebooks: 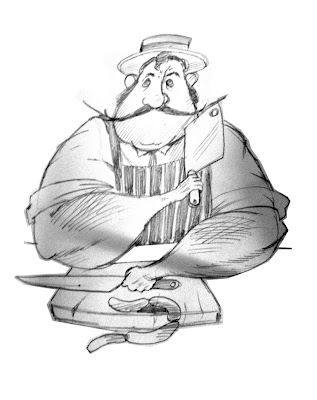 The idea was to do a butcher whose forearms looked a little like chicken drumsticks or hams. So I got me a canvas and did some scribbling and blocking in. 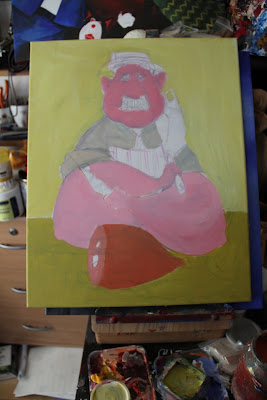 It's been such a disappointment to me that Rolf Harris has become embroiled in the Yewtree investigations. He's probably one of my biggest influences, art-wise, and I've learned a lot from him. The first and most important lesson I learned was 'get rid of the white'. It's almost always the first thing I do after pencilling. I usually then do an under-painting but I didn't for the vicar painting and didn't here either. I kind of drew on the hoof. Oh how I wish I hadn't ... 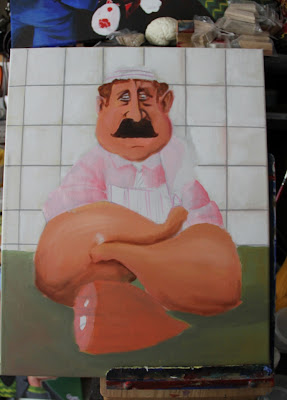 You see, an under-painting shines through your blocking in. Acrylics are only semi-opaque. Pencil doesn't show through. Almost immediately I started slapping the paint on I realised that I'd lost my drawing and had made the forearms waaaay too big. I wanted an exaggeration, yes. But this was Popeye territory. I also realised that there was something horribly wrong with the sleeves. So, while I thought about how in hell to fix it, I worked on the tiled background and the man's head instead. 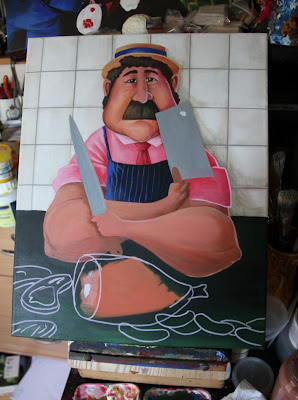 ﻿
Sometimes you've just got to be brave and make the big changes that are needed. If that means painting out a whole section with white paint and starting again - so be it. Sometimes you may need t chuck the canvas and start over. But that's a bit drastic. You can usually recover your painting and you MUST do so. You need to build on a proper foundation. On the subject of which, it was at this point that I realised that the green counter top he's leaning on was way too high; it looked like he was leaning over a wall. I'd lost my line (again) and painted the green a tile and a half too high. And his left arm and sleeve still weren't right. Out came the white paint again ... 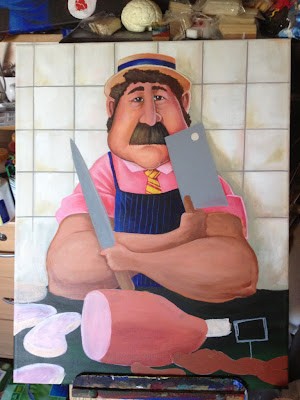 I use Daler Rowney System 3 acrylics for these paintings but I also use Uni's fantastic range of Posca paint pens for highlights and for sketching directly onto the canvas. I used them to mark out where I was going to put all of the meat products, for example. Anyway, I lowered the desktop to elbow height and things began to look better. The underpinning structure seemed pretty much there now. It was time to start painting in the detail. Oh, and to move the hole in the cleaver, which I'd put in the wrong corner. What a numpty. 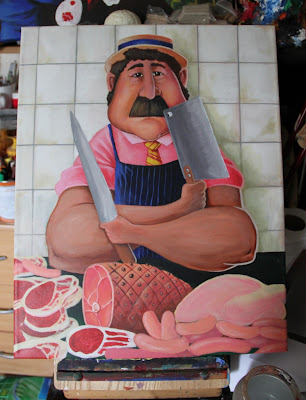 ﻿
Things seemed to go swimmingly for a while. I got most of the butcher figure completed and had made a good start on the meat, having concentrated on the glazed ham centrepiece first. I put it away for the night ... and returned to it next morning with fresh eyes. And saw immediately that I'd painted the criss-cross cuts across the ham incorrectly. They should follow the contour of the ham, not go against it. Sussarussfrassasassin' white paint ... 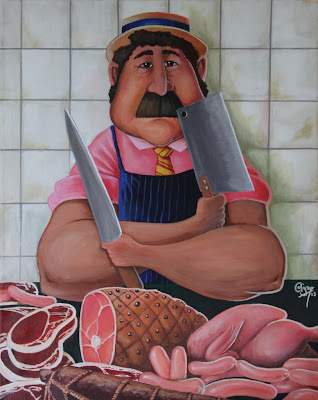 I got there, eventually. Here's the finished painting. Well, finished for now anyway. I can already spot things I want to re-do - like the hands, for example. Both different sizes and one forefinger is HUGE. There's some oinky perspective mistakes among the bacon too. But I won't worry about it for now - I'll come back to the painting in the near future.

Oh, and as a couple of people asked, the brushes I use most commonly are Cotman or Royal Taklon brushes. For this painting I used a 5/8ths, 1/2", and size 1, 3 and 5 brushes and Posca pens.  The canvasses are cheap ones from The Works. After all, I'm still practising and teaching myself. I'll buy decent canvasses when and if I ever earn any money from this! 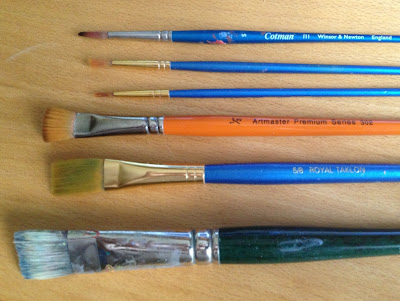 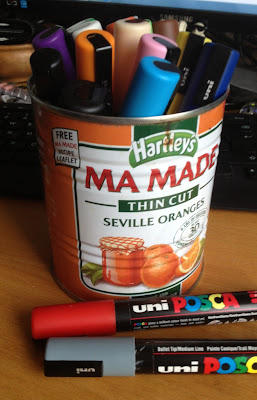 So there you go. Another one in the can. And if you're interested in how big it is, here you go: 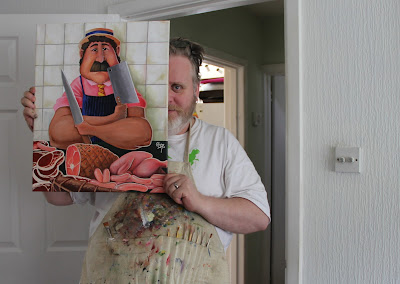 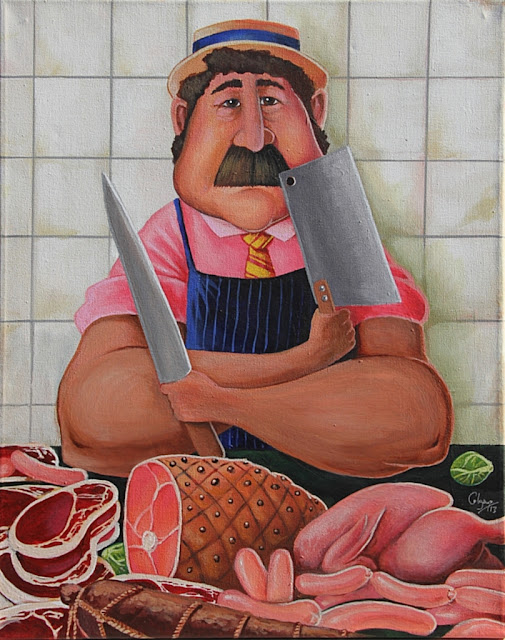