This time last week I was on my way to perform at the Latitude Festival. I was doing a slot for Salon London with Dr Suzy Lishman the eminent pathologist, and Booker Prize judge, comedian and classicist Natalie Haynes. Suzy was going to do a virtual autopsy of the brain, Natalie was going to talk about how the ancients philosophised about thought and memory, and then I was going to talk about lateral thinking. Sadly, however, someone whose brain wasn't quite working properly mucked it all up for us. A chap got up on the roof of Ipswich Station and was threatening to jump in front of the next train that came his way. Consequently, all trains going in that direction were cancelled and I found myself stranded at Liverpool Street Station in London, along with an ever-growing crowd of frustrated festival goers. 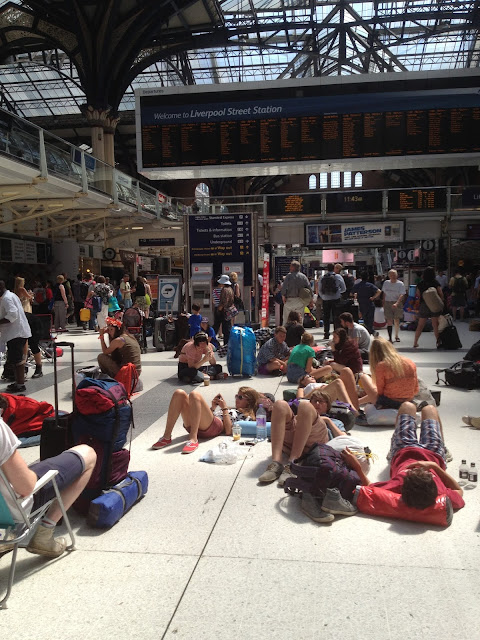 And, as the morning wore on and turned into afternoon, it became more and more crowded and ever so much hotter because the station has a glass roof and it was in the high 80s outside.

At 1.30pm it became intolerable and I also hit the cut off time where I'd be able to get to the Latitude site in time for my slot. Natalie couldn't get there either. So I phoned the organisers for a hasty conflab and we hit upon a cunning plan ... maybe I could do my piece remotely using technology? Using something like the Facetime application on my iPhone would have been ideal but, sadly, the WiFi at the station was next to useless and it wasn't so good at the Latitude site either. However, we were able to rig up a phone link to the speakers in the Literary Arena. So, it was suggested that the crowd give me 10 things to link together, I go away and figure out the connections while the other acts went on, and then I'd return and read my answers to the Latitude audience over the phone.

So that's what we did. As WiFi was rubbish, I knew that a lot of the work would need to be done from memory so I asked the crowd for 10 things beginning with K; having just helped write and record 16 K-themed episodes of QI for the new series, there was a lot of fresh info in my head.

The good news is ... I did it. I won't reveal my answer as it might spoil some of the treats in store when QI returns to your screens in September. All I will reveal is that the 10 things I had to connect were: kittens, kites, knickers, ketamine, knives, kayaks, kissing, knockers, kangaroos and the Kardashians.

And the link I suggested between the final two was that female kangaroos and the Kardashians both have three vaginas.

Such a shame not to get there in person but at least the audience got a show.