Since speaking at QEDCon at the weekend, I've had lots of very kind and complimentary emails, tweets and comments and I feel very flattered. Thank you! Meanwhile, people have also asked if I can summarise the key points of what I talked about and maybe describe my methodology and some of the main tools and techniques I used when tackling crime and community safety problems. Well, it would take a whole book to cover it all. I could write that book (and, indeed, my agent has been pushing me to do so) but it doesn't exist yet. So, in the meantime, here's a rough bluffer's guide.

I worked for the Metropolitan Police Problem Solving Unit. Our little team - five cops and an analyst - all came from a variety of backgrounds and we all had some expertise in a range of skills and knowledge. Our job was to help others to find sustainable solutions to persistent problems that hadn't responded to traditional enforcement methods. And by 'enforcement' I'm talking about the widest possible range of legal options available to public-service organisations all working together in partnership; organisations like town and county councils, local authorities, housing departments, social services, schools and colleges, health trusts, fire and rescue etc. Incidentally, that 'partnership' word will crop up time and time again. It's not just a nod to political correctness or a fashionable buzz-phrase. It was a really vital component of what we did. Problem solving isn't just a case of coming up with a bunch of mad ideas and hoping that one of them works. It's a science. And it can be used for tackling anything from dog poop on the pavements to international terrorism. It works like this. Crime, and indeed all problems, have three components: 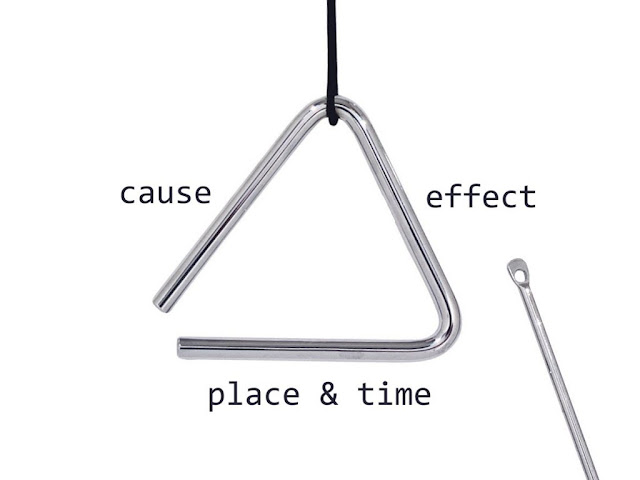 There is always something or someone that is causing the problem, someone or something that is affected by the problem, and a place in time and space where the two of them come together - that's where and when the problem occurs (i). This may seem like common sense. And it is. But our natural tendency as human beings is to simplify matters, so we tend to focus only on the cause. If I can use a medical analogy here, if your problem is malaria, focusing on the individual mosquitoes is all very well. But, while you're doing that, the swamp you didn't drain is breeding a million more and the potential victims you didn't inoculate are being set up as new targets. If you want a more complete and sustainable (there's that word again) solution, you must tackle all three sides. That means tackling the root causes of the problem, not just the symptoms. 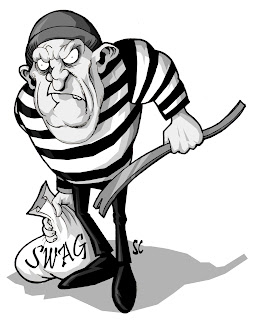 Take burglary for instance. The police can arrest as many burglars as you like but burglary won't go away. That's because there will always be a steady stream of motivated offenders (cause) ready to fill any 'job vacancy' created by the arrests. Meanwhile, if the victims (effect) continue to act in much the same way as they always have and the location (space-time) remains unchanged, the offender's job is made that much easier. They have a template to work from - all of the previous successful burglaries in that area. Therefore, the best way to tackle burglary is to adopt a three-pronged problem solving approach:

Sometimes, however, the obvious solutions don't work and, despite our best efforts, the problem persists. Sometimes this can be due to a wholly random factor that we cannot predict or change. Homicide is a good example of this. While some are predictable, the vast majority are spur of the moment and therefore completely unpredictable. So we have to be more creative in our approach. At QEDCon I mentioned something called The Impact Scale (ii) and showed this slide: 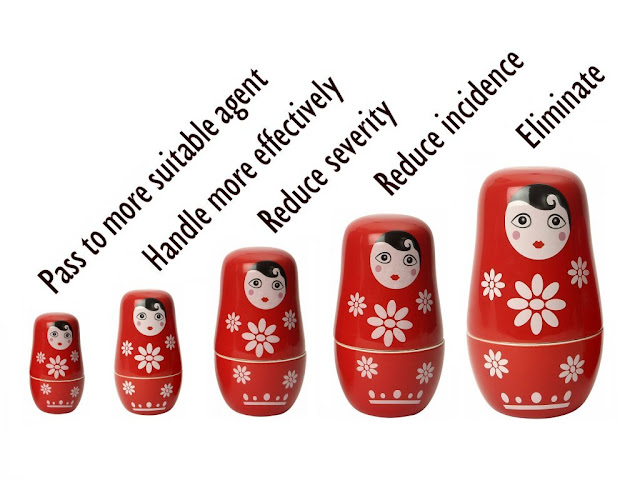 If you can eradicate the problem - great. But it will be a very rare instance that you do. If you can reduce how often it happens, that's great too. But it doesn't necessarily help anyone for whom the problem is still very real. So, can you reduce the impact it has on them by limiting the severity? Graffiti is endemic and a nuisance but mostly harmless. However, when it is abusive, or singles out individual persons or groups, it can cause fear and distress. So you reduce the severity by tackling that graffiti first. However, if, like homicide, it's not always possible to prevent a problem from happening then get better at dealing with it. Have well-rehearsed contingency plans. Educate people. By all means, bring in knife control measures and keep the pressure on gang members to stop stabbing each other. But why not also teach them some first aid skills? It means that if the worst case scenario occurs, a life might be saved by handling the incident better. The final option of 'pass to a more suitable agent' isn't admitting defeat; it's simply acknowledging that some agencies or individuals may be in a better position to lead on tackling the problem. They may have specific knowledge, better resources, better training, different but more useful legal powers. And you can still work with them of course.

If you had a park nearby but were afraid to use it because aggressive drunks go there every afternoon and then fall asleep on the park benches ... what would you do? You've tried traditional methods like asking them to go or calling the police. But these people are locked into a lifestyle they find impossible to break free from, and they are often so drunk that any attempt at communication is fruitless. 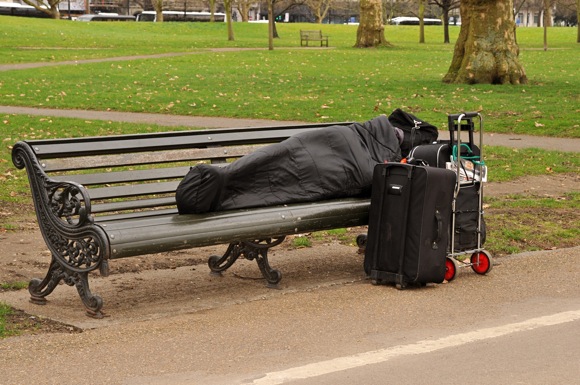 It would be easy to take the one-sided triangle approach and keep on arresting the drunks or chasing them away. But, as I said, that won't provide any degree of permanency. You just create a vacancy for other drunks. Or we could take an equally one-dimensional approach and simply remove the benches. But that punishes everybody. Where will the pensioners sit? Or the young parents? And aren't some benches wearing memorial plaques? The donors' families won't like that.

So how about a solution that looks at all three sides of the triangle instead? How about firstly changing the design of the benches? 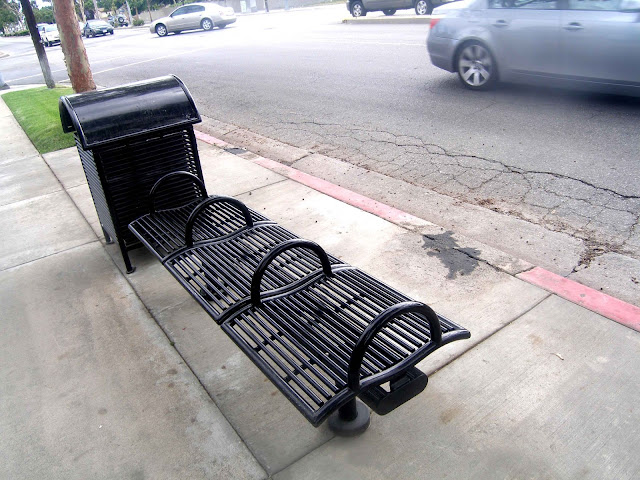 This doesn't disadvantage the lawful park users (victims) and the visual effect on the location in minimal. A lot of people probably wouldn't even notice the substitution. But the drunks will. Oh yes. Now they can't sleep on the benches any more and there's a good chance that they'll move on elsewhere.

But solving a problem is a very different thing to pushing it elsewhere. And just changing the environment is only changing one side of the triangle. If we think of these people - the offenders - as the victims too, then maybe we can work in partnership (I warned you about that word) with families, outreach workers, social services etc. to offer these unfortunates a way off of the Hellish merry-go-round that is their life. That's a complete solution. That's problem solving done properly.

So that's a very quick guide to the kind of work I did with just a few examples. The important things to take away are:


I've barely scratched the surface here but, hopefully, it's given you a base upon which to build. I'm always contactable of course and I'm always up for coming to you to give talks.

And maybe I should get on and finally write that book ...

(i) This 'problem analysis triangle' was distilled out of the work of professors Marcus Felson and Lawrence E Cohen who developed Routine Activity Theory. When examining crime specifically, we would change the headings to Victim, Offender and Location ... but the same rules apply.
(ii) Developed by Professor John E Eck in his 1987 paper Problem-Solving: Problem-Oriented Policing in Newport News.
Posted by Stevyn Colgan at 09:35