Le Baron at The Embassy Mayfair in London was the venue last night for Unbound Live 3; an evening of readings, talks and general tomfoolery by a bunch of authors who all have books either funded or part-funded with Unbound Publishing. You get to Le Baron by walking through a set of plush leather-covered doors and descending a staircase. Once you get downstairs, you find a cosy cellar club - very cool, very sophisticated - the kind of place where beat poets have throw-downs and B-list celebs hold birthday parties for their chihuahuas. The first thing that greets you as you walk in the door is a six feet tall sculpture of Mickey Mouse in bright pink fibreglass. Good grief. I'm told it's a Jeff Koons (it doesn't look like it to me - it kind of looks more like a Ron English - but I will track down the artist). All I know is that it's very very scary. And just a little bit humbling. 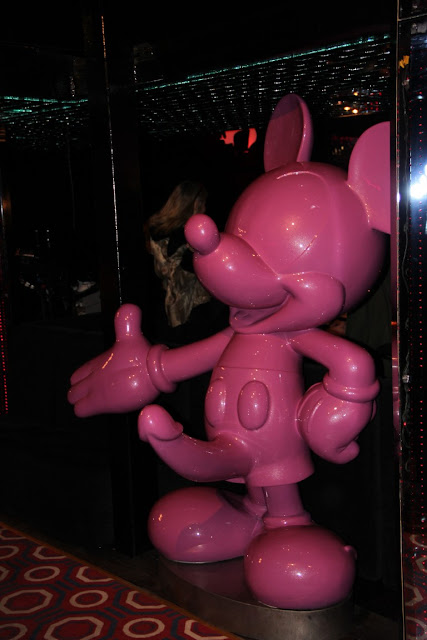 The second thing I spotted was this notice behind the bar ... 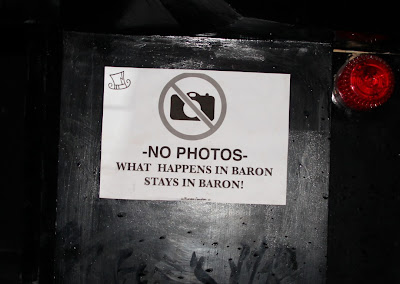 ... which I immediately took a photo of. Many private clubs do, of course, have a no photo policy. It's nice to have little havens where the paparazzi are politely invited to feck off. However, because this was an organised event and not a normal members night, I could snap away with impunity. So I did. And here are a few of the pictures I took. 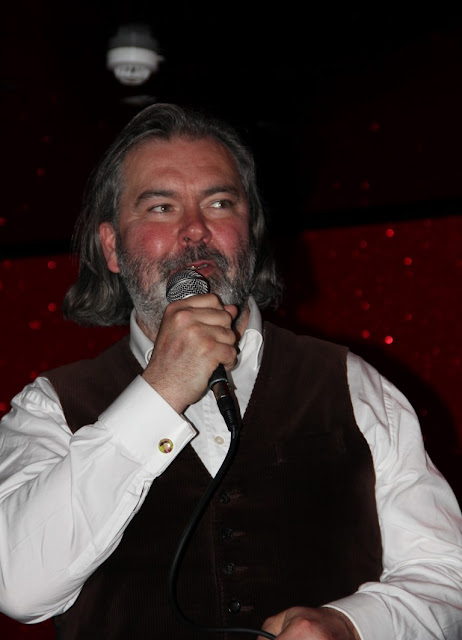 The evening started with a rousing introduction from Unbound co-founder John Mitchinson followed by Mr Robert Llewellyn reading from his Utopian novel News from Gardenia. It's a lovely book - I've read mine already - which has a genuinely positive view of the future. Robert gives us a story in which a chap from the present day is thrown 200 years into the future but, rather than the usual post-apocalyptic or dystopian societies so beloved of Hollywood and sci-fi novelists, in this future we got it right. The book shows us how things could be if we make the right choices now about technology, fuel, even how we choose to live our lives. As you'd expect from someone with Robert's CV, his reading was funny, animated and great to listen to. But could I wheedle any snippets from him about the new series of Red Dwarf? Could I smeg. 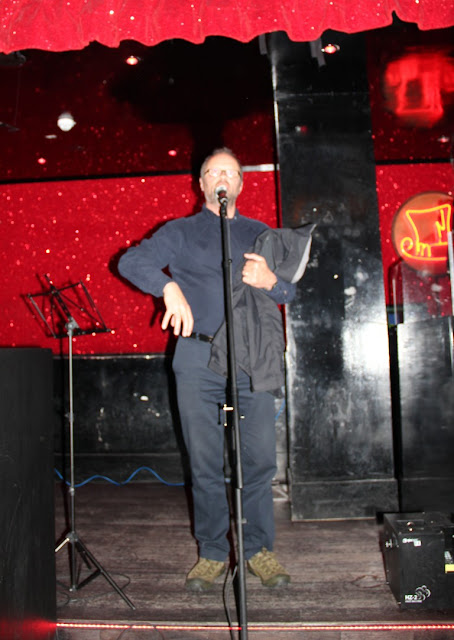 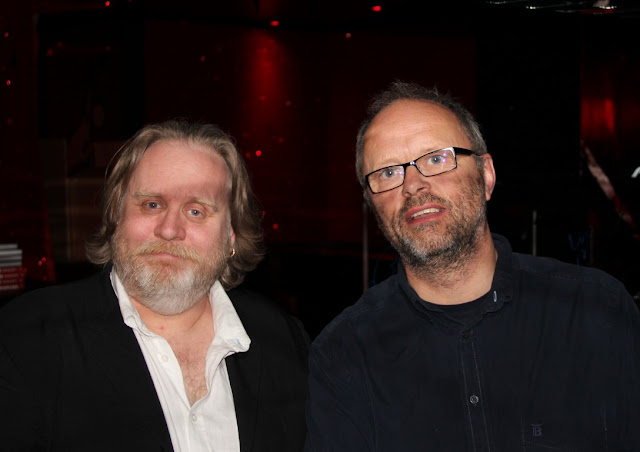 Then it was me, doing my bit to convince people to fund my new book Constable Colgan's Connectoscope. It seemed to go okay. No one threw anything anyway. Well, nothing too hard or spiky.

I was followed by the always entertaining Adrian Teal with a pitch for his excellent Gin Lane Gazette. His lurid tales of Georgian debauchery were hilarious - even more so because they were all true. I was particularly amused by the tale of how John Wilkes hid a baboon in a trunk and smuggled it into a meeting of the notorious Hellfire Club. During a mock black mass, the animal was freed from the box, causing many there to believe that the Devil had made an appearance. It just so happens that I live about three miles from the Dashwood estate and the Hellfire caves so it's a story I know well. I've rarely heard it told so humorously though. 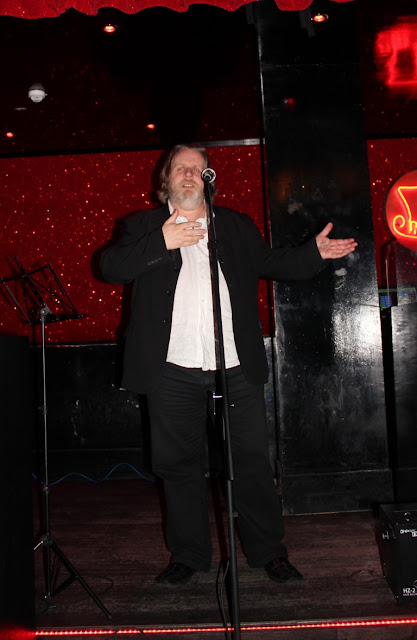 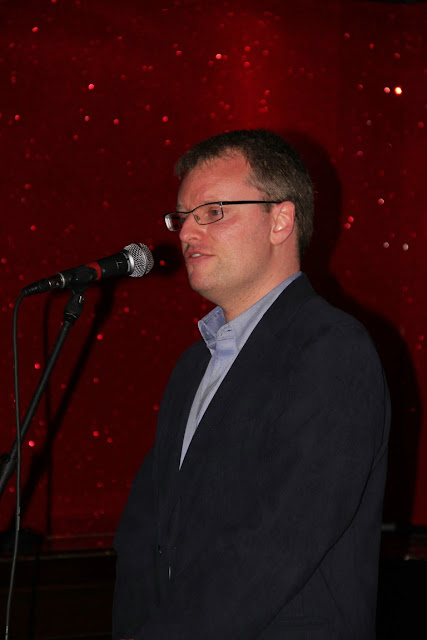 We then had some spirited poetry from George Chopping's Smoking with Crohn's anthology and a musical interlude from the very talented Miss V. George had even gone so far as to write an anthem for Unbound which he sang with some gusto and in a variety of keys. Miss V, thankfully, was very much on key and has a glorious voice. She serenaded us beautifully as we scrabbled at the bar during the intermission and tried to avoid bumping into Mickey's nob. 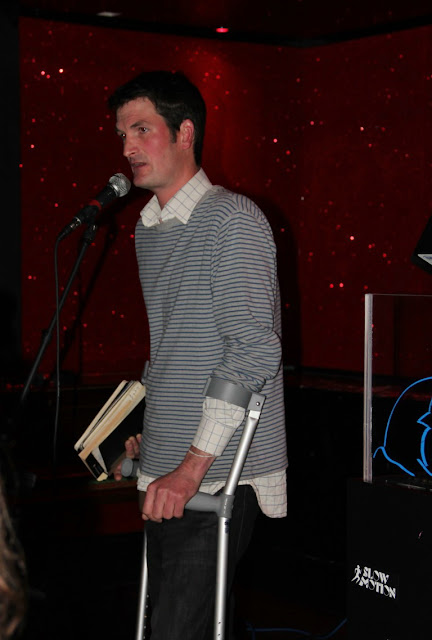 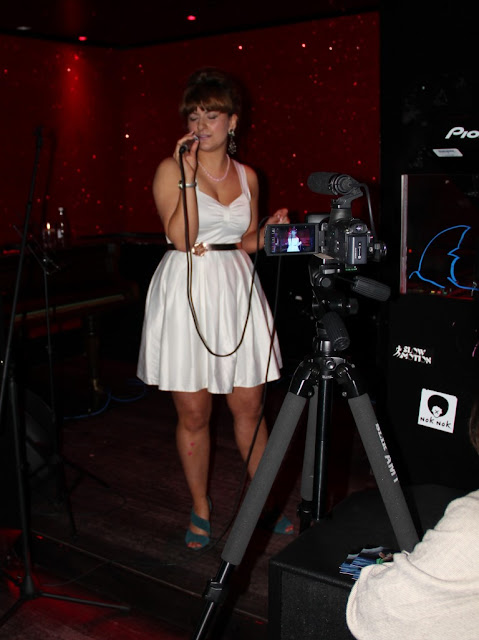 Part Two kicked off with Keith Kahn-Harris plugging his book The Best Waterskier in Luxembourg. It's a wonderful collection of big fish in small ponds celebrity stories. Don't you want to meet the best heavy metal band in Botswana? Or the most powerful politician on Alderney? I know I do. I'm really looking forward to this book. Then comedian Katy Brand took the stage to read - for the very first time anywhere - an exclusive chapter from her first novel Brenda Monk is Funny. It's clearly semi-autobiographical in nature and the extract we heard gave some idea of the trials and tribulations of being a female stand-up comedian. I'm delighted to reveal that Katy is appearing in the new series of QI that starts recording shortly. 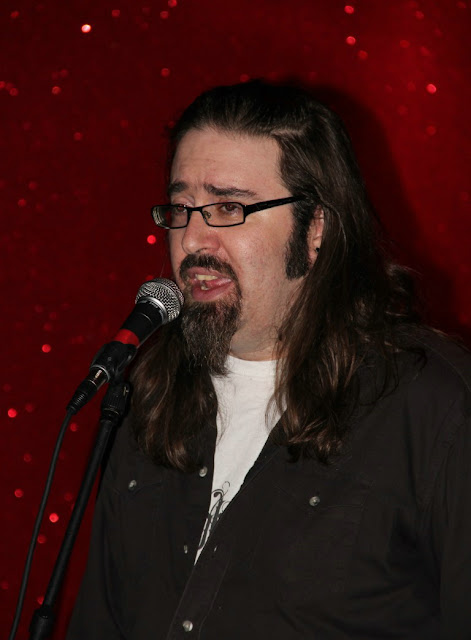 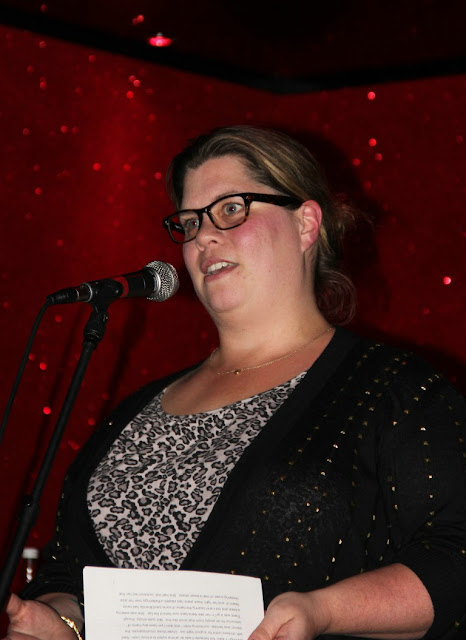 The performances ended with comedian, chef and ranconteur Hardeep Singh Kohli telling us all about his book A Month of Sundays; a celebration (with recipes) of the sadly disappearing tradition of getting the family together on a Sunday to eat, drink and be merry. Here he is - the only man cool enough to wear shades in a darkened underground nightclub - and demonstrating why he's kniown as the Chic Sikh. Or will be from now on. 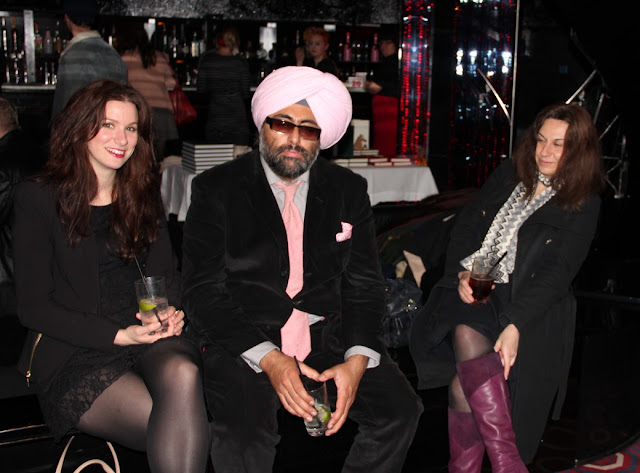 Hardeep said something quite profound during his talk. Well, he said a number of profound things but, having drunk much of central London's Cornish brewery beer supplies, I can only remember the one that struck the deepest chord with me. It went something like 'Unbound is publishing the books that traditional publishers are too arrogant or too short-sighted to publish. This is the future. We've seen it happen with music, now it's happening with books; it's the consumer who should be making the decisions, not the accountants.' I couldn't agree with him more.


It was a very entertaining evening and it was nice to meet people who, although they weren't speaking, also have some great projects on the go. Joel Meadows was there, whose Tripwire at 20  is a wonderful anniversary book for one of the best - if not the best known - genre magazines on the market. Legendary 80s clubland photographer Graham Smith was there too and I did make off with a signed copy of his We can be Heroes. I also met up with old frends and Twitter chums Mo McFarland, Steve Hills, Terry Bergin, Stuart Witts, Xander Cansell, start up genius Robert Loch and film director Richard Butchins.

A great night out - roll on Unbound Live 4. And if any of the books I've mentioned sound like something you'd want to read, follow the links and pledge!