The news that J K Rowling has been 'outed' as the author of the crime novel The Cuckoo's Calling has caused me some mixed emotions. The book, supposedly written by a former RMP investigator called Robert Galbraith, sold fewer than 500 copies before the secret leaked, which isn't a huge amount but is a realistic number for an unknown first-time author. I don't know if J K got an reasonable advance for the book but I suspect not; certainly not enough for an author to live on while she wrote it. The days of the decent advances have long gone - unless you're famous. Not that J K has to worry about such things of course. 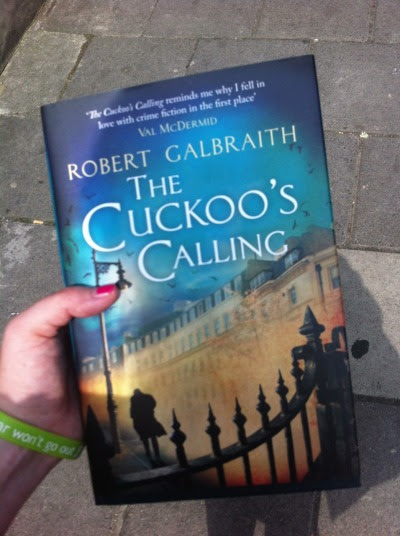 The book enjoyed some good reviews although it's also known that several publishers rejected it. Only one, to my knowledge, has owned up; Kate Mills, the fiction editor at Orion Books, admitted on Twitter that she had turned it down, saying: 'So, I can now say that I turned down J K Rowling. I did read and say no to Cuckoo's Calling. Anyone else going to confess?' She later told The Telegraph: 'When the book came in, I thought it was perfectly good - it was certainly well written - but it didn't stand out. Strange as it might seem, that's not quite enough. Editors have to fall in love with debuts. It's very hard to launch new authors and crime is a very crowded market.' All of which means that 'Robert Galbraith', without the support of being a celebrity, apparently managed to write a book and get it out there without the support of being a celebrity, which, in today's climate, is heartening and brilliant. J K herself has said that 'It has been wonderful to publish without hype or expectation, and pure pleasure to get feedback under a different name'. The news initially made me smile and gave me hope that the industry is slowly moving away from its obsession with celebrity. It also made me smile because it appeared that J K Rowling had proven to the critics that she can write a decent book and not simply live off the success of the Harry Potter franchise.

But then came the news that, since the revelation, sales of the book have risen by 150,000% and that The Cuckoo's Calling has soared more than 5000 places up the Amazon best-sellers chart. Which means that thousands of people who wouldn't otherwise have poked the book with a shitty stick have now purchased a copy simply because Ms Rowling wrote it. That sends a pretty strong message doesn't it? The public is still as obsessed with celebrity as it ever was and I therefore can't blame publishers if they pander to their desires. It's supply and demand. The next Galbraith book is going to cost the industry a fortune. My smile was starting to fade.

And, as I read more and more about the affair, my ex-police officer investigation glands started to kick in and things started to smell like very clever marketing. J K may have been acting wholly honestly when she wrote the book under a pseudonym to see whether the strength of her writing would stand up without the crutches of her celebrity. But I do find it hard to believe that The Sunday Times, which supposedly had its 'suspicions aroused' and 'did further investigation to find the truth about Galbraith' hadn't had a tip off. Why else would they have identified one crime book - that had sold 445 copies - among the thousands published annually as worthy of 'further investigation'? It doesn't stand up to scrutiny. And if there was a tip-off, where would it have come from? Is it just coincidence that the book was published by Sphere; the same imprint that published her previous adult book, Casual Vacancy? What does that mean? Was that the plan all along? Or is it the fact that it was rejected by every other publisher?  Her spokesman said: 'I can confirm the book was treated like any new novel by a first-time writer. We are not going into any more detail than that or commenting further.' Hmmm.

If I come across as cynical, it's because I am. I wish J K all the best; goddammit I wish I was in her position. She's a good writer and no one can argue with her success. But this story, which initially tasted as sweet as candy floss, has now turned to ashes in my mouth. The Cuckoo's Calling is very probably an excellent book and I will get around to reading it. But everything surrounding the book points to a very clever piece of marketing. All of which means that we're no better off than we were; the money available as advances for the real Robert Galbraiths out there, who don't have the free time and the personal wealth to write their own Cuckoo's Calling, is going to remain pitifully low and the chances of getting a book published if you're an 'unknown' are just as remote as ever.

As I said, mixed emotions.