Mitchell and Webb (and me)

Here are two very odd things that I own. They're paintings on canvas. And they were commissioned for use in sketches for the BBC series That Mitchell and Webb Look. Both were featured in the 'Get me Hennimore!' segments; a series of running sketches that spoofed 1970s sitcoms. Here's the first painting, a Christmas scene with David Mitchell's 'Boss' character as Santa: 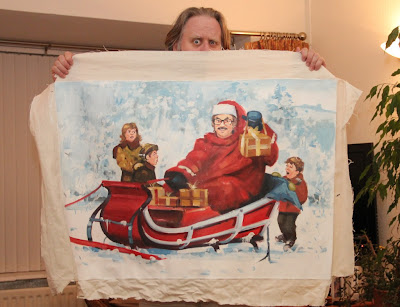 You can watch the sketch it appeared in by clicking here. I would have put the video on my blog but whoever posted it to Youtube disabled the embedding and I can't find an alternative link. Pft.

The second painting is this rather bizarre piece, also from a Christmas-related Hennimore sketch: 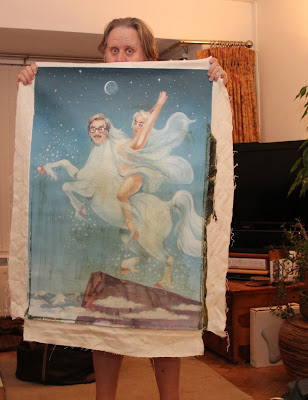 And this time I can embed the video;

So how did end up with these paintings? Bizarrely, I found them, and all the others featured in the series, for sale on ebay. Bids were low so I got in there and bagged two of them. It was just a chance find, simple as that.

I have no idea what I'll ever do with them but it's nice just to own a teeny tiny piece of TV comedy history.
Posted by Stevyn Colgan at 23:49