I appeared on my first panel show recently. And here it is:


Sony Award-winning Do the Right Thing is hosted by Danielle Ward and the team captains are Michael Legge and Margaret Cabourn-Smith. Each team captain is aided and abetted by a guest comedian and the teams have to describe how they would cope if presented with a particular scenario. It goes out as a podcast and is definitely too rude for radio. 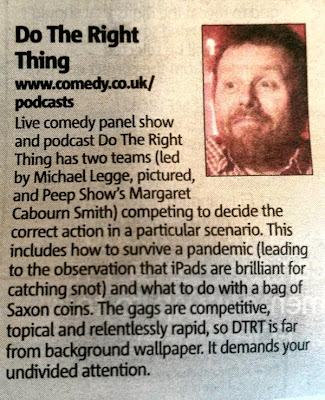 Here's how the show was reviewed by Elisabeth Mahoney in The Guardian:

'Do The Right Thing, a new panel show podcast recorded in a pub, sounds so like something you'd hear on Radio 4 it comes as a shock when the air turns blue. 'It's not fucking QI!' host Danielle Ward tells contestants in the second episode. As the programme ends, the audience applause fizzles out a little. 'Keep fucking going!' she yells. Language aside – and, you might want to note, there are quite a few c-words – it's not surprising this feels so Radio 4: producer Ben Walker has worked on The Now Show and the Vote Now Show, as well as producing Richard Herring's podcast, As It Occurs To Me. And it is mostly very funny, with a tendency towards the peculiar as guests riff on the idea of doing the right thing in different scenarios. That might be when you're accidentally buried alive. A vegan contestant thinks of his body feeding the worms and insects: 'Maybe I should just die.' 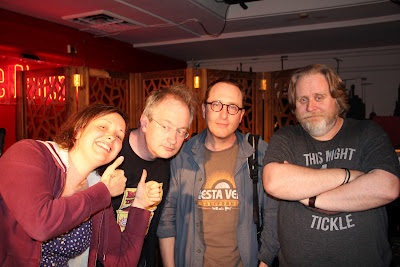 Other rounds involve asking an expert and posing questions to an agony aunt. This uncovers creepy tales of first kisses ('her first boyfriend learned to kiss with his mother'), tips of triggering labour late in pregnancy ('have you tried being shot out of a human cannonball?') and a paramedic faced with a bridegroom who'd aspirated a pickled onion. It didn't end well.' 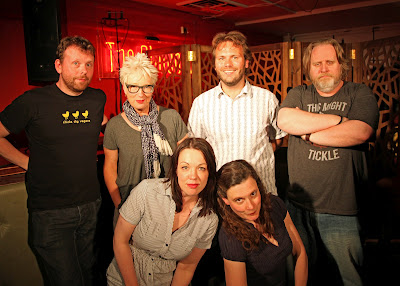 I was the 'expert' in 'Ask the Expert' round of the show that I appeared on, with Jenny Eclair and John Finnemore. Two episodes were recorded that day and the expert for the other was Jon Ronson. His panelists were Robin Ince and Josie Long.

You can hear all of the episodes broadcast to date from series 1 and 2 by visiting here. And I advise you to do so. It's great comedy.