Here's the painting that I've been working on this past fortnight. It may well be adorning the jacket of my new book, Constable Colgan's Connectoscope in a couple of months time. 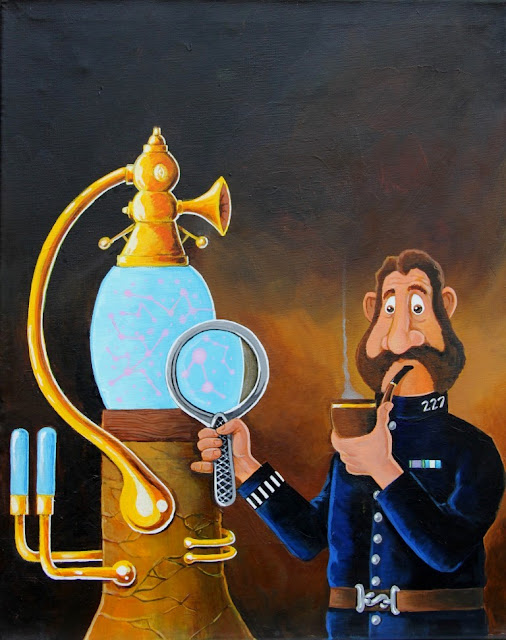 As you know, I'm publishing the book using the crowd-funding site unbound.co.uk and, at one of the pledging levels, you'll be getting a very limited edition high quality signed print of the painting. But, if you can't afford that, don't dismay. For when I reach that magical 100% funding target, one lucky supporter will win the original painting - and it doesn't matter what level you pledged at. The painting is in acrylics and painted on a 1cm deep box canvas that measures 50 by 40cm. Or about 20 by 16 inches.

So pledge now and be in with a chance!

Here's me pimping the book at Unbound Live 3 a week ago.

Oh, in case you're wondering if the 227 number on the constable's collar is deliberate, it is. 227 was my first and last 'shoulder number' when I was a police officer. London Metropolitan Police officers get issued with a six figure warrant number (that doubles as a pay number) that stays with them for their career. However, there are over 30,000 officers in London and that's a lot of numbers to fit on a pair of epaulettes. So, each London borough gets an allocation of numbers and a dual letter suffix that denotes borough and division. My first ever shoulder number was 227. And because I worked in Hillingdon borough on Ruislip division I was 227XR. Throughout my 30 years service I worked on various divisions and in several CO (Commissioner's Office - Scotland Yard and Hendon Police College) departments and my shoulder number was, at various times, 827CV, 2253CO, 330XD, 1565CO, 2563TS and, for my very last posting, 227CO. So now you know.
Posted by Stevyn Colgan at 01:28