Yesterday's Wasabi Fire Alarm demonstration has been reported by several people who were there. Here's how Tom Whipple of The Times reported it:

Fire alarm that sets your lungs burning as well 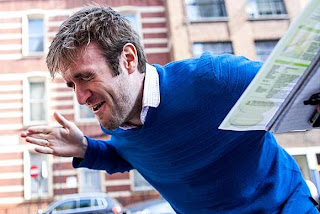 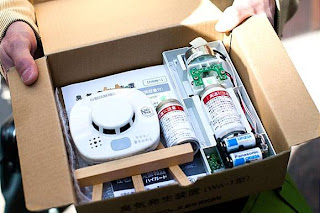 There are, I suppose, things to be grateful for. First, that I was testing a wasabi-based fire alarm, rather than a rotten eggs or smelly socks fire alarm. Both were tried as prototypes. Second, that inhaling a fine aerosol of Japanese horseradish is considerably better than being burnt alive.

But neither of those thoughts occurred as the fiery spray hit my nose, made its way down my windpipe and entered my lungs. Doubled up, coughing and crying a little, my main thought was: “This is a very silly way to save people from fire.”

On that, however, I was wrong. The wasabi fire alarm is the winner of this year’s Ig Nobel award, awarded for discoveries that “first make you laugh, then make you think”.

Makoto Imai, the Japanese co-inventor, has installed a working model in the Science Museum in London and is taking it on a nationwide tour to coincide with British Science Week. In doing so he is demonstrating a solution to a deadly serious problem: how do you wake deaf people in a fire? “By delivering a stinging sensation to your mucus,” answered Professor Imai.

The Ig Nobels were created by the American writer Marc Abrahams in 1991 as a way of rewarding scientific research that happens to be funny.

Special commendations this year went to a study investigating contagious yawning in tortoises and another testing how decision-making is affected by the need to urinate.

In past years, Britain has done particularly well in the awards. “Japan and the UK are the only countries I know of where, if you’re eccentric, people are proud of you,” Mr Abrahams said. “In other countries, they want you to go away."

The wasabi fire alarm will be demonstrated at the Ig Nobel roadshow, which is in Edinburgh tonight, and tomorrow visits the University of Dundee, where Ben Wilson, a Scottish marine biologist and Ig Nobel laureate, will give a talk on his studies into communication in herrings via the medium of farts.

And there's a great write-up by Faraz Mainul Alam on his always entertaining Memoirs of a Defective Brain blog. He also provided me with this video: