Here's an extraordinary thing I learned today. When Disney released Mary Poppins in 1964, they were taken to court by two songwriters for copyright infringement. Patricia Smith and Don Fenton had written a song over 10 years previously that was recorded in 1949 by Alan Holmes and His New Tones (you can hear it by clicking here or on the image below) and, in 1951, by The Arabian Knights. Their song was called Supercalafajalistickespeealadojus and, unsurprisingly perhaps, the authors suggested that Disney's Supercalifragilisticexpialidocious - written by the Sherman brothers - was ever-so-slightly similar. 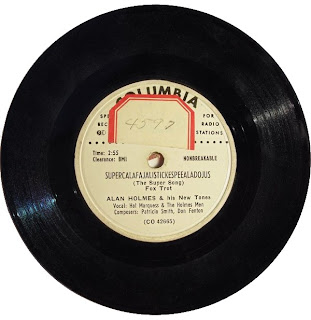 Disney successfully defended itself by claiming that Supercalafajalistickespeealadojus was a 'common slang word'. Sure enough, a chunk of the word appeared in the 1942 movie The Undying Monster (directed by John Brahm, screenplay by Lillie Hayward and Michael Jacoby), when the character Rob Curtis (played by James Ellison) says of character Christy, 'She has an overactive supercalifragilis.' He goes on to define the word as 'female intuition.' But a 'common slang word?'

To further complicate matters, in a 2007 interview with the LAist online magazine, co-writer Richard Sherman states that it was ' ...  a word we sort of concocted from our childhood when we used to make up double talk words. In the screenplay version of Mary Poppins we wanted her to give the children a gift they could bring back with them from inside the chalk drawing when they came out into the real world. If it was a tangible thing like a seashell or pine cone it would disappear. So we said, Remember when we used to make up the big double talk words, we could make a big obnoxious word up for the kids and that's where it started. Obnoxious is an ugly word so we said atrocious word, that's very British. We started with atrocious and then you can sound smart and be precocious, we had precocious and atrocious and we wanted something super colossal and that's corny, so we took super and did double talk to get califragilistic which means nothing, it just came out that way. That's in a nut shell what we did over two weeks. All together you get Supercalifragilisticexpialidocious.'

Incidentally, the roots of the word have been defined by Richard Lederer in his book Crazy English as: super- 'above', cali- 'beauty', fragilistic- 'delicate', expiali- 'to atone', and docious- 'capable of being educated', with the whole word roughly meaning 'Atoning for the ability to be taught through delicate beauty.' According to the film, it means 'something to say when you have nothing to say'.

All of which leaves us with the question ... who really invented the word? I am legally compelled to say that we'll probably never know the full story.

All of this is scant comfort for the original writers of course. Interestingly, 'Patricia Smith' was the rather dull pen name of 'Glorious' Gloria Parker, a composer and performer who can play (she's still around and touring) many instruments including the 'Glass Harp', an arrangement of musical glasses, which you play by rubbing a wet finger around the rims. She obviously felt aggrieved enough to write a book in 2006 called Corruption Reigns in our Courtrooms and to record an LP of the same name. The lyrics all deal with how much she hates the American court system and you can hear four of the tracks on her website here (be warned that if you go to the home page you'll get loud music played on glasses to assault you when you visit). It made me jump. Gloria appeared performing on her musical glasses in the Woody Allen film Broadway Danny Rose.

Whoever the actual author is, the one thing we can thank them for here in the UK is probably the most amazing pun headline of any tabloid newspaper ever. In a huge upset during the 2000 Scottish Premier Football league season, underdogs Inverness Caledonian Thistle beat league champions Celtic, causing The Sun newspaper to write the headline:

Inspired.
Posted by Stevyn Colgan at 01:39