Now We Are Two

Here's a nice article, reproduced word-for-word from Book Brunch about my publishers, Unbound, on the occasion of their second birthday.

Unbound: now we are two

John Mitchinson reflects on how an idea dreamed up over a few pints in a pub is starting - after two years, 30,000 registered users, 70 projects launched, and 20 books published - to look and feel like a business.

Looking backwards is always dangerous. As Thoreau said, don't do it unless you're planning to go that way. But it's impossible, sitting here in the cold, driving rain of Hay-on-Wye in May, not to do some reminiscing. It was here two years ago, in a rather fancy purpose-built shed, that we launched Unbound, then (as now) the only crowd-funding site purely for books. The weather was variable, but the excitement of finally turning an idea born around a pub table into three-dimensional reality, burned with a steady flame that kept up us warm, when the sun gave way to rain. Which it did roughly every 10 minutes. 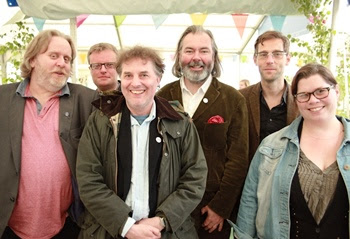 They say the first two years are the hardest for a start-up. A third of new businesses don't even last that long. And although I would be lying if I said the past two years had been entirely lacking in stress, it's also true that they have been the most exciting of my whole career. I was fortunate in my choice of partners. Dan Kieran and Justin Pollard, my co-founders, are both damn fine writers, but they have demonstrated an amazing ability to turn themselves into entrepreneurs when the conditions demanded it (which they have, pretty much every day). We have managed to run a business together and to remain friends, which may be our most important achievement. Of course, business plans and P&Ls and investor presentations and tax returns are all essential, but the core of a business is its culture. And Unbound culture is based on two simple principles: that stories and ideas have value, and that putting writers and readers in direct touch is the best way of realising that value.

So has the experiment worked? Well, we've raised almost a million pounds in pledges, built a list of 30,000 registered users (two-thirds of whom spend money regularly); we've funded 33 books, published 20, and have another 28 on the site. Only eight projects have failed out of 70 launched. The rate of launches is now running at five a month; by the end of next year we should have a backlist of 75 titles. The average pledge, amazingly, has remained steady at £32. We've had an incredibly lively programme of launch parties, meet-the-author lunches, Unbound Lives, day trips, pub crawls, quiz nights, even a séance, all of them funded directly by readers. And where there was once only three, now there are 10. We, finally, have an office in Soho. Yes, it's beginning to look and feel suspiciously like a business. That's the only explanation I can find for our unprecedented shortlisting as Independent Publisher of the Year at the recent Bookseller Awards. And though we didn't win, we celebrated as though we had.

The downsides? The same as any start-up. There isn't ever enough time. There isn't ever enough money. You have to inure yourself to crises, to keep calm and cheerful and to trust in the clarity and simplicity of the vision. The upsides? Making books still gets me out of bed (and keeps me out). This week I've written the pitch for the launch of a brilliantly ambitious one-volume history of the music industry by the legendary Simon Napier-Bell, manager of the Yardbirds, T Rex and Wham; I've watched our newest novelist, Hugh Cornwell, play a mighty acoustic gig at the Hay Festival; I've pored over the proofs of our big autumn title, Letters of Note, and helped Jonathan Meades select his extraordinary photographs for his forthcoming postcard box, Pidgin Snaps.

If this sounds rather like a "traditional" publisher at work, that's because it is. Making books is still about finding great ideas and working with authors to realise them, to sharpen and focus their trajectory into the world. But what makes working at Unbound very different is that we have contact with the other side of that equation. The constant stream of tweets and messages from readers, enthusing about books, sharing their recommendations, offering us advice, submitting ideas and - crucially - sending us money. We all feel plugged into the tastes and passions of readers, and that is both motivating and commercially invaluable. Not everything we do works, but we are able to change and adapt rapidly. It reminds me of working in a bookshop - anyone who spends a day interacting with readers soon loses their cultural pessimism.

And on that optimistic note, I'll leave it. We've had a blast. Thank you for your support. Try it yourselves: Lord knows, there's plenty of room for innovation. And as for advice, how about this: "There are two rules for success: 1) Never tell everything you know."

John Mitchinson is Publisher and Co-founder of Unbound