I'm so old ... I remember Bleep and Booster

I was sorting through my bookcase yesterday and came across this: 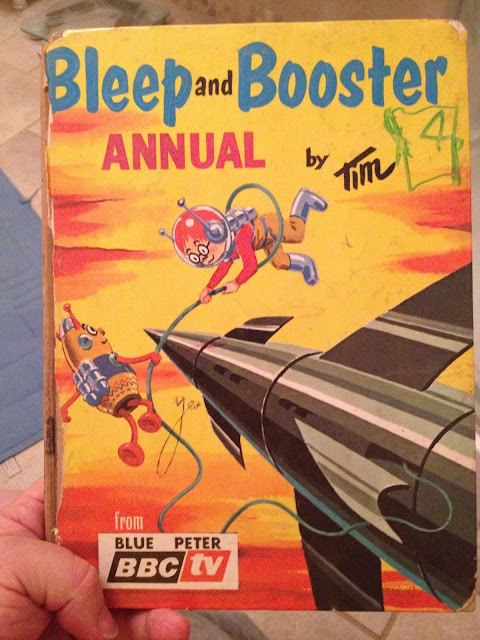 It's a Bleep and Booster annual from Christmas 1967. I can identify the year precisely, as this was a prize I won in Sunday School that year (the plate attesting to this fact is still there, along with the curious and very Cornish message 'Roland Woods is a tuss'). 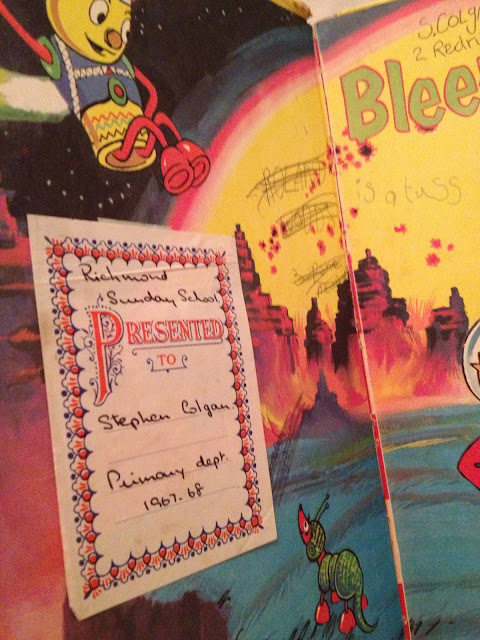 Yes, my real name is Stephen - Stevyn is a writerly affectation that helps me to maintain a pretty unique internet identity. And Stevyn is the Cornish spelling of Stephen. As for 'tuss' ... let me explain:

Now, let's get back to Bleep and Booster.

Are you old enough to remember it? Bleep and Booster was once a regular segment on the long-running BBC children's magazine programme Blue Peter. Created by writer Dorothy Smith and cartoonist William Timym (known as 'Tim') these gentle tales followed the fortunes of the eponymous alien and his human chum. Together they zipped around the galaxy in Space Freighter 9, enjoying a range of five minute long episodic adventures. These were animated for television by liberal used of pans and zooms over static images. Peter Hawkins, then best known as the voice of Captain Pugwash, narrated the stories with enthusiasm. He would later gain greater science fiction immortality as one of the voices of the Daleks throughout the 1960s. 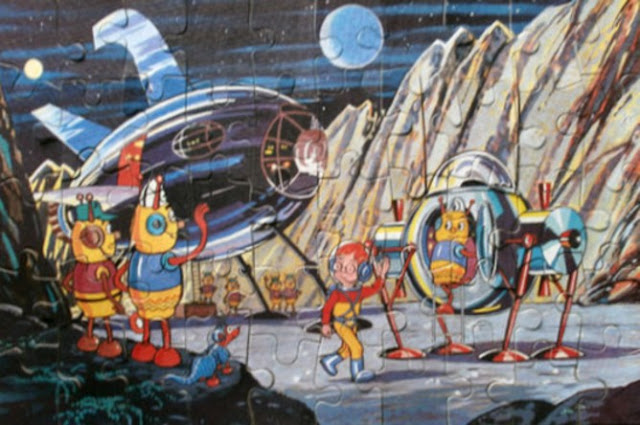 Aside from its TV incarnation, Bleep and Booster also became a regular feature of the yearly Blue Peter Books and had several annuals of their own. Bleep and Booster was discontinued in 1977, I suspect because of Star Wars. Now we had Luke Skywalker and Han Solo, who needed the adventures of a rather twee Harry Potter lookalike and his three-eyed alien chum?

William Timyn, who died in 1990 aged 87, was a fine artist by trade; his wildlife drawings are beautiful and he also sculpted. He created the bronze bust of the first Blue Peter dog - Petra - for the Blue Peter garden and sculpted the statue of Guy the Gorilla for London Zoo.

Although almost forgotten now, Bleep and Booster did generate some early merchandise; apart from the annuals and books, there were jigsaws (see above) and Pelham Puppets made a range of marionettes including the spherical Rotundans and the mischievous Trugs who only behaved if they wore their hats. 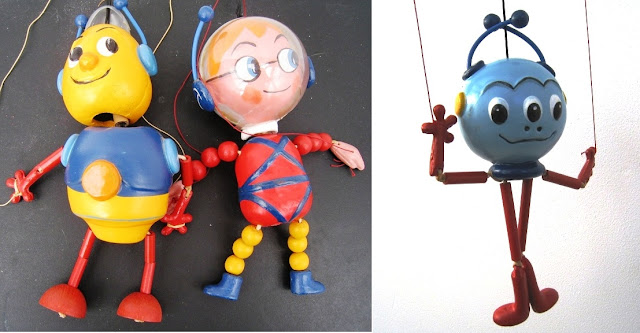 I loved Bleep and Booster as a child. Curiously, in my head, I remember it being in shown in vivid colour on TV ... but that's my faulty memory at work, influenced by the annuals. When I was watching the show, it was definitely broadcast in black and white (we didn't get out first colour TV until 1974). I'm delighted to find that some fan has posted part of an episode on Youtube:

The show had a big impact on me (and on comedian Richard Herring if this story is anything to go by) and also inspired a band to adopt the name as theirs - one member of Bleep and Booster used to be in ABC.

It was science fiction from a more innocent age and, for British kids in the 1960s and 70s, essential TV viewing.
Posted by Stevyn Colgan at 10:41