Okay ... so the Doctor is a Time Lord. And he can regenerate 12 times. And he's used 10 ... that we know of; after all, we don't know if William Hartnell was hs first incarnation or whether he had other incarnations between McGann and Eccleston.

The most recent couple of generations have looked quite similar involving a massive expulsion of energy. Previously, there have been odd distortions of space-time, swirly effects and the curious anomaly of 'The Watcher'; a wraith-like figure of the Doctor's future incarnation that hovers around waiting to inhabit the regenerating body. But however it's happened, we're told that every molecule in the body is in a state of flux; re-shaping, repairing and re-moulding the critically injured Time Lord into a new form.

So my question is ... why does Jon Pertwee's incarnation have a tattoo when no other incarnation does? He can't have visited a tattoo parlour. He didn't have time. After events in The War Games, he is punished by having a forced regeneration and sent directly to Earth. In this still from Pertwee's debut story Spearhead from Space he is in a shower at the medical faclity that he is brought to directly after arriving on our planet. 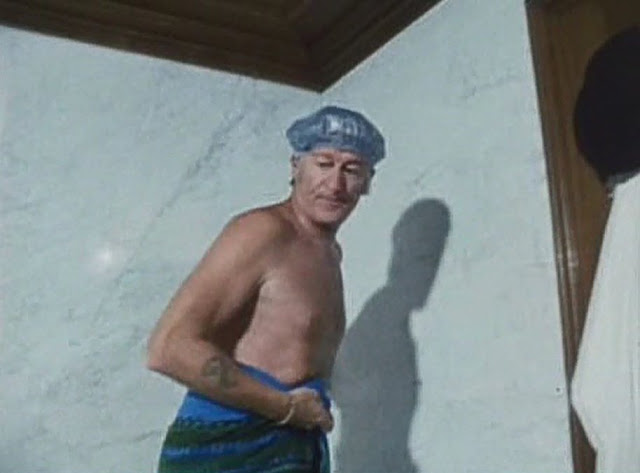 Looks a bit like a question mark doesn't it?

And then there's the tricky issue of teeth. Do Time Lords visit the dentist? Do fillings transfer between regenerations? I only ask because Peter Davison's Doctor has a good mouthful of amalgam (seen here in his pre-penultimate story Resurrection of the Daleks). Did he really get that many cavities in the short time since he first appeared at the end of Logopolis? 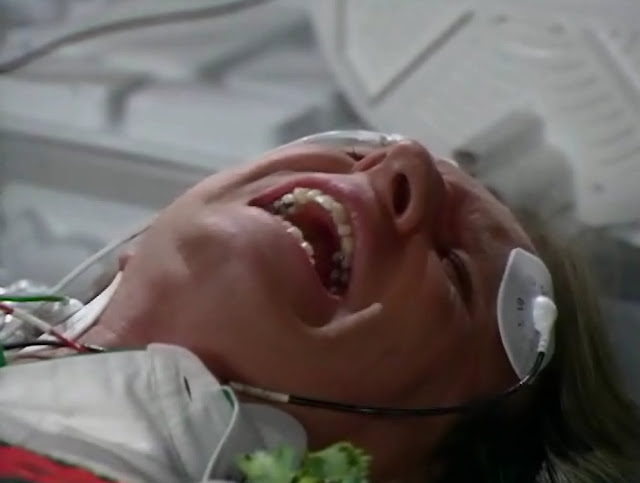 I think we should be told.
Posted by Stevyn Colgan at 15:31