Today I've found myself grappling with a question I can't answer. And, despite several hours of research I still can't answer it. It's bugging me, I can tell you. It involves stars. Let me see if I can explain this clearly.

When we look up at the day time sky we see the Sun which is round. When we look up into the night sky, we see the Moon which can look round, nearly round, or like a pointy banana. We also see stars which, for the most part, look like small dots of light. Which is how it looks in the oldest depiction of the night sky we have, the 4500 year old Nebra Sky Disk:

The ancient Egyptians depicted the stars in the sky as spider-like, with rays coming off from them ...

... and so did the Native American Indians.

It's also the way my kids and grandkids draw the Sun. 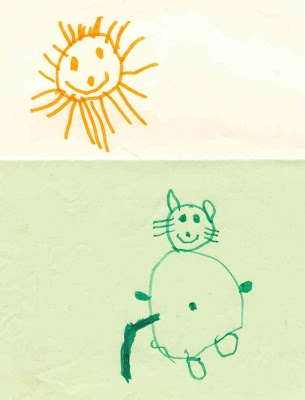 Now, I get this. Refraction caused by the atmosphere will make a star or the sun look like it has arms/legs/rays/call them what you will. But no optical effect that I'm aware of can make them look like a geometric object. So WHY do we draw stars like this?

Yes, these kinds of shapes - pentagrams and hexagrams - do appear once you start mucking about with regular polygons and, as the result, they appear in art from the year dot. I have seen them in decorations in churches and ancient palaces. I also know that they form part of the symbolism within some belief systems.