A week or so ago, I happened to catch this photo being posted on Twitter (firstly by Gareth Aveyard and then by Sam Liu and Alex Andreou). It made me laugh and I grabbed the photo to keep. 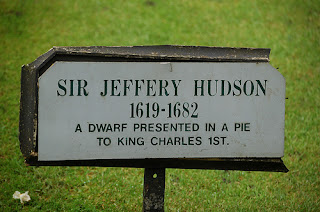 It made me go off and track down the story. And what an extraordinary story it is.

Jeffrey Hudson - the marker in the photo appears to be misspelled - was born in Rutland in on the 14th June 1619. His father was keeper of George Villiers, 1st Duke of Buckingham's, baiting bulls. Bull-baiting was a ghastly sport in which a tethered bull was attacked by dogs. The British Bulldog was bred solely for this purpose. These were bleak times but for a child born with some special 'difference' there was opportunity to escape the grim realities of being a pauper.

It was immediately apparent that Jeffrey was much smaller than his siblings and yet, he was very proportionate. As a 'rarity of nature', he was presented to the Duchess of Buckingham on his seventh birthday, and she was so taken with him that she invited him to join the household. A few months later the Duke and Duchess entertained King Charles and his young French wife, Queen Henrietta Maria in London. The climax of the lavish banquet was the presentation of Jeffrey to the Queen, served in a large pie. When the pie was placed in front of the Queen, Jeffrey arose from the crust supposedly dressed in a miniature suit of armour. The Queen was delighted and the Duke and Duchess of Buckingham offered Hudson to her as an amusing gift.

Jeffrey moved into Denmark House in London in late 1626, where the Queen maintained her royal household, with its many French attendants and Catholic priests. He was one of several natural curiosities and pets, among whom were a giant Welsh porter named William Evans, two disproportionate dwarfs, and a monkey called Pug. As he 'grew up' in years, if not in inches, Jeffrey learned to amuse and entertain with his wit and courtly behaviour as well as his appearance. Dwarfs were not rare in the courts of Europe but Jeffrey's fine proportions and tiny size made him uniquely famous. He is reported to have been no taller than 18 or 19 inches and to have grown little between sevenand 30 years of age. He was often cast in picturesque roles in the elaborate costumed masques which were staged by Inigo Jones for the amusement of the court. This is Van Dyk's portrait of him with the queen: Hudson was knighted by the king and became known throughout the land as 'Lord Minimus'. And things went swimmingly until the 1640s when the tensions that would eventually lead to the Civil War started to affect courtly life. The queen headed for Oxford and the protection of Royalist forces, where she appointed Hudson a Captain of Horse. It is not known whether he commanded troops or saw combat in one of Prince Rupert's cavalry raids, but he considered the appointment an honour rather than a joke and later in life continued to style himself Captain Jeffrey Hudson. As the conflict spread and worsened the queen fled to her native France with a small group of courtiers and household staff,  including Hudson.

At this time, Hudson appears to have become a much more serious character and let everyone know that he was no longer happy to be teased as a pet or a clown. However, a young officer called William Crofts continued to tease him and, after declaring that Hudson would 'lose a fight with a turkey cock', was challenged to a duel. Crofts thought this was a joke and turned up for the duel with a water pistol. Hudson demanded a real duel on horseback and shot Crofts through the head. Crofts' death was a disaster for Hudson. Duelling had been outlawed in France and his illegal act was seen as a transgression against French hospitality. Besides, William Crofts was the Queen's Master of Horse and head of her lifeguard. She asked permission of the French to administer justice and expelled Hudson from her court. 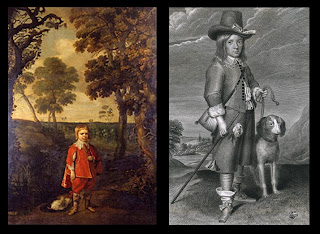 Jeffrey Hudson by Daniel Mytens and James Stow (after Mytens)
Exiled and without the protection of the royal court, Hudson mooched about for a short while before being unfortunately captured by Barbary Pirates and sold as a slave in North Africa. He was to spend the next 25 years labouring. The date and circumstances of his rescue or redemption are not known but several missions were sent from England to Algeria and Tunis in the 1660s to ransom English captives, and his first documented presence back in England was in 1669. It is said that during his captivity he had somehow doubled in height.
He returned to Oakham in his native Rutland for several years, where he was interviewed and a short record of his life made, by an antiquarian named James Wright. Then, in 1676, Hudson returned to London but had the misfortune of arriving at a time of turbulent anti-Catholic activity, which included the 'Popish Plot' of Titus Oates (also from Oakham). As he had been a well-known figure at the Catholic Queen Henrietta Maria, he was imprisoned at the Gatehouse prison. Being a 'Roman Catholick' was his only recorded offence, but he was not released until 1680. He died about two years later on an unknown date, in unknown circumstances.
Source:  Page, N. (2002) Lord Minimus: The Extraordinary Life of Britain's Smallest Man. HarperCollins, London.
Footnote: Since posting this article, a couple of people have contacted me to tell me about statues of Sir Jeffrey. Mo McFarland found out that the first is at Longleat and accompanies the misspelled sign at the top of this post. Here's the statue: 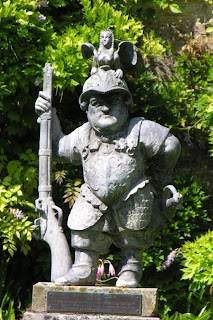 It appears to have been bought for Longleat as a garden ornament and Hudson has no connection (that I can find) to the property. However, an almost identical statue (see this site) can be found in Scotland at Fyvie Castle in Aberdeenshire. Isobel Glenelg tells me that the castle was in the hands of Sir Alexander Seton in 1596 (made Lord Fyvie in 1597/8), who was given guardianship of James VI's 2nd son, Charles. So there is a connection as James VI of Scotland, of course, became James I of England and Scotland. At the end of the 19th century a great deal of James I related art was acquired by Alexander Forbes-Leith (Lord Leith of Fyvie). The statue suffered in the Scottish weather and now stands inside on the stairs by the Dining Room. What can be verified is in Treasures of Fyvie (1985) Scottish National Portrait Gallery, and Fyvie Castle (1928) by A.M.W. Stirling (London).

What I can tell you about the statue is that it's one of quite a few made by Austin and Seeley circa 1844. It's catalogued as 'modelled in the armour of the Holy Roman Emperor, with lead mounts to musset and spurs, losses, on a later associated stone pedestal with a wooden base. The figure - 44 in. (112 cm.) high; 78½ in. (199 cm.) high overall.' Felix Austin went into business making artificial stone in New Road, London in 1828, describing himself variously as an architect, statuary mason and sculptor as well as artificial stone maker. His material was not the same as the ceramic body used by Mrs. Coade, (although he is known to have copied old Coade designs), but made from Portland cement, broken stone, pounded marble and coarse sand (The Builder, 1868). However, like Mrs. Coade he encouraged leading architects and designers to work for him. Around 1840 he entered into partnership with John Seeley; Seeley had trained at the Royal Academy Schools and also made an artificial stone, which he called 'artificial limestone', before entering into partnership with Austin. In 1841 they published their first catalogue, Collection of Ornaments at Austin & Seeley's Artificial Stone Works for Gardens, Parks and Pleasure Grounds etc. The firm continued in production until about 1872. A drawing of Sir Jeffrey appears on page 10 of Austin & Seeley's 1844 catalogue. (Source: Christie's Auction house.)

My thanks to both of you!

Photo of the statue by Cyberslayer.
Posted by Stevyn Colgan at 10:33