You'd be better off with a sinister hairdryer

I've blogged before (see here) about dominant handedness and some of the myths that surround left-handedness (more creative, sinister etc.). I've also argued that we should spend more time looking for the similarities between people rather than differences. Whichever hand is dominant really should not be an issue in the 21st century. However, I still find that manufacturers often don't take left-handedness into consideration when designing a new product. I'm a Righty but one of my daughters is a Lefty and she has endless problems with everyday products because people haven't been courteous enough to think about her needs (and the 7-10% of the population who share them). It's a Righty dominated world. Yes, some companies do produce left-handed versions of things - Virgin even make a left-handed mobile phone - but these products are invariably more expensive than the right-handed versions. With all of the brilliance and inventiveness we have as a species isn't it possible to design products that can be used equally well by both?

I mention this today because of a tweet I read earlier. Artist Joe Rogers - known by his Twitter name of @colourboxonline - made the comment: 'Is there a rule that says in pictures hair dryers have to be pointing to the left?' and he linked it to a Google image search. Here's the link. But if you can't click on that right now, here's what comes up: 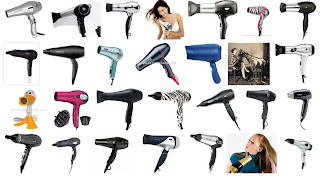 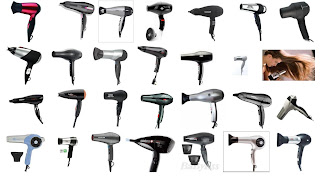 Pages and pages of hairdryers and nearly all of them pointing left. And you know why don't you? I assume most of you reading this are right-handed. If you had to lay a hairdryer down in order to photograph it, you would lay it down facing left. A left-handed person would lay it down facing right. I would therefore suggest, Mr or Mrs Hairdryer salesperson that you present your photographs with the hairdryers facing right. You'll stand out from the crowd on the Google image search. There you - free marketing advice.

After all, it's often the product that breaks all the rules that captures the most readers. Nothing else would explain why the Daily Mail website is now the most visited newspaper site on the planet (It's true! See the BBC news item here). Their site breaks every rule of website design ... but maybe that's the point. It''s the peacock that gets noticed, not the hundreds of starlings around it.
Posted by Stevyn Colgan at 16:14