Yesterday I travelled to oh-so-trendy Shoreditch in East London to be one of the speakers at Birdie, a photography conference for the passionate snapper. This was an event aimed at both professional and amateur and the speakers covered a wide range of subjects and approaches. It was a really great day; very relaxed, very informative, very casual.

After an intro from the chair of the conference, Dan Rubin, we had our first talk of the day from the amazing Kevin Meredith - known to many as Lomokev due to his love of lomography (look it up if you don't know what that is) - who spoke to us about making the move from amateur to professional photographer. 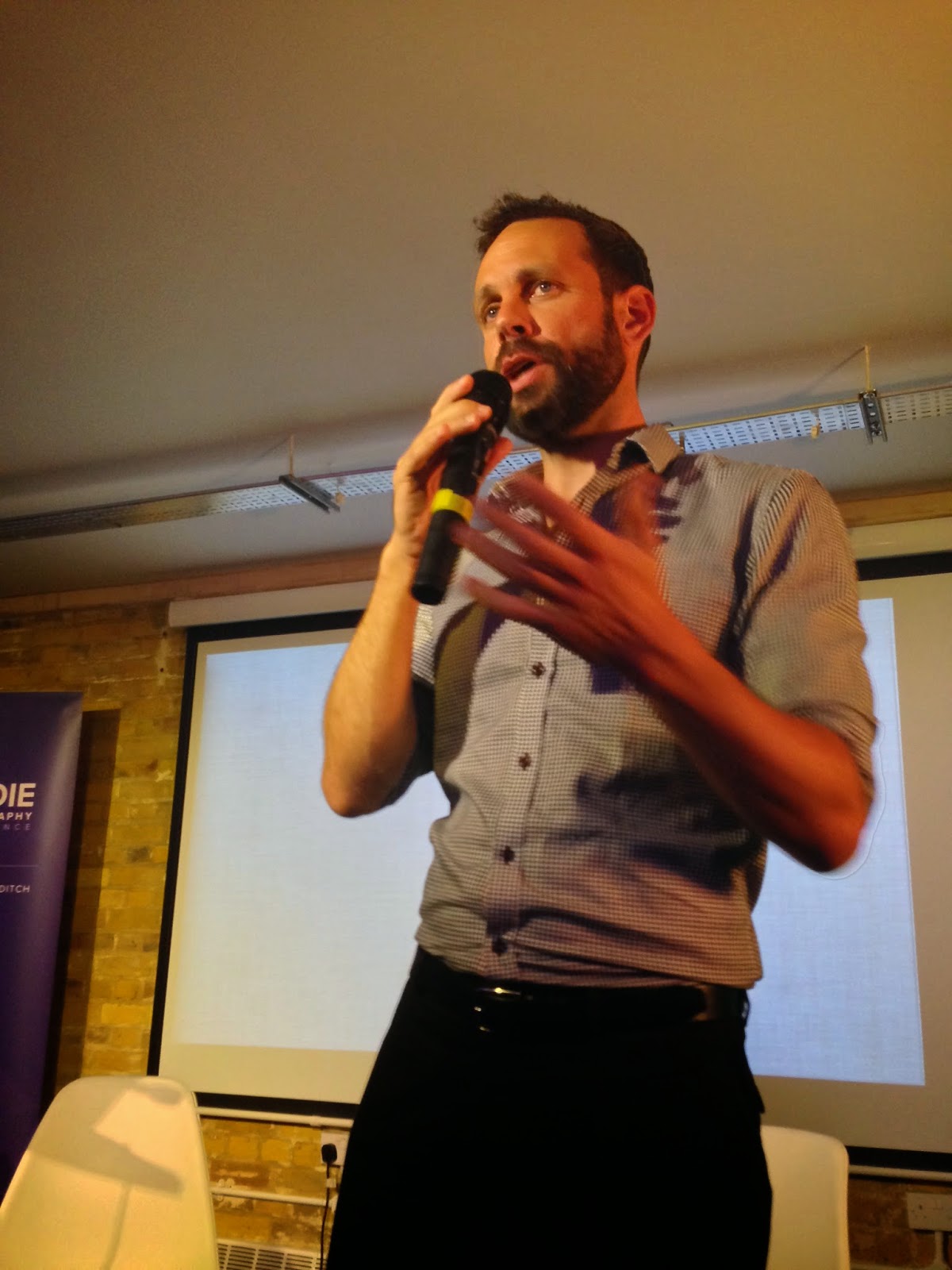 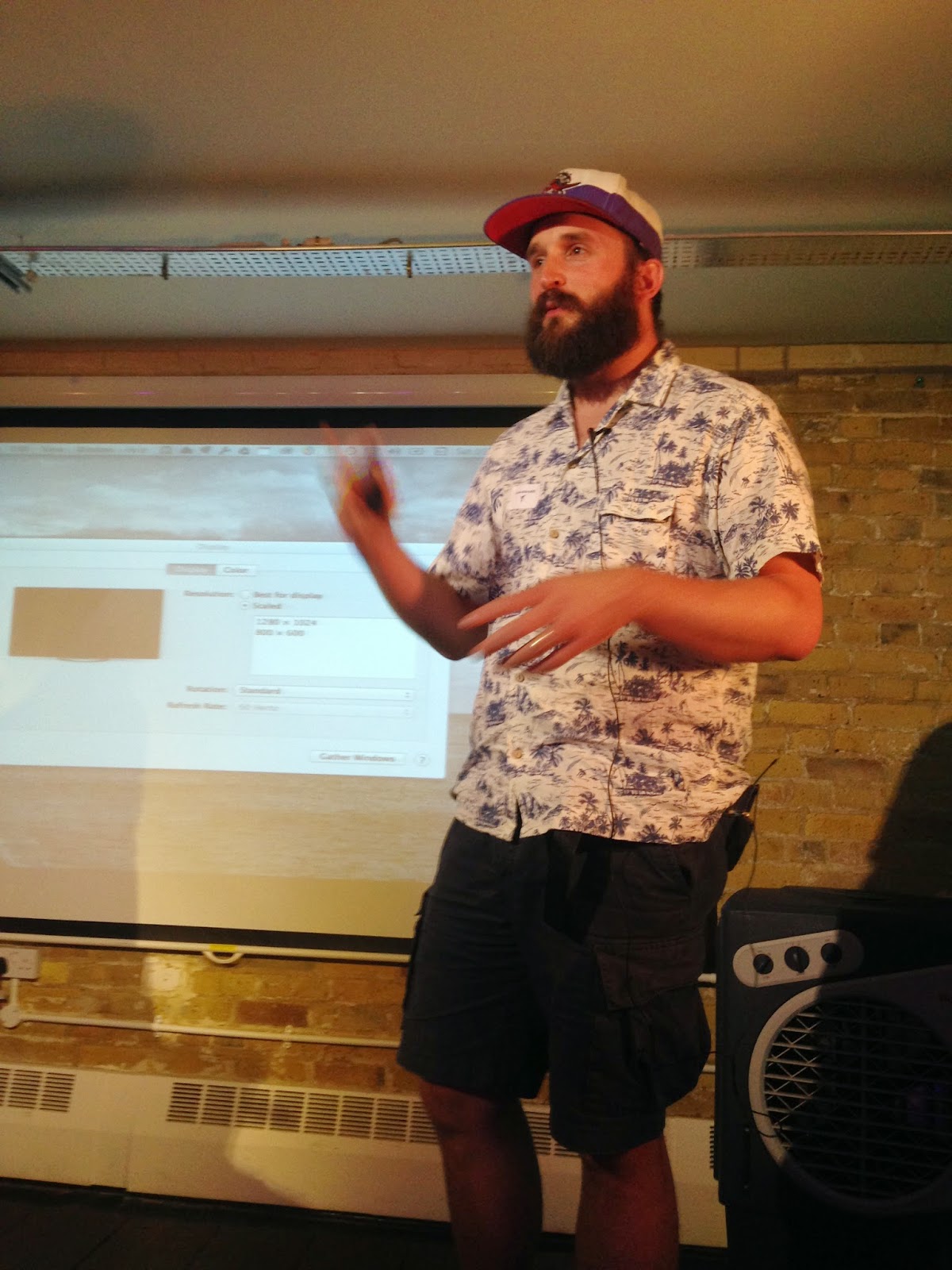 I should stress, as Kev did, that the term 'amateur' wasn't being used as a measure of quality but as simply meaning 'not being paid for it'. His own story was fascinating, stressing the importance of doing projects because they are the things that get noticed and land you the work.

Next up was Dan Rubin being interviewed by Tom Seymour, editor of FLTR magazine. The guys talked about the future development of camera-related tech including smartphones, wearable devices such as the new Apple watch and Google glass. Both men were early adopters of new tech in the past and spoke about how tech that was once viewed with suspicion or at least a jaded eye is now ubiquitous. We were left with the impression that things are going to get very exciting. 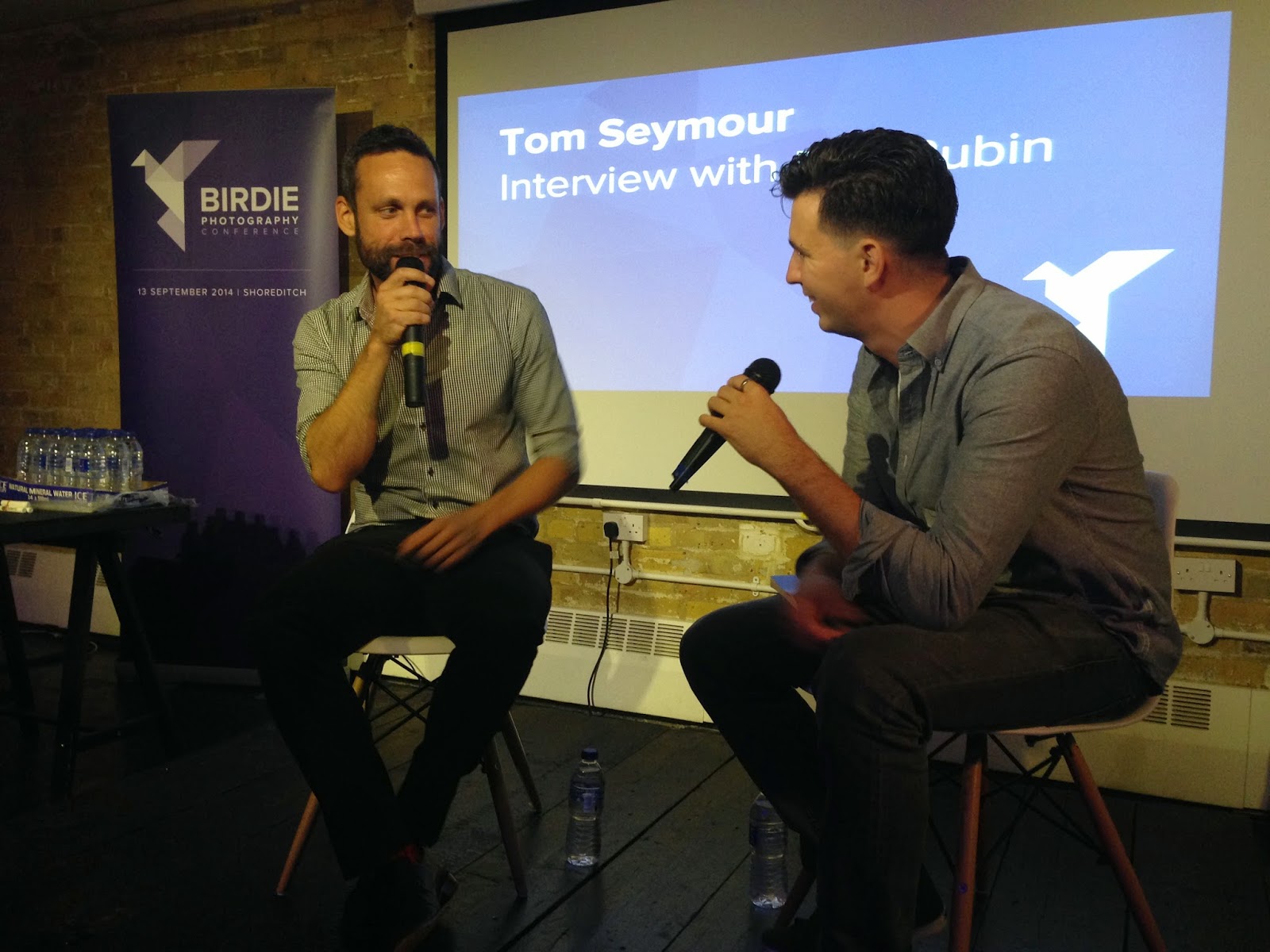 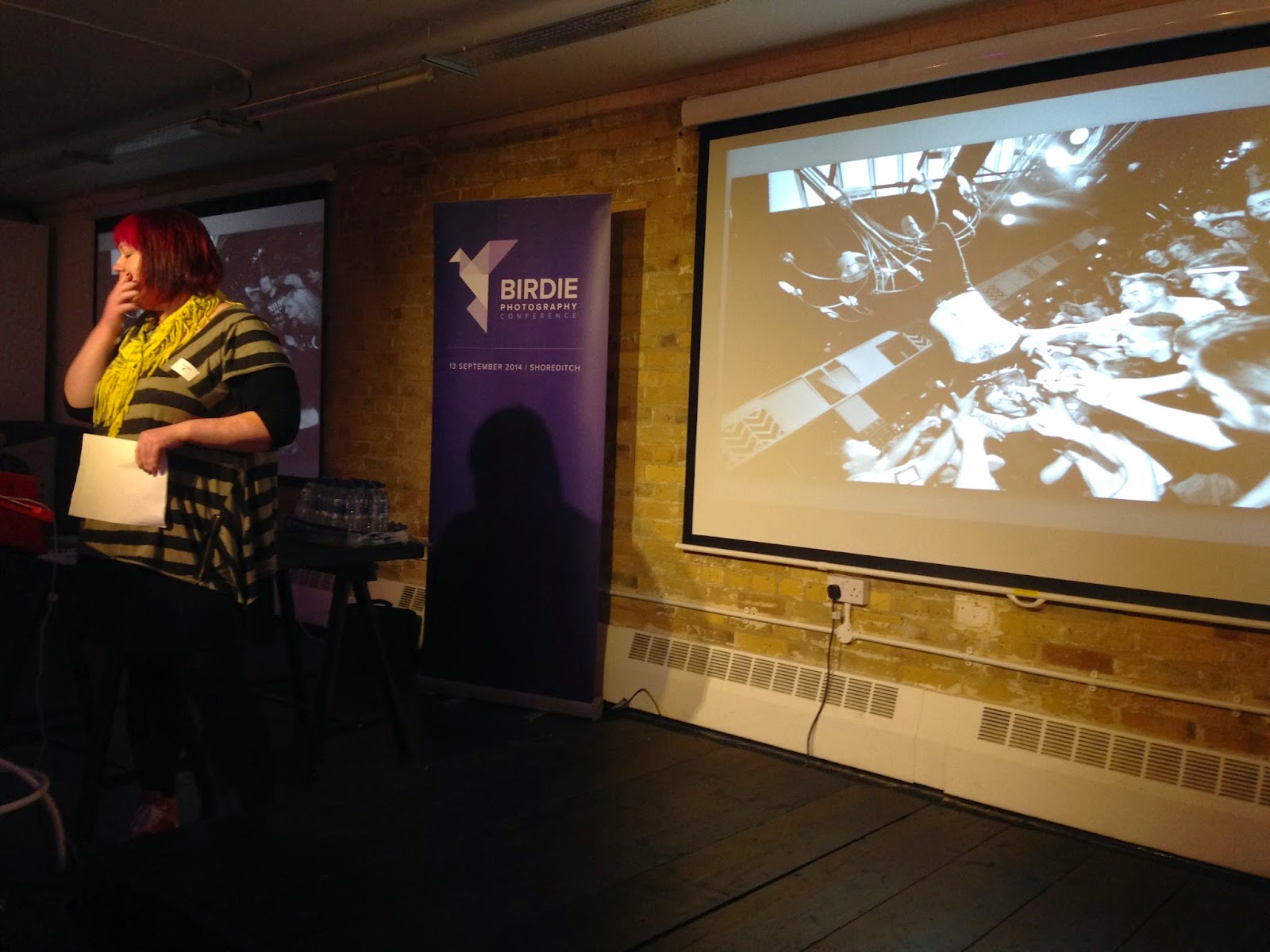 Then came an often hilarious talk by music photographer Katja Ogrin who shared her journey with us from snapping acts at jazz festivals in her native Slovenia to her move to England and to now being a professional music photographer. We saw some amazing action shots of band like The Hives, Linkin Park and Katy Perry and this band (see above), whose name eludes me, but whose lead singer had a thing for swinging upside down off the chandeliers.

Copyright is an issue that affects all creative people and helping us to tiptoe through the minefield was Naomi Korn, our next speaker (after a nice break for tea, coffee and chat). Naomi somehow managed to make the subject both understandable and even fun. A marvellous speaker and very knowledgeable. I know have a pretty good bead on what I can and cannot do by law. And, indeed, what people can or cannot do with my stuff. She was followed by the very affable Conor Macneill who travels the world finding the darkest places in which to take his extraordinary photos of the night sky. To see what's up there and to know that, thanks to light pollution, the majority of us are robbed of such glorious beauty made me want to seek out the nearest desert and set up camp. 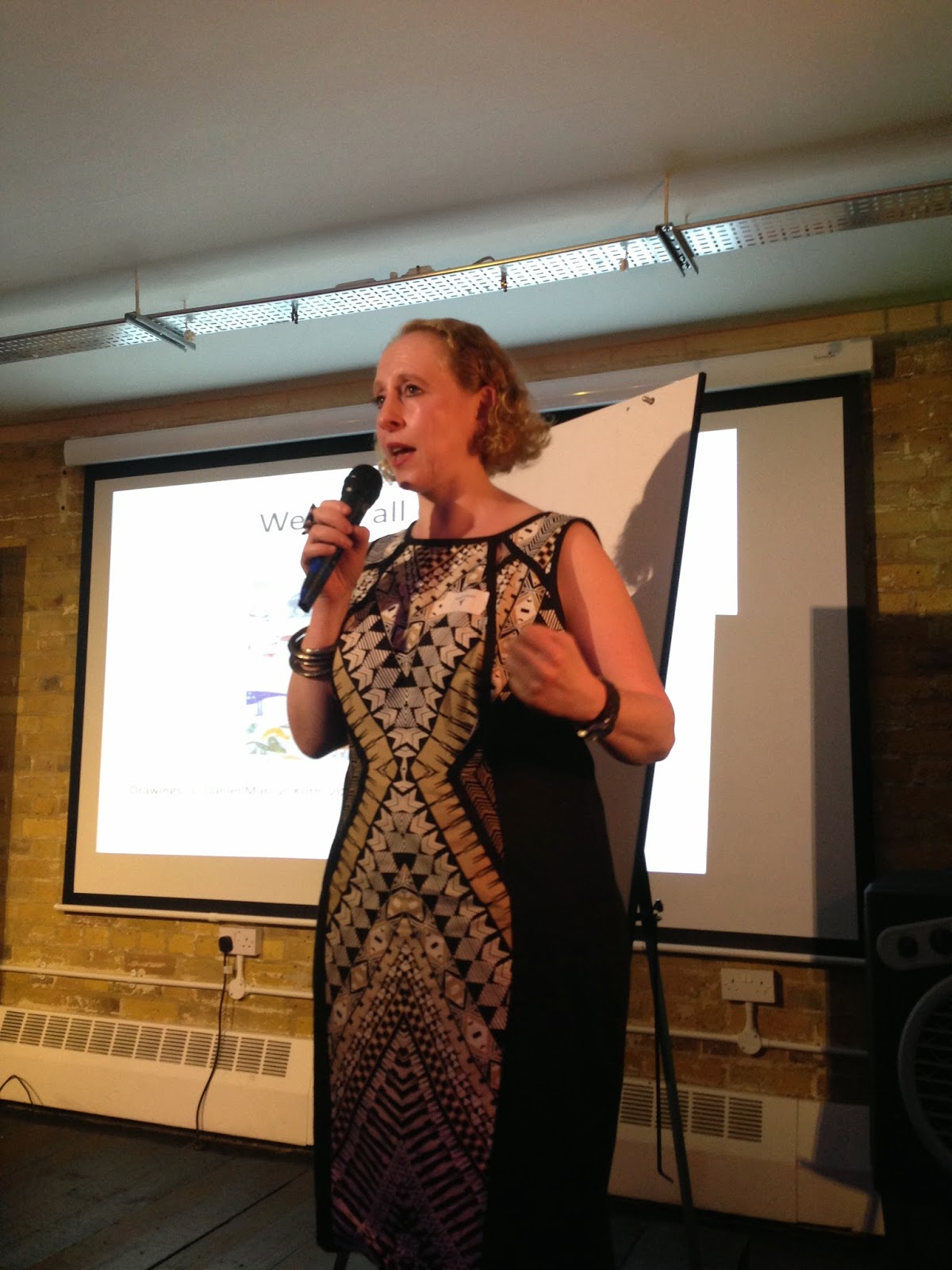 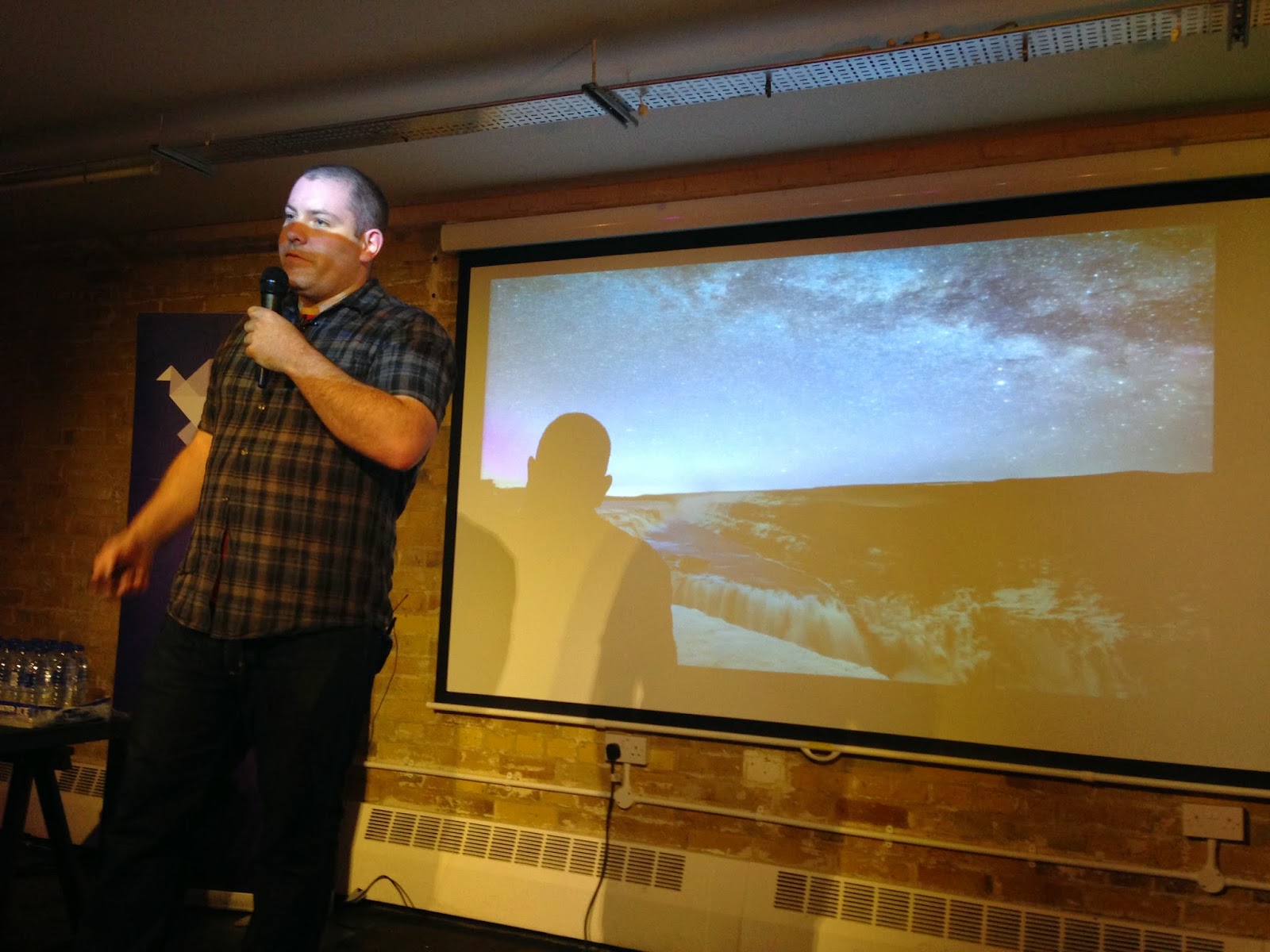 During the lunch break, I had a look around some of the sponsor's stalls and saw some amazing gear. I was particularly impressed by the Instant Lab made by Impossible. This great bit of affordable kit allows you to turn your phone photos into physical Polaroid shots. It's brilliant! I also loved Trigger Trap's 'dongle' that allows you to remotely trigger your DSLR using your phone's button or microphone. We all had great fun in the 'Screaming Booth' where our yells activated the camera. Here's Kev and friend and me and Dan being loud. 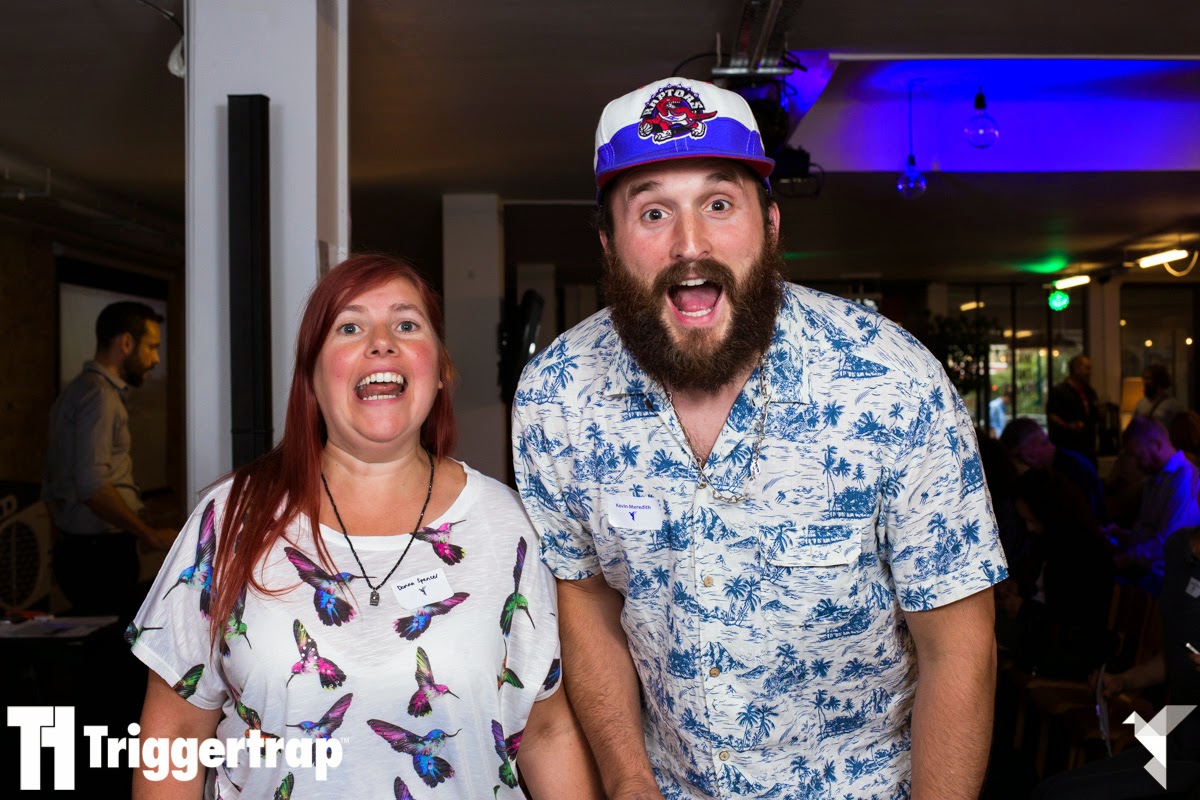 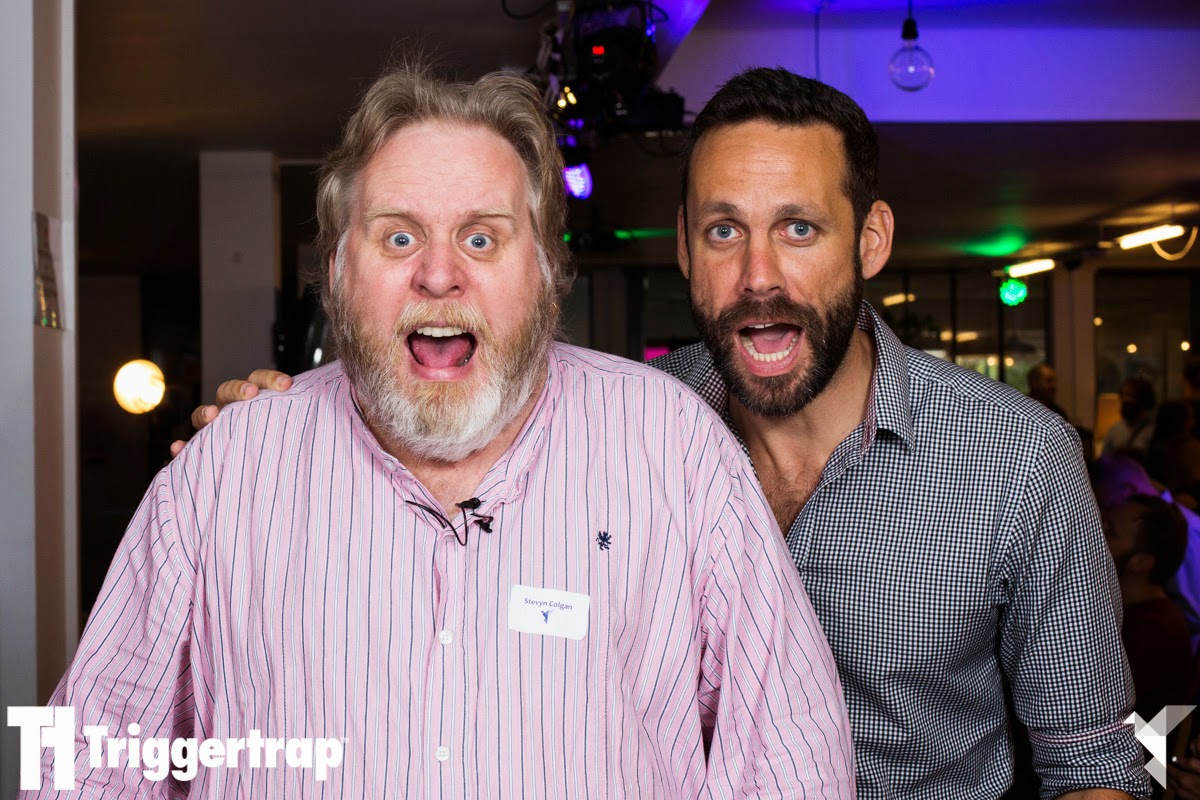 I also got to chat to Tom Elkins, CEO of  charity called Photovoice that used photography projects to empower mrginalised individuals and communities. it's remarkable work. I've written about it in more detail on my problem-solving blog that supports my new book Why Did The Policeman Cross The Road? Do have a read here.

After lunch, first speaker up was yours truly giving the delegates a post-prandial alternative and Quite Interesting history of photography that took in laughing Victorians, invisible mums, even more invisible Loch Ness monsters, Lunar calendars, selfie-taking classical statues and Kermit the frog's bottom. 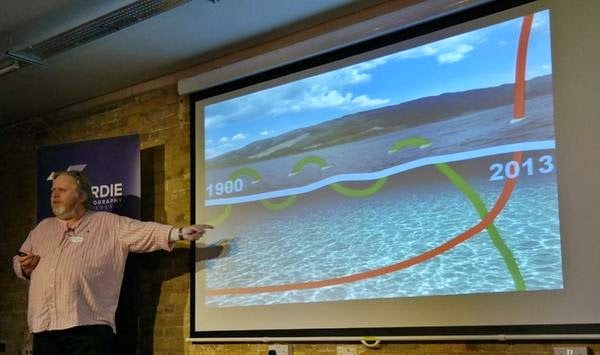 The penultimate speaker of the day was the lovely Agatha A Nitecka, a stills photographer who works almost exclusively on the sets of films when they are in production. Her film-based photos are deliciously atmospheric and many have ended up as the poster art for the films she's worked on, most recently Wuthering Heights and the forthcoming Mr Holmes, Sir Ian McKellen's much-awaited story of Sherlock in his later years. Never less than passionate and truthful, Agatha's talk was spellbinding. 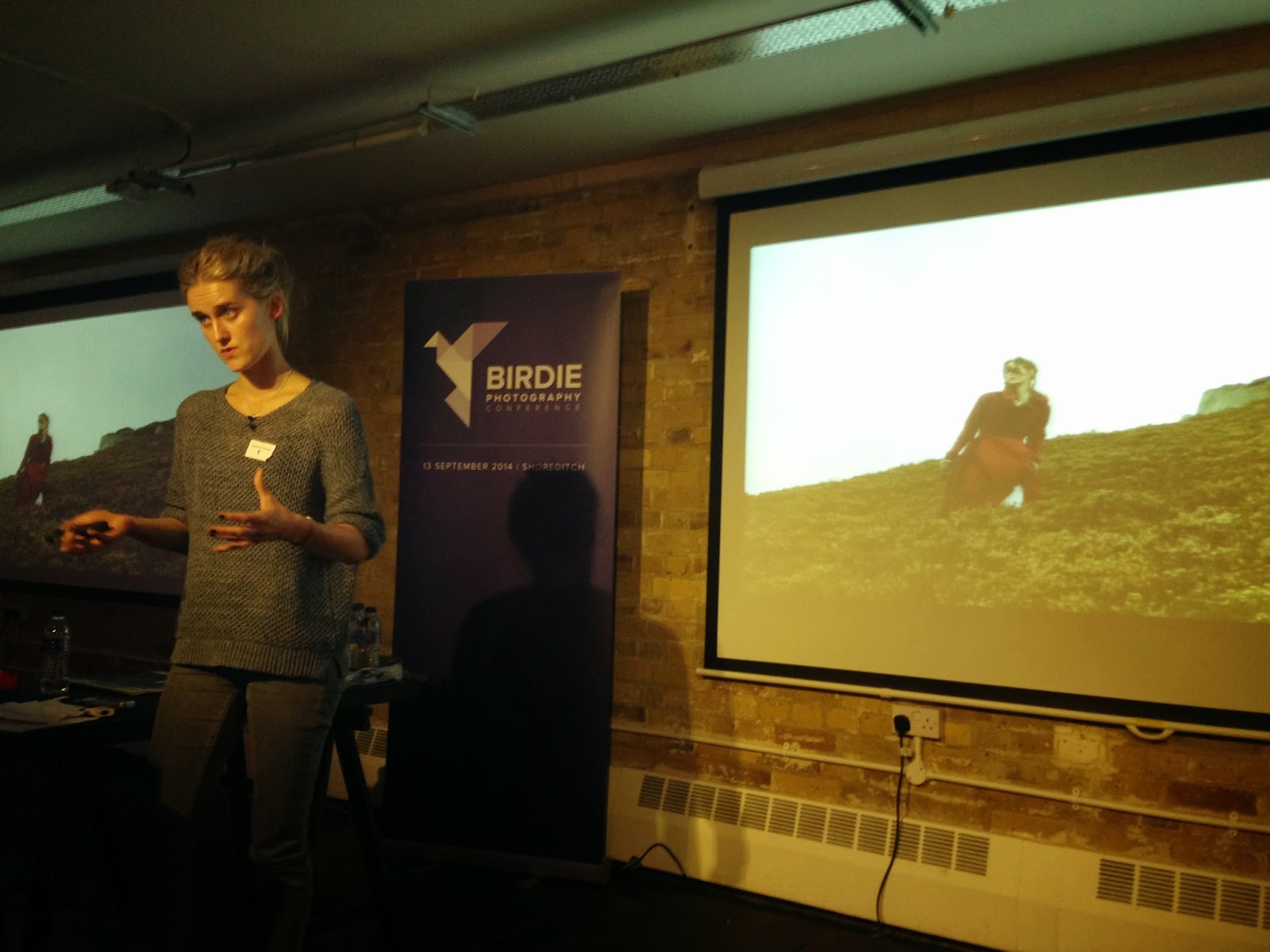 Last but not least, came an old mucker of mine, Chris Wild - best known as The Retronaut - whose hugely popular eponymous website (and now book) shows us that as much as things change, most things stay the same. As Chris says, 'Retronaut is a photographic time machine. It is a digital collection of tens of thousands of pictures from across the past, all with one thing in common - each one has the power to warp your sense of time.' In his brilliant presentation we saw people from the early 20th century who looked like people we'd meet in the street today - all that had changed was the fashions. In the past people laughed, shopped, wept, danced, fell in love and died just as we do. And, of course, for them it wasn't the past; they lived in the present just as we do. It was an extraordinary talk by a man with an extraordinary view of history. And an extraordinary dress sense too as he turned up in what appeared to be clothes from the Wild West. Consider my sense of time warped Chris! 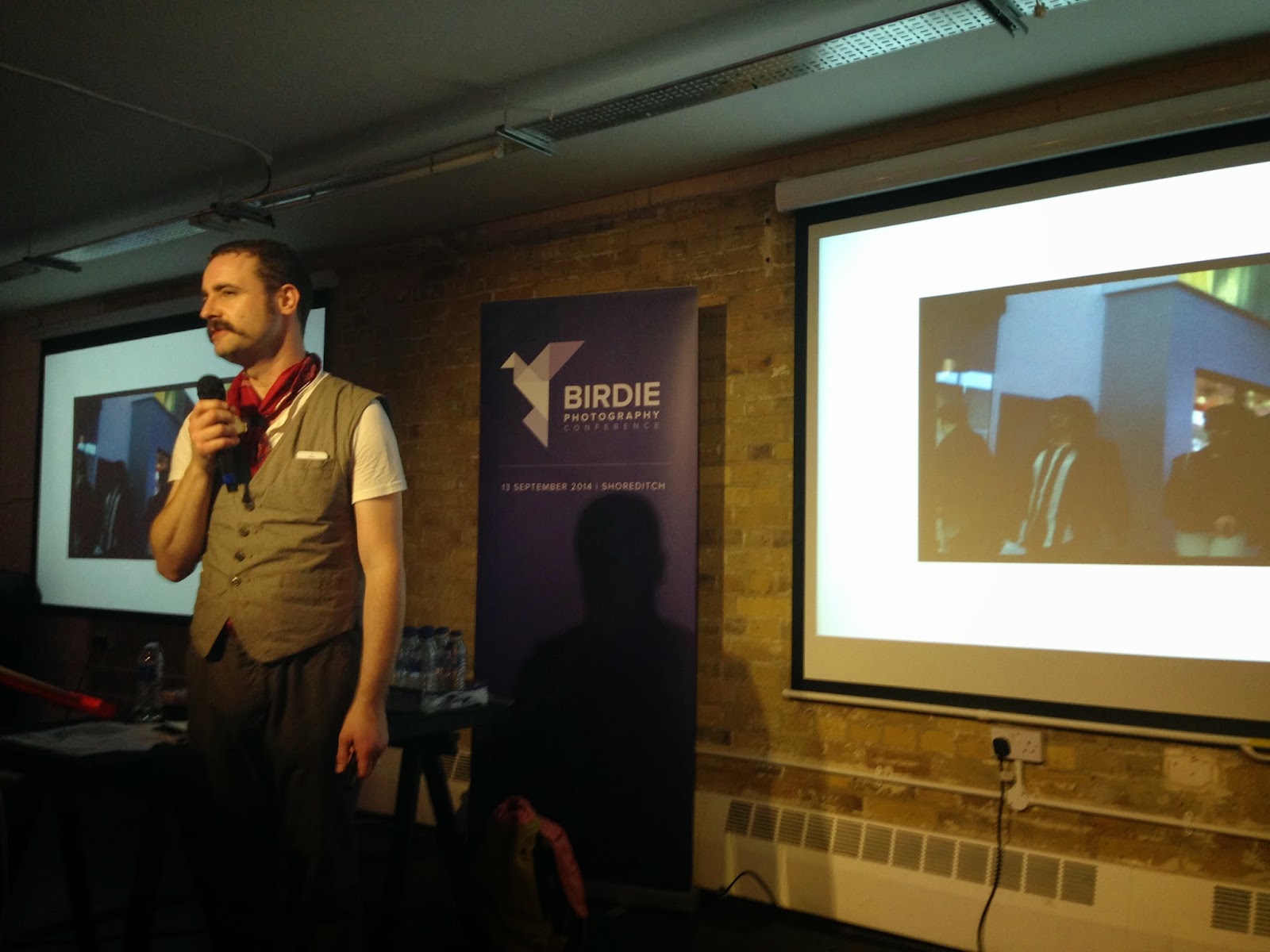 As I said above, it was a wonderful day and I really hope that they do it all again in 2015. Massive thanks must go to Ruth Yarnit and all at White October Events.

Oh, but before I go, I must just throw in a few camera phone shots of my own. Shoreditch and Hoxton are so photogenic these days due to the proliferation of great street art. You can't turn your head without seeing a piece worthy of capturing. 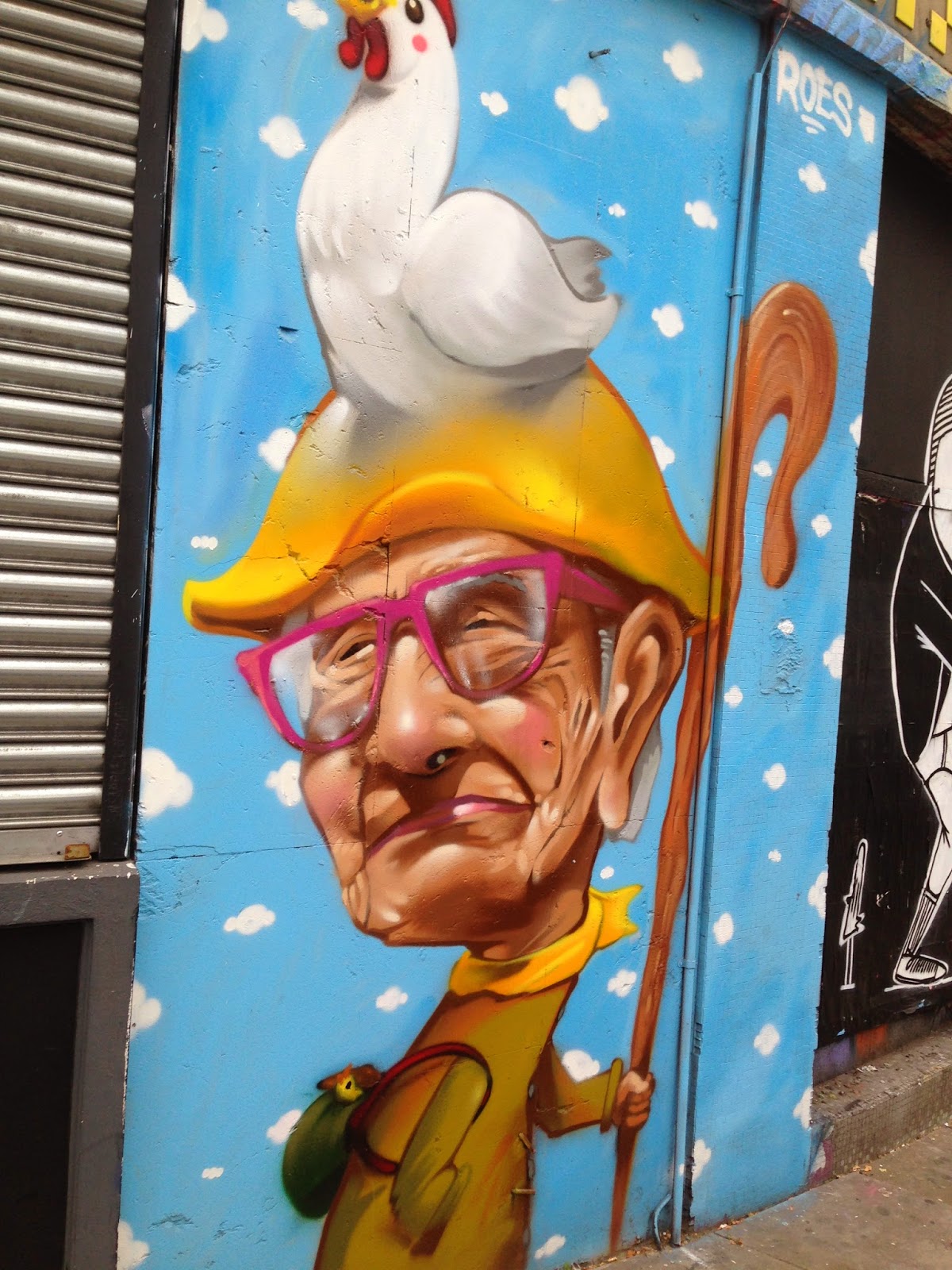 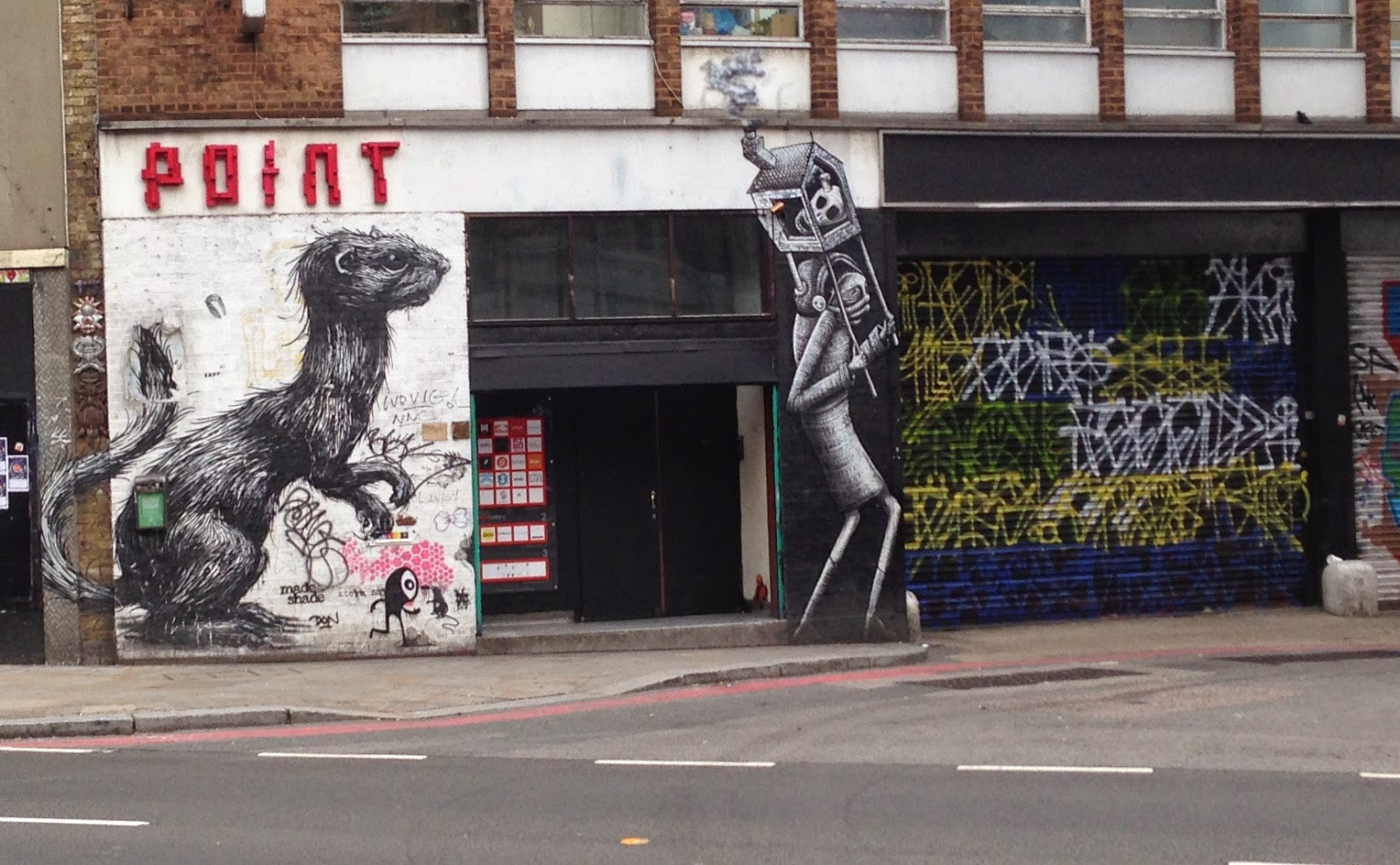 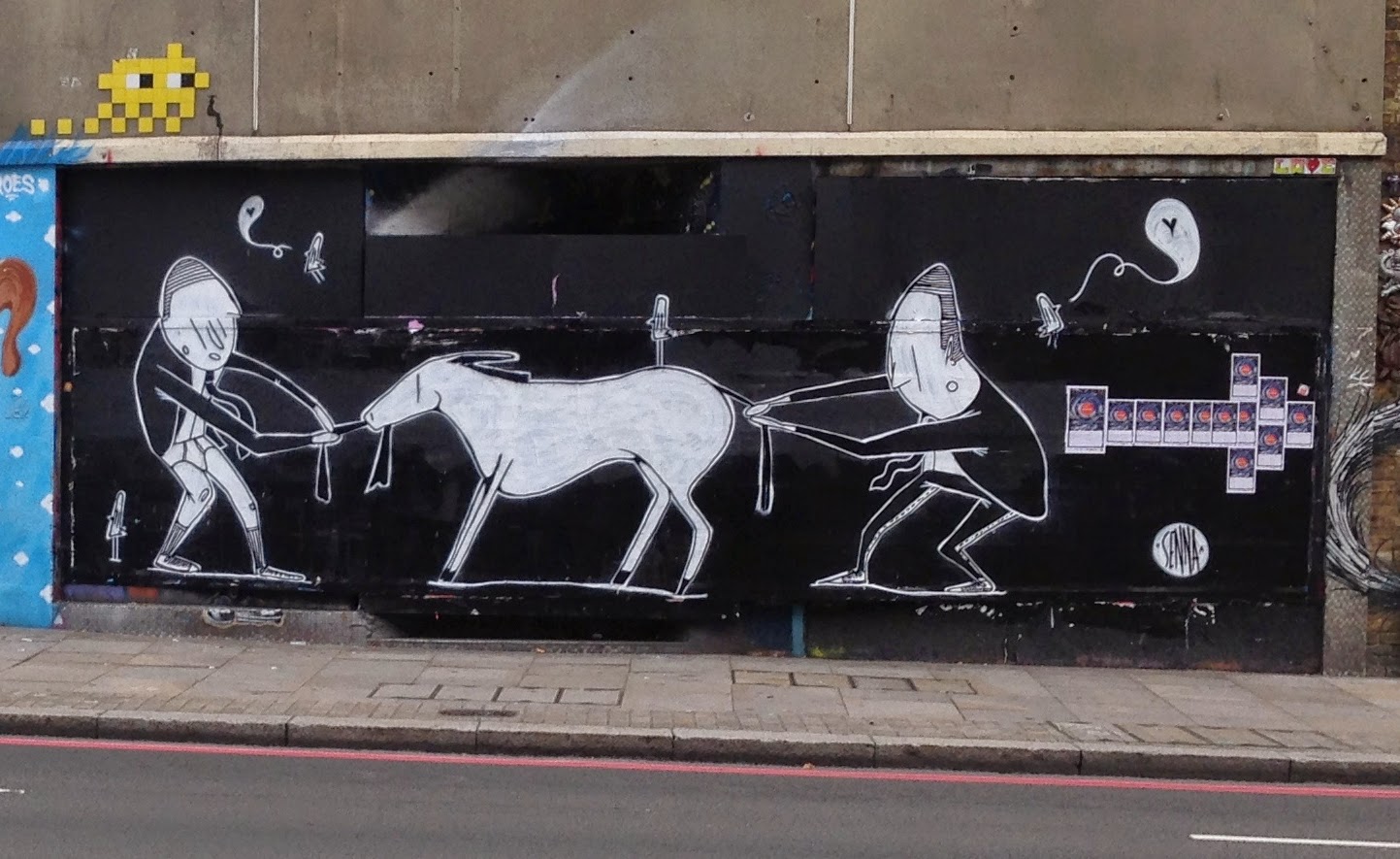 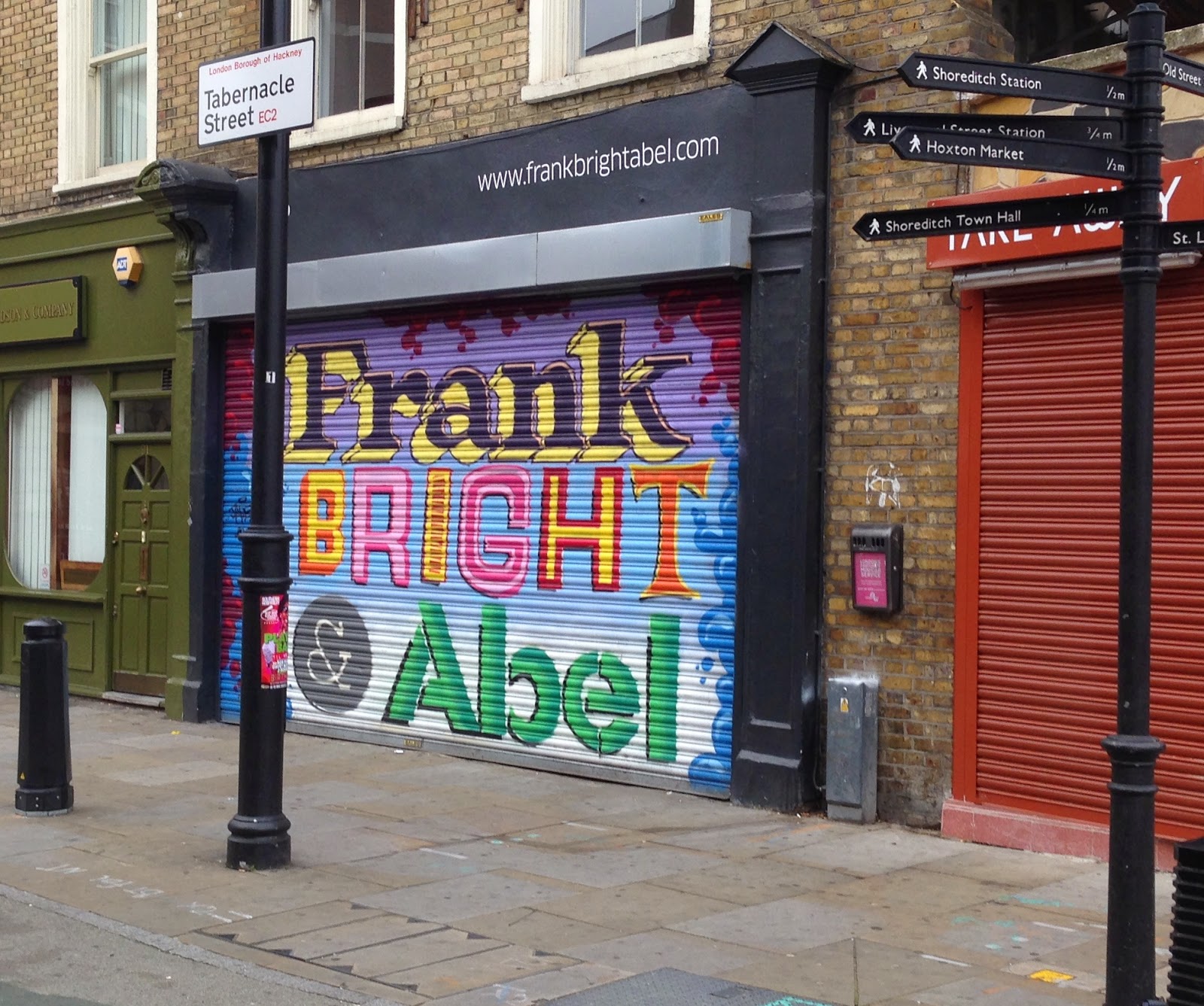 And the arty hipster aesthetic also extended to the Hoxton Hotel where I stayed overnight. The place was full of shabby-chic furniture, handmade soft-furnishings and retro bric-a-brac. And the room sported a fecking huge mirror. In other circumstance, I sure such a thing would have been damned good fun. In this instance, all it meant was not being able to avoid the sight of my own beer gut. 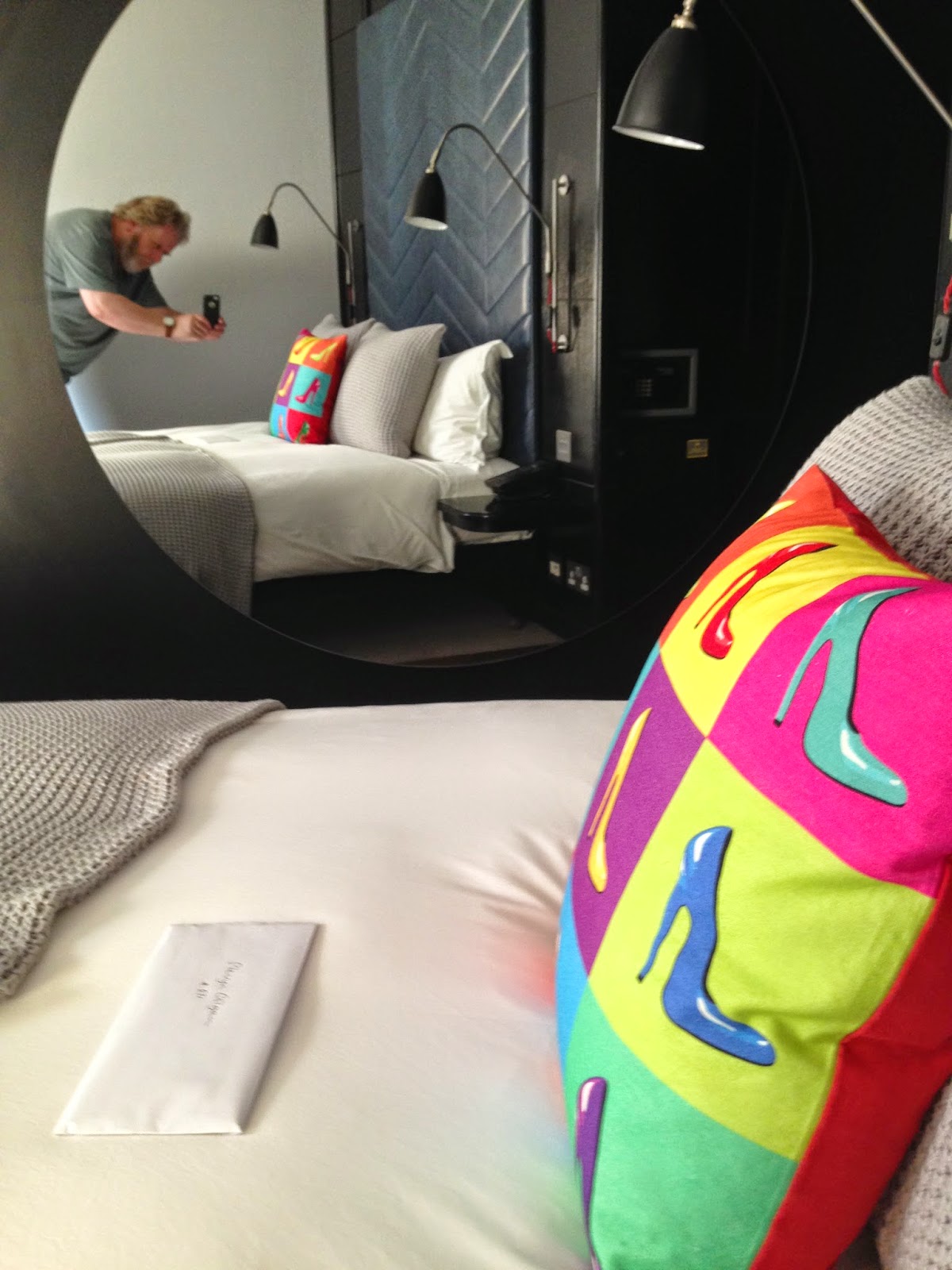 But still, a very nice hotel and one I'd stay in again.

P.S. The envelope was from the Birdie organisers with details for the following day ... it wasn't a payment!
Posted by Stevyn Colgan at 14:52