My profound apologies for the lack of bloggage this past week. I've been exceptionally busy writing lots and lots of content for the QI website, which is being hugely improved and updated soon. And I've been researching for the next few episodes of The Museum of Curiosity which starts recording in a fortnight. It'll go out on BBC Radio 4 in October.

I've also been doing some promotional work for my new book and, during the course of writing a piece about the Olympics, I found myself chin-scratching over several 'facts' that appear time and time again on the internet; facts that are, frankly, wrong. For instance, I found a number of sites that claimed:

If the Olympics were held on the Moon, high jumpers could jump over a bar 48 feet high!

Well, actually, no. No they couldn't.

The figure of 48 feet is based on the premise that if the High Jump record is currently 2.45m (8ft) and the Moon is 1/6th Earth gravity, then we should be able to jump six times higher. That means a height of around 14.7m (48ft). But actually, it’s not quite as simple as that.

If a 6ft tall person jumps over a 8ft bar, they’re not actually jumping 8ft. They’re only jumping around 5ft. Much of a High Jumper's clearance is achieved by body position. In any jump, twist or somersault you do, your body rotates around your centre of gravity, which is around where your navel is; about halfway up your body. In the case of our 6ft jumper, that’s around 3ft. And because their navel is already 3ft from the ground, they need only jump 5ft to get their centre of gravity over the 8ft bar. 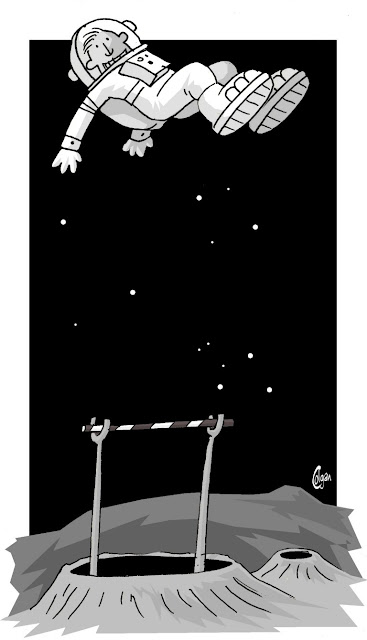 The men’s world record for the High Jump was set in 1993 by Javier Sotomayor, who is 6ft 5ins tall. So the highest that he jumped was actually somewhere around 5ft. On the Moon, therefore, he'd jump around 30ft.

The women’s record is 2.09m (6ft 10ins), set by Stefka Kostadinova in 1987. She is 5ft 11ins tall. Therefore, she can jump around 3ft 9ins, which would give her a Moon jump of somewhere between 22 and 23 ft. The best most of us can manage is 2ft to 3ft. Therefore, we would jump significantly less - around 12 to 18ft - depending on our strength to weight ratio, height and fitness.

Then, of course, we’re not taking into account the weight of our spacesuits. The NASA A7L EVA suit worn by the Apollo astronauts consisted of 21 layers of different materials plus oxygen supply and water circulation system. It weighed a staggering 91kg (200lbs) or just over 14st. Of course, on the Moon, that would be around 15kg (33lbs) or 2st 3lbs. Things wouldn’t be much improved by building a dome on the Moon to play the Olympics inside. While gravity would remain at 1/6th, air pressure from the artificial atmosphere would offer slight resistance. Plus, the climate control would need to cope with the fact that temperatures on the Moon fluctuate between 120ºC (248ºF) by day to -150ºC (-238ºF) at night.

Yes, I know. I'm a killjoy and a spoilsport. Sorry. But I do like things to be accurate and - despite the crippling handicap of my CSE Grade 5 Maths qualification - I think these figures are right. If they aren't please let me know.

You wait until tomorrow when I pull an oft-told story about fleas to pieces ...

Footnote: A day or two after I wrote this post, I came across this excellent little guest blog on the Scientific American website by astrobiologist Dr David Warmflash (great name!). It's all about gymnastics on the Moon and worth a read.
Posted by Stevyn Colgan at 00:56