Here's another of those old chestnuts that still turns up on websites of fascinating ‘facts’.

If a flea were scaled up to the size of a man, it could jump over a skyscraper.

Oh really? Let's look at that one.

The largest species of flea, Hystrichopsylla schefferi (the mountain beaver flea), can grow to 10mm (around 3/8ths of an inch) for females and 6-7mm for the male (around quarter of an inch) but this is exceptional. Most species get no larger than 3.3mm (1/8th of an inch) in length and many are much smaller.

The average flea can jump approximately 197mm (7¾ins) vertically and a distance of 330mm (13ins) horizontally. Many sites claim that the flea can jump vertically ‘150 times its own body length’. That would, therefore, indicate a flea of 1.3mm in length. Mathematically, therefore, a flea that is scaled up to be 1.82m (6ft) tall could also jump vertically 150 times its length, which is around 274.3m or 900ft. Impressive eh? Possibly … but it is only going to get ‘superflea’ over the shorter skyscrapers. It wouldn’t clear the Empire State Building (381m or 1,250ft), or the Eiffel Tower (320m or 1,050 ft) or even the London Shard (309m or 1,020ft). There are 137 skyscrapers worldwide that are over 274.3m or 900ft tall and hundreds of other man-made structures like TV masts and broadcasting towers that are way over 304.8m or 1000ft high ... so the myth is already crumbling.

But this is all academic anyway as the laws of physics would prevent any such thing from occurring. It’s all a matter of scaling. 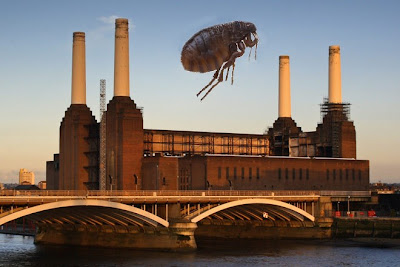 Imagine that you run a dice factory. Each die measures 10mm by 10mm by 10mm and each one weighs 1g. The dice are packed in boxes 100mm by 100mm by 100mm. Therefore, you can fit 1000 dice in each box by having 10 layers, each made up of 100 dice arranged in 10 rows of 10. But look what’s happened as we’ve scaled up: The box is only 10 times taller, 10 times wider and 10 times deeper than a single die. However, the box now weighs 1000 times more than a single die. As things get bigger, their weight increases to match their volume, not their size. So if we scaled up a flea by a factor of just 10 we’ve now got a flea that’s 10 times longer, fatter and taller but which weighs 1000 times more than it did. And a 1.3mm flea scaled up by a factor of 100 would still be only 130mm in length but would weigh a million times more than a normal flea.

Its muscles, meanwhile, have only got 100 times bigger in length, breadth and height. Suffice to say, people who are much more clever at maths than I am have worked out that a six feet tall flea would weigh enough to ensure that it couldn’t jump any higher than you or me.

Incidentally, scaling works the other way too. If you dropped a flea from the roof of a building 100 feet high, it would probably survive the fall. However, if you jumped from the same building, you’d be chutney. Here’s why: If you divide an animal's length, breadth, and height by a factor of 10; its weight is reduced to a thousandth of its original weight, but its surface area i.e. the side that’s facing downwards, only by a hundredth. So the smaller it gets, the higher its surface area becomes in relation to its weight. After a while, air resistance begins to be a more powerful factor than the pull of gravity.

The only fact we can say is true is that, if fleas built their own flea-sized skyscrapers, they could probably jump over them.
Posted by Stevyn Colgan at 02:33