This Thursday's guest blogger is Joel Meadows, creator and editor of TRIPWIRE magazine which, for 20 years, has been at the forefront of the indie comics, TV and film review market. The magazine has gathered a number of awards and has some heavyweight fans including Ian Rankin, Michael Moorcock and Christopher Fowler. He's also found his way inside such places as Henson's Creature Workshop and Industrial Light and Magic. To mark the 20th anniversary of the magazine, Joel is publishing TRIPWIRE 20; a lavishly illustrated celebration with classic features, all-new content and new artwork by Mike Mignola, Frank Quitely, Howard Chaykin and many others. Do have a look at his pitch and pledge if you want to see the book become a reality. I know I do.

When we started, we really didn’t have a clue.

I was nineteen years old, at sixth form college, and I had been chatting with an ex-neighbour of mine. In 1991, we had put out one issue of a magazine we called The Review, which we had printed at a very dodgy printers down in Tottenham. My neighbour was bemoaning the lack of decent magazines that covered comics and music. And so in February 1992, TRIPWIRE was born. Looking back at twenty years of producing the magazine (with only a short break while I went off to freelance), the younger me certainly didn’t imagine that two decades later, it would still be part of my life. 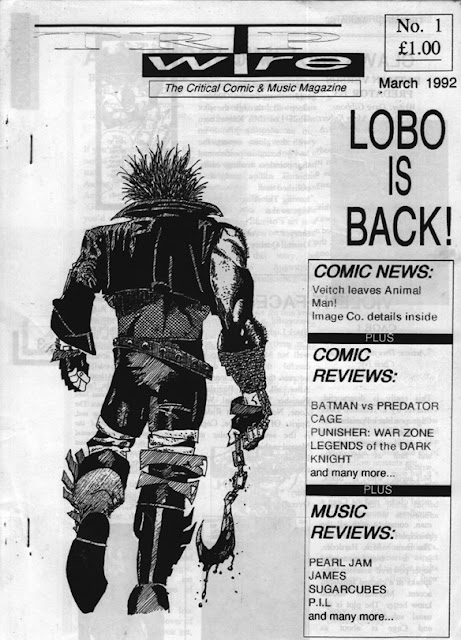 With each issue, we learnt a lot. When we began, we took a rather adversarial attitude to everything we covered whether it was features or reviews and we got a bit of a reputation as a very irreverent publication. But before long, we were getting columns from future comic superstars like Grant Morrison, Warren Ellis, Mark Millar and more. I suppose they liked the fact that we were a British magazine and they could pretty much say whatever they liked with no editorial interference. 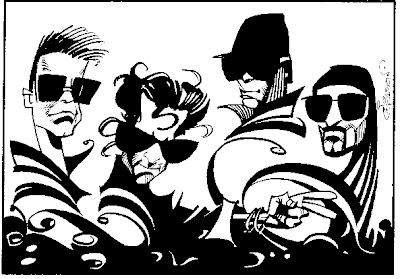 We spent a few years distributing it ourselves to comic shops in London and then in 1995, we went with Diamond, so it was circulated to comic shops in the UK and most importantly it also went to the US and Canada. By the time we had hit our fifth anniversary issue in 1997, crowned by an exclusive Frank Quitely 2020 Visions cover and packed with an introduction from Grant Morrison, interviews with Jamie Delano, James Robinson and the aforementioned Mr Quitely, we had a designer onboard, Michael Grover, who designed a logo for us. So we were fairly established. 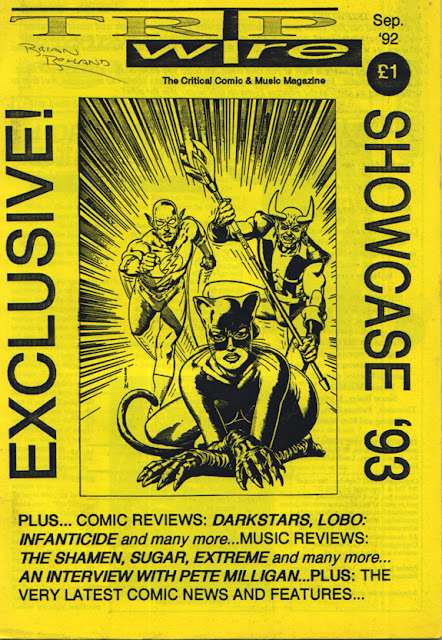 We built on what we had achieved from 1997 to 2003, publishing bi-monthly and getting a series of exclusive interviews with key figures in comics like Mike Mignola, Alan Moore and Frank Miller. We were building up a rapport with people like them and it was staggering to think that only a few years earlier, we were just a ragtag fanzine with handpasted pages. We dropped the music in 1999 because of a difference of opinion between myself and my ex-neighbour but we brought in film and TV thanks to another friend, Gary Marshall. This was a much better fit than the music and Marshall also brought a much needed extra sheen of professionalism to proceedings. We made the leap to a brief monthly in 2003 (we had attempted this before in 2000) but that was a disaster: we got royally shafted by our news-trade distributor and we only got three issues. I thought that was it for TRIPWIRE, and went off to freelance full-time.

Flash forward to 2007 and my friend, Andy Grossberg in the US, started trying to encourage me to bring TRIPWIRE back. After a little bit of coaxing, I relented and TRIPWIRE Annual 2007, in a new format, came out in July 2007. It did pretty well and so we decided to do one of them every year, usually in time for the massive San Diego Comicon. We were lucky enough to have a brand new Doctor Who cover from film and comic artist Tommy Lee Edwards for 2008’s Annual and that issue also did well for us. So we put out two issues in 2009: a Superhero Special in Feb and an Annual in July. 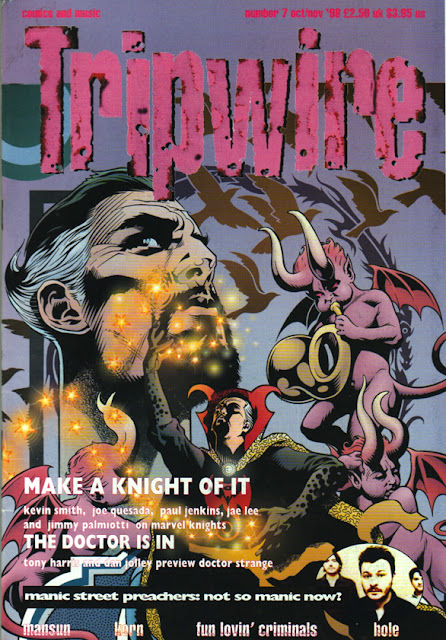 We published two more summer issues, in 2010 and 2011 but print was becoming very difficult to sustain as a model. But we wanted to commemorate the 20 year anniversary of the magazine in 2012 and my friend, Stevyn Colgan, of this here blog, had been talking to Unbound about doing one of his books.It seemed a good fit for us, which is why we decided to try and get it crowdfunded through them. Looking back at the old and more recent issues of TRIPWIRE, I realised what marked us out from other publications covering similar subjects. We always tried to punch above our weight and we also always tried to make them as professional as we could, both in design and content. The interesting thing is that I never started this as a career but as the years have progressed, I have become a professional journalist, writer and photographer and this is thanks in great part to working on TRIPWIRE. It has also made me appreciate persistence, where you realise that the only way to get anywhere, especially in the creative industries, is to keep on plugging away. 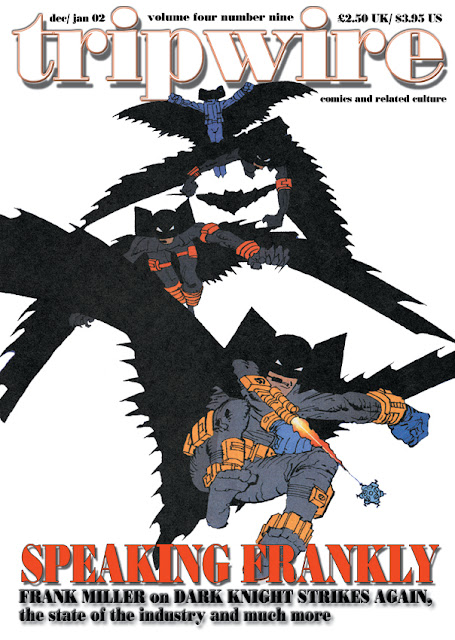 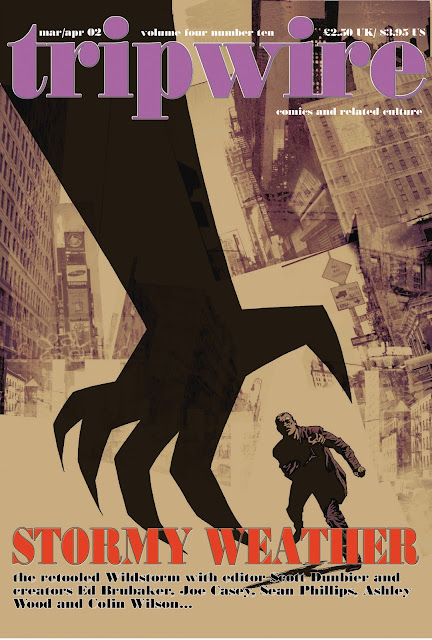 Stevyn Colgan is a great example of that: I have known him since 1997 and he has never given up. With his departure from the police force, he has been able to devote all of his time to his creative pursuits and I hope that he is able to enjoy the fruits of his long labours. He certainly deserves to. I’d like to thank Stevyn for this guest spot on his blog… 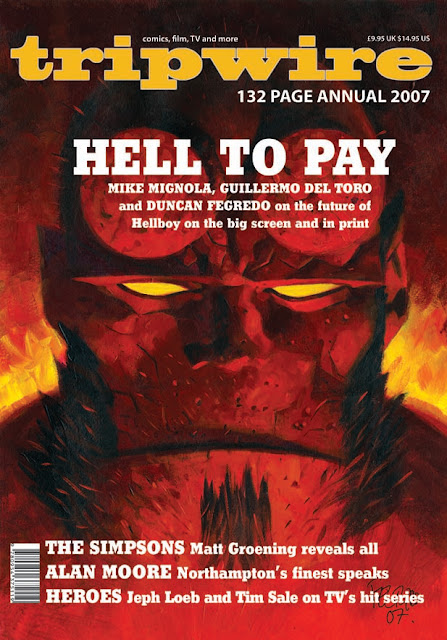 TRIPWIRE 20 is available to pledge at Unbound here. If you have enjoyed this blog post, or it has piqued your interest, please feel free to check it out.

I have a blog of my own, Walls and Bridges, if you wanted to check that out too, plus my flickr stream for my photography. Thanks for reading…
Posted by Stevyn Colgan at 00:00