My Toy Story: The Viewmaster

Here's a feature I wrote recently for Stuart Witts' excellent blog Stay Happy and don't Die. He has a regular item called My Toy Stories where he asks people for their memories of a prized and beloved item. Here's mine ... 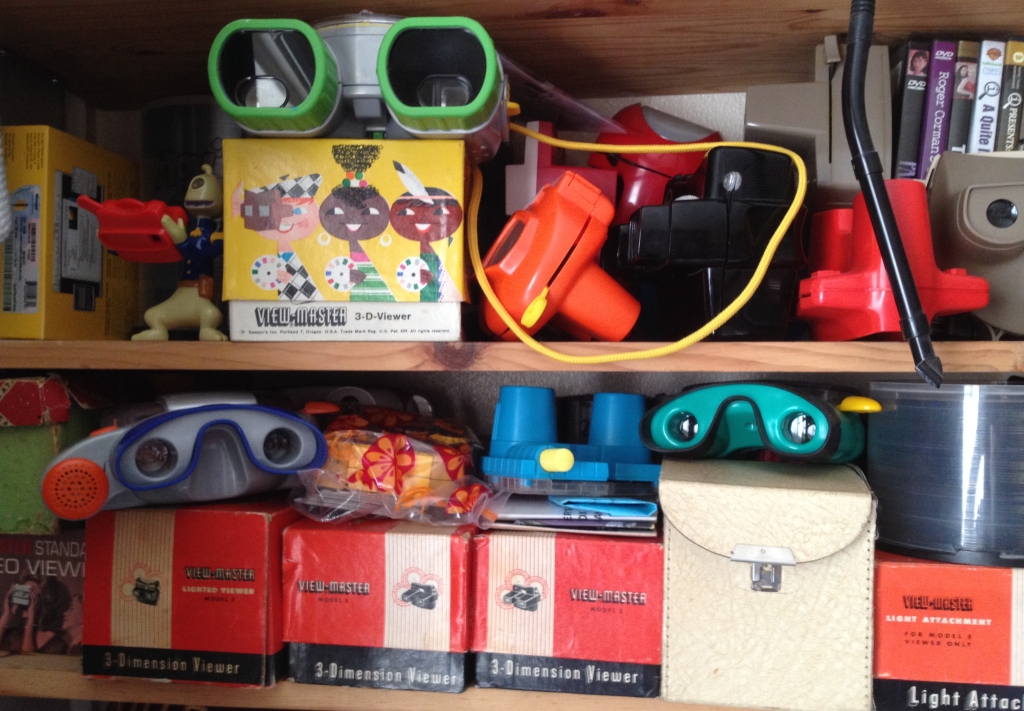 Words cannot quite contain my love for these glorious things.

I got my first Viewmaster in 1970 and I still have it; it was a fawn coloured Model G (1959-1977) with a set of circular ‘reels’ that allowed me to see the Apollo 11 moon landing in glorious 3D technicolour. I cannot begin to describe the thrill I felt at first viewing. Just a year previously, at the age of eight, I’d watched the actual moon landing, live on television, in fuzzy shades of grey and it was the most exciting thing that had ever happened to me. Even now, at the starting-to-creak age of 52, I still maintain that it was probably one of the most momentous days of my life. Has TV ever broadcast anything quite so extraordinary since? The Viewmaster, and the treat of seeing it all again in 3D deliciousness was a second bite of the pie. I was hooked. I wanted to eat all the pies.

For subsequent birthdays and Christmases, everyone knew what to get me and my collection of reels grew and grew. My more enlightened relatives bought me reels that they knew I’d squee over; Star Trek, Thunderbirds and anything involving dinosaurs. Other, less well-informed rellies bought me geographical reels – the most prolific of Viewmaster subjects – but I didn’t mind. As a pre-pubescent Cornish boy who regarded visiting Plymouth was ‘going abroad’, it was quite mind-blowing to see the Grand Canyon and the Swiss Alps in three dimensions.

As my teenage years approached, other distractions pulled me away from the Viewmaster: school, music, girls…

Anyway, my Model G and my collection of reels went into the attic and were almost forgotten about. Time passed and I moved to London and started work. I met a lady. We got married. We had kids. We bought a house. And then, when it was approaching my daughter’s 5th birthday, I was rummaging around in Toys R Us when I happened upon a Viewmaster. And what amazed me about it was that it looked just like my old machine, albeit slightly curvier and chunkier and a bright red in colour. I bought it immediately (with some Teenage Mutant Ninja Turtles reels as I recall). And she loved it! She loved it just as much as I’d loved mine. It inspired me to dig my old 70s machine out of the attic and I discovered with glee that my reels fitted her spanking new Model L just as her reels fitted my Model G. That’s one of the brilliant things about the Viewmaster; the reels have never changed. You can watch a 1952 reel of Queen Elizabeth’s coronation on a brand new 2014 Model O and you can watch a 2014 Ben 10 reel on a 1938 Benite plastic clamshell Model A. I can’t think of a single other medium that has remained completely unchanged while the machines used to view it have continued to evolve.

Anyway, to cut a long story short, I now have all the pies. I have a pretty complete collection of Viewmasters; a representative machine of (almost) every model ever produced and thousands of reels. And I absolutely love them. I even got to share my enthusiasm with Stephen Fry, Alan Davies and some QI guests recently when, for the ‘Kitsch’ show, I let them borrow some of my early Bakelite model Cs and Ds to demonstrate that the US military once used them to train gunners in aircraft recognition. Oh yes, Viewmasters aren’t just for kids you know. Believe me, the panellists were all stupidly excited to play with them and were amazed by the wartime reels (also from my collection). 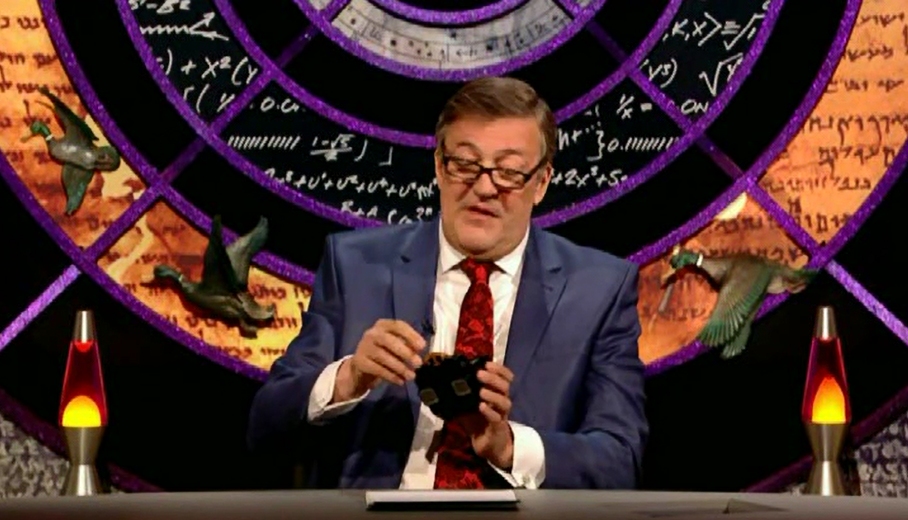 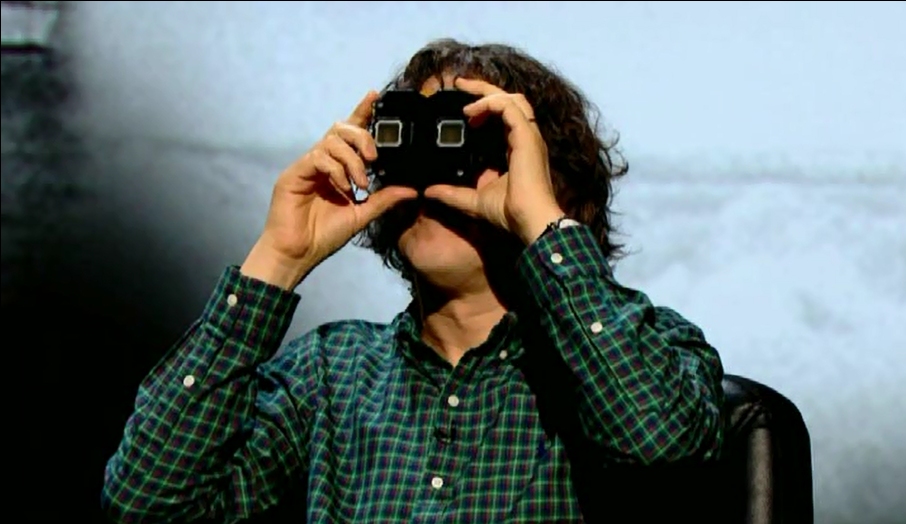 The Viewmaster is/was the best toy I’ve ever had (Lego a close second, mind). You can read about historical events in books and watch documentaries on the TV, but seeing Berlin after the Blitz in high definition 3D really takes you there. Nothing beats seeing London in the 1950s in glorious stereoscopic colour. Nothing beats seeing terrible, inaccurate depictions of dinosaurs from the 1950s. The Viewmaster is history and travel and science and all your favourite TV shows and films presented in a completely unique way.

3D is much-maligned and horribly ubiquitous these days. But it wasn’t always that way. There was a time when it was magical. It certainly was to one nine year old Cornish lad. And, for him at least, it still is. 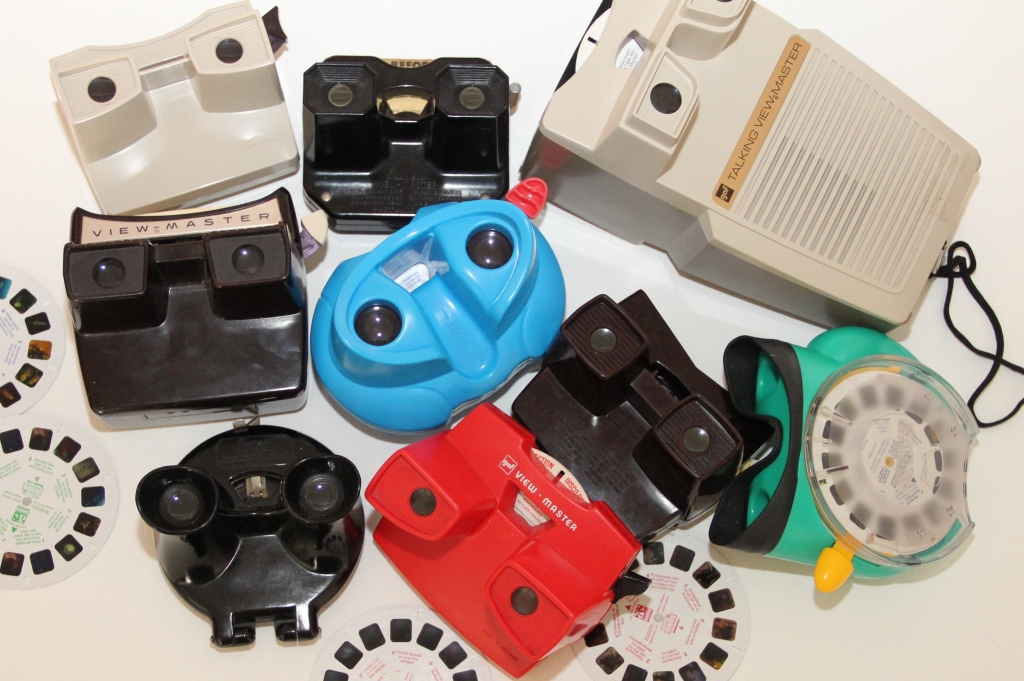 To discover more about the wonder of the Viewmaster, visit the visual reference guide or the website of Mary-Anne and Wolfgang Sells, THE Viewmaster experts.