In the mid to late 1990s, I shared an office with a wonderfully funny chap called Chris Hale. We both loved television and film and we were both aspiring comedy writers so we would often amuse ourselves by deconstructing children's TV shows which, if you look at them closely, make absolutely no sense whatsoever. I've done the same thing on this blog a couple of times since, firstly here with Camberwick Green and here with Thunderbirds. Or, if you like, you can watch the Thunderbirds one in podcasty form:

Anyway, Chris and I used to love pulling apart shows like Fireman Sam, which was set in the Welsh village of Pontypandy; a very strange place indeed. To begin with, the entire population of the village consisted of just nine people: Fireman Sam, fireman Elvis Cridlington, Station Officer Steele, bus driver Trevor Evans, shopkeeper Dilys Price and her naughty son Norman Price, Sam's nephew James and niece Sarah, and a suspiciously-named Italian restauranteur called Bella Lasagne (Yes, lots more characters have been introduced since but this was the entire cast of the original series). What's odd about that you ask? Well, what's odd is that neither of the two women in the village were married to any of the men and all of the men were apparently single. Secondly, all of the men in the village were fireman - even bus driver Trevor Evans was an auxiliary. How many fires did the village have for goodness' sake? Did the non-firemen - Dilys and Bella - take it in turns to set their properties ablaze? What in Hell was the fire service thinking in allocating resources this way? And what kind of mad business plan did Bella have setting up a restaurant for eight potential customers, three of which are children? It's a big bucket of madness.


Now you get the gist of the kind of conversations Chris and I used to enjoy. So you can maybe imagine my glee when Chris turned up for work one morning and presented me with a story he'd written called Postman Pat's Bloody Day. It was very funny and revealed the fact that gawky letter carrier Pat Clifton was, in fact, a sleeper assassin living in deep cover in the village of Greendale. Once 'activated', the carnage was copious and grisly. The story amused me so much I even did a few doodles to accompany it and, to my delight, discovered recently that I still had them tucked away in an old sketchbook: 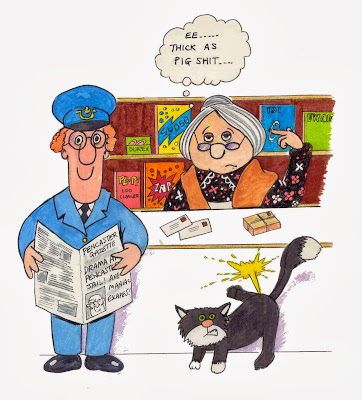 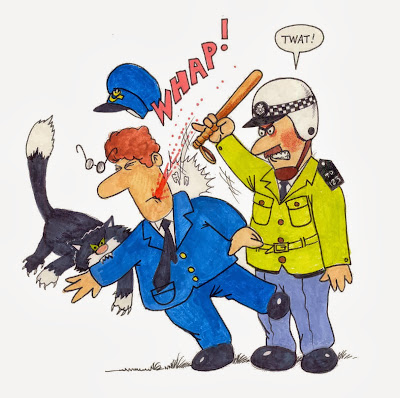 Finding them again made me wonder about whether I could turn the idea into a painting. I love taking well-known TV characters and putting them in ridiculous situations - like I did with George, Zippy and Bungle, and Bagpuss: 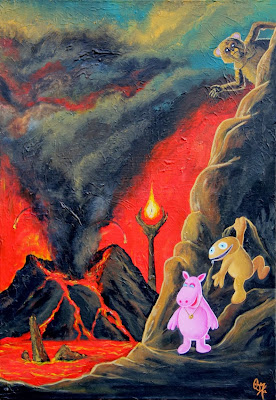 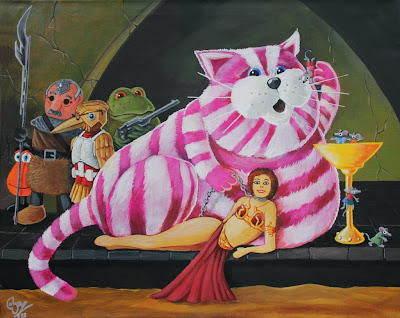 So, what to do with Postman Pat? I was pondering this very thought when someone on the telly mentioned the phenomenon of 'video nasties' in the early 1980s. Chief among these were titles like Driller Killer, I Spit On Your Grave and the classic Texas Chainsaw Massacre. And I suddenly thought to myself ... 'That's it! The Greendale Chainsaw Massacre!'
Thus it was, I set to work on what became a very quick and dirty painting. 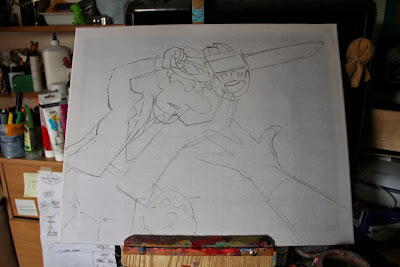 I based the composition on this poster for the original film: 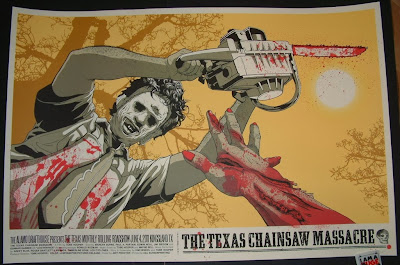 Painting began in earnest with me blocking out the main colour areas and then starting to add light and shade: 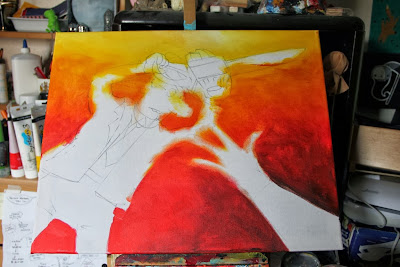 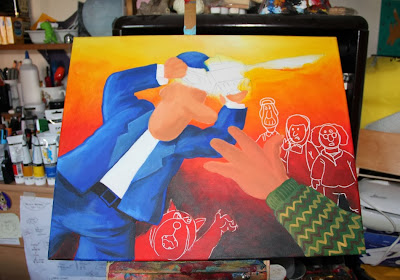 I then marked the position of my cast of secondary characters in white Posca pen and gave some more attention to the background before painting them in: 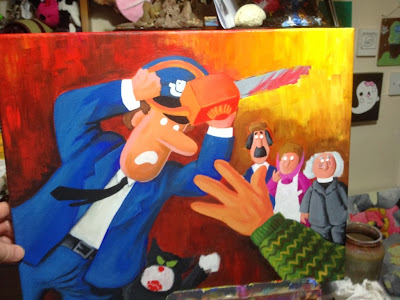 Final details were added - including making the chainsaw look like the kind of chainsaw they might have on a kid's TV show - and the painting was complete: 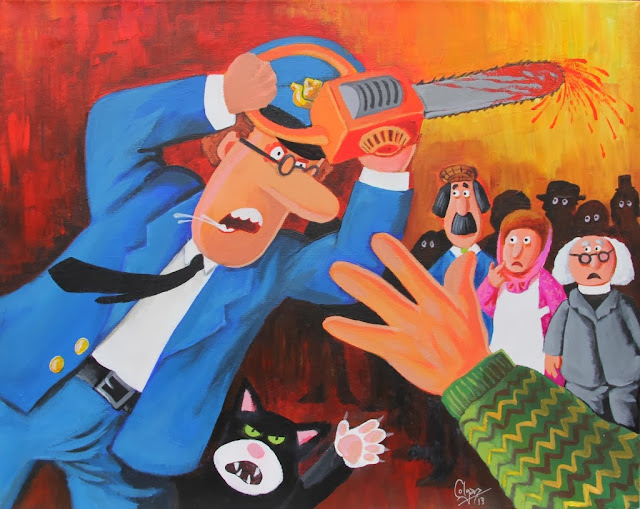