I was doing some research about coats of arms this week. And, while discussing this with my friends Terry Bergin and Mo McFarland, Terry unexpectedly said: 'Where I work there's a shield on display that includes three topless women.' Terry is a barrister. Naturally, I was somewhat intrigued. Lions, yes. Gryphons, occasionally. But Page 3 girls? Anyway, Terry sent me this photo the next day: 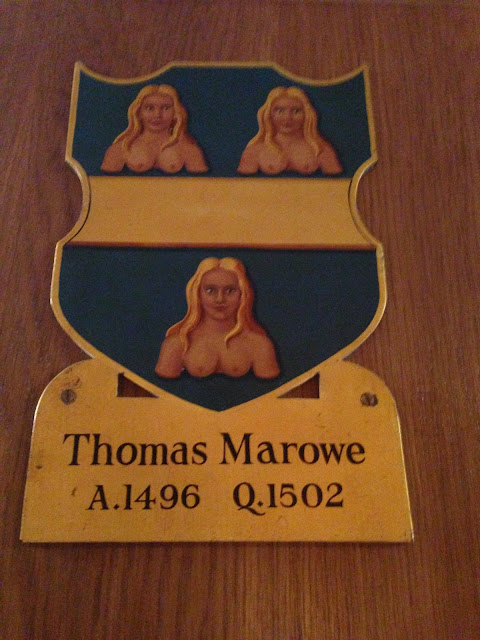 I was interested to know who saucy Thomas Marowe was so I went looking. I discovered that he was once the 'Common Serjeant of London' (full title The Serjeant-at-Law in the Common Hall) and took over the role from Thomas Frowyk in 1496. As this is the first date on the shield above and it is hanging in an area where barristers have their offices, this would seem to represent his dates in office. The Common Serjeant is a title, first recorded in 1291, for the second most senior permanent judge of the Central Criminal Court after the Recorder of London. The Serjeant acts as deputy to the Recorder. The office was once held by the infamous 'Hanging Judge' George Jeffries but is now in the hands of the more moderate Judge Nicholas Hilliard, QC, who was appointed on 16th May 2013. He is the 80th incumbent. So that was quite interesting. But then Mo -  a professional researcher and archivist - discovered more about the arms themselves.

One William Marowe (d. 1464) was a wealthy property owner who was Lord Mayor of London in 1455. He owned quays on the River Thames and a brewhouse called Le Maydenhede (The Maiden's Head) on the north side of Thames Street, three doors along from the eastern corner of Bear Lane in Petty Wales. When he died, it passed onto his son - also called William (b.1453) - who first adopted the coat of arms. W. F. Carter, who wrote a history of the Marowe family, believes that the arms evolved from the sign that would have been hung on the front of the brewhouse building. The arms are officially described as: 'Azure a Fess between three maiden's heads couped Argent crined Or'. Carter espouses the notion that the maiden depicted was the virgin Mary as the 'ground' is blue (azure) in the later arms, a colour invariably associated with her. If this biblical connotation is true, it was evidently lost on later Marowe armigers who emblazoned 'very profane or impious and immodest ladies as charges on their shields'.

I can't find out much more about Thomas Marowe. I know that he was William jnr's brother and one of five children: William, Thomas, Johanna, Agnes and Katherine. I also know that Thomas married a woman called Isabella Brome but I can find no record of their having children. I wonder if he actively used his family arms? Whether he did or didn't, they are now permanently associated with him.

Having found this all out, we wondered whether this was the only instance of  heraldic use of breasts ... and we soon discovered that it wasn't:

Those are the rather bizarre arms of Peter Dodge of Stockport, first recorded in 1613 and described thus:

ARMS (in trick).—Barry of six Or and Sable, on a pale Gules a woman’s dugg or breast distilling drops of milk Argent. CREST.—A demi sea-dog rampant guardant Sable, tufted and collared Or.

What a bizarre thing. As it happens, there is some debate over its authenticity. And, anyway, as you can read here, the 'dugg' was later changed into a 'weeping eye' to appease Victorian sensibilities.