Friday night was all about dinosaurs, insect sex and arthropod cuisine.

The Natural History Museum in London was hosting one of its occasional Dino snores sleep-over events and I was invited to come along and join in by my friend Dr Erica McAlister. She's curator of flies at the NHM and a fantastic science communicator (here's her blog).

There are two types of Dino snores events; one for kids, one for adults. At the kids' event, some 500 tiny excited persons cram into the dinosaur hall to sleep (or not) in the shadow of the iconic Dippy the Diplodocus (I have an interesting connection to her. See here). They're also entertained with talks, activities and stories. The adult event is much the same; there are just fewer attendees (the practicalities of space), and the talks and activities are more grown up. Plus, there's a three course meal. Or four, if you count the insects. But I'm getting ahead of myself ...

I arrived at 7.30pm at the grand entrance in Cromwell Road and there was already a queue. Some had embraced the 'fun' aspect of the event and had turned up in their onesies. 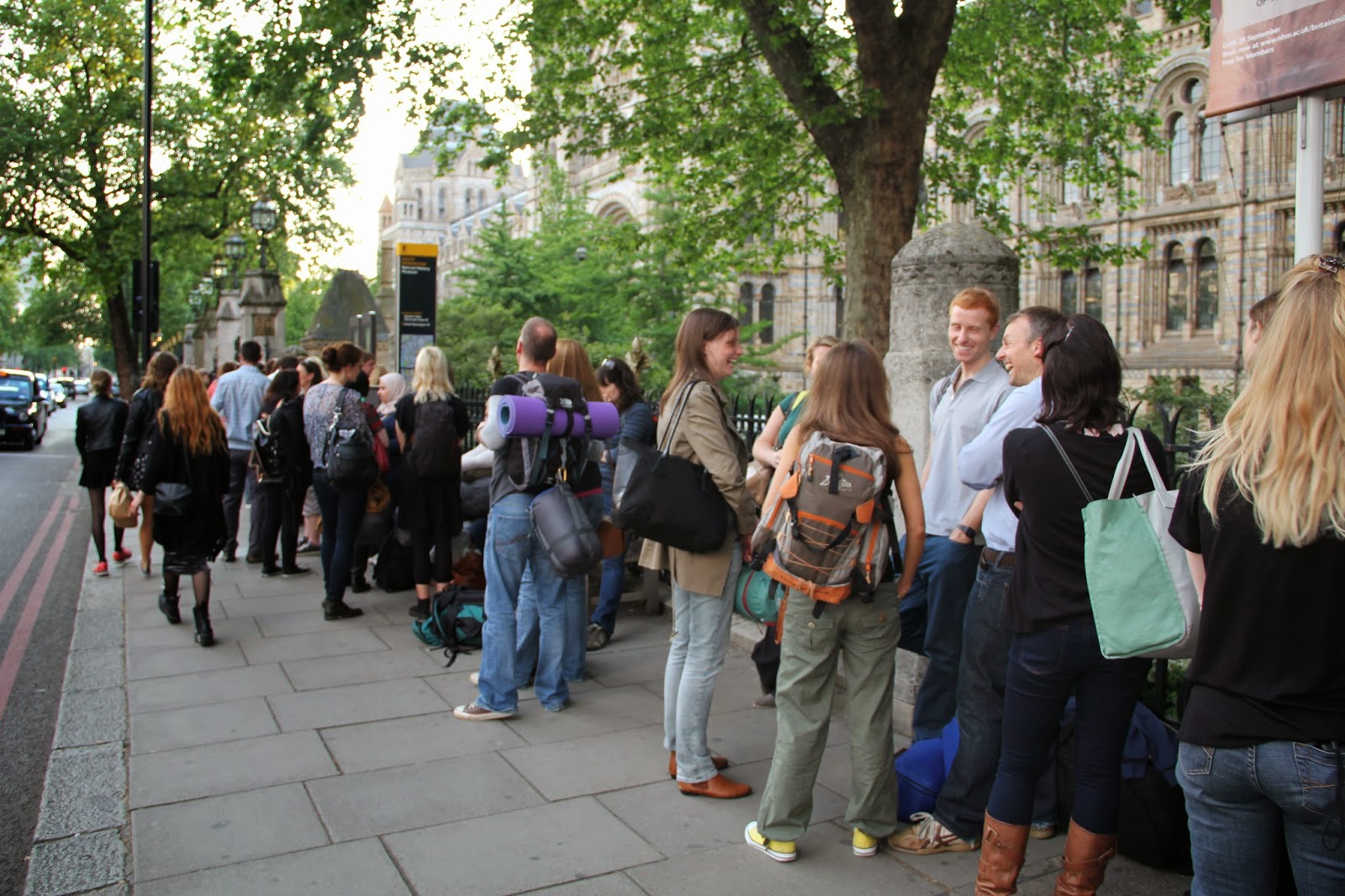 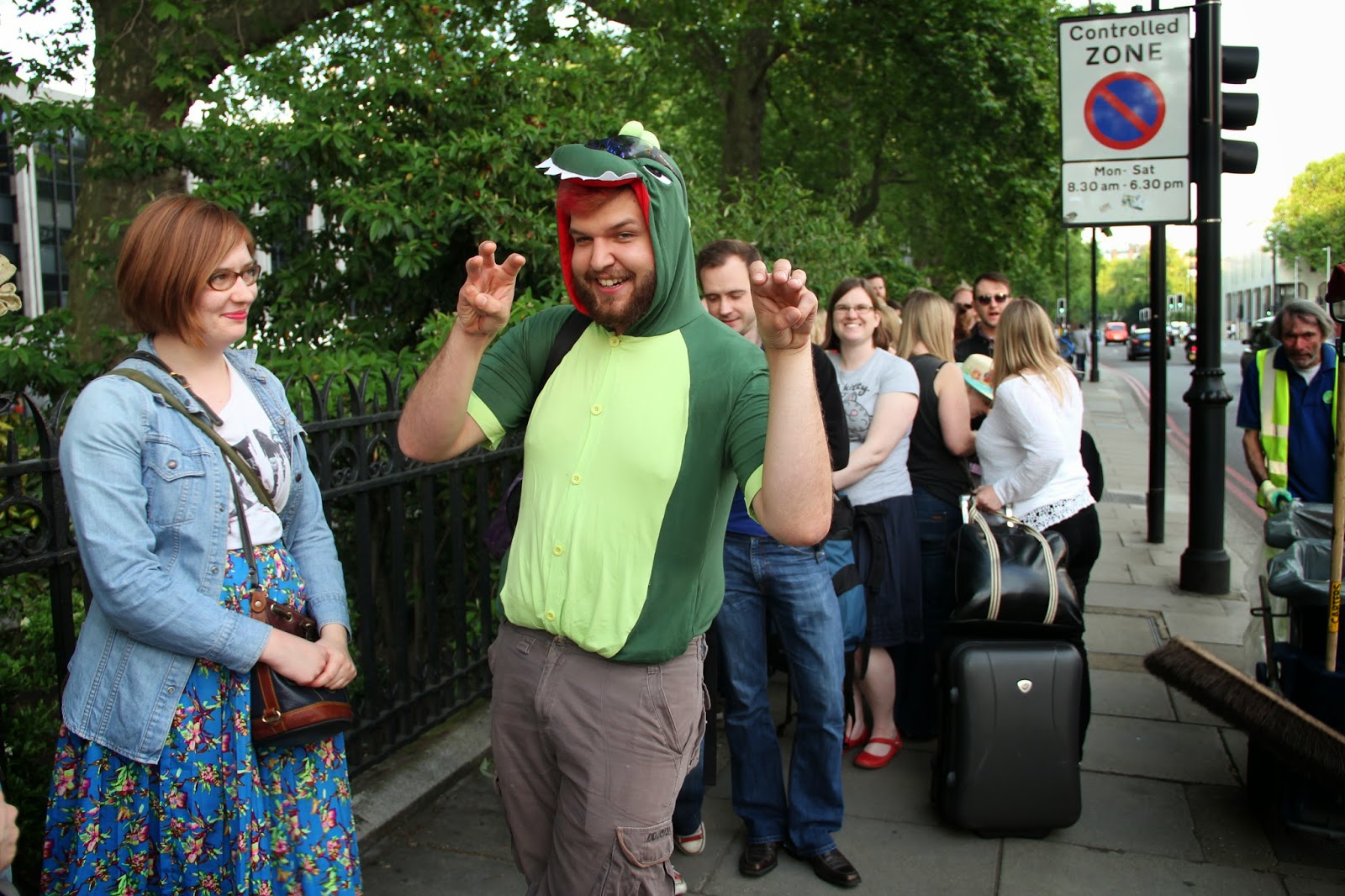 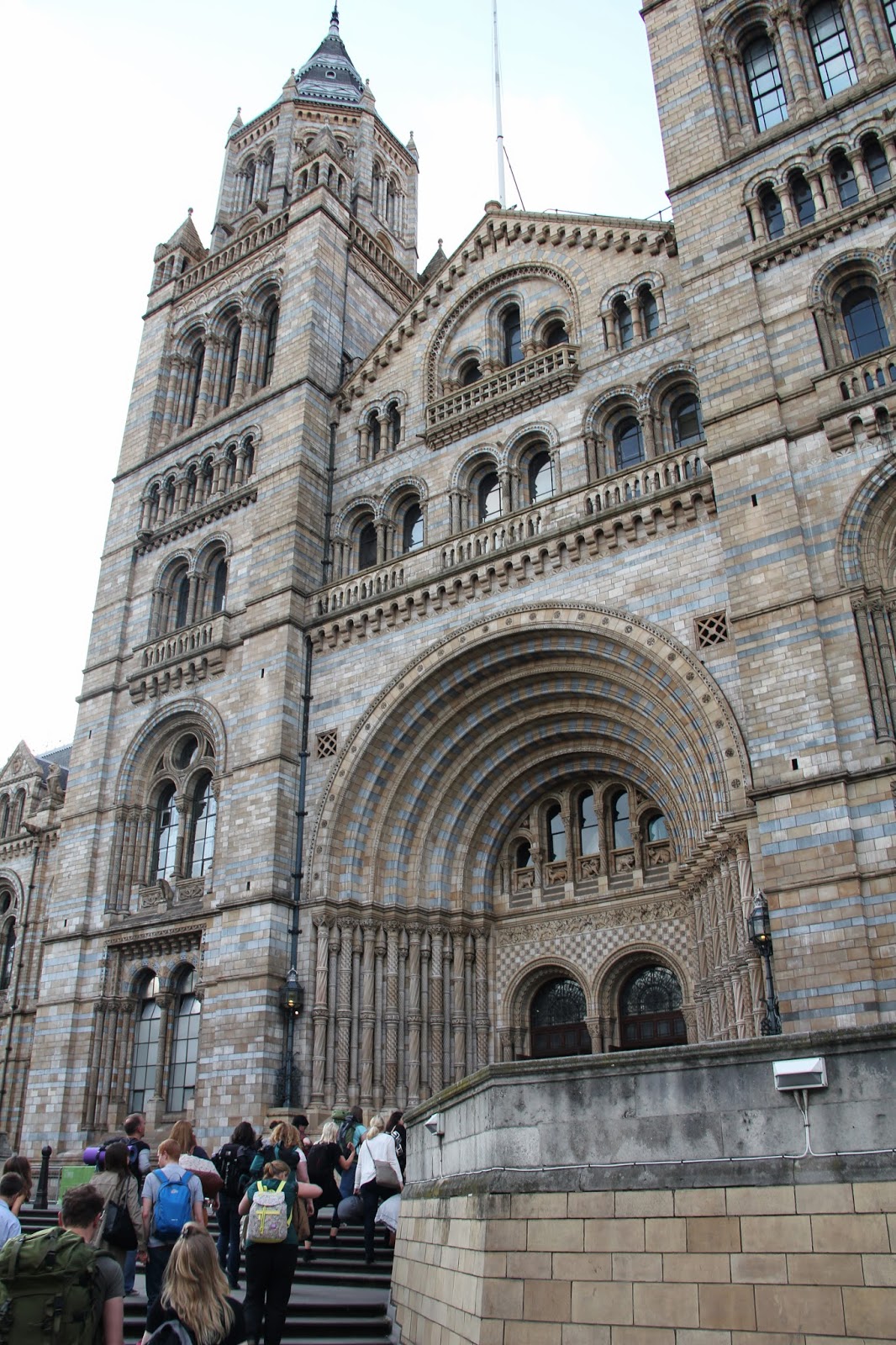 After a while we all traipsed inside and this is when the seasoned campaigners had the advantage over us newbies. They headed straight for the many alcoves dotted around the outside of the grand hall, ensuring some small degree of privacy during the night. The rest of us slapped our foreheads and set up camp around Dippy herself. Then, naturally, we hit the bar. 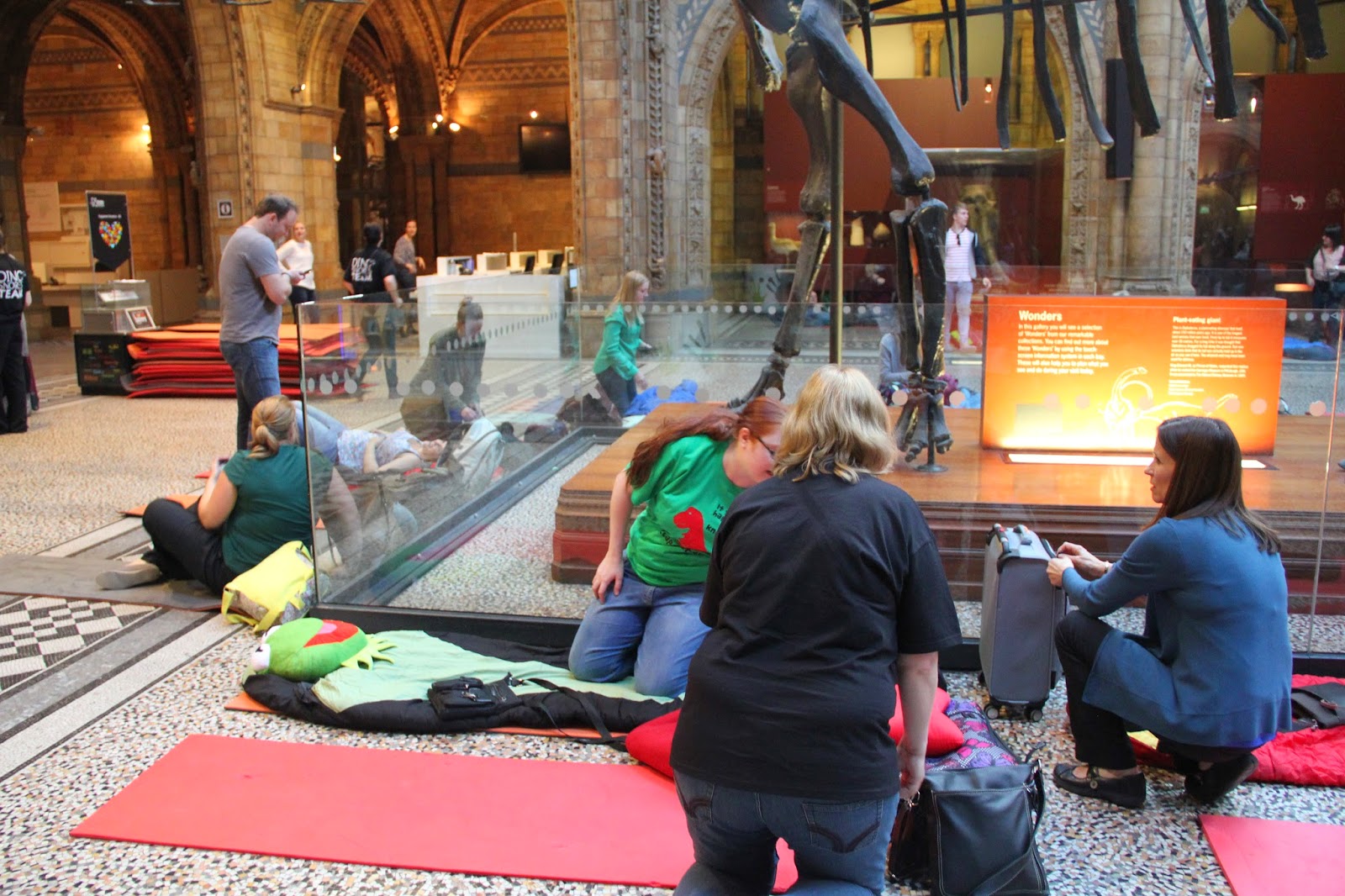 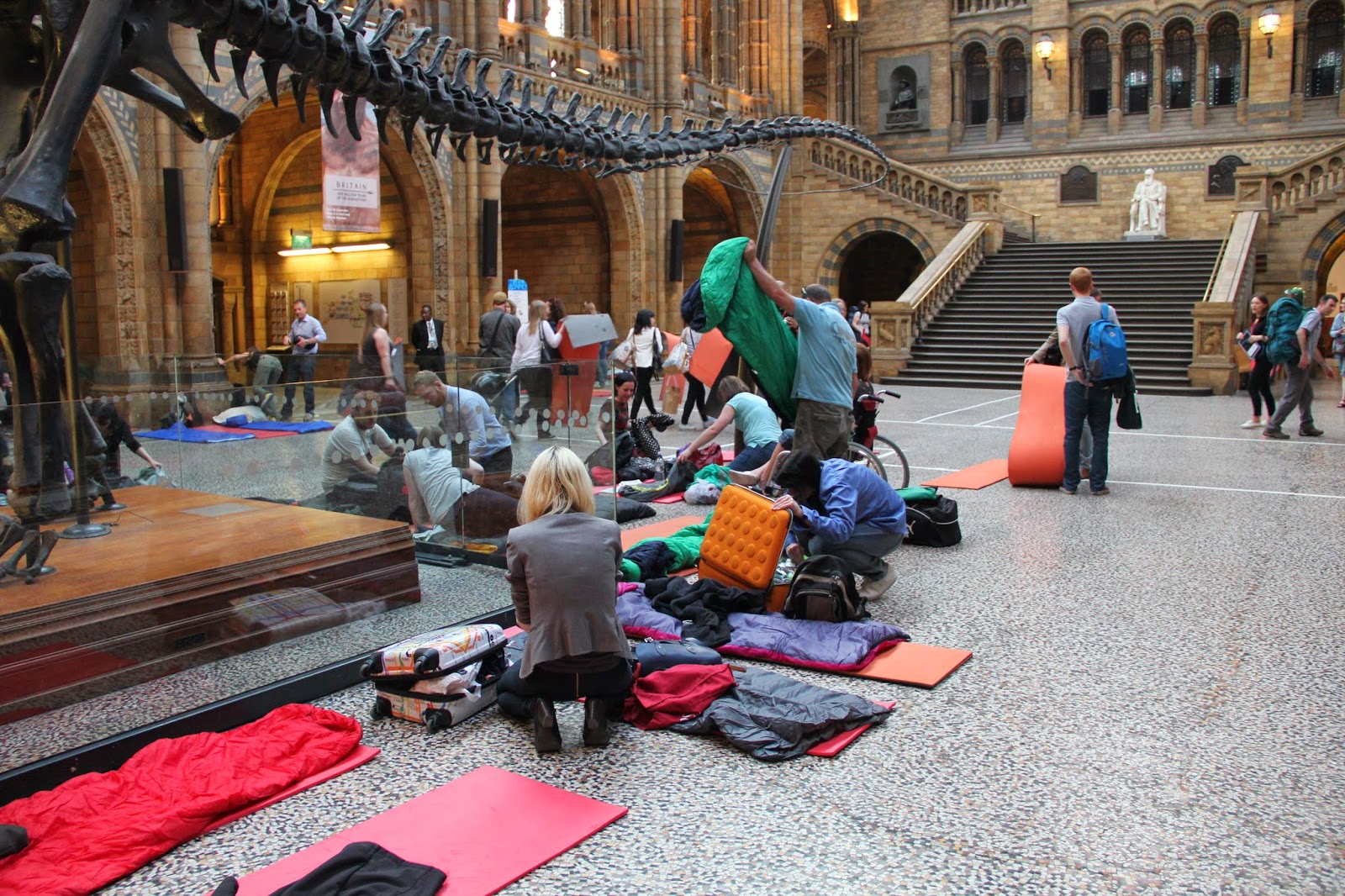 Several drinks later we were given a very nice three course meal and a more detailed description of the events we could look forward to. Oh, and a list of things we shouldn't do such as roaming off around the museum and touching things we shouldn't touch - including each other. To be honest, I don't think that sex was uppermost in most people's minds, especially given the huge doses of garlic the chefs added to the food.

There were raffles and prize-givings too and I got the chance to meet some of the people who'd be entertaining the crowds. First off was the extraordinary Luis V Rey, one of my favourite palaeo-artists and illustrator of countless dinosaur books, many of which I own. I'm a huge fan; his reconstructions are always dynamic and ground-breaking in terms of his use of colour and texture for dinosaur skin, feathers etc. but are always based on good science. He was way ahead of other palaeo-artists in adding wattles and crests to his dinos; something that has been recently confirmed as true. His blog is wonderful. Such a nice man too. 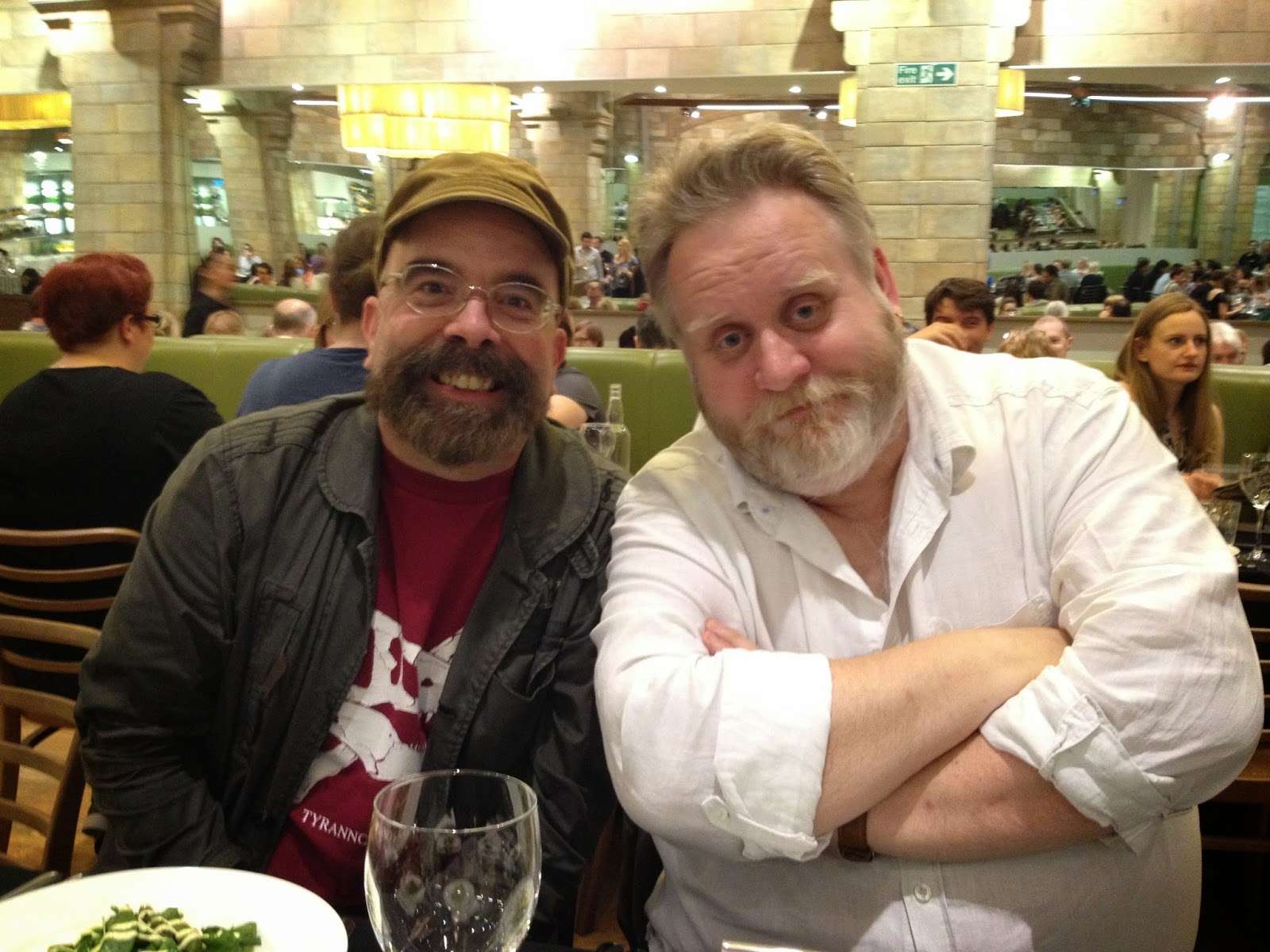 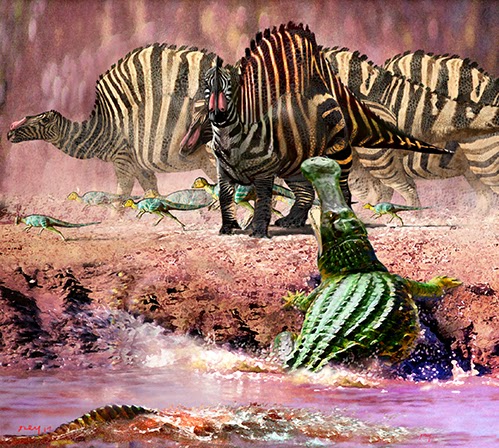 Then there was the aforementioned Erica (seen here with Luis' partner Carmen) who would later tell us all about insect how's-yer-father, and the ever-splendid Simon D Watt. 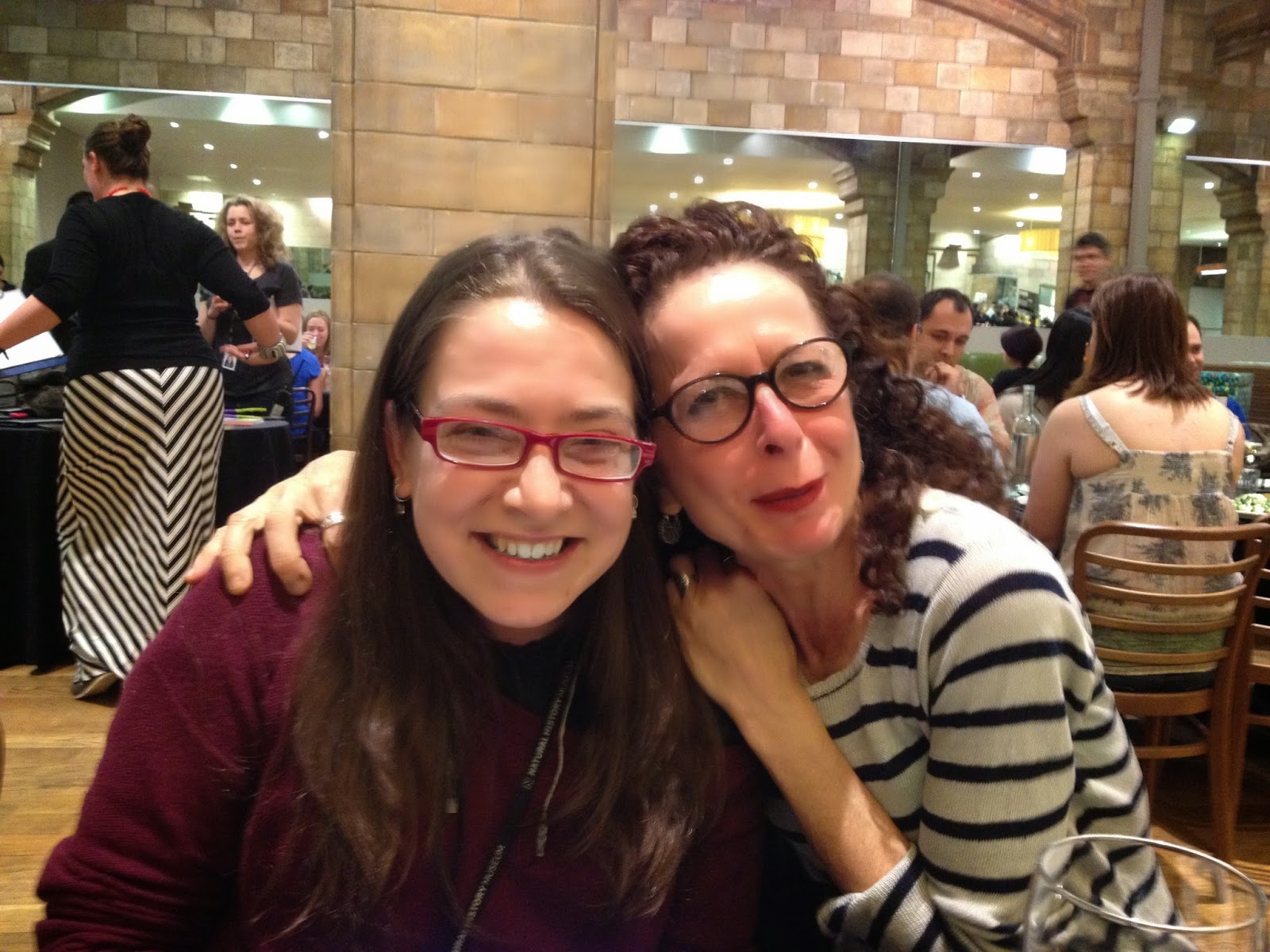 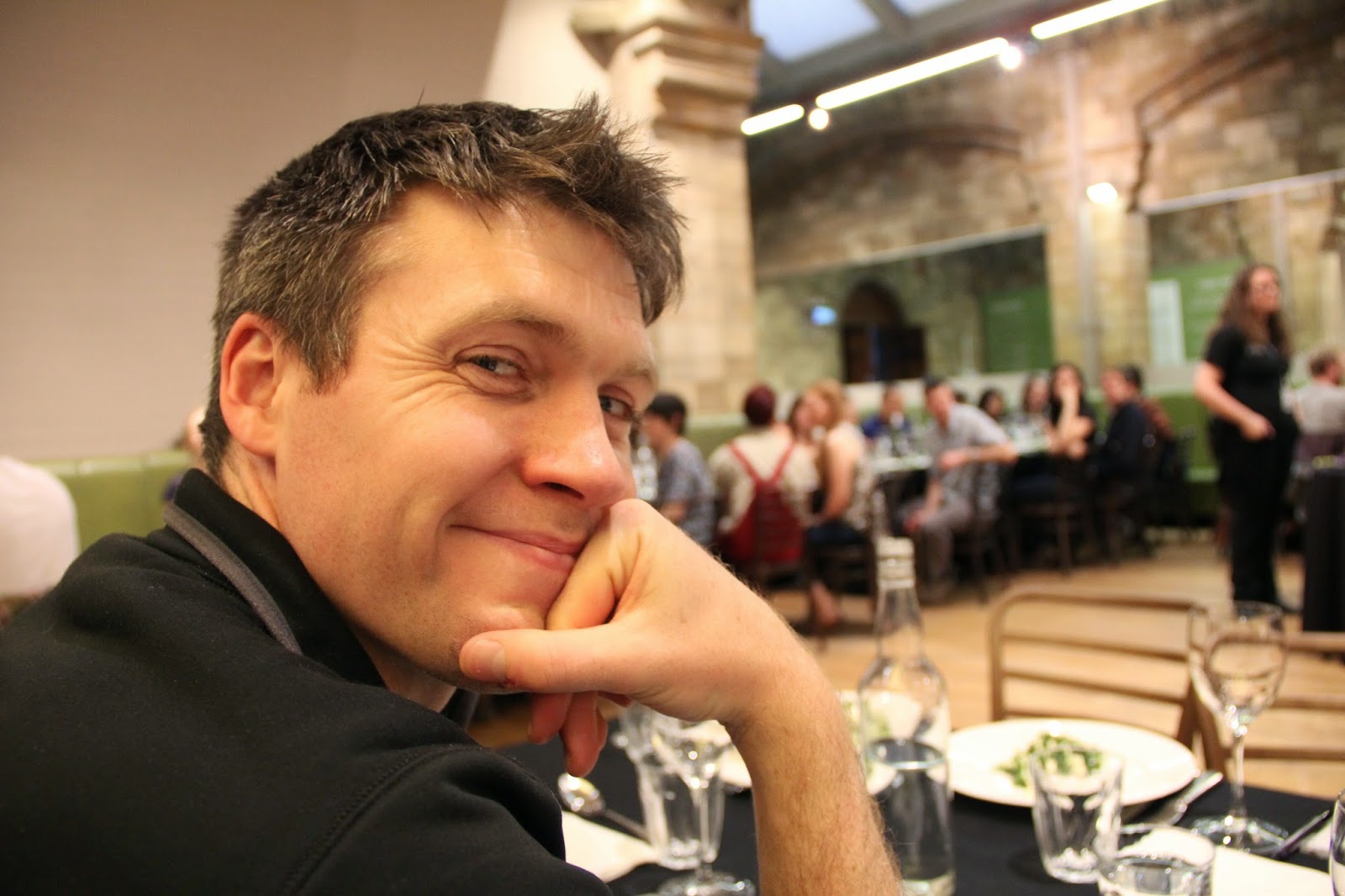 You may recognise Simon as one of the presenters of the TV series Inside Nature's Giants. He's also a great stand-up, a brilliant science communicator and the brains behind the Ugly Animal Preservation Society. His shows are a glorious mixture of science and comedy. 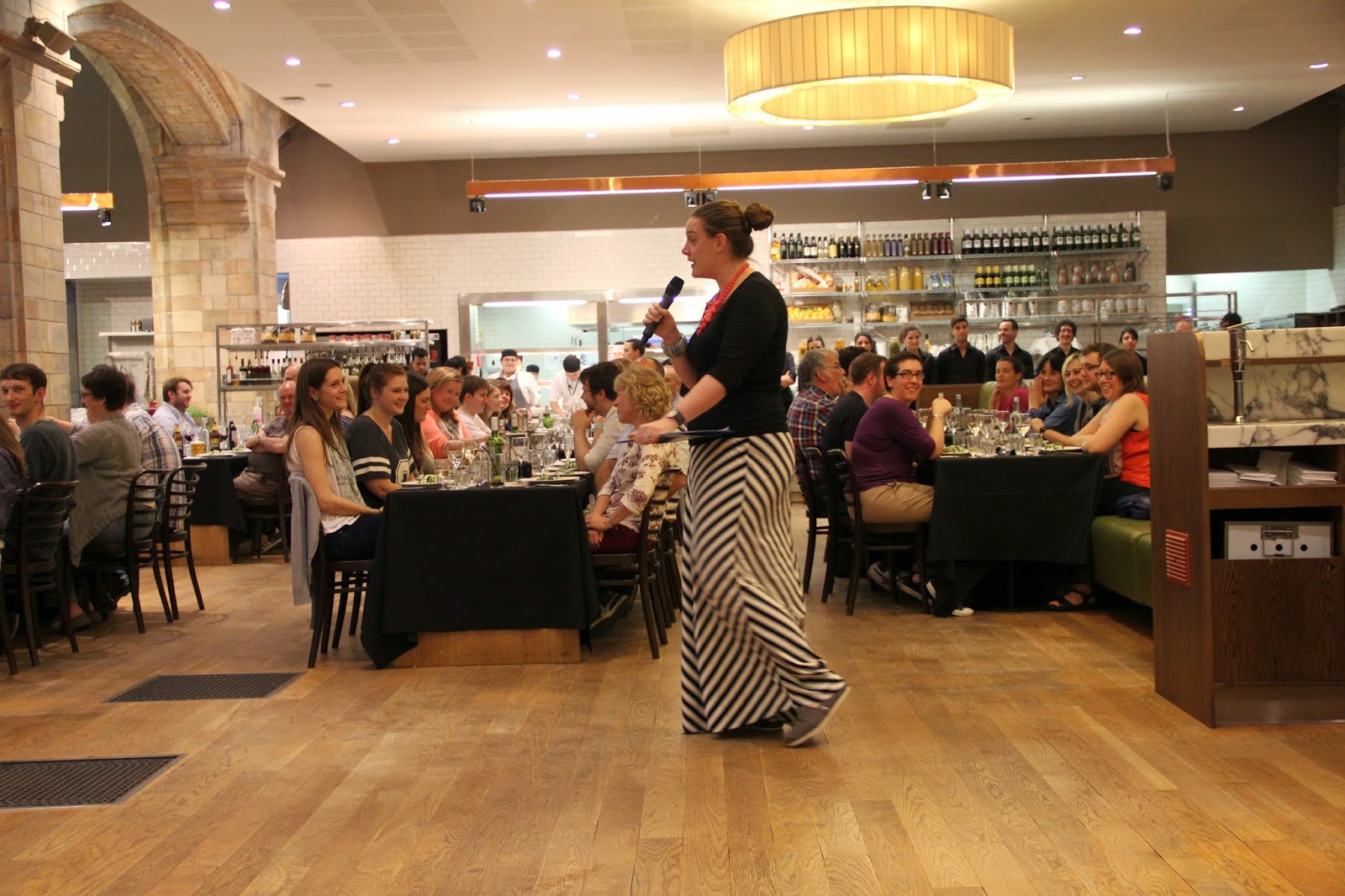 Food (and garlic) over, we then peeled off in different directions to watch the various events. I chose to watch Erica's talk and Luis's 'How to draw dinosaurs' talk. Sadly, this meant that I missed Simon's (Sorry!) but I've seen him speak many times before (he also performed at the live Museum Of Curiosity show we staged at the NHM in 2012) and I know he'll have been brilliant. Erica, as usual, regaled us with hilariously grotesque tales of traumatic insemination, insatiable weevil sex maniacs, female penises and plugging genital orifices with your head. The world of insect sex is nothing if not enertaining. Then Luis showed us all the process for putting the meat on the bones when drawing dinosaurs. Great talks, both. 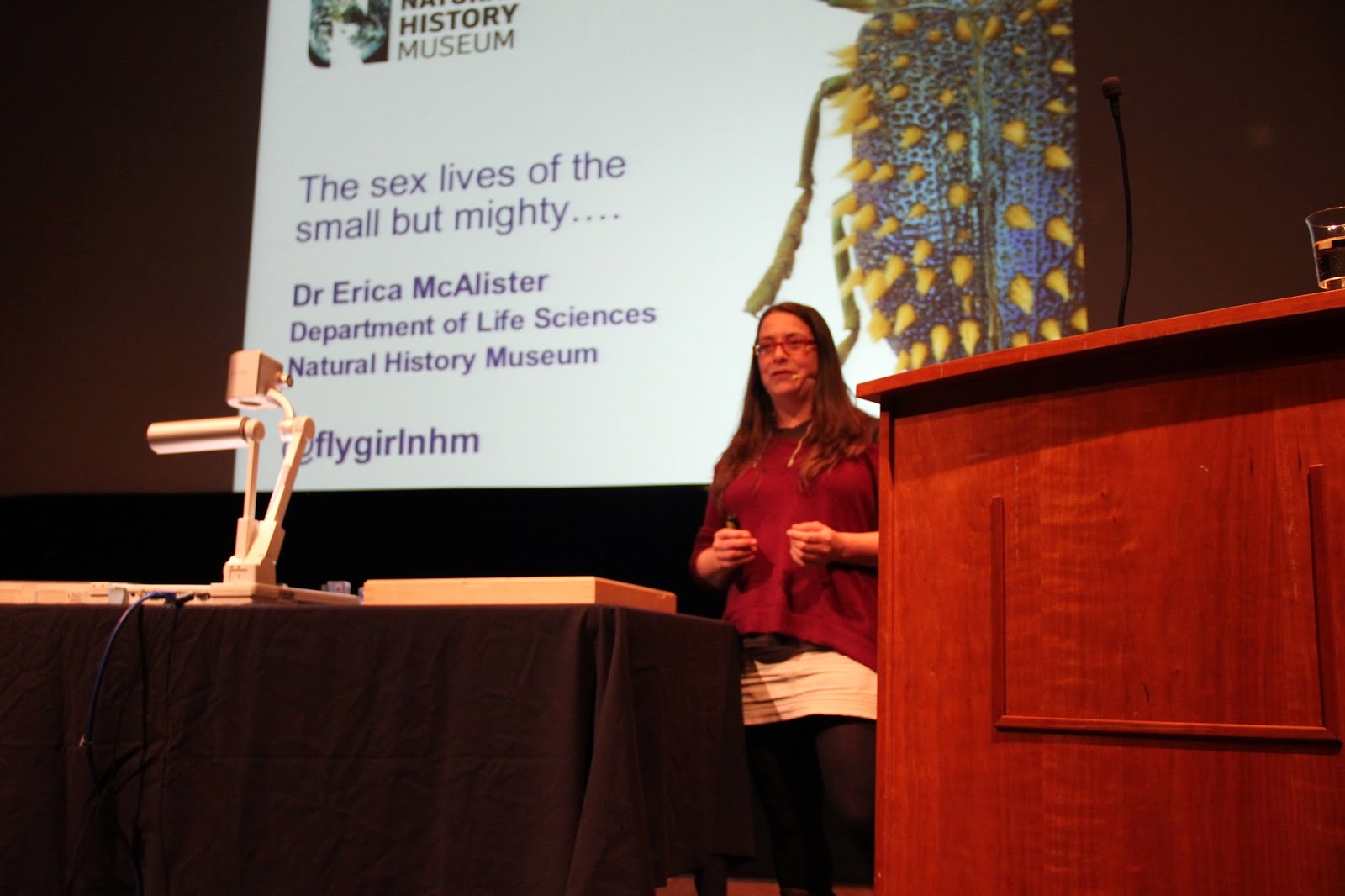 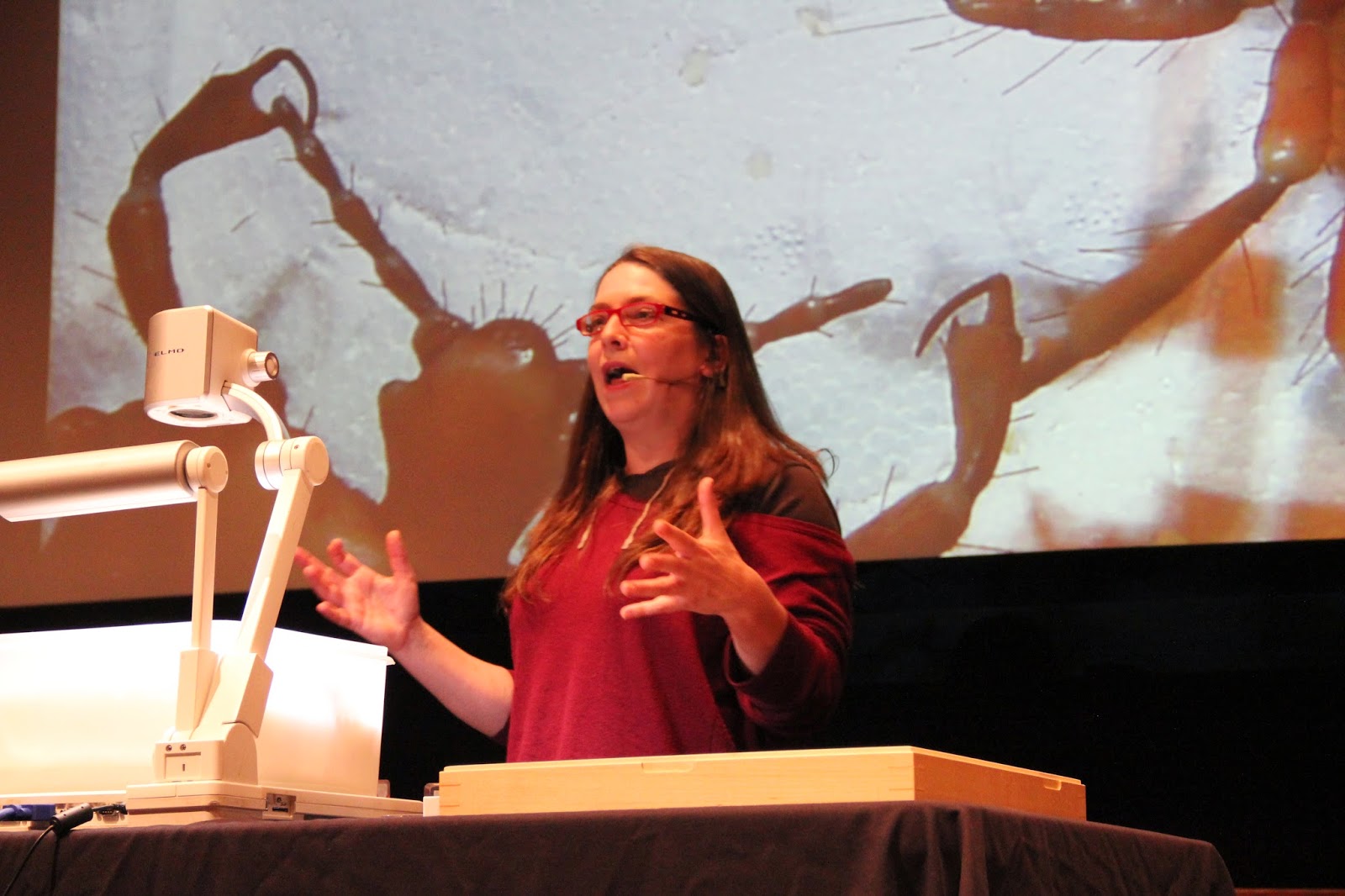 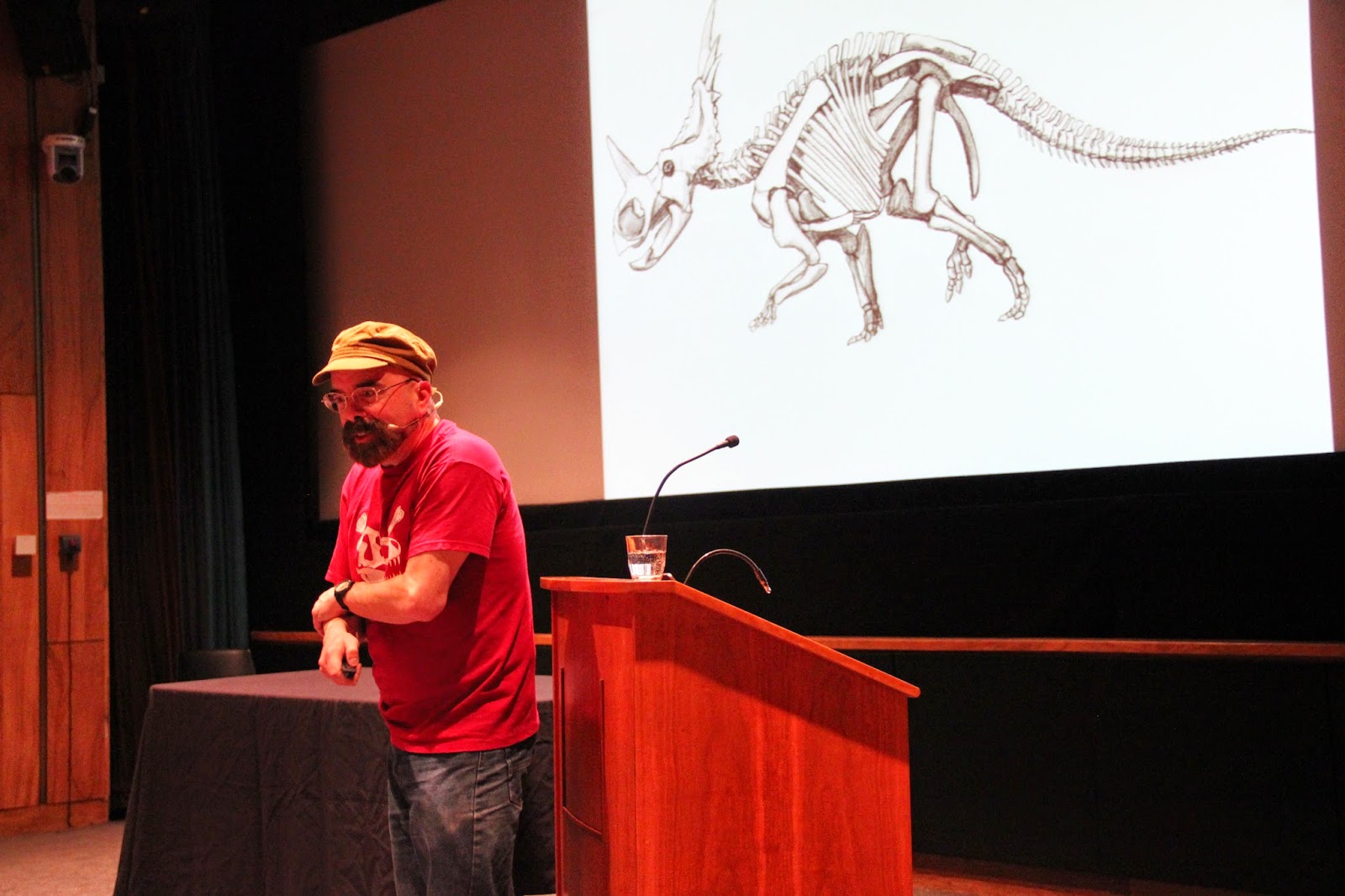 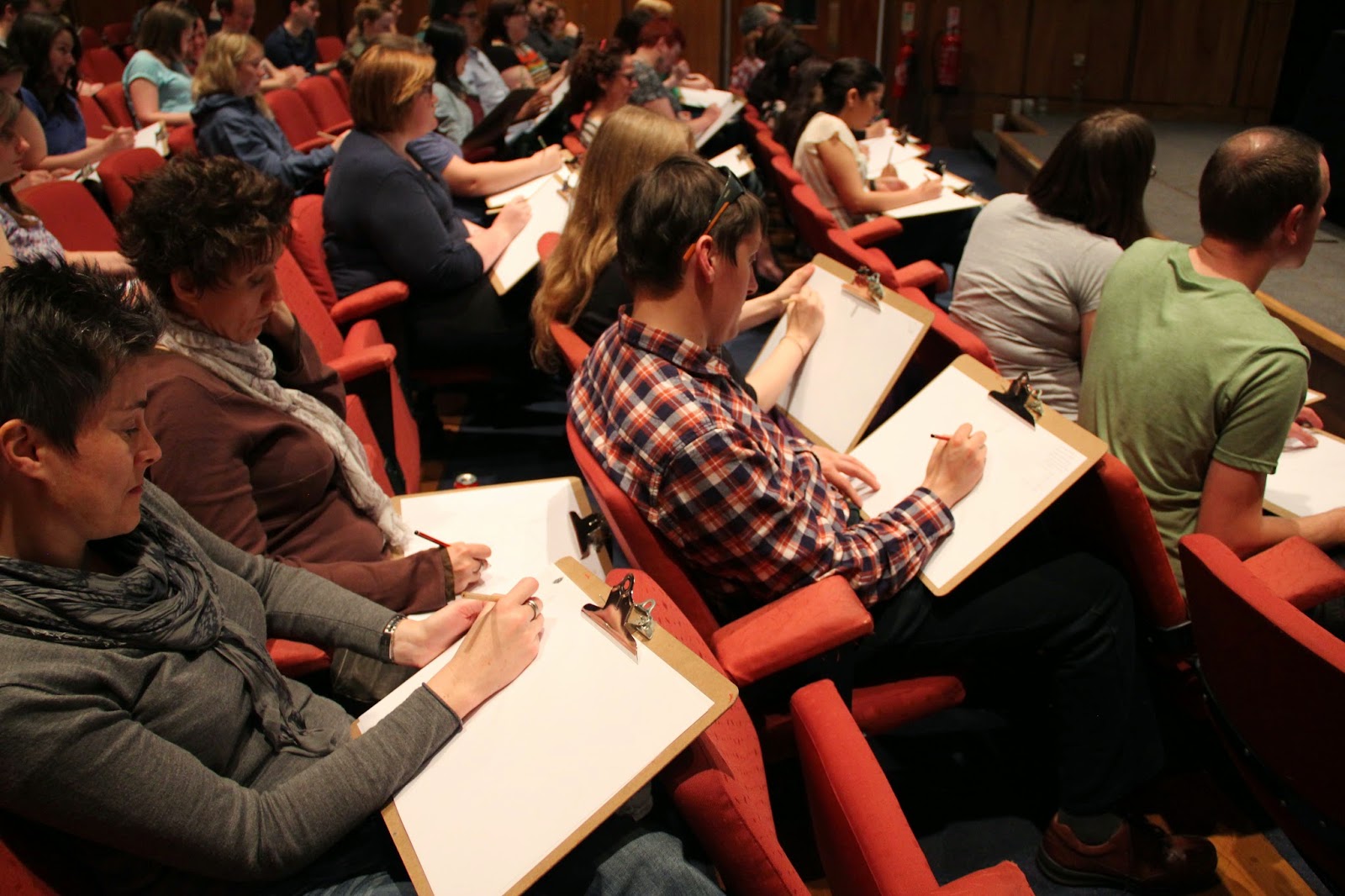 As the clock approached Midnight, it was time for a feast ... of edible insects. Now, this is a subject I've written and spoken about many times, most notably here on one of my vodcasts. It bugs me (sorry) that so much edible protein is scurrying, flying, skittering, crawling and sliding across this planet and yet people are starving. It's madness. Even more annoying is the fact that insects are very tasty when prepared properly. Frankly, I can't see much difference between a handful of salty, crispy mole crickets and a handful of salted crispy wheat snacks. Both taste great. 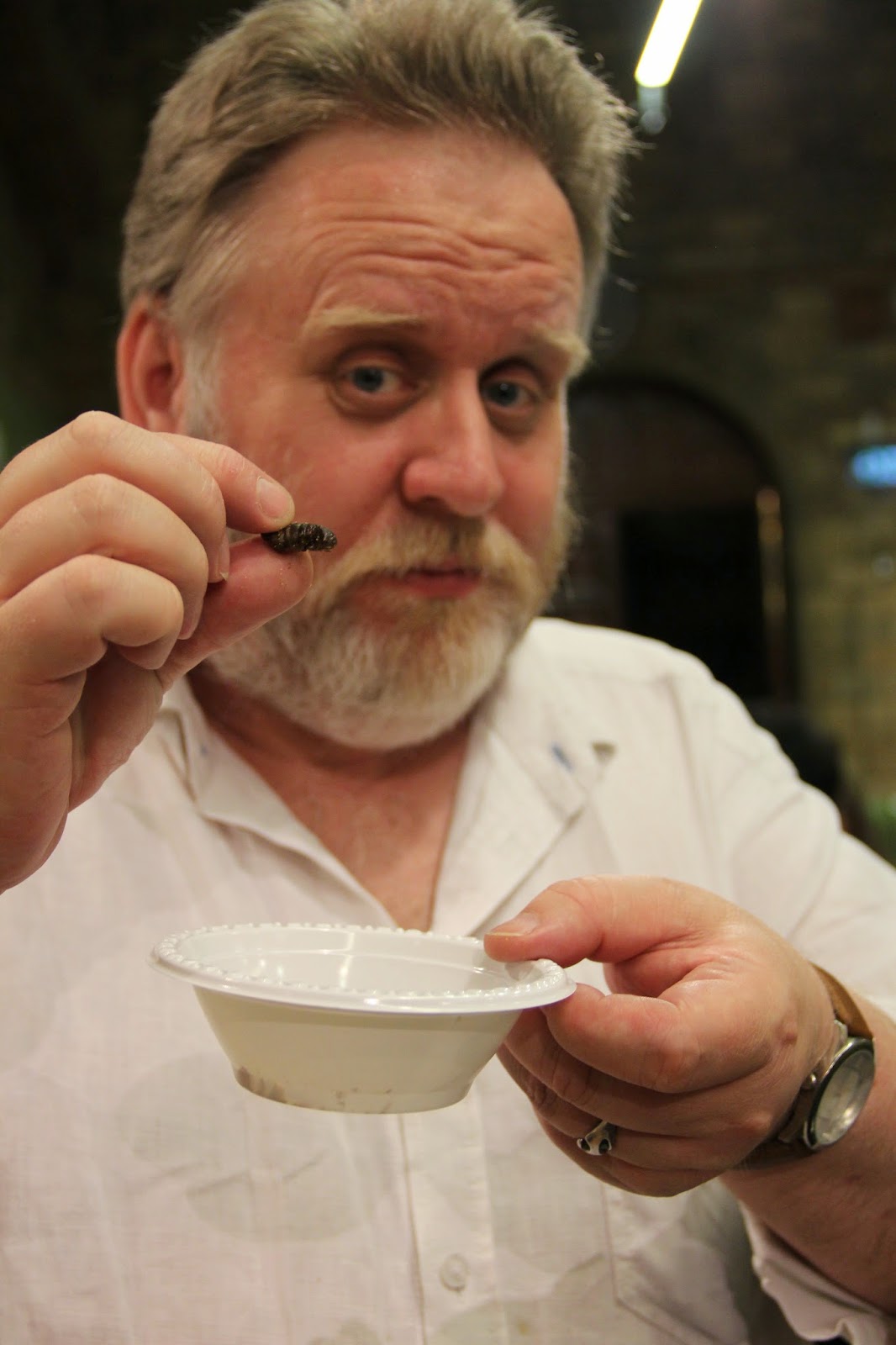 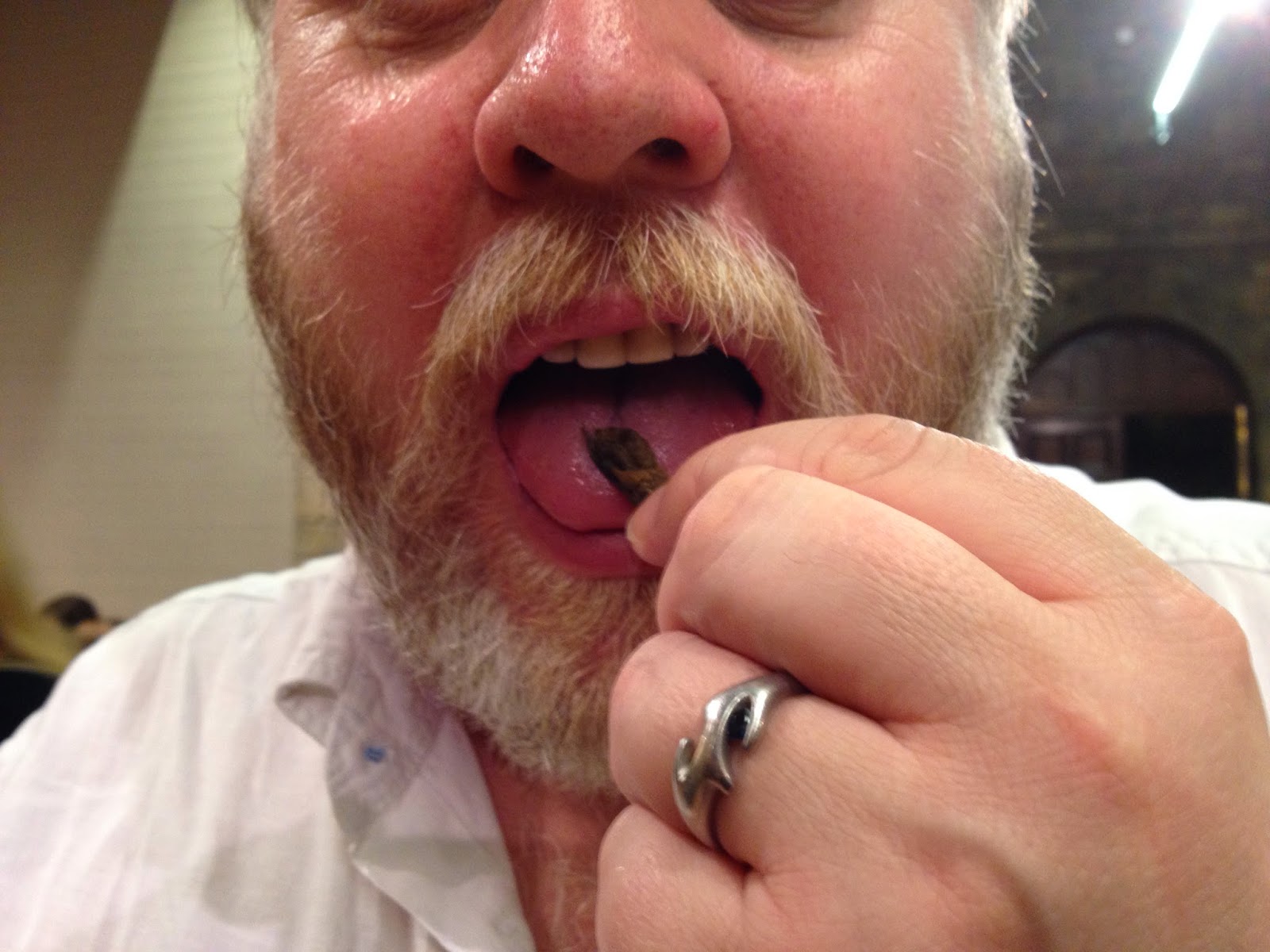 Insects alone (I'm not counting any other invertebrates) make up a huge proportion of the planet's total biomass; ants and termites alone make up over a quarter. There are, at this moment, around 200,000,000 insects for every human on Earth (A recent article in The New York Times claimed that the world holds 300 pounds of insects for every pound of humans). There is no reason why anyone in the world should be hungry.
I do accept that image is everything. The wasabi-flavoured giant Chinese water bug was delicious but I can understand why someone would be daunted by its size and appearance (though the guy in the photo wasn't). But there's no reason why food manufacturers couldn't disguise the insects in some way. Most people looking at a packet of oaksmoked breaded Wiltshire ham don't think 'slices of pig muscle' do they? 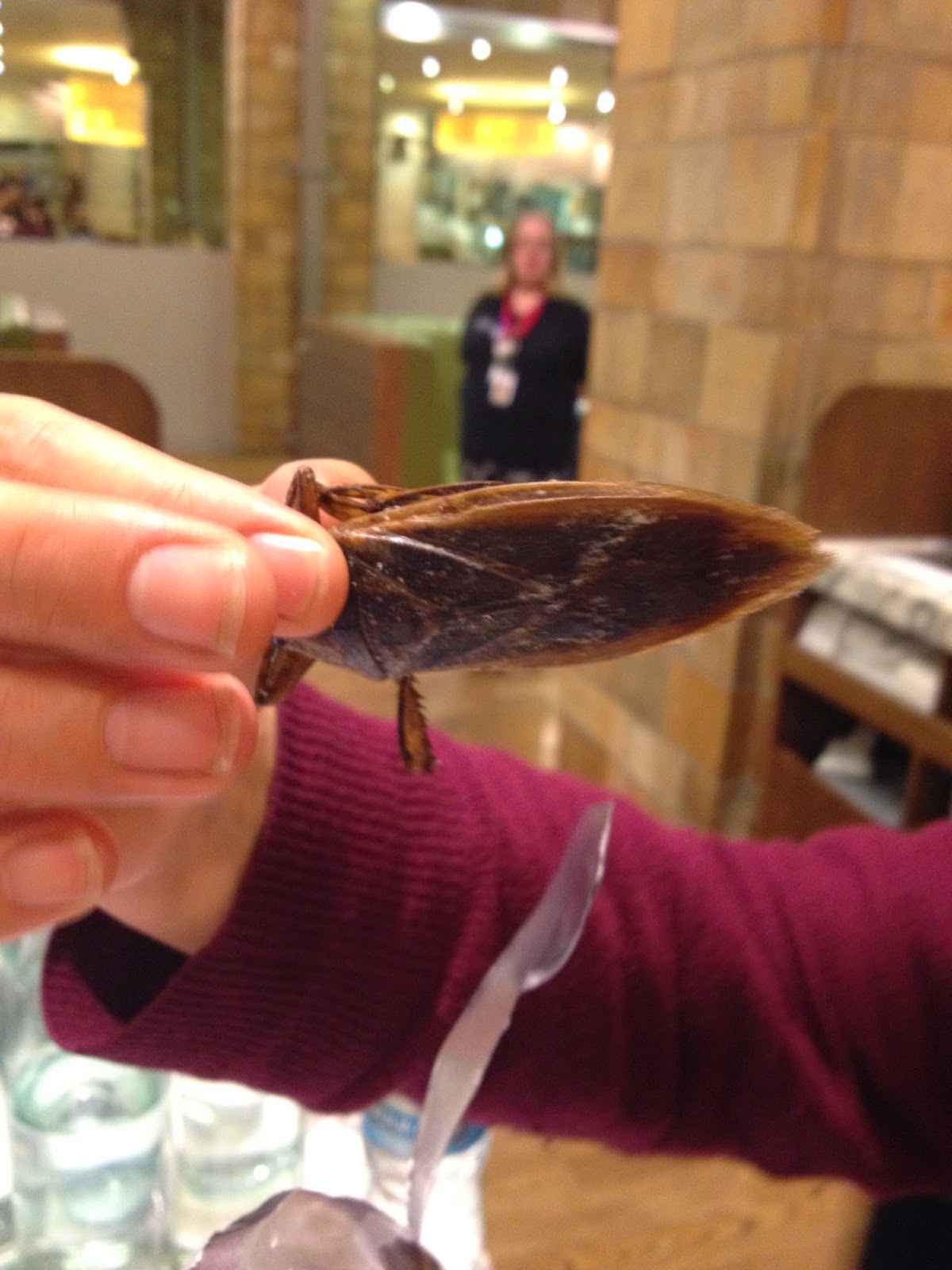 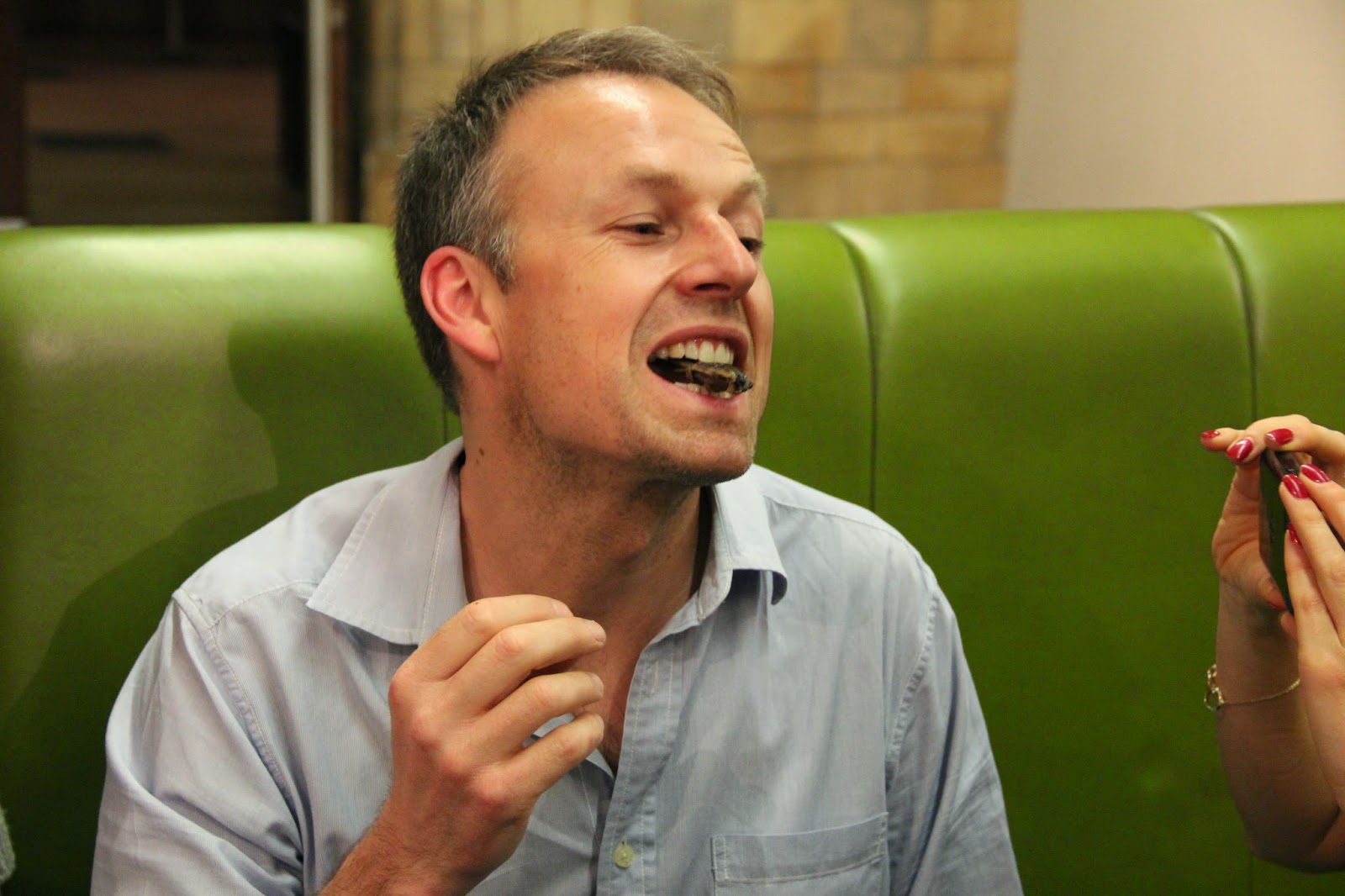 Bug-munching done, it was time to listen to the gentle strains of a live harpist and snuggle down for the night in our sleeping bags and camp dragon onesies. Or, as some others did, watch monster movies all night.

The event ended with a fried breakfast, a fond farewell to Dippy the Diplodocus and gtting out of the building before the hordes of tourists arrived. What a fun event.

Fancy going to a future one? Here's the site. It's not cheap but, remember, you do get a really very good three course meal, breakfast, live shows and other entertainment. It's cheaper than a night at the theatre, a meal and hotel. And you're sleeping in one of the world's most beautiful and iconic buildings.

What's not to love?

Meanwhile ... do follow these lovely people on Twitter: @SimonDWatt and @FlygirlNHM (Erica). Luis isn't on Twitter yet but you can visit his blog.
Posted by Stevyn Colgan at 15:58